Created in 1998 by Craig McCracken and originally called Whoopass Stew, the show features three little girls who were created in a lab where Professor Utonium was mixing sugar, spice, and everything nice. The clumsy professor accidentally adds a fourth ingredient, a can of Whoopass (changed to Chemical X for the main show) which creates perfect little girls who also kick ass. The show’s named was changed to The Powerpuff Girls and the rest is history. The show had the highest rated Cartoon Network premiere of all time, and found an audience amongst young girls and boys. The show aired for six seasons, there was a feature movie, countless items of merchandise, manga, and even a magical girl style anime spinoff called Power Puff Girls Z. 2014 saw a CGI tenth anniversary special, and this year a new reboot of The Powerpuff Girls has started airing.

So despite the fact that the Powerpuff Girls are technically fueled by science, and not some kind of magic animal or power, they certainly exhibit many of the classic signs of a magical girl group. Let’s start with visuals: the most obvious being their specific character design. They are just the same, but just different enough to be distinct characters, and they each have a specific color palette. Blossom (the everything nice) wears red, is typically the leader, and tries her best to upload the virtues of heroism like justice and selflessness. Buttercup (the spice) wears green and is what could accurately be called the jerk of the group. She’s much more likely to start fights and tease the other girls, particularly Bubbles. Bubbles (the sugar) wears blue, loves her stuffed octopus and is the timid and extra sweet one. The interactions between the girls provides as much fuel for conflict and story as the villains themselves. The show passes the Bechdel test with flying, laser blasting colors. 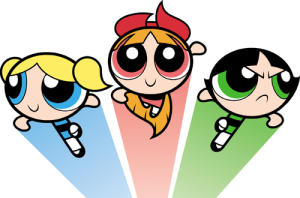 “We will mess you up”

The world that the Powerpuff Girls inhabit also falls in line nicely with the magical girl genre. Now admittedly, a lot of this stuff is your standard action genre stuff, but they parallel nicely. The city of Townsville is populated almost exclusively by hopeless civilians who spend the majority of their time being victims of strange and convoluted plots. They also suffer from the same crippling combination of face blindness and amnesia which is so common in magical girl shows. The very first episode featured a gang of large men putting on Powerpuff Girl costumes and completely convincing everybody that they were the real deal. The villains of The Powerpuff Girls are weekly, wacky, and always bounce back despite getting beaten by three little girls.

Where The Powerpuff Girls really brings out the magical girl spirit is showing who can be a superhero. Blossom, Bubbles, and Buttercup are cute kindergartners who wear dresses and bows, but can also shoot lasers from their eyes and fly. One of the best things the show does is never question this core fact: they are absolutely both cute and powerful and the two are not mutually exclusive. The character of Bubbles is particularly good, as she is quite shy and non confrontational in social settings. Many of the show’s plots focus around Bubbles overcoming and channeling her fears to kick some ass. The other notable female character is Sara Bellum, one of the smartest characters, whose design is a bit…troubling. She’s only ever show from the neck down, just her literally cartoonishly hot body. It was meant to be a joke, but it was a bit of an oddball in a show that celebrated kickass girls (but not necessarily women?). Luckily, I’m not alone in being troubled by this, because the reboot went so far as to remove her from the show. Executive Producer Nick Jennings told the LA Times “We felt like Ms. Bellum wasn’t quite indicative of the kind of messaging we wanted to be giving out at this time, so we sort of had her move on.” The reboot has also notably added a new villain called Manboy, a hyper old school masculine villain who gets a reality check when he tries to call Buttercup “Princess”. As much as removing a female character is a bit of a downer, she was a troubling character, and the show has certainly made it’s commitment to female empowerment known. 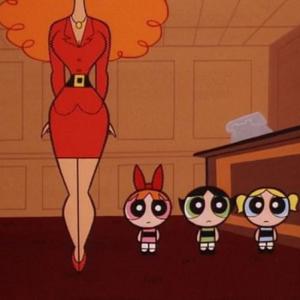 At its core, the magical girl genre is about literally empowering women, and The Powerpuff Girls certainly delivers here. It’s witty writing and design allows it to hold up over time, it never felt dated or awkward to me. Who’s to say whether the new reboot will have the lasting impact of the original, but the Powerpuff Girls are here to stay no matter what.