Back when I first envisioned the concept of this column, there were a few shows that I knew I wanted to do and Cardcaptor Sakura is one of them. I barely remembered anything about it, but it stuck out to me as a particularly iconic magical girl show. And I think I’m not alone in that, since Kym Stonick made my included Sakura in the awesome banner art she made for me. Sakura pops up constantly in magical girl themed material and I would argue that most people would recognize elements from the show. So while watching it this month, I tried to figure out what made it so memorable when I could barely remember the plot. What I settled on is that the incredible design sensibilities of the show are what made it stand the test of time, almost 20 years later. 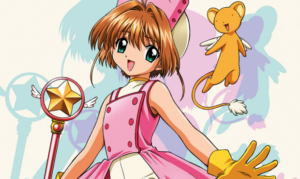 Cardcaptor Sakura (Cardcaptors in the English dub) started as a manga for younger children than my usual shows. Sakura is a fourth grade student who inadvertently releases a book of Clow Cards, each of which holds a powerful and specific power. She must recapture each card and seal it back into card form to become the new master of the cards and keep them from wreaking havoc on her city. The manga was made into an anime that lasted for three seasons. There is actually a new manga coming sometime next year with Sakura now in seventh grade, but not much is known other than that. Cardcaptor Sakura was another victim of heavy cutting and localization when it came to North America. The seventy episodes of the original were condensed into just 39 English episodes, with the tone and content of the show vastly altered. Cardcaptor Sakura is a light show about magic and has an innocence to it. It’s about the adventures of a girl who is still a child but growing and learning that there is much more to her world.  Unlike most of us at that age, she happens to have to deal with powerful magic forces.  The English dub is much more of an ensemble action show, with a dramatic new theme song and much less focus on romance and, in classic 90s dub fashion, any vestige of LGBT relationships were wiped out.

There are two main design features of Cardcaptor Sakura that really make it stand out from the crowd of both 90s animes and magical girl animes: the card designs and Sakura’s costumes. The Clow Cards obviously mirror Tarot cards, both in design and style. The creators were actually somewhat inspired by Magic: The Gathering, which was gaining popularity in Japan at the time. The cards are mostly themed around elements like The Firey or The Windy, but there are others like The Jump, The Sword, and The Return. Each card is unique and intricately designed and executed within the show. The cards are the real star of the show, I found myself waiting anxiously each episode to see what form the card would take. In turn, Sakura’s uses for the cards are creative and interesting, allowing her to tackle her encounters more as puzzles than fights. 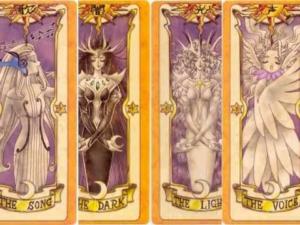 The second element of the show that shines is Sakura’s costumes. Sakura’s best friend Tomoyo is her biggest cheerleader from long before she becomes the Cardcaptor. In the original Tomoyo is actually in love with Sakura, but never pursues it strongly because she knows Sakura doesn’t feel the same way. She is always the most excited to see and support Sakura, and she also happens to love dressing Sakura up in costumes for her card hunts. Tomoyo films Sakura chasing and capturing the cards in an array of outfits that she sews for her. It’s a running goof that Sakura isn’t particularly pleased with these outfits, but does it to humor Tomoyo. The outfits are incredibly designed, each one is different but with a fairly consistent visual theme of wings, round shapes, and a lot of capes. Each episode becomes a unique visual treat, with the different cards and costumes providing enough variety to break up the fairly standard monster of the week format. Plus, it soothes the part of my soul that really wants transformation sequences in every show ever. 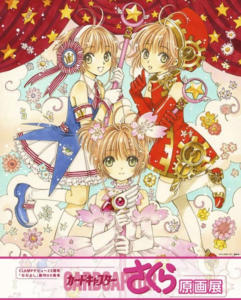 Cardcaptor Sakura is also notable for it’s use of LGBT relationships, at least in the original and not the dub. The creators actually have said that what they wanted to do is show different types of relationships and love, which of course includes LGBT ones. The amount of unrequited love going around is kind of ridiculous, with every single main character having some sort of secret crush on another. Tomoyo loves Sakura who loves Yukito who loves Toya, and Meilin loves Syaoran who also loves Sakura. It’s all very innocent romantic love, with sex basically playing no part in the show, what with most of the characters being 9 year olds. There’s an excellent bit in the third season where Nakuru, the human alias of Ruby Moon, explains to a number of characters that it doesn’t really matter if she’s into girls or guys since she isn’t technically a woman or a man. It’s a nice little bit of genderfluid representation that you don’t see in a lot of kids shows even now.

The monster of the week plot structure can get fairly stale after a while, although things definitely get mixed up a lot come the third season. But the non monster of the week episodes are consistently interesting, well written and advance the plot in spades. That coupled with the fantastic visuals make the show interesting to keep watching, especially if you’re like me and never saw the original.