The My Little Pony CCG has a new expansion coming out in about a month: Marks in Time, which officially debuts in May. Enterplay has been spoiling cards left and right on Twitter and Facebook, and they’ve published a few features on Equestria Daily, too. In the run-up my friend Niko White also wrote an article discussing the upcoming rules change (the removal of the first-confront bonus) that also goes live with Marks in Time.

Today I get to join the fun, too, with not one, not two, but three brand-new cards. First, I’ve got two new cards from a cycle you (may) already know about. Then, I have a sneaky little snake that’s sure to be a hit for Critter decks everywhere. Let’s get to it!

(Full disclosure: I’m an external playtester for the MLP CCG and helped playtest cards from Marks in Time.)

It’s What My Cutie Mark Is Telling Me

If you’ve seen any Marks in Time previews so far, you’ve probably seen the set’s marquee mechanic: Cutie Marking. So I don’t see any reason to make you wait for my first two preview cards: world? Meet filly Rarity and filly Pinkie Pie. 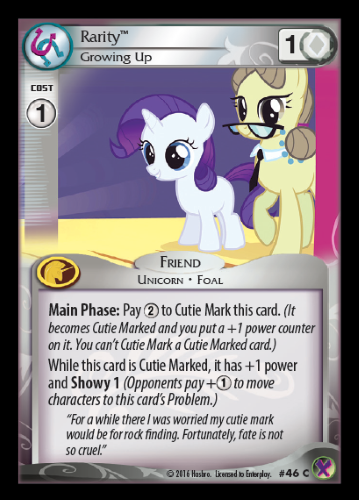 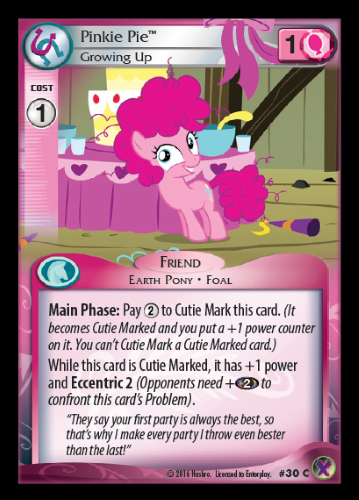 These cute little foals are part of a common cycle: each of the Mane Six gets a “Growing Up” card that shows the character before they got their Cutie Mark. You can see the Rainbow Dash and Fluttershy cards on Equestria Daily, if you haven’t already. Since I had a hand in playtesting them, I figured I’d give a little “behind the scenes” peek into the design process for the Cutie Mark Cards.

The design team’s vision was that Cutie Marking should feel appropriately momentous. Friendship Is Magic treats Cutie Marks as a big deal. Getting your Cutie Mark is an event, and the design team wanted the game to reflect that: it should be a significant investment, that also comes with a significant reward. 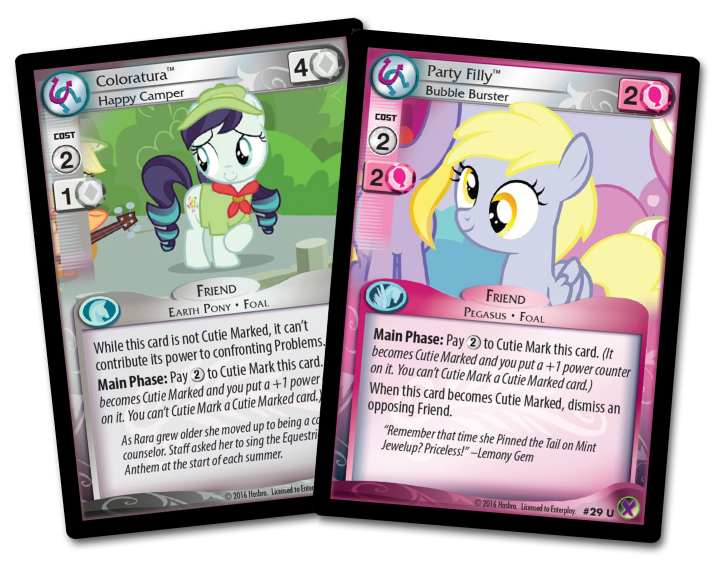 For gameplay reasons, it’s best that all the Cutie Mark cards work the same way. The designers can then make each card unique by varying the abilities it has before it’s Cutie Marked, and varying the benefits it has afterward. Ideally, each card presents a tiny little before-and-after story that conveys a sense of growth and accomplishment. 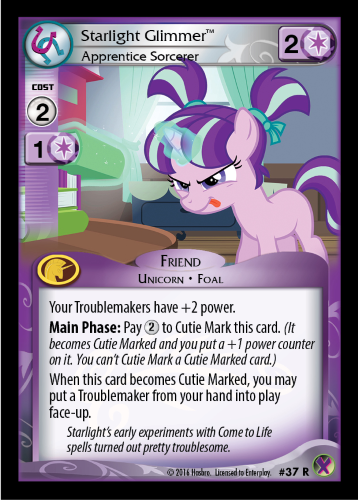 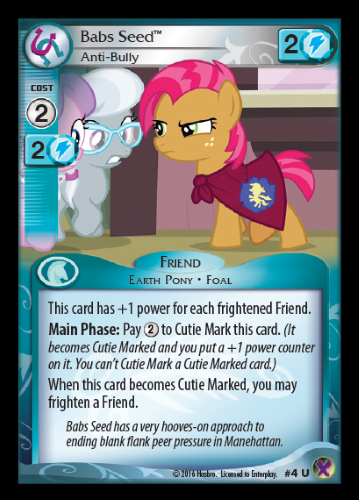 That also means Cutie Mark cards have to stand on their own both before and after they get Cutie Marked. It makes sense that Cutie Marking a Friend has to be a big improvement to be worth it; 2 AT is a lot to spend, especially when you could just play a different card from your hand.

On the other hand, if the card is irrelevant before you Cutie Mark it, it feels a bit pointless, like you aren’t getting your full card’s worth until you pay the extra AT for the Cutie Mark. At that point, there’s little reason not to just make the card cost more and have more power. 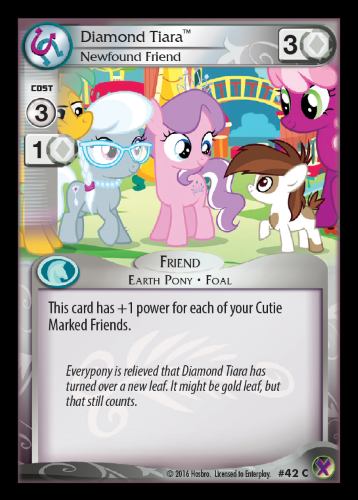 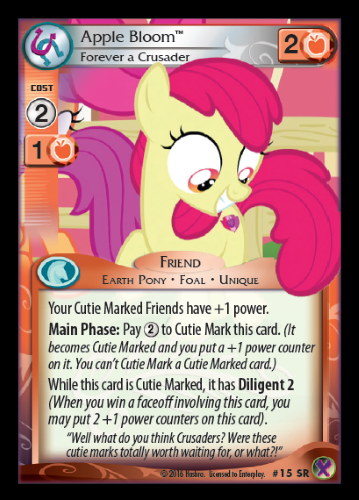 Designers can force players to notice a mechanic, if they need to. Consider cards like Diamond Tiara, Newfound Friend and Apple Bloom, Forever a Crusader. These cards care about Cutie Marks, and tell you so pretty loudly. They might even compel a player to put otherwise lackluster Cutie Mark Friends in their decks. But this feels a little tacked-on, and players notice. It’s much better design to make sure a Cutie Mark card is reasonable before it’s Cutie Marked, and that Cutie Marking it feels like a reward worth paying for. 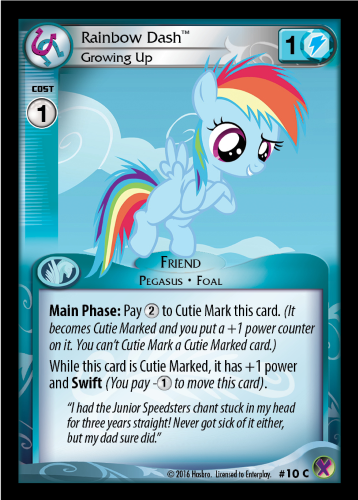 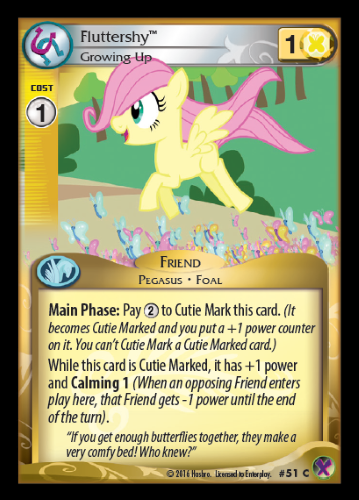 That brings us back around to the Mane Six, Growing Up cycle. The cards all started as 2-power Friends that cost 2 AT, which picked up an extra point of power and an extra ability when Cutie Marked. (Originally, Friends didn’t all get a +1 power counter when Cutie Marked, which made the mechanic a little hard to parse across multiple cards.) We playtesters liked the simplicity, but Cutie Marking didn’t feel like enough of a payoff. 4 AT for 3 power isn’t an especially good rate; and, moreover, we’d seen lots of 2 AT 2-power Friends, so the base version of the card didn’t feel unique.

Working with playtester feedback, the developers hit on the version you see here. These played much better. The 1 AT 1-power Friend is a frame we haven’t seen much since Premiere, so it felt special. (Plus, it really makes the cards feel like they’re kid versions of the Mane Six.) Meanwhile, 3 total AT for 3 power is also an attractive card. In playtest games, Cutie Marking the Mane Six felt exciting and powerful. The upgrade was meaningful, and more importantly, it captured the feel of helping your Friends grow up and unlock their full potential.

I hope you all enjoy playing with Cutie Mark cards in Marks in Time. They were a blast to playtest, and thanks to the hard work of the dev team, they wound up in a really fun place.

Next up: a card for all you Critter lovers! As a Critter fan myself—ever since I put together Rise and Shine and Fast Food in my first draft deck—I’m pretty excited to get to show this card off to you for the first time. Give a cheer for Battlesnakes, Hissy Fit! 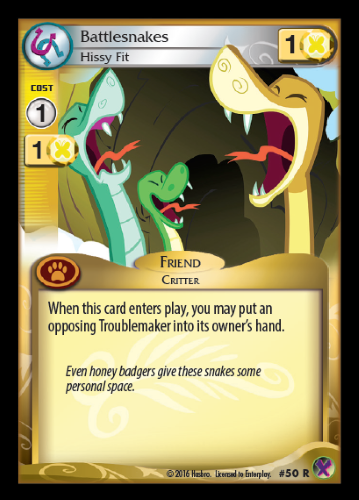 The snakes are cheering, that’s for sure.

If you’ve ever played a Critter deck, you know that Yellow can have some issues busting through Troublemakers. Yellow doesn’t get the fast movement, out-of-turn confrontation, or bypassing abilities other colors have. Instead, Yellow usually has to overpower opposing TMs. Often, this means playing or moving Friends to the TM’s problem during your Main Phase and hoping that holds up. Good TM decks, which defend their Troublemakers with forced movement and frighten effects, can really punish those plays.

Yellow does have a few tools available to fight Troublemakers (Princess Celestia, Smite Makes Right; Princess Celestia, Bane of Evil; Splash Attack). But they tend to be poor fits for Critter decks. They can be narrow. They’re pretty expensive, which is a tough sell for a deck that’s trying to keep its AT cost as low as possible. Plus, they’re not Critters. Critter decks tend to rely on Fluttershy, Friend to Animals as a high-powered Mane that shores up the naturally low powers of their Friends, so every non-Critter card they include comes at a cost.

Left with few other choices, it’s natural to turn to the nuclear option: 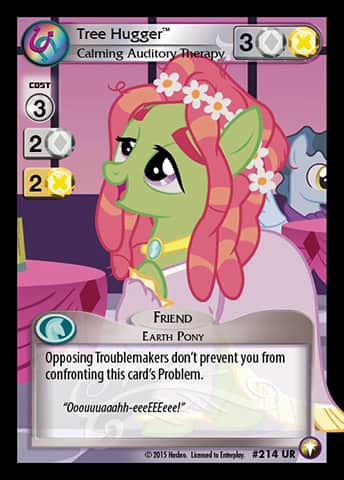 Tree Hugger’s not a Critter, but she’s so powerful she’s worth going off theme. Unfortunately, she can sometimes be a little too good. “Turn off Troublemakers” is fair in a tournament, but it’s less good for games with your friends. It’s a cool deckbuilding challenge to find just the right card to win fun games. It’s less fun to find a card that blanks half your opponent’s deck.

I’m excited to try Battlesnakes, Hissy Fit as a fun, fair, interactive option to give Critter decks another way to dodge Troublemakers. Often, buying just a turn or two—exactly what Battlesnakes gives you—can put you far enough ahead in points to close the game. As a cheap Critter, Battlesnakes is easy to sneak into a big turn, but can also be part of your fast Critter openings, if that’s what you need. 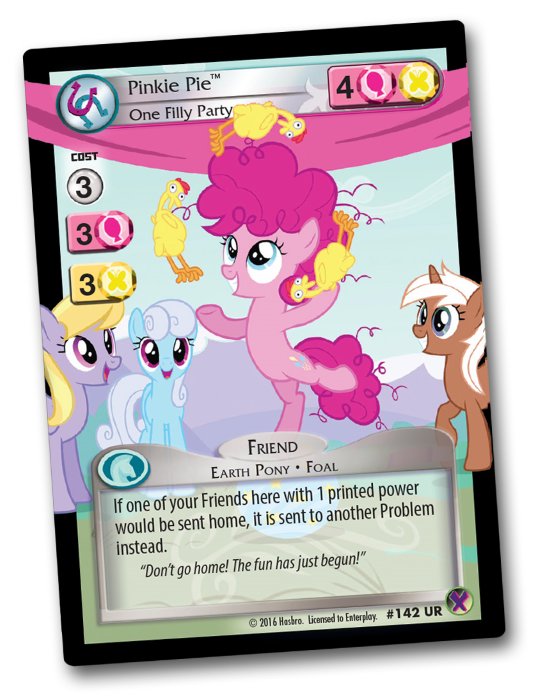 Plus, as a straight Yellow Friend, Battlesnakes can fit into all sorts of new Critter decks beyond your typical Yellow-White Cratus/Tree Hugger decks. In particular, I’m excited to try them alongside Pinkie Pie, One Filly Party in a Yellow-Pink tokens deck. Critter tokens and Earth Pony tokens together? I’m in.

Or maybe Critters aren’t quite your speed? Marks has you covered there, too. 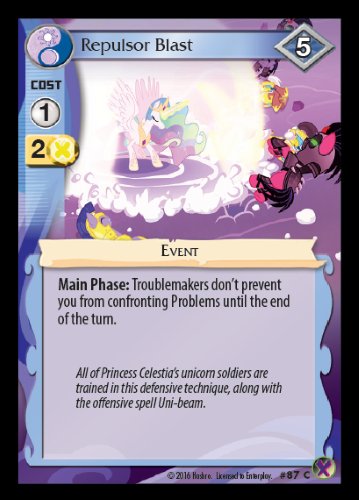 Repulsor Blast is essentially a one-shot Tree Hugger, which can buy you a critical turn to get ahead or stay ahead. Even better, if you can force a double-face off (a fracas, if you will), you can refresh problems and get rid of the Troublemaker for good. To help, Marks also includes cool new Dilemmas to give additional avenues to confront multiple Problems in a turn:

Here's another alternate timeline that appears as a Dilemma card in #mlpccg Marks in Time! pic.twitter.com/teJNXNWuZj

Suffice to say Yellow is going to get some cool new toys when Marks in Time drops in May! I’m really looking forward to it.

I hope these Marks in Time previews are just as exciting for you as they are for me! Stay tuned to the MLP CCG Twitter account and the Enterplay Facebook page for more preview cards as they come out, and sound off in the comments to let us all know what cards you’re most excited to get your hands on.