My first introduction to GRRM was via Game of Thrones, which I quickly fell in love with the ability to juggle multiple characters and varying storylines. So when I got the chance to read and review Nightflyers, a collection of science fiction short stories, I was ecstatic. One of the greatest storytellers of a generation doing what he does best in my favorite genre to read.This collection was originally published in 1985 but is being revived this year, to coincide with SYFY is turning “Nightflyers” into a series this winter.

The first and titular story, “Nightflyers,” is about a group of academics seeking the Volcryn. The first moment the crew feels something is wrong is when the pilot and owner, Road Eris, refuses to meet them in person, preferring to interact with them via hologram. When Thale Lasamer, the telepath begins to feel an incredibly amount of the dread, he’s drugged to suppress his abilities and creepily is the first to suffer the terrors of The Nightflyer. The entire story keeps the reader in a constant state of uneasiness. The reveal of what’s exactly behind all the occurrences will leave the reader shocked in a way that only this science fiction master can. 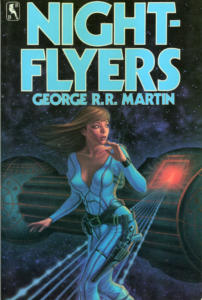 While reading “Nightflyers”, I immediately felt the same constant dread that I did watching the Final Destination and Resident Evil movies, in the sense of starting off with a group of characters and watching them get picked off one by one or two. It’s right on time as our society is moving more into an automated, AI friendly world. It’s the epitome of suspense with a dash of horror. The importance of trust and acceptance courses through the narrative. Relationships are constantly tested and exploited by the force on The Nightflyer.

The plot progresses quickly which affects the individual characterizations. Though the author is clear about each character and their roles, I found myself having a hard time hearing the varying voices. Often times the author describes the characters as one group.Even the Volcryn, the alien species of interest, are described as an entire entity.

“It’s not a them, Karoly. It’s an it. Alive, Karoly, and quite mindless, I assure you.”

t was really the character Melantha Jhirl who piqued my attention. The lack of diversity in science fiction has been extensively discussed in recent years. To see that GRRM featured a character described as having “coal black skin”, I was excited but slightly apprehensive. The idea of a woman of color not only exploring space, serving as a second in command, brought Gina Torres in “Firefly” to mind. Jhirl is an improved model human. She was crafted to be stronger and more intelligent. She is also sexually insatiable, which made me a bit uneasy. Not because a woman was following her sexual desires, but because sadly in so many narratives this is the only purpose given to women of color, especially black women. But I must admit that I saw this character the as an individual. From the physical description to dialogue heavy scenes, there’s a deep sense of what Melanthra wants and how she’s willing to get it.

For much of the story, the voice of the narrator is quite cold and robotic, an exquisite pairing with the poetic prose this author is known for:

“The stars were cold, frozen points of light; unwinking, austere, more chill and uncaring somehow than the same suns made to dance and twinkle by an atmosphere.”

GRRM is unequivocally a master of science fiction and Nightflyers is an incredible expression of this fact. The characters are introduced organically detailed and methodical. The plot moves quickly without feeling rushed describing what I imagine space travel to be – fast as light yet monotonous from day to day. Though dialogue sometimes seem stiff and robotic, there are multiple examples of poetic prose that captures the reader. This story wasn’t only terrifying but such a fun ride and the upcoming show has a lot to live up to.

I remember finishing this story thinking, “What a ride, how can these other narrative keep up?” Not only did they, but they offered completely different tastes during their progression. There are five other stories in this collection: “Override,” a man being betrayed by his close friend; “Weekend in a War Zone,” in which a young man tries to up his cool points by going to a violent retreat with a frenemy; “And Seven Times Never Kill A Man,” which is about human settlers on another planet attempting the conquer the native species due to some Chosen complex; “Nor the Many Colored Fires of a Star Rising,”which follows a team of astrophysicists and space explorers monitoring the creation of a black hole; “A Song for Lya,” about two gifted individuals hired to investigate why humans on a planet are converting to the local spiritual experience. 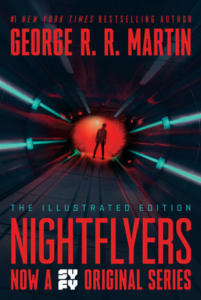 It seems all the stories are within the same universe though the chronological order is a little unclear. But this is okay because the author gives enough nods to the universe in each story to acclimate the reader. Either the mentioning of a particular planet and/or alien species the reader has encountered in earlier tales. These stories are rather short, though “And Seven Times Never Kill Man” felt the longest, I believe due to the heavy biblical writing style.

“And the pale child came and stood before them, with His great sword in His hand, and in a voice like thunder He rebuked them. ‘You have been weak children,’ He told them, ‘for you have disobeyed. Where are your swords? Did I not set swords in your hands?”

Passages like this haunted me. The beautiful prose in this story almost completely overshadowed the plot progression. I found myself merely jumping from exposition to exposition though I wasn’t actually skipping any passages.

Some characters are given a lot of time to breath and others aren’t. This doesn’t mean the author was lazy or had an oversight. There’s just shorter, crisper moments of description to give the reader what they need in a short period. Even the description of darkness in “Nor the Many Colored Fires of a Star Rising”:

“Then he could see and sense the depth of the darkness, he could feel the cold grip of infinity, and he knew, he knew, that if he traveled away from the star ring he would fall forever through empty space.”

This author is so skilled that he can characterize absence. He understands personification on an intimate level.

Community. Belonging. Things each human craves in their own way. A desire to be connected. Plugged in. GRRM touches on this concept decades before the invention of social media. What he does in his collection is what every great speculative fiction writer includes. The human essence. The human truth is what anchors readers when they’re reading about ancient aliens, dead men being used as laborers and talented beings being sucked into cult practices. It’s the desire to be apart of something greater. That is what this collection is. Something great among the many narratives that exist within this genre.

Nightflyers will premier December 2, 2018 on SyFy.