Out of the Blue is Sophie Cameron’s debut novel about how the world continues after tragedy. It isn’t a morbid or cynical social commentary but a beautiful matter of fact. The novel is written in first person from the point of view of protagonist Jaya, a teenaged Sri Lankan girl from Scotland.

The story begins with Jaya, her younger sister Rani, and her father going to Edinburgh to see if they can find a Being. These entities have been falling from the sky at alarming speeds, too fast to survive their landings. At the start of the book, these occurrences have been happening for a few months. The family rents a flat and the beginning of the summer is spent mostly watching their father use the falls to deal with the trauma of losing his wife, their mother. Though Jaya is the skeptic of the family,, she’s the one who witnesses a fall and the first fall that a Being has ever survived. She hides the Being in an empty flat, feeding it teacakes and playing the radio for it. While she’s talking to Calum and Allie, a set of twins, one of whom she finds fascinating, she discloses that she actually has a Being. As a team, they name it Teacake. The rest of the book is a journey through trust, acceptance and growth. 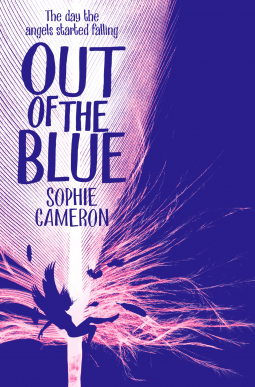 The work is an original take on a familiar concept. City of Angels and The Preacher’s Wife both feature angels falling from the sky. But what’s interesting about this narrative is the fact that Teacake is never able to fully communicate vocally. There’s no explanation of God or heaven. Teacake just is. And there’s a lot of this “just is” in this novel.

The introspective moments of the protagonist feel real, feel in her voice instead of the narrator’s. They hit hard in simplicity.

“I can’t let that happen. I have to help her. Not because I found her, not because it’s my destiny or any crap like that, but because she is, quite obviously, a person. She deserves to be treated like one.”

This young adult novel with a hint of celestial has heavy magical realist undertones but doesn’t flirt with absurd. I believe that pairing this them and tone allows the reader to feel like things are normal but not, which is how Jaya and Allie, her love interest, exist. Allie has cystic fibrosis (a progressive genetic disease) but chooses to continue enjoying life. But don’t think this is one of those sweeter than southern tea YA novels. Her condition isn’t a focus but definitely is a factor. Cameron neither shows life has a perfect pretty polished world but neither as a horrendous collection of gloom and doom. There’s a wondrous balance as many of us may remember late teenage, young adulthood years to be.

“But the weeks trickled on, and though Beings kept falling, nothing else happened. The sky didn’t cave in. The earth didn’t split in two. Jesus didn’t rock up on a golden chariot, ready to whisk away the good and the pious to the afterlife. Neither did Marek’s extraterrestrials. For most people, there’s only so long panic can hold out. And after so much madness, we were all desperate for monotony. So the airports reopened. Buses started running on time.”

At any given moment, something can happen that will cause an individual’s life to pause, even though life in general continues. Friends, co-workers, associates will go on about their day. Not because they’re mean or uncaring but because it isn’t them. I was floored by Cameron’s choice to have the falls occur and after a panic having people go back to their everyday lives. It reminded me of the quote “Be kind because you don’t know what battle someone is fighting.” I felt this was a reminder of that. To understand that at any given instance, when life is status quo, someone else’s could be at a halt.

I must commend the author for her portrayal of the protagonist. Jaya is a character of color with depth and warmth. Diversity is constantly being discussed in art, the importance of representation and what that means exactly and how an author apart of one group could write from the point of view of others. Jaya isn’t a stock character, Cameron wasn’t afraid to mention the character’s ethnicity and handled the conversation delicately and efficiently. I think many authors could learn from how she portrayed this character. I found myself having moments of raw emotion while I followed her journey. Though I myself am not Sri Lankan, I connected with the protagonist on a emotional level. I understand her pain and confusion and wished for resolution for her.

There aren’t any stock characters; any character that feels familiar is due to their existence in a reader’s personal life. There’s the father obsessed with work, the younger sister who loves and admires Jaya, the healthy twin brother who’s always reminding Allie to take it easy, the ex who seems like the “one who got a way,” and the loving parent who passed away too soon. But the author has woven such a tapestry of human interaction you can’t help but care about each and every one of them.

“He natters on and on, getting so caught up in his tales that he misses the change of the traffic lights and a pissed-off lady in a 4×4 beeps her horn at him. Rani nods and “mmms” and “uh-huhs” along. I’m pretty sure that even she, eleven-time winner of Daddy’s Girl of the Year, can’t actually be interested in the levels of linoleic acid in the Beings’ fingernails, but she puts on a good act.”

Cameron is incredibly skilled at using such short passage to paint entire familiar universes. The writing is organic, it felt like the author just set out to tell a great story while focusing on the human truth and she totally knocked it out the park.

This novel was a beautiful experience. From the characters to their dynamic to touching on human truths, this experience reminded me of the wonder of the world while accepting realities. People pass away, lovers leave and the sky may actually fall but there’s also love and beauty in these moments. “Out of the Blue” is a blueprint of acceptance and growth; an ode to letting go and embracing the new.