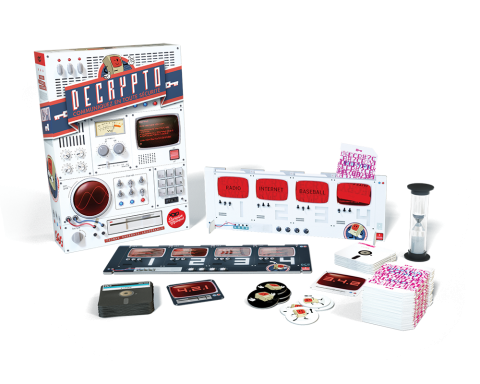 If you’ve played boardgames in the past 5 years, you’ve almost certainly heard of Codenames. The fun party game all about being spys and trying to communicate codenames to your team without leading them astray. Well there is a new game in town that is similar, but with more depth and challenge.

In Decrypto you have two teams. Each team has a set of 4 words corresponding to 1-4. Each round, one player receives a 3 digit code, 1,3,4 for example. It is that players job to give clues about what the code is, in order. If your team gets the code right, great, if they get it wrong, you’re one step closer to losing the game.

Now what makes Decrypto feel more thematic than Codenames, is the other team is listening. They also get the clues you are giving to your team. They also make a guess as to what your code is, they just don’t have the words in front of them to help, decrypt, the message. As the game goes on they have more and more information about the words your team has. All the while, you are doing the same thing to the other team.

You are trying to figure out what salt and Julia Styles has in common so you can link the next clue to it. If you successfully intercept their code twice, you win, if you fail your own teams code twice, you lose.

It’s as simple as that. It creates very tense moments as you try your best to give the most obscure unrelated clues possible, to not give it away. It’s not as light as Codenames, but its definitely going to replace it at my boardgame nights for the foreseeable future.