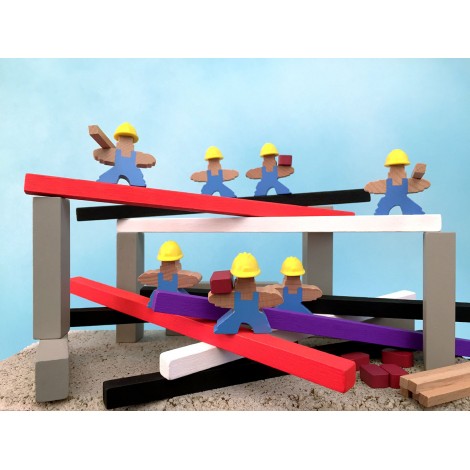 Men at work is the latest dexterity game from pretzel games and we got to check it out at PAX unplugged. At first glance, it’s similar to other dexterity building games such as rhino hero. But what really sets Men at work apart is the complexity of the building. Instead of just trying to build higher and higher, you have a wide variety of building actions, that propose new challenges every game.

The game consists of girders, supports, beams, bricks, and workers. After the initial structure is set up you flip a car from the deck. The back of the next card shows what you must do. If it shows girders, you must use a girder of that color. If it shows a worker, you must do the worker action. The back of the card you flipped gives you the instructions for what to do. So it might be say, “place touch the same color.” This means you place a girder and it must touch the same color. There are a dozen different instructions for placing girders and this combined with the back of the next card means the combos are endless.

At a certain point in the game the foreman shows up. Once the foreman is out, if you place the highest structure on the building, you get a worker of the month award. Win three of these and you win the game. But you have to be careful, if you drop something 3 times, you’re out.

This is the other way the game differentiates itself. Knocking down stuff doesn’t end the game. Instead the next player has to clear the site before they take their turn. It just adds another opportunity to mess things up.

Overall, I had a ton of fun with my time with the game and am eagerly awaiting the chance to have it home.