If your favorite band created a board game, what would that game look like? Would it be a deck builder or competitive resource style game or maybe something totally new? Well if your favorite band is The Decemberists, then I can tell you exactly how that game would look. Illimat, created by Keith Baker with illustrations done by Carson Ellis,  takes several different game elements and includes a to die for aesthetic into a game you won’t want to stop playing. 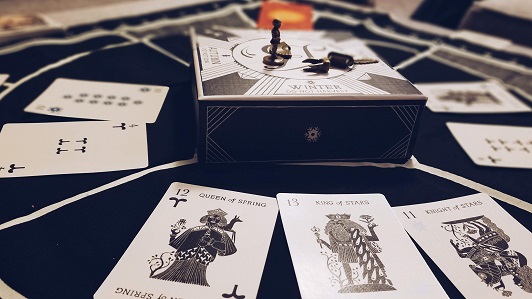 Illimat is played with 2-4 players and takes typically about 15-45 minutes (most games I have played come in around 30-45 minutes) to play. Each player starts by laying out the mat, a black cloth with white markings that divide the board into sections or “fields”. Then four luminary cards, which look like amazingly designed tarot cards, into each of the board’s corners face down. Then three cards are sown (laid face up) in each section before the game begins. In the middle of the board, the bottom section of the box is used to keep track of the seasons. During gameplay, each player can either lay down a card (sow), take a card (harvest), or create a stockpile of cards. Cards can be picked up as long as they are the same as the card the player has and/or they add up to the card the player has. For example if a section has a 4,6,10; and a player has a 10, then that player can collect all the cards in that section since they either add up to 10 or are the same card. Once a section is cleared, the player takes an okus token and turns the luminary card face up, putting the effects of that card into play. Each player continues until there are no more cards, at which point the game concludes and each player tallies their points. The player to first reach 17 points wins! 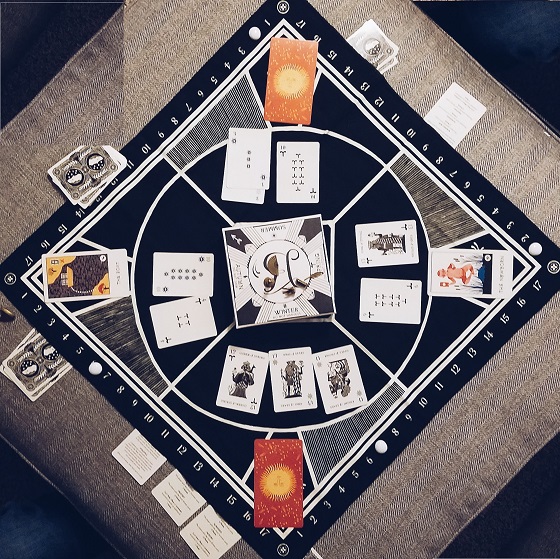 Illimat is seemingly a very easy to learn and straight forward game, allowing for anyone with an interest in it to have fun. However, there are several ways to turn the game into more of a strategy type game with several small rules. The board sets certain restrictions on what actions can be taken in specific fields. For example, harvesting cards is not allowed in Winter; so if I have a card that I cannot play but I don’t want another player to have it, I can discard it into the Winter section and keep it temporarily safe. Then later on, I can use another card to switch the seasons, allowing me to collect my card again. In this way, the game can become more complex and competitive for those who enjoy playing games in that way.

Aesthetically Illimat kills it. The luminary cards are the same size and shape of tarot cards and have a similar type of imagery. The cloth board is such a nice touch instead of the regular warped cardboard boards of other games. While there are okus tokens provided, the rules outline that the owner should replace those with tokens of their own that have meaning. I have added in a miniature porcelain teacup to mine and it honestly takes the game to another level. There is so much thoughtfulness and just overall attentiveness to the details of the game, it makes it seem like a handmade craft and not a mass produced board game. Since finding Illimat, it has quickly become my favorite games and one that I love to teach people how to play. If no one in the group knows how to play fear not! There is a video link that will walk new players through all the steps with very easy to understand directions. Everything and every detail of the game made me fall in love and I hope for more from Keith Baker and The Decemberists in the future! Illimat is available for purchase on their website and also on Amazon.