Thank you so much for agreeing to answer some questions for Geekly, Inc.! I loved The City in the Middle of the Night, and I know that our readers are eager to learn more about January and your processes in creating it. To start with, let’s talk about January, a planet locked between boiling sun and freezing darkness, and the two major cities that exist in the sliver of twilight between two extremes. Xiosphant and Argelo represent two very different ways of dealing with time, Xiosphant officially regulated and Argelo chaotically personal. Do you consider yourself (or your writing habits) a citizen of either city? 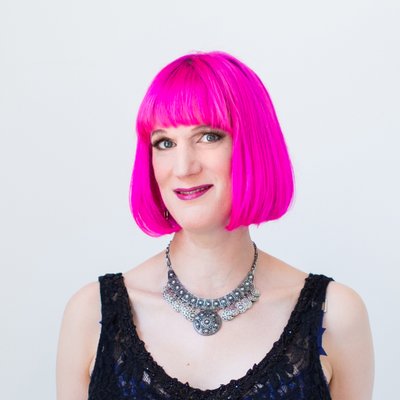 I am definitely kind of a citizen of Argelo, in that I often stay up way too late and then sleep in, or sometimes work at odd hours and take naps. But in another way, everyone on Earth is a citizen of Xiosphant because we all have this huge non-stop reminder of what time it is, with the sun moving around on a regular schedule and keeping us aware of morning and evening. Even if I choose to sleep until noon, I know that it’s noon and I know how long I have until the sky darkens again. We can’t escape from this awareness of our relation to the sun, all the time.

“Everyone in Xiosphant was weirdly polite, just as long as you pretended all their made-up stuff was real.” I love that line. Humans love to pretend that their collective fictions are irrefutable facts, but this book does great work undermining all kinds of assumptions. Time—nature—gender—humanity—they all turn out to be far less stable categories than we might initially assume. Did you set out to challenge any particular notions, or did it happen organically?

I feel like this is the great strength of speculative fiction in general—by taking characters to another world, or a possible future, or an alternate version of our reality, we get to shine a light on how strange our world and our preconceptions really are. You really only have to read history for a while to realize how much of what we consider “normal” was vastly different not too long ago, and how much of it was invented by people and then pushed on the rest of us. This was my first time writing a whole novel set on another planet, and my biggest concern was to make the world feel immersive and plausible and lived in—which means, in turn, that everything that’s weird and different to us has to feel normal and “regular” to the people living there. So that inevitably means that you’re showing indirectly how arbitrary our own “normal” stuff is.

Is there any character you most identify with? Like best?

I have a LOT in common with Bianca, the colorful extrovert. I often identify the most with my characters who make terrible choices, to be honest. But I also have a lot in common with Sophie, because I’m an introvert who needs to hide out and avoid people for long periods of time. I feel like Sophie and Bianca together are a good representation of the two sides of my personality.

The relationships between all the characters were so complex and heartfelt and real. Did any of their decisions surprise you?

A lot of stuff in this book kind of surprised me as I was writing it. I feel like I can’t really enjoy writing unless I get surprised sometimes—and if I don’t get surprised, then the readers won’t be surprised, either. In particular, a lot of the choices that Bianca makes in the book felt kind of surprising, but then they made perfect sense with her character and the naive, idealistic, over-privileged way she starts out and then everything she goes through. The thing halfway through where Alyssa tracks down Professor Martindale was a huge curveball that I hadn’t expected, but it opened up a whole different second half of the book than what I’d been expecting.

Humans don’t come off very well in The City in the Middle of the Night: civilization has fallen far from its starfaring days, and even small groups find it hard to work together toward any common goal. Is this pessimism reflective of our current moment or is it predictive?

A little of both. Humans are clearly not the best at thinking about the long-term consequences of our actions, as you can see from the way we’ve treated our own habitat. And as I just said earlier, we’re also good at pretending things are “normal” when they’re actually quite arbitrary and random. But in this book, there’s a whole other piece of it: people have colonized this other planet where we’re an invasive species, and the lack of a day/night cycle is just emblematic of all the other ways that this planet isn’t the place we evolved to live in. A lot of what goes on in this book is just a reflection of the fact that humans maybe aren’t capable of finding a stable political, economic and social system to allow us to live in such a different place for the long term.

I didn’t see much space for art in the human or Gelet worlds. Was this intentional? Do you see a place for a writer like yourself anywhere on January?

Oh wow… that’s a really interesting question. I definitely mention that Xiosphant has movies and stories and cheaply printed stuff. I think that given their rigid economic system, you’d either have to write fiction in your “spare” time, or somehow get apprenticed someplace where that was part of your work. But also, it’s a society with rigid class stratifications, so there are definitely people who have time and ability to create art among Bianca’s social class. I suspect that it’s like a lot of times and places on Earth: there’s “high” art created by people with expensive educations, but the most compelling stuff is created by people who haven’t been taught the “right” way to do things quite as much. And Argelo seems to be chock full of artists and creators and weirdos who go without sleep for long periods and create their own masterpieces. Among the Gelet, I think art would be a very different thing—we do see a puppet show, and we see a lot of shared dreams. The Gelet have fables and stories that have been passed down, but they don’t seem to tell lies in the same way that humans do—so their art might consist of possible futures and ideas for what might happen, rather than stories about the past or present.

What other works inspired you as you wrote The City in the Middle of the Night?

I’m always incredibly beholden to Doris Lessing, and I feel like her Martha Quest novels as well as The Good Terrorist are all over this book. Nobody is better at writing idealistic young characters who make awful, destructive choices for noble reasons. She’s a huge part of why I write, and the way I write. Also, I shamelessly borrowed from Ursula K. Le Guin for this book, especially The Dispossessed and a bit of The Left Hand of Darkness and The Telling. Octavia Butler’s Xenogenesis series is also a very obvious influence that I was drawing on a lot. And there are many, many others. But when I write characters like Sophie and Bianca, I’m always thinking back to Doris Lessing.

If you were offered the chance to undergo “Gelet-ification” would you take it?

Of course! In a heartbeat. Wouldn’t you?