I live in the heart of a major city, and I almost never think about the fact that nature wants to kill me. Everything I fear on a daily basis is to do with my own species, and not the plants and animals that I mostly observe for their adorability, not edibility. But in the history and geography of the human race, this is a luxury. And for the characters of The Queen of Sorrow, the last book of the Queens of Renthia series by Sarah 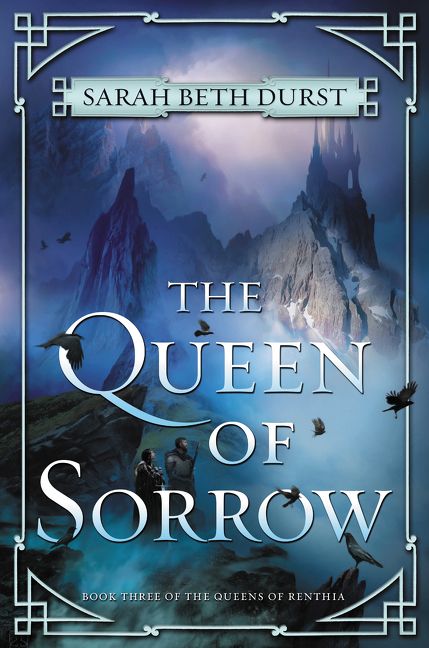 Renthia is populated by spirits, and not the mystical sorts that subtly infuse nature and respond only when called upon. These are creatures of flesh that inhabit the land alongside humans, making it fertile and dynamic, but also highly dangerous. Given the opportunity, spirits will attack and kill humans. But humans cannot respond in kind: to do so would be to kill the elements the spirits embody. Thus, killing a tree spirit would kill a tree—and all the trees have spirits. Humans have to find an uneasy peace with spirits, one enforced by the magical queens and their heirs. Daleina and Naelin are two such queens, ruling in tandem and trying to find a way forward after the devastation of war in the previous book (The Reluctant Queen).

As ever, Durst’s characters are her greatest strength. I was blown away by Daleina in The Queen of Blood, a character who was measurably weaker than her peers and who had to find ways to outsmart or collaborate with the spirits that others could just command. It turned the Chosen One trope on its head, not because Daleina was the smartest, but because she was the most determined. Hard work, effort, and commitment are often glossed over or ignored entirely in favor of natural and supernatural gifts, but Durst’s books are a compelling argument against the trope.

Daleina remains one of the strongest characters. Naelin though, star of The Reluctant Queen, is less compelling this time around. Though I was extremely happy to see a divorced mother of two get to kick some ass, most of her motivation depends on reacting to immanent threats to her children. It’s a too-obvious way to motivate a mother character, and it makes Naelin’s attachment to her children as frustrating at it is admirable. There are justifications for her fierce devotion even beyond that of being a good mother, and I can appreciate her singlemindedness. Yet her unwillingness to see herself as queen is irresponsible to the point of cruelty, forcing thousands of her subjects to bear what she won’t. This is a point of great character growth for her over the book, yet it was hard for me to overlook her early missteps. There is no catharsis for them—her people and her loved ones forgive her without punishment or accountability. She also does not learn from Daelina’s example and consistently fails to make contingency plans, which again puts her entire country at risk.

Quite a few people make a number of head-scratching decisions that make reading The Queen of Sorrow a bit like driving along a bumpy road. You’re getting somewhere, but you occasionally have to wince. Sure, people can make less-than-optimal decisions, but these are anime levels of skipping the conversation in favor of the fight. And of course, my personal least favorite: someone “disposing of” characters by exiling them to supposedly inescapable circumstances instead of just killing them outright. When plot hinges on contrivance, things don’t just get less believable. They also get less resonant. It’s hard to feel joy in a character’s triumph when their success is inevitable, and the only mystery is in how it happens.

This may seem like a highly political book, but Durst’s characters are mostly straightforward, even the more devious Queen Mericot. This results in negotiation sequences that seem more like standoffs—or infodumps. Everyone asks for exactly what they want, and guile is the tool only of the wicked. It made all of the characters seem rather naive, but the politics are swiftly resolved, which leaves more time for things to happen. This is the kind of book that would take G. R. R. Martin three books to resolve, and though I found the politics jarring, I wasn’t sorry to see everything move along.

However, this meant that many of the emotional moments missed a beat for me. It wasn’t that certain events weren’t sad—the trilogy is surprisingly heavy on the massacres—but that the plot upstaged the emotional resonance. Everyone and everything kept moving, and it seemed very much like Durst wanted to focus on action rather than inhabit the sadness she was invoking. For a book called The Queen of Sorrow, it’s remarkably full of hope and love. There are two weddings, in fact. Happy ones.

This trilogy reminds me most strongly of 90’s fantasy, those chunky paperbacks with glossaries at the back and guaranteed optimism. There’s no glossary–thank heavens those have fallen away and only the actual linguists bother creating their own languages anymore–but there is the overwhelming sense that everything will work out and that everyone is Pretty Decent Actually. I think people tend to take optimism less seriously, but I don’t have any inherent problems with it. It’s more that I become skeptical when it’s blithe optimism, skipping over consequences that the world itself dictates just to make things neater.

Not all of the happy endings are blithe, though. There is still a great deal of hard work, both magical and emotional, that goes on to bring the characters to their various conclusions. Durst has a great grasp of the nuances of relationships at a personal level, which makes up for the less-than-robust politics. Mothers and sons, ex-husbands and lovers, friends and allies are all given some real consideration. There’s significant thought and maturity in these relationships, and a real unity of philosophy besides. Each character has to grapple with aspects of their own weaknesses and overcome them, but none of it is too obvious or forced.

Durst’s overarching argument is that weakness is opportunity rather than flaw. An overwhelming number of fantasy books are about people who strive to rule or strive to keep ruling, not about reluctance and limitation, and the change is refreshing. Abdication, usually not even a consideration in most books about embattled royals, is a genuine option here, considered by several queens as they try to find the best possible option for their people. Naelin’s missteps are perhaps so glaring because everyone is genuinely trying to find a way for humans to even survive in their harsh world, let alone thrive.

Despite its missteps, I have no qualms about recommending either this final book or the trilogy, since its redeeming characteristics outweigh its flaws. A flawed series with an interesting world and unique characters is still infinitely more readable than a cookie-cutter fantasy, and I am glad to see that this will not be the last installment set in such a challenging world.

Queen of Sorrow will be published May 1.