So the world ended. As apocalypses go, it wasn’t the worst: there were no zombie pandemics or nuclear holocausts. Most people even survived it. Unfortunately, a decade later, they’re still surviving, not really thriving. It’s not the standard dystopian dictatorship that’s really keeping them down, and it’s not the weird new stars in the sky that keeps them inside at night. It’s the Epics.

Epics are ordinary people endowed with superpowers straight out of the golden age: they have dramatic, sometimes strange, and always thematic powers like manipulation of fire, or water, or darkness. They are also all selfish, emotionless, and evil. So much for waiting for Superman–this is pure Earth Three. The only good thing about these Epics is that they invariably have a single weakness that robs them of their powers, kryptonite-style. In Chicago, dubbed “Newcago,” the ruling Epic is Steelheart, a man who can turn inanimate objects to steel and who is impervious to harm. Except that he must have a weakness like all the others–right? 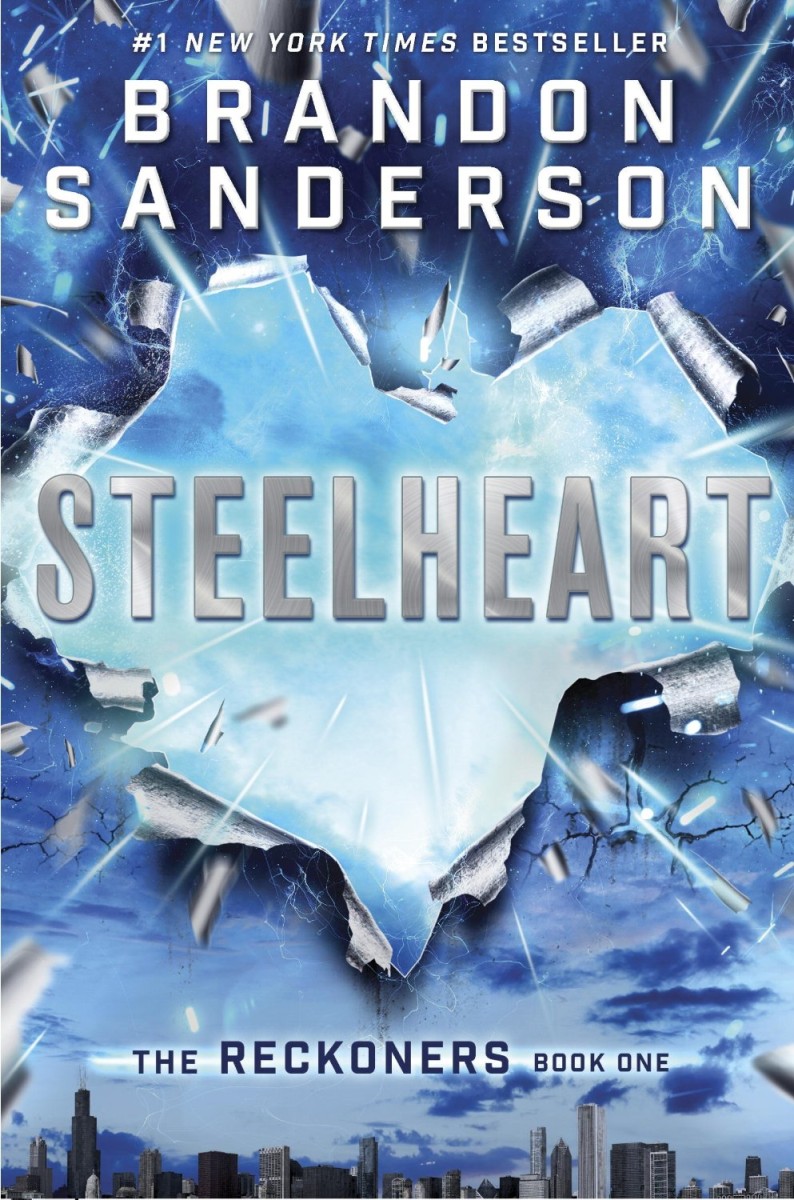 Enter David, a teenager with a couple of secrets. One, he might know Steelheart’s weakness. Two, he’s been training and researching to join up with the Reckoners, the ultra-secret group bent on taking Epics down. Obviously he finds them, but they aren’t quite as he expected. They’re a colorful cast of characters, and collectively, they play Batman to the Epics’ Supermen with their gadgets, skulduggery, and, in the case of their leader, extreme brooding.

If you’re familiar with Sanderson, you’ll know that he has some of the most (if not the most) innovative magic systems around. As always, the system(s) are on the technical side rather than the ethereal side, kind of like a more different version of science (testable, repeatable phenomena with explanations grounded in natural causes and effects)–but that’s another conversation.* There’s nothing dry or technical about the writing though, just clear explanations of the basics before he launches into fight scenes that push his self-imposed rules to their limits. His rules are to action sequences what sonnets are to poetry: they create just enough structure to elevate all the content, making us really appreciate how deft he can be.

You may also know that Sanderson began his career with protagonists of high-powered backgrounds (typical of a lot of fantasy): they were generally either exceptionally magically gifted, in the highest political echelons, or both. But with his YA novels–Steelheart, Firefight, and the unrelated The Rithmatist–he’s chosen characters who are relatively powerless. I think this has been an excellent departure for him, really letting him get away from those last clinging fantasy tropes and bring out his impressive creativity.

There’s a lot more thought that needs to go into plans when non-powered characters go up against world-endingly powerful ones, and Sanderson has clearly thought everything through. Perhaps most impressively in this department, his characters have also thought everything through, but that doesn’t mean their plans go off without a hitch. Mistakes–whether character- or plot-driven–are a hallmark of great plotting, because they make things real. And mistakes that don’t make anyone, villains or heroes, seem like idiots? I swoon. 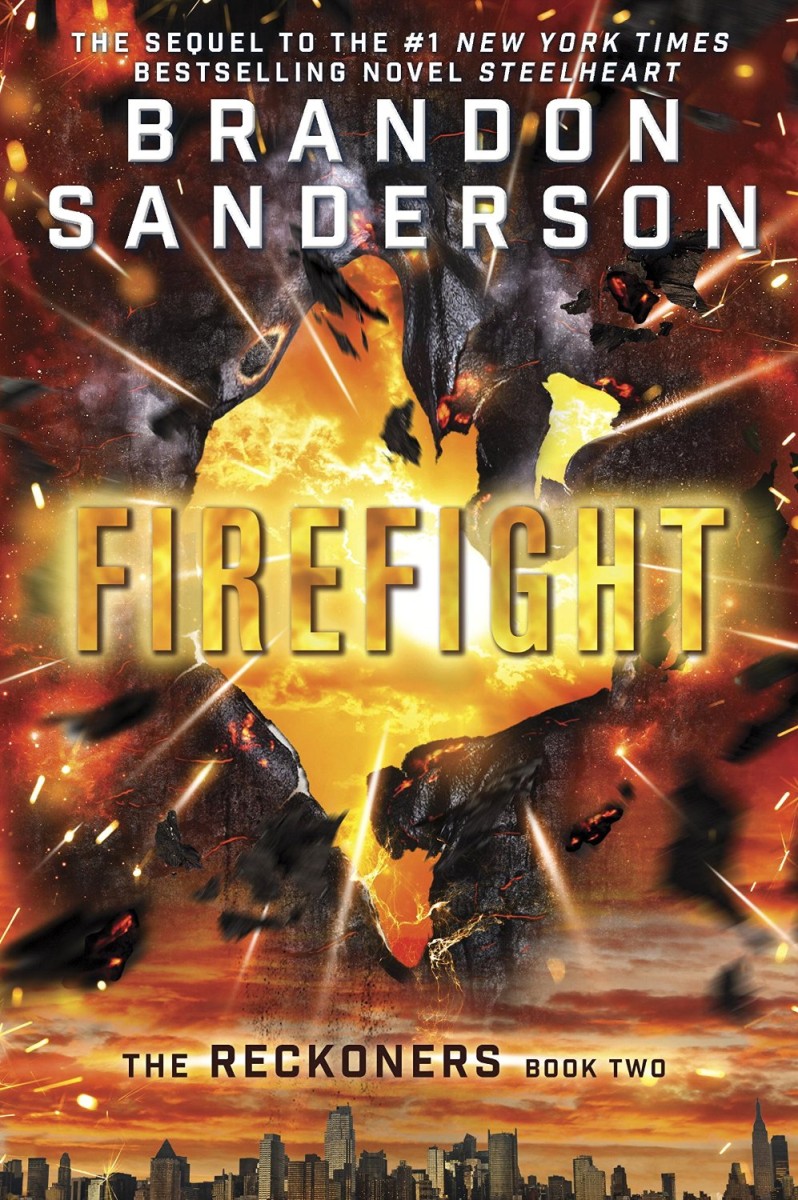 Nobody has plot armor–there are significant character deaths throughout (though the body count isn’t anywhere near GRRM levels)–but there are some slightly convenient circumstances. Steelheart suffers this more so than Firefight. Steelheart also suffers from some slightly awkward dialogue and forced slang, especially one character, whom I suppose some people will find endearing, but whom I found extremely grating.

He’s also hit his stride as far as pacing goes. The action is consistent but well-spaced, allowing time for character development in quieter moments. The twists are a specialty of his, and he executes them with his standard panache. Every revelation is sufficiently hinted beforehand, but few were too obvious, most of those in Firefight, though nothing major.

Firefight really brings things to another level with the humor. While never absent from his other books, Firefight kicks it up a notch by unleashing David’s epically terrible/awesome metaphors. They made me nervous at first–there’s something obnoxiously writerly about drawing attention to your metaphors and showing off how you can do them not only well, but badly (doing things badly is just as hard). But they’re just so exuberantly stupid and so funny and so much a part of David that I think it’s safe to say that it’s not Sanderson’s ego at work here. My favorite was David comparing his love interest to a potato in a minefield, which is just delightfully, head-shakingly weird, and is actually really sweet once he explains it. I laughed aloud at certain points, which is a feat, since I do most of my reading on public transit.

I’m tempted to rate Steelheart lower than Firefight, just because I loved the way that everything gelled in Firefight, but you can’t really have the one without the other. You need the setup and world building of Steelheart to really appreciate how fully Sanderson inhabits it in Firefight. 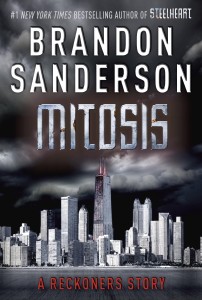 I am positively in agonies over the wait for Calamity, the third and final installment of the Reckoners. Wikipedia suggests that we’re a year away from receiving it, so here’s hoping that we at least get another short story like “Mitosis” to tide us over. (A brief note on that brief story: it’s a bit overpriced for 30 pages, but it’s good, has a rather inspiring ending, and I’m not sorry I spent the $2. Better than a coffee.)