Let’s just get this out of the way first: in Red Queen, a young woman is dragged from obscurity, thrust into a deadly competition, and then embroiled in a revolution. Comparisons to The Hunger Games are inevitable and warranted. Fortunately, Red Queen riffs but doesn’t replicate. It has its own world and its own rules, which in this dystopia include magic.

The Silvers, so named because of the color of their blood, have powers of the usual types: elemental manipulation, telepathy, invisibility, and so on. There’s nothing too weird or spectacular in the abilities themselves; what’s more interesting is that, rather than being outcasts or heroes (or both), the Silvers are oppressors. They keep Reds like Mare Barrow and her family down, using them as laborers, servants, or conscripts in an unending war. More than social, economic and racial power, the Silvers have literal magic power, and Mare doesn’t have the first clue how to overcome all that, much as she would like to. 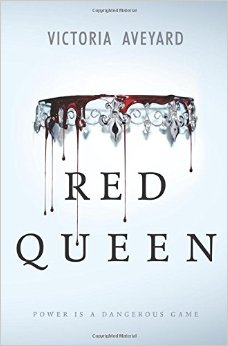 All that changes when Mare accidentally discovers powers of her own. She enters the realm of the Silvers, which is about as decadent and awful as she imagined, and tried, with varying degrees of success, to instigate change.

Frustratingly, while Mare has some barbed quips up her sleeve and argues very well–I was impressed by her defiance in certain situations–her internal monologue is not so passionate. Descriptions of both opulence and degradation are somewhat perfunctory, and it’s often difficult to feel the extremities to which Mare is pushed.

Mare begins her brand of revolution as a double agent, feigning loyalty (under duress, to be fair) to the Silver monarchs while working for the Red rebels. She’s especially worried about collateral damage, but her anxiety never quite translates into heroics. This is an unfortunate double-bind that the author wrote herself into. On the one hand, it would be very difficult to sympathize with a character who condones assassination. On the other, moral hand-wringing makes it seem like Mare lacks essential agency. It doesn’t help that the rebels don’t want her to do all that much more than the royals: play along. I hope that future volumes will include her using her powers to engage in more dramatic feats of espionage. The fight scenes were cool, but I was often left wondering why she never turned her gifts toward subtler targets, using them to obtain information or mislead others.

These frustrations with a sense of inaction, however, have a spectacularly satisfying payoff in the conclusion. It will seem an odd statement to praise such a conclusion once you’ve read it, but all I can say for now is that having characters face real and dramatic consequences for their failings is a nice change of pace, especially in the romance department. In a way, it rewards the reader for noticing the ways in which Mare and others are inactive or inattentive–those aspects are not hand-waved away. Maybe it’s a tad sadistic to feel this way, but I am rather sick of lesser YA forcing happy endings on characters who don’t entirely deserve it.

It wasn’t until I read Red Queen that I realized how the whole narrative in YA has shifted. I remember growing up, stories of women having to fight and earn their way into royal society. Now young women are forced into it under pain of death, and they see it as irredeemably hollow and cruel. These are stories about regimes, yes, but there’s something else at work here. Entering the “grown up” world used to be fraught, but now it’s out-and-out war.

Not that childhood is much better. This new crop of heroines spring from poor, deprived backgrounds, where they bear witness to inequality but are too busy trying to survive to do anything about it (does this remind anyone else of middle school?). When circumstances thrust them into power, they don’t want to belong. They want to rebel. They want to break the world.

Which isn’t to say I dislike what came before. The Song of the Lioness quartet is about as perfect a YA series as exists, and Alanna doesn’t leave her country a smoldering ruin on her quest to become the first female knight in centuries. However, I do find all this patriarchy-smashing indicative of some larger issues at play. The internet has made current events, education, and sophisticated opinion much more readily accessible for teen girls (and everyone else). As such, you only need to take a small sample of tumblr to understand how much more socially aware readership has become. And with a clearer picture than ever before, who can blame young women for being furious? But the internet has also enabled widespread polarization, such that compromise is often treated as betrayal. Characters in the books are able to see the good in certain members of the elite (Mare finds good in the princes), but there can be no sympathy for the system.

This isn’t an indictment of Red Queen or any other dystopian YA. In fact, I find it very refreshing to see how we’ve gone from fighting evil kings and sorcerers (themselves symbols of systems) to fighting systems themselves (still symbolic, but less so).  It’s more of an observation. There’s room for Alanna and Mare and Katniss and yes, even Bella, on the world stage.