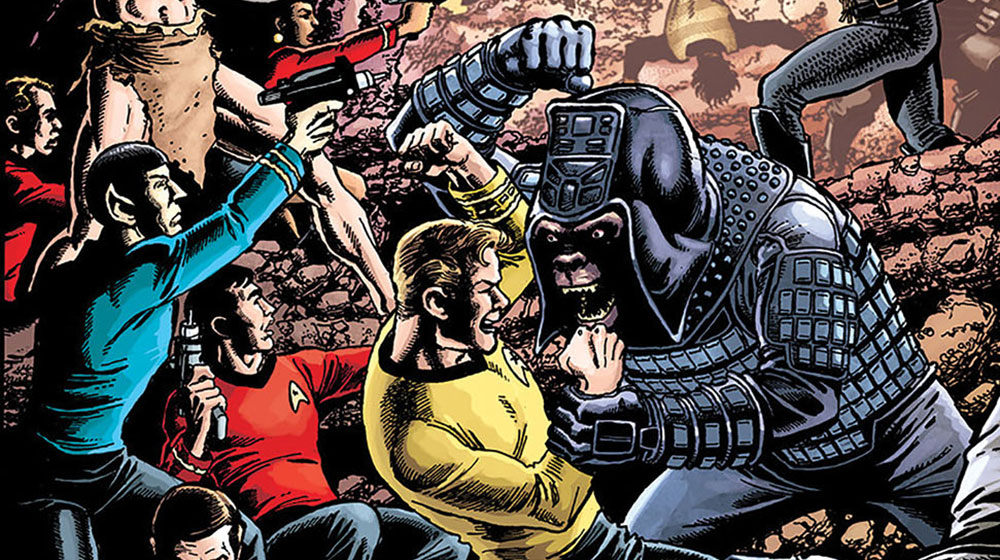 Yes folks, I’m talking about crossovers. They are a part of pop culture that is used to increase sales and hopefully to cross-pollinate brands. It’s hard not to go into them with a cynical eye, but they can be a lot of fun when done right.

This brings us to IDW and BOOM! Studios premier issue of Star Trek / Planet of the Apes: The Primate Directive #1. We’re on the cover and already three fonts in. I am immediately skeptical.

The book opens with a mysterious figure making a deal with an ape general for some modern, at least by ape standards, guns. We see the cruddy wooden guns from the original Apes movie, and the mysterious figure totally slams how lame those are. What does he want out of this “guns for apes” deal? He’s not saying just yet, or in this issue at all.

Back on the Star Trek side, which makes up roughly 90% of the issue, we catch up with Uhura and Sulu, who are in the process of infiltrating a Klingon base. They recover some data which the Enterprise crew uses to figure out the Klingons have started a new campaign of conquest in the galaxy. No one has noticed or reported any Klingon attacks, but Spock quickly discovers that they are using a new technology to expand the Klingon empire into “otherdimensional space”.

After a brief battle with some Klingon warbirds, the Enterprise follows a fleeing ship through the dimensional portal, and the crossover proper can finally get started. Now normally this might be a spoiler, but since Planet of the Apes is on the cover, and we’ve already been introduced to it in the intro to this very comic, I’m going to spoil this for you: Statue of Liberty? That was our planet. Those maniacs blew it up. Damn them all to hell, etc.
The artwork by Rachael Stott is great. The Original Series Star Trek cast especially look faithful to the actors in their primes. The book is incredibly talkie throughout, which I think is an intentional throwback to original Trek. Writers Scott and David Tipton did a good job of capturing the character banter without it coming off as super cheesy.

Real talk: I want this series to be good. It’s the kind of crossover I absolutely could not resist reading because the premise was just too ridiculous to not investigate further. I mean, The Primate Directive? Are you kidding me? Hell yes I’m going to buy that book!

It’s a slow start to the series. As mentioned above, most of it is the Enterprise crew standing around talking. There are a lot of intentionally hidden plot points executed in the most unsubtle of ways. It didn’t knock my socks off or anything, but it did make me want to see what craziness happens now that the crew is on “otherdimensional” Earth. It isn’t the kind of book I would tell people they have to run out and grab, unless you are like me and have to see what all the fuss is about. My hope for the book moving forward is that they don’t hold back. The biggest problem with most crossovers is neither side can win, so they have to come to some milktoast middleground that is unsatisfying for the fans of either property. To make this a good ride, they need to go… ape?

I’ll show myself out.