This was my opening line when it was game-time last weekend with a group of college buddies.  Don’t worry, I was met with blank stares then too.  But if Camel Up can turn their doubtful looks into laughs, I’m confident it will win a place in your heart as well.

Camel Up won the 2014 Spiel des Jahres award for Game of the Year. This award was won in the past by juggernaut games like Settlers of Catan and Ticket to Ride.  It is a family game, featuring an easy to understand yet unpredictable movement mechanic that keeps the outcome of the game in doubt until the very last turn. 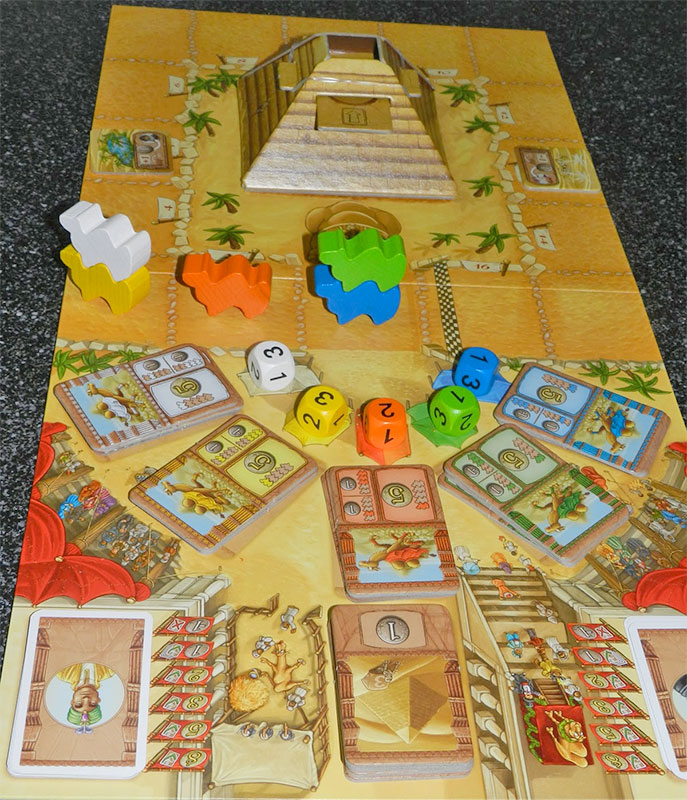 The object of the game is straightforward –  you are an accomplished camel racing expert, who will gamble on a race around the pyramid and attempt to win more money than your clearly inferior competitors.  Wager on which of the five finely bred racing dromedaries will win or lose the race, or place shorter term bets on which camel will be ahead after each round of dice rolling.  The earlier you place your bets, the more money you can win.  Clearly with your camel acumen, your riches will grow to previously unimagined amounts!

On your turn you choose one of the following four options: place a bet on the winner or loser of the race, place a bet on the current round of dice rolling, put an oasis tile on the board to speed or slow camel movement, or roll a die from the pyramid.

Five colored dice (one for each camel) will determine how the racers move.  Dice are rolled from the pyramid one at a time, so the camel corresponding to that die will move around the board.  The fun starts when two pieces occupy the same space – instead of snuggling up side by side, camels will hop on the back of anyone who stands in their way!  There are no straws in sight, so any camel can hold all of the others – it isn’t uncommon to see a stack of five pushing towards the finish line.  When a camel moves, it takes everyone above it as well, so a well timed camel-back ride can put your racer ahead of the pack for good. 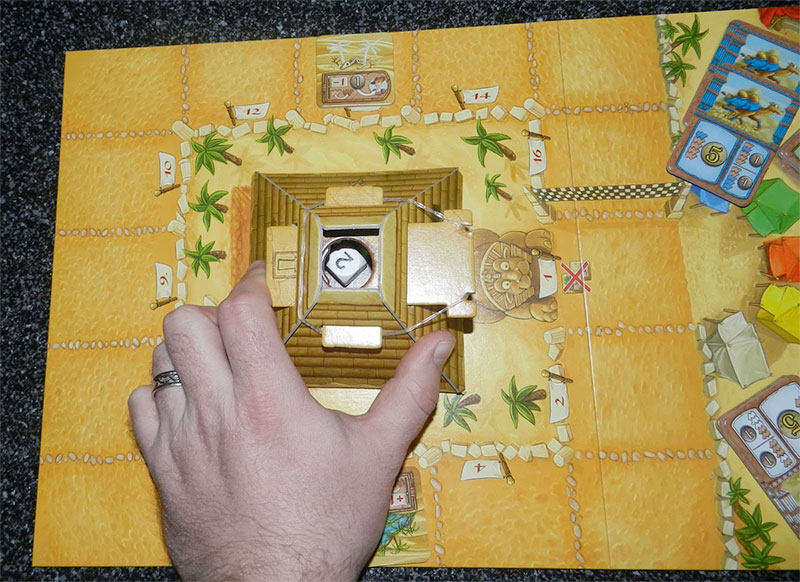 The movement mechanics make Camel Up tilt more towards ‘Luck’ than ‘Skill’, and the fact that you’re encouraged to secretly back camels early in the game means the winner won’t be known before the final tally.  While movement is simple, results are very unpredictable, because they depend on which colored die is rolled as well as the number  shown.  Working out how the camels will move depending on the dice order is the deepest you’ll need to think – you can play the odds to a point, but there can be huge swings in a turn.  The earlier you bet on a specific camel the less information you’ll have, but the more money you can win.  Go all out and hope for the best, or wait until the odds are in your favor – either is a valid path to victory. 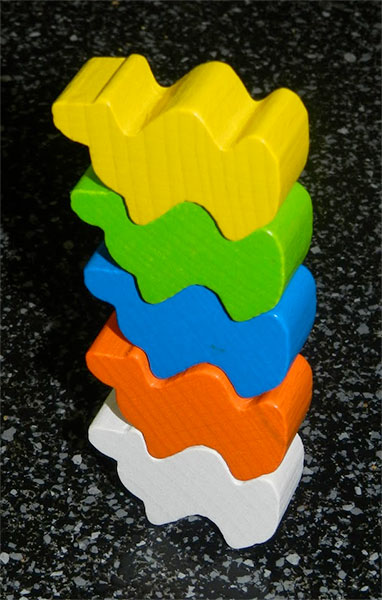 The instructions recommend play for ages 8 and above, and I think that is conservative.  The decision tree is small and the math is simple, so a bright 6 or 7 year old will likely pick up the rules after a few play throughs.  While the theme of the game is ostensibly gambling, you can never owe money and you’re not directly betting against other players.  Though 2 to 8 people can play the game, I think it is best played with 3 to 5  for the best balance of skill and luck.  Playing with 6 or more is still tons of fun as long as you’re more invested in having a good time than optimizing your chances to win.  The game is very quick – the box estimates half an hour and my experience confirms, even with 7 players.

The camel meeples are the best component of the game.  Easily identifiable as camels, they stack nicely and use bright colors.  The dice temple is a cute idea – a punch out board folds up into a pyramid while a secondary piece is inserted into a slot in the pyramid and is used to restrict the opening so only one dice is rolled at a time.  A small elastic holds the structure together, but is a touch fragile for my liking.  The game comes with three elastics, but I broke two setting up the pyramid the first time.  There are eight sets of character cards used to wager on the camels, as well as one ‘oasis’ tile for each (used to speed or slow the camels movement).  We found it difficult to differentiate between the eight different characters – the pictures are small, and in our first game two players ended up with mismatched oasis tiles.  Larger pictures or a distinct identifying symbol would have been easier for setup.  The board is well laid out and not too cluttered – the racing track circles the dice pyramid,  there are well marked areas for wager cards and even a spot for the dice already rolled this round. Cardboard punch out pieces are used for oasis tiles, the pyramid, and interim betting tiles, while more traditional cards are used to bet on the outcome of the race.

Overall Camel Up is just plain fun to play.  This would be a great game to break out for a group with varied gaming interests – it’s quick, simple, and anyone can win.  It’s fun for kids, but isn’t boring for adults – a common problem with kids games.  Bring it out with the whole family and get ready for a wild race around the desert.

Buy Camel Up on Amazon.