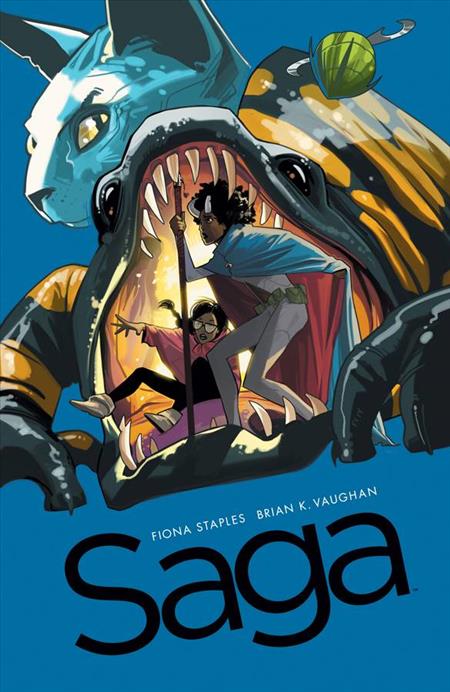 Another home run from the Saga team. Vaughan and Staples seem to be able to do no wrong, and I chalk it up to good pacing. Both in the book and in their schedule to make it. Saga 26 expertly blends bits of actions with great character development with a hint of intrigue to boot. The only bad part about this series is that I feel you really need to start at issue one to understand all the goings-on. Not a terrible mark against it, but for someone wanting to dive in head first, only the first issue or trades would be the logical choice. Luckily, both are in great supply just about everywhere in any form you could want them. Now, on with the gushing!

This issue carousels around our three major groups in the story, and we start exploring rather heavy themes and motifs with a few characters. The group we open on is the unsteady alliance of best and worst dad’s of galaxy, Marko and Prince Robot IV. With them are their sidekicks little mole man (I’m sure he has a real name, but it escapes me at the moment) and Yuma, Marko’s wife Alana former manager and drug dealer. I know, what a wacky bunch they must be! This group is on a mission to get Marko’s and IV’s families back, as they were kidnapped by a psychopath named Dengo. We’ll get to them in a minute, but what I first want to talk about is what team dad is dealing with, that being addiction to our primal instincts. Marko’s addiction is the most prevalent as he specifically brings it up later in the issue. He has an addiction to violence and rage. During the opening scene of the issue he nearly beats a man’s head in with his bare hands. Luckily, little mole buddy was there to snap him out of it. Marko recognizes his addiction and grapples with it through the rest of the book until the shocking ending. Vaughan is a heartbreaking genius.

Prince Robot on the other hand has internalized his addiction, which is to sex. Every time we peek inside his mind, it is always some lurid sexual fantasy that ends in some twisted death. IV might be the most together of this group on the outside, but he has shown that he can snap. And when he does, sex is the furthest thing from his mind.

With this group dealing with various forms of addiction, it’s an exciting choice to see them paired up with a drug dealer and user. It’s also interesting how Yuma plays the mediator between the butting heads of Marko and IV. I feel like this might end up being the most tragic of the three tales Vaughan is spinning.

The second major group in this issue is what I refer to as “Space Girl Squad!” They are comprised of Gwendolyn (the ex-fiance of Marko), Sophie (the young sex slave The Will freed in an earlier issue), The Brand (The Will’s sister), and Lying Cat (The Will’s cat and personal lie detector). This team is the heart of the book. They are the one’s who are on a rather pure quest, which is to help save The Will’s life. They start this issue in a bit of a jam when Sophie has an idea that at first is shot down by Gwendolyn, but later is the best course of action that not only saves their lives but helps them gain new info on their quest for a cure for The Will.

The last group is team kidnapped. Dengo has taken the tree ship with Prince Robot IV’s son, Alana, Hazel, and Klara. They have landed on a far off planet so that Dengo can meet with some rebel group and coordinate efforts with them. Alana and Klara are appalled that even a psycho like Dengo would team up with this group of rebels as they are known to kill innocent civilians just to gain attention from the powers that be. The scene is very tense as Alana is seconds away from backstabbing Dengo when the rebels show up and cast crazy space magic to knock everyone but Dengo out. As the scene plays out, we learn from our narrator that Dengo is starting to realize the mistake he’s made letting these rebels into his plan.

Once again, the phrase rings true ‘You can’t make a comic without Staples.’ Staples’ art is on point on every page and in every panel. The action is easy to follow, clear to understand, and fun to watch play out frame by frame. The faces are brimming with emotion and the body language displayed in the character portraits is superb. Prince Robot IV doesn’t have a face but I know exactly what he is thinking just from how Staples positions him in every scene. The backgrounds are stunning and thoroughly developed. Vaughan may be able to tell one hell of a story, but it would be nothing without Staples to show it to us.

If you are not following this series, you must go out and pick up the previous trades and single issues so you can catch up and have this issue to issue fun we are all having.

Sage #26  was written by Brian K. Vaughan with art by Fiona Staples