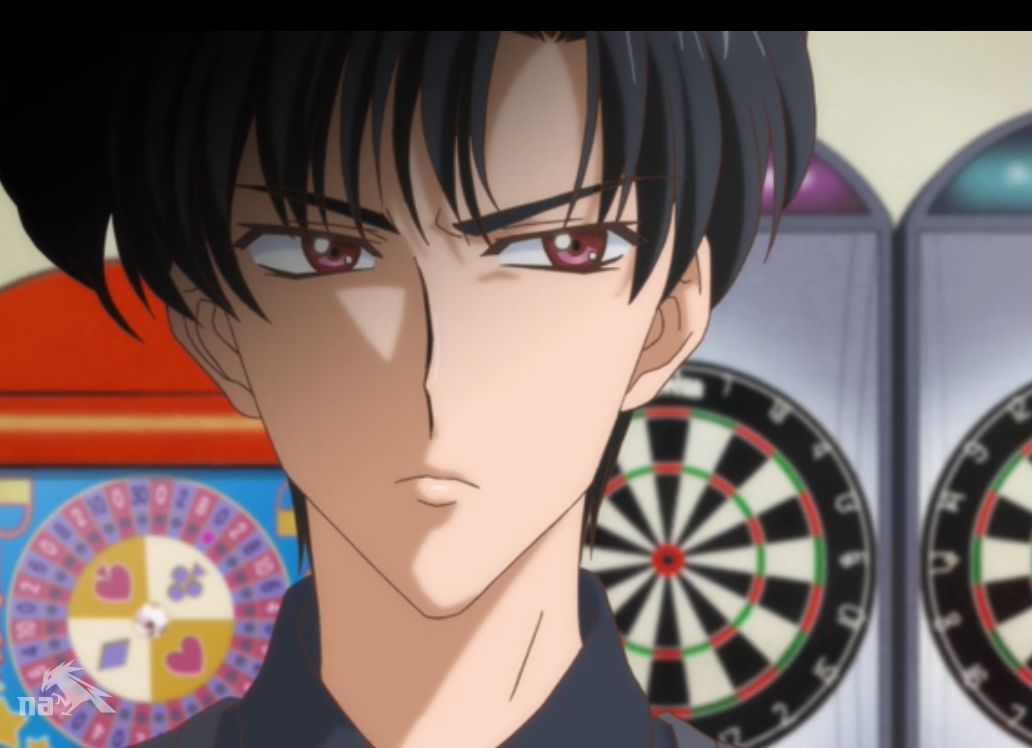 Evil(er) Mamoru makes his appearance in this episode, but first we have a gentle moment with Usagi and Luna. Usagi, clearly still upset but trying to be cheerful, gets ready for school, and Luna reminds her that she can always talk to her. It’s very sweet.

Mamoru enchants Motoki into believing they’re best friends (nice throwback!), and is content to wait. There’s a weird exchange over a book that inexplicably features Jadeite, Nephrite, Zoisite, and Kunzite on its cover, but we’re spared any more of Evil Mamoru making Vague Statements in his Threatening Voice by a girls’ night in with the Senshi.

Ami has them all over to her swank pad to do a few tests with their new sword, which they use to smash a diamond (a diamond ring, in fact. Boy, I hope she is as rich as she seems, or she’s in a lot of trouble). She informs them that the sword is harder than diamond and poisonous to boot. A rock she also took from their trip suggests to her that the entire kingdom, sword included, was turned into “poisonous stone.” Apparently, Queen Metalia did the moon equivalent of sowing the fields with salt; she made the whole planet uninhabitable. Pretty dark indeed. 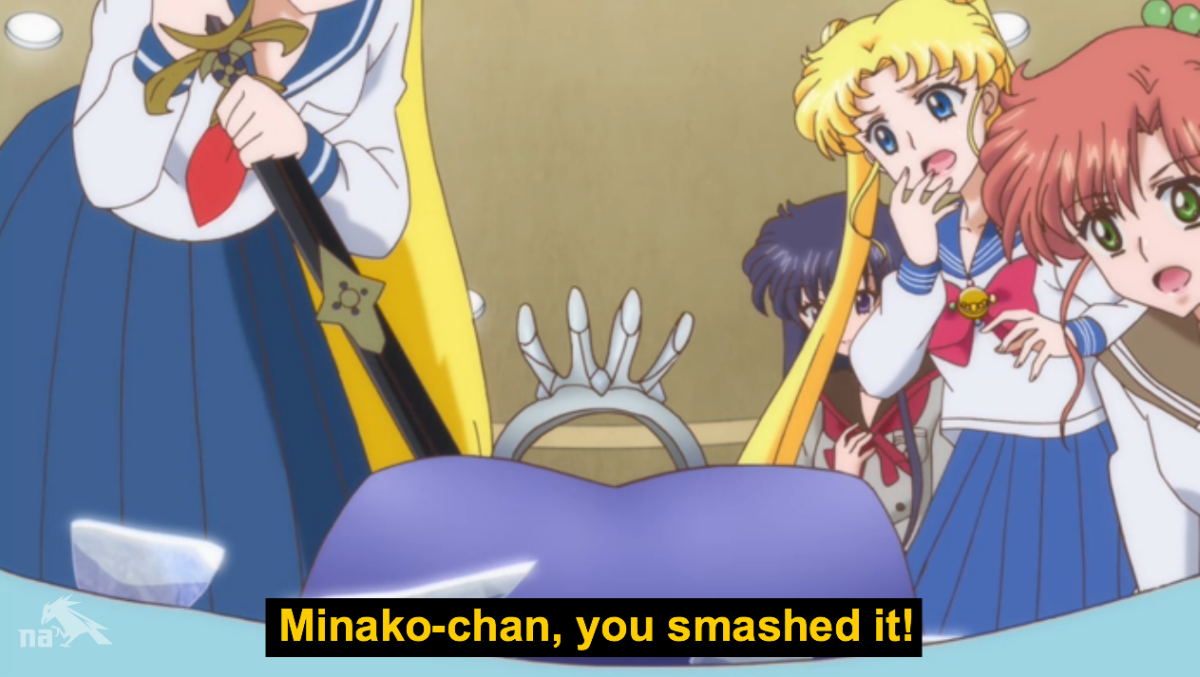 It’s cool, it was only my mom’s engagement ring.

The Senshi continue to work on their many dire problems, but Usagi falls asleep, only to be woken with a strange urge to visit the arcade. She slips out, much as she used to do on the moon, to visit (unknowingly) Endymion. She is astonished to find him there, his eyes turned to a dried-blood red. 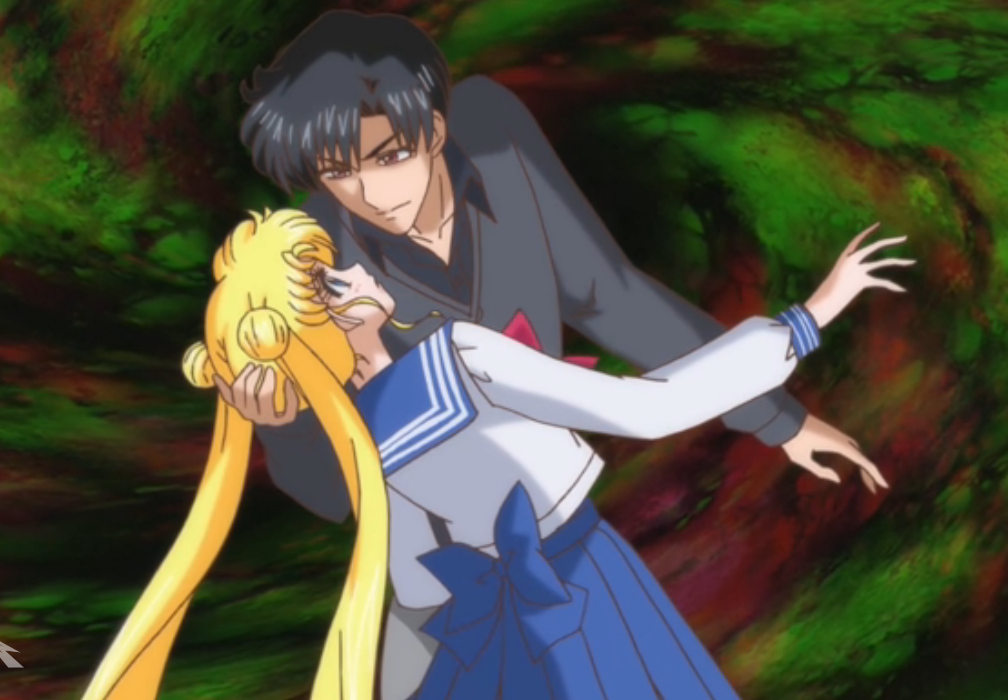 Yes, maybe something is slightly off about him, now that I think of it…

She’s not stupid enough not to know something’s badly wrong, but she allows herself to be drawn in. The rest of the Senshi are also unsettled, but no one is quite sure what to do. Usagi is especially eager to give into the delusion, and begins letting things slip about her allies and herself, though out of longing rather than hypnotism, which doesn’t seem to work on her. There’s a nice moment where they repeat that scene where he gives her her bag, with (more) menace this time. Crystal really shines (lookit, a pun!) consistently in this aspect of psychological depictions and creeping horror.

The girl with the book on gemstones reappears to give the Senshi more information, and Jupiter follows up–only to be hypnotized and used to access their secret command center. She almost succeeds in getting the Silver Crystal, but Rei’s psychic powers warn her just in time. Unfortunately, she’s also allowed Endymion and Motoki to enter their secret base.

They fight over the Silver Crystal, which Motoki actually gets away from Usagi. Fortunately, Venus is really handy with her whip, and uses Love-Me Chain to stop him and get it back (it’s not a joke, by the way. “Love-me chain” is the name of her move from the original). Mercury and Mars also make valiant attacks while Usagi stands motionless. It’s only Luna’s brave sacrifice that snaps her out of it, and also illuminates the Silver Crystal with her furious love. 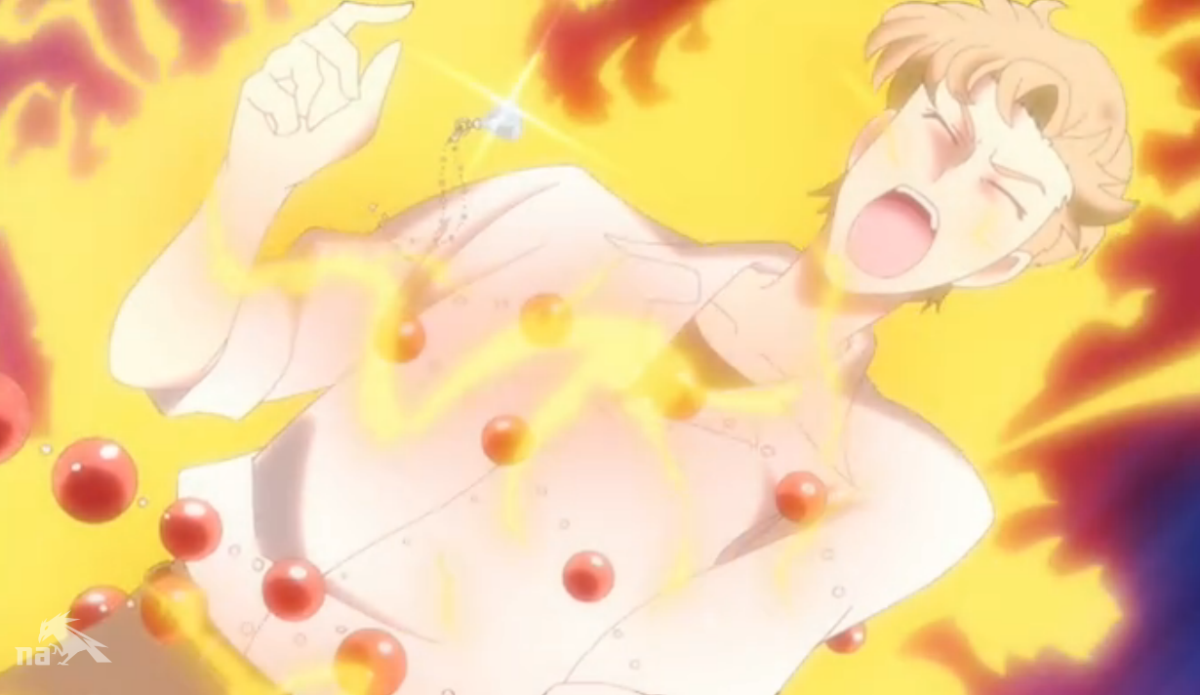 Pictured: definitely not a joke.

The music change during her transformation to a more melancholy tune keeps the emotional resonance of the scene intact. She uses the moon stick to heal Jupiter and Motoki of their enchantment, and hopefully Luna of her injuries. 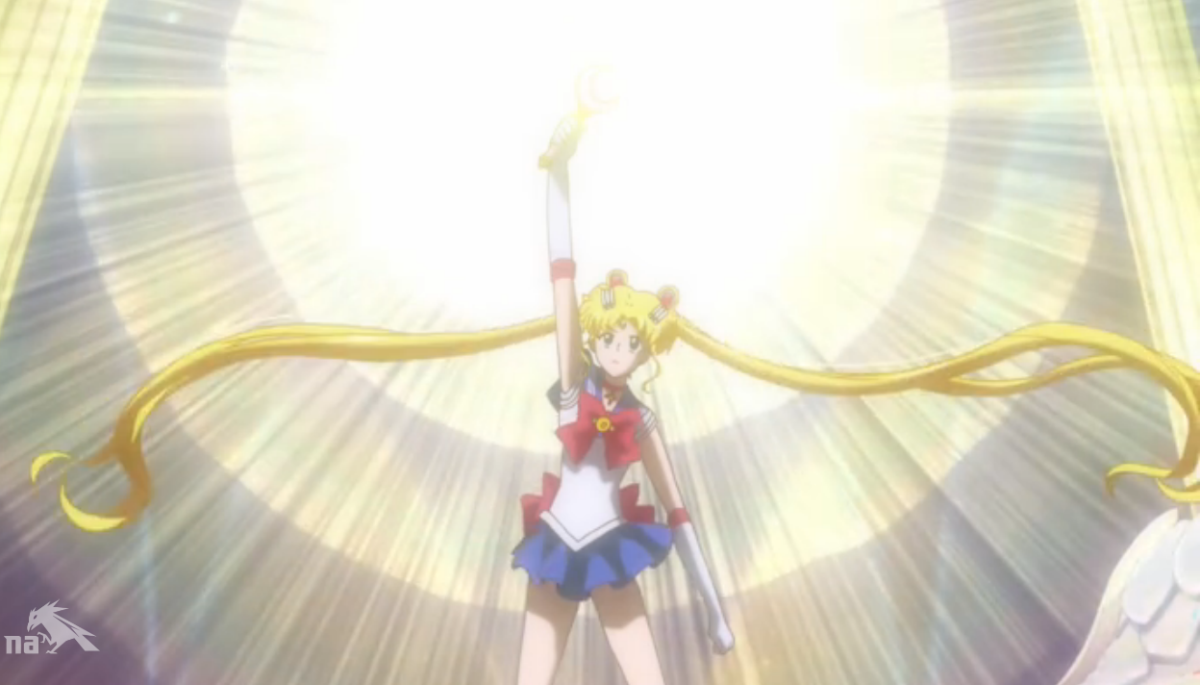 I’d like to take this opportunity to point out that Sailor Moon’s great power isn’t an attack per se; it’s the power of love and healing. She doesn’t want to obliterate those who hurt her, but make them better. Like Doctor Who, whose power is in a screwdriver that fixes rather than destroys things, or Batman*, whose power is determination and optimism more than any of his gadgets or attacks, Salior Moon is a resonant heroine because she stands for more than Punching Bad Guys.

Queen Beryl appears from behind Tuxedo Mask’s cape to threaten them with death at Endymion’s hand. It’s a great moment of illustration and staging, further amplified by what Beryl says rather offhandedly. 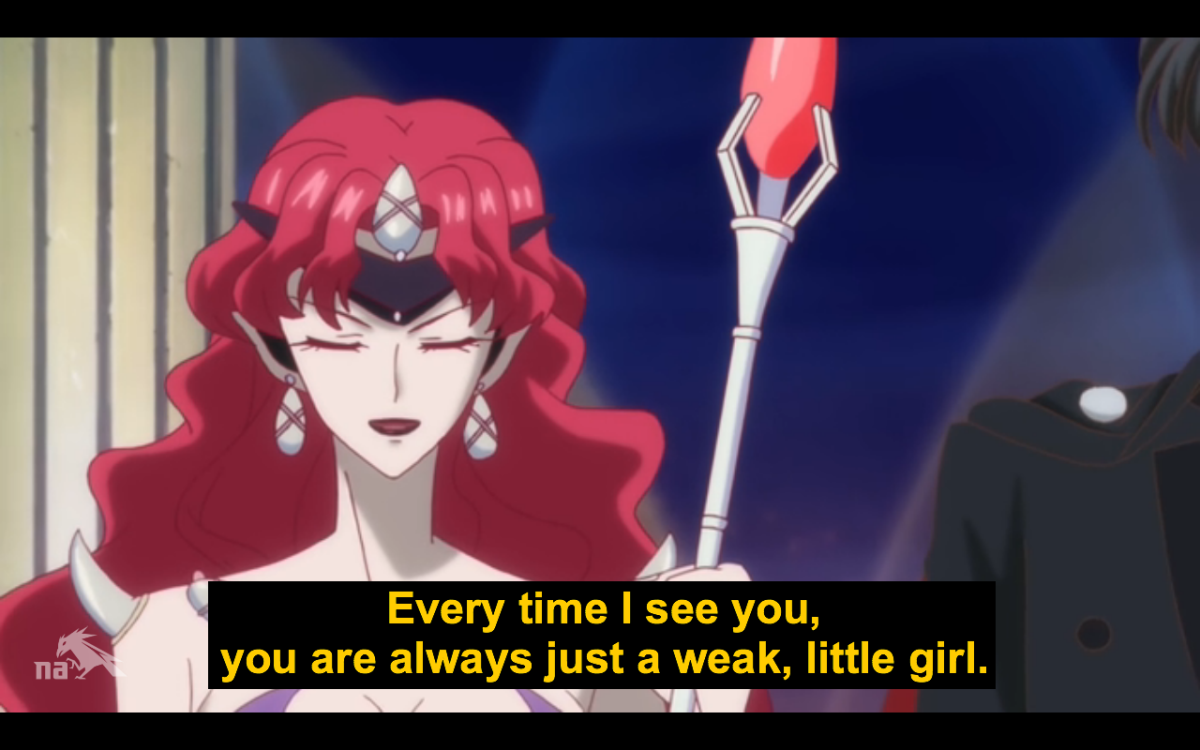 “Every time I see you, you are just a weak, little girl,” is a fairly typical taunt. What strikes me about it, however, is that Sailor Moon doesn’t even bother to shout any denials, like most heroes would. Sailor Moon has flaws, but she is also aware of them, and she doesn’t have the massive ego and foolish pride of so many other heroes. She knows she can be weak, or cowardly, and she knows she makes many mistakes. But that’s okay, because she keeps trying.

*Oh man, could I ever write a dissertation or three on Batman. But let me explain the “optimism” part. Batman doesn’t have the world’s sunniest disposition. It’s probably the opposite, in fact. But he never stops believing that Gotham can become a just and prosperous city, and he never gives up on the criminals he fights. They’re sent to Arkham Asylum, not prison, in the (probably vain) hope that they can one day become productive members of that society Batman is trying so hard to create. For more, see http://comicsalliance.com/ask-chris-163-nobody-gets-better-in-arkham/