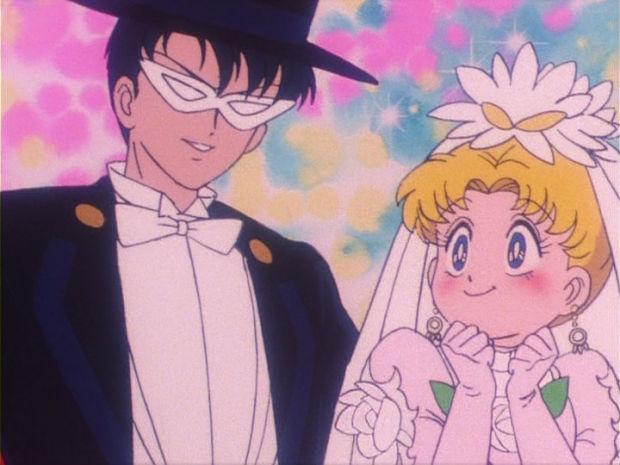 NOTE: Sorry for the delay in posts, folks. I was getting married (to another Geekly)! And then also taking a honeymoon/pilgrimage to Providence, where we saw a bunch of Lovecraft stuff and Caitlin R. Kiernan stuff. (Don’t know who that is? Stay tuned!)

In her umpteenth foolhardy charge into danger, Usagi now has all four of the Inner Senshi to back her up, plus a rather reluctant Pluto, to lead the way. They go charging off into the storm after Chibi-Usa and Mamoru, having taken zero precautions beyond steeling their resolve—I mean, at least in the original they held hands to stay together. 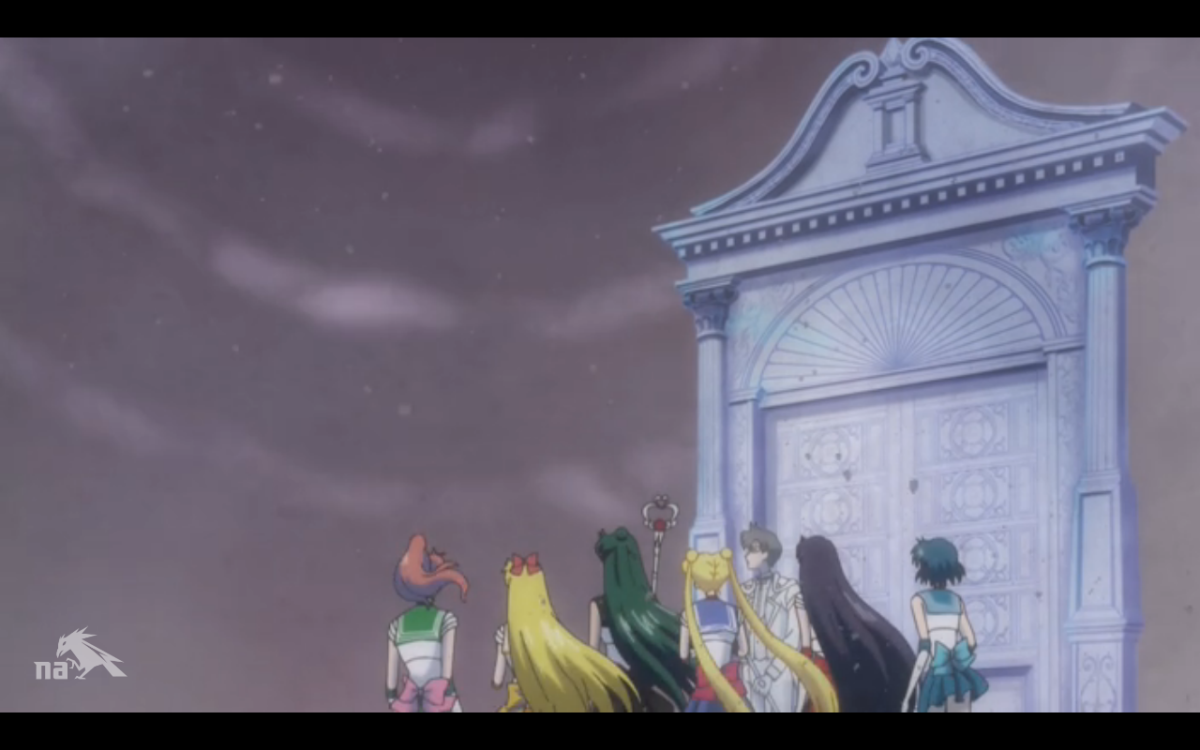 “There’s an eerie atmosphere,” says Mars – I’m hoping that’s just a clunky translation and that Mars is commenting on the spiritual conditions rather than the atmospheric ones. Otherwise, I have to point out that this is another instance of Crystal telling rather than showing, which is pretty pathetic, given that it’s literally a show. The storm isn’t unsettling at all. Mostly it continues to be drab and formless. Yes, a huge storm disrupting all of space and time is a grey blah. Is that meant to be a commentary on modern perceptions of time? Because it feels more like a commentary on the creativity of the animators.

They spend a long time talking and talking about Mamoru’s motivations, which were already obvious. Then, a clue literally falls into Pluto’s arms—Luna P, who’s damaged. Pluto takes this as a sign that they should turn back, and Usagi…faints. Again. Seriously?

This is some of the worst storytelling I’ve seen in years. These characters continue to have long scenes in which they talk about things we already know, establish motivations we already understand, and do not drive either the action or the emotion forward at all. The scene-cuts try to boost the drama, but cutting away just as Usagi faints for the millionth time is a tired gimmick. We know she’ll be fine. All it really accomplishes is to break up the narrative awkwardly, so that we feel that we haven’t really learned anything important.

Also, the cut goes to Saphir and Demande waking up in a grim cavern, which isn’t a bad transition, except that the scenery-change isn’t sufficiently distinct and it’s a little hard to orient ourselves. In this case the exposition of the disembodied explanation is warranted: she tells them that they’re below the Dark Crystal. The woman—Black Lady, obviously—then takes them on a journey into negative space, at the edges of space-time. Though I don’t really care about the fake science of the fusion reactions coming from the Dark Crystal, I do appreciate the dichotomy set up with the views of space-time. Crystal Tokyo is the center of space-time, watched over by Pluto; Wiseman rules the far edges and non-spaces. 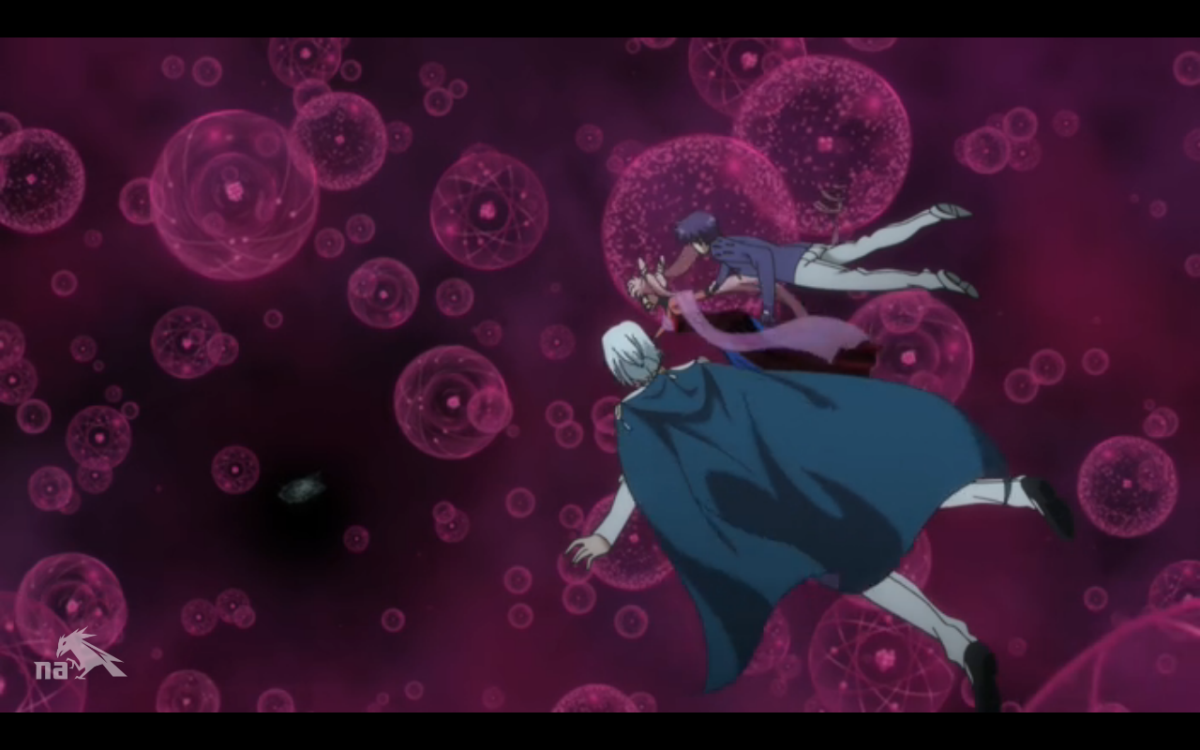 This is a bit of a non-issue, but it really bugs me that Black Lady’s bottom lip is pink but her upper lip is barely shaded. It makes her look really weird.

Black Lady takes them to Wiseman, who promptly and efficiently subdues their wills. He then shows off the Silver Crystal that Black Lady gave him. Uh-oh.

But wait! He can’t access its powers. Well, so much for that potentially compelling twist. They conclude out of nowhere that they need the past and present Silver Crystals to accomplish anything. It’s not like it’s been established over and over that the Silver Crystal responds to Usagi’s pure heart, and that merely possessing it means nothing—but sure, go get two Silver Crystals. That definitely ups the ante and in no way wastes our time.

Black Lady then goes Freudian to the max and tells everyone that she finally possesses the one she loves—her own father. 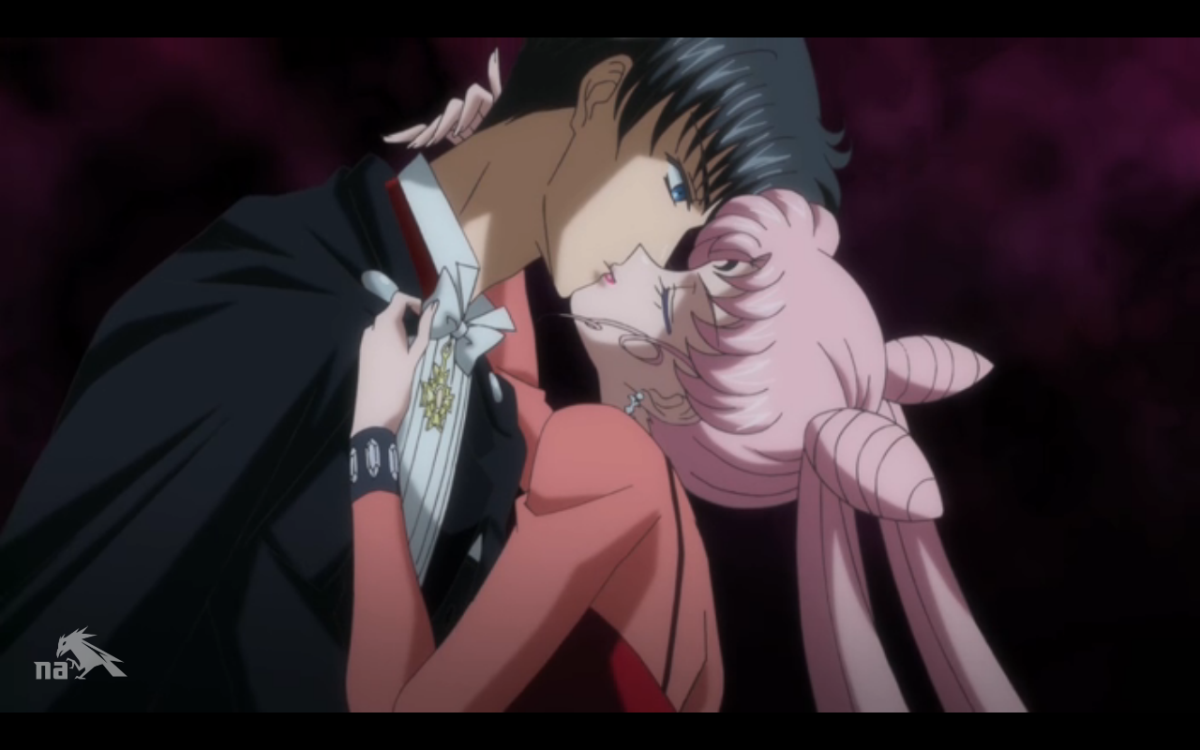 OOOoooookay. So in the original this whole Elektra complex was mostly Usagi’s jealous fears getting the better of her. She had to learn to trust Mamoru in order to become a better person and ruler. I’m not saying it wasn’t weird there, but it’s deeply, profoundly, inappropriately weird here. She kisses her own father full on the lips and refer to him as hers alone. Even though he’s clearly not in possession of any of his mental faculties – this is disgusting.

Right, we’re back, and Usagi is waking up in her bedroom with her friends all around in their school uniforms. Her mother tells her she fell in gym class and got a concussion. I was all set for this to be “just a dream,” which was annoying, but no, they really are back. Usagi’s faint ruined their whole endeavor.

The Senshi spend some time making fun of Usagi for snoring, which ha ha ha, let’s all make light of the situation and pretend like the world isn’t headed right for the dumpster. What a lark! And then Usagi admits she misses Chibi-Usa and Mamoru. Like this is some kind of failing. And they tease her some more, and comment on how it’s nice to see her smile—what? This isn’t the time for that! You guys have a huge problem! This isn’t the time for giggling and affirming your friendship, you idiots! 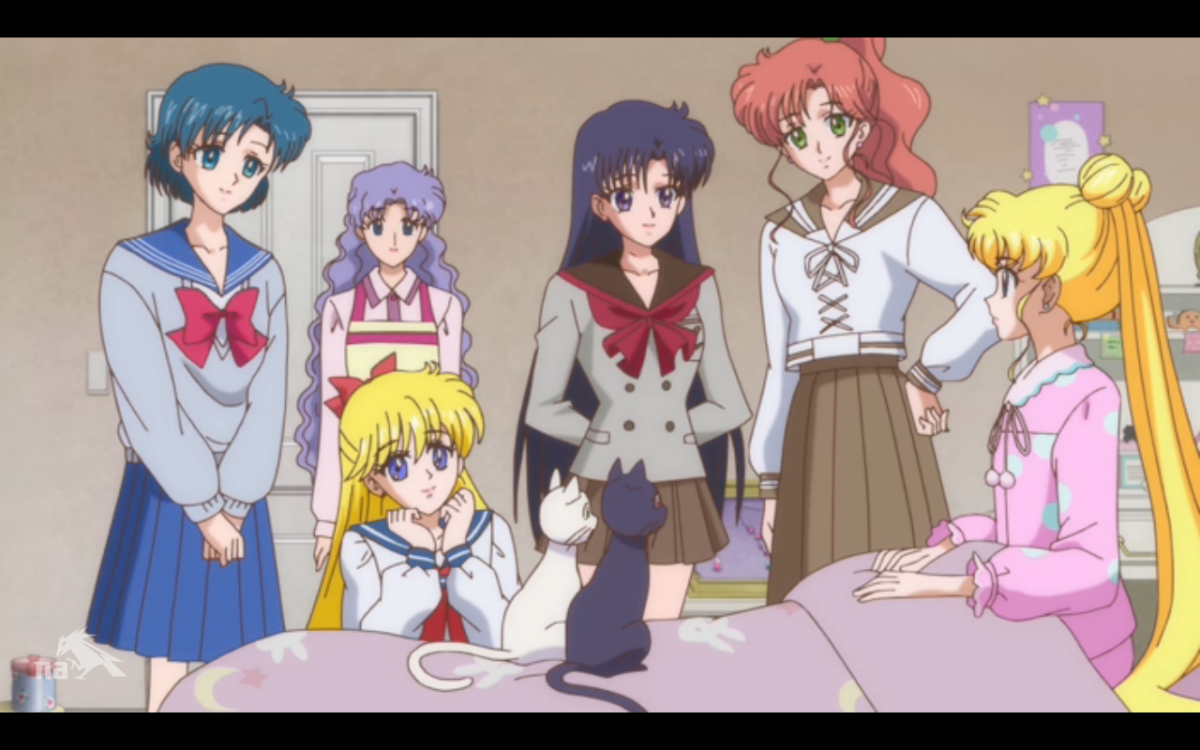 But no, they all gallivant off, telling Usagi to rest up. I can only assume that the writers hate narrative tension and want to destroy it at every turn, because this nonsensical series of feel-good giggles is then followed by the sudden appearance of the space-time key. Because why not? Why not just make plot happen for no reason at any time?

Oh, wait, but let’s not forget to break things up further with five transformation sequences.

We get ten seconds of the gang running in a concerned fashion back toward Pluto, like they should have done immediately, and then another cut. We see Black Lady confront King Endymion in the palace, where she informs him that only the royal family can enter—so why were the Senshi and the cats allowed to come in? UGH. 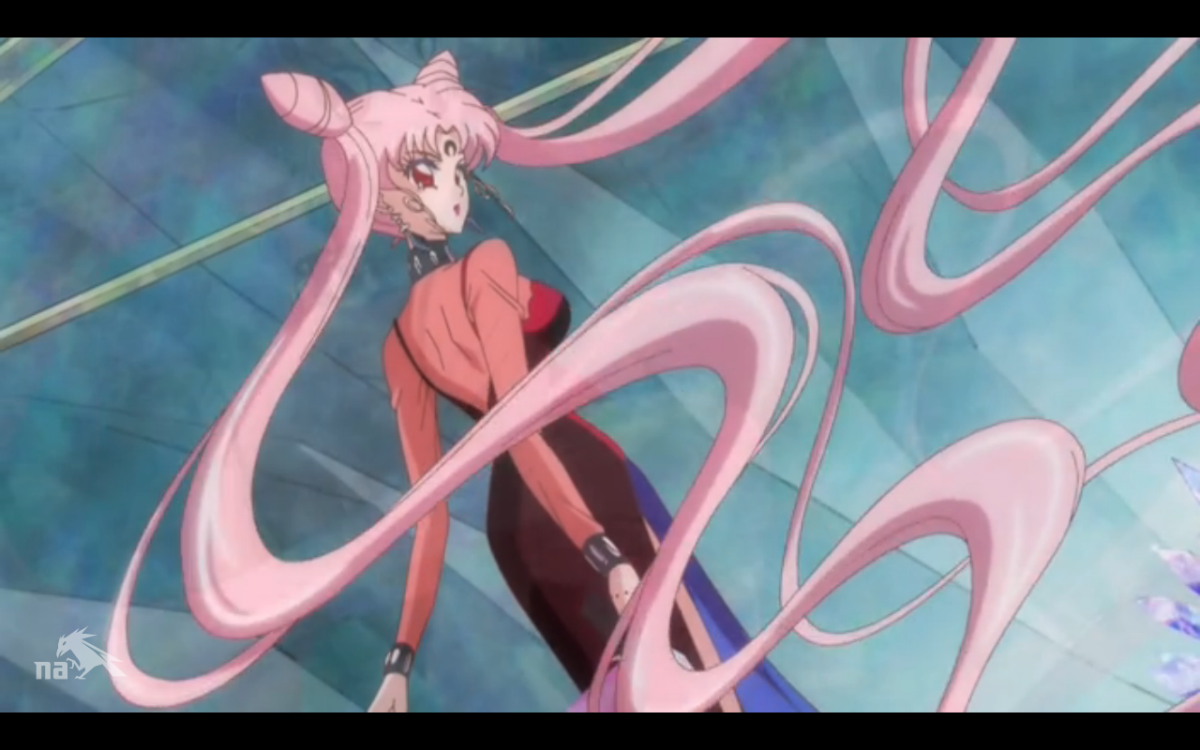 In the final moments we get the most truly unnecessary reveal of all time, yet one that seems to still surprise everyone: that Chibi-Usa is working with Wiseman and has become Black Lady.

And with that non-cliffhanger, episode 23 comes to a close. How is it that a show with 23 episodes feels like it has more filler than a show that took 89 episodes to tell the same story?