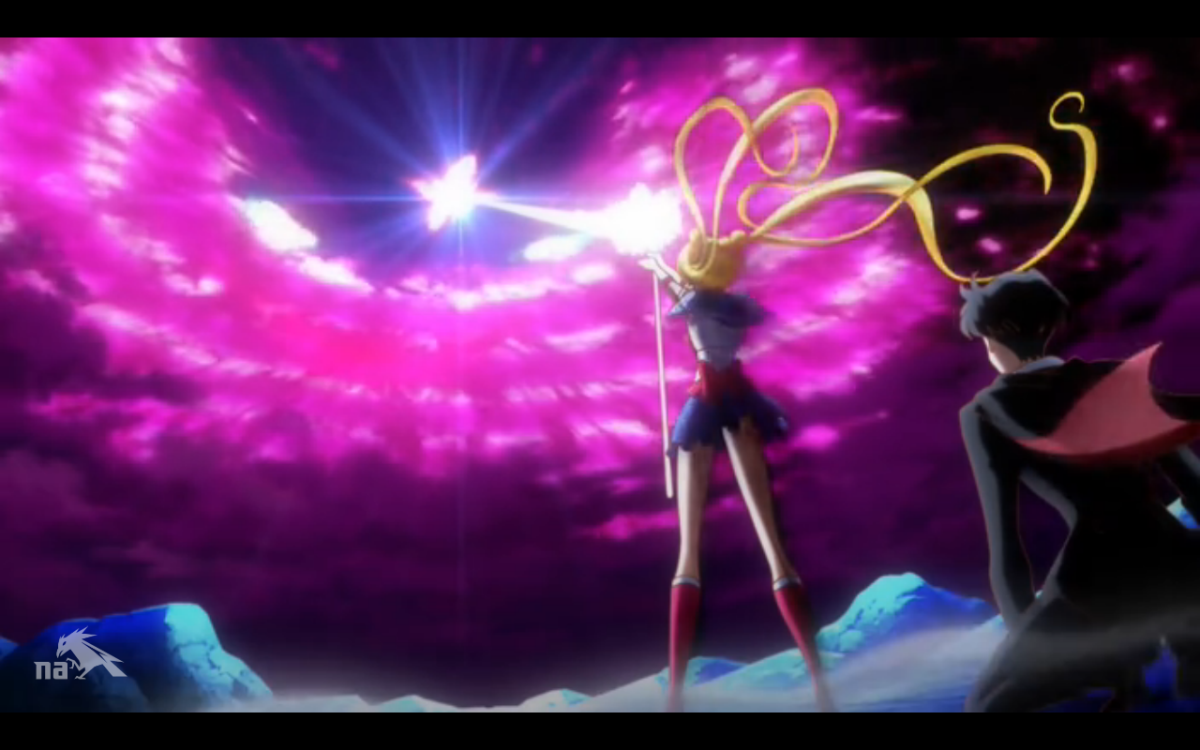 We left off with Usagi facing off again against Queen Metalia, this time in the new and improved regalia of her fully realized Princesshood.  She blasts Metalia with the awakened Silver Crystal, and it has…absolutely no effect.  Well, that’s not true.  It makes Metalia stronger.

Given that our entire experience with Metalia has demonstrated that she absorbs energy, this should not be a surprise.  Sailor Moon must find an alternative, but she doubts herself, which seems natural when you’re giving it all you got and it doesn’t work.  Tuxedo Mask tells her not to give up, which, okay, sure, but do you have a plan? 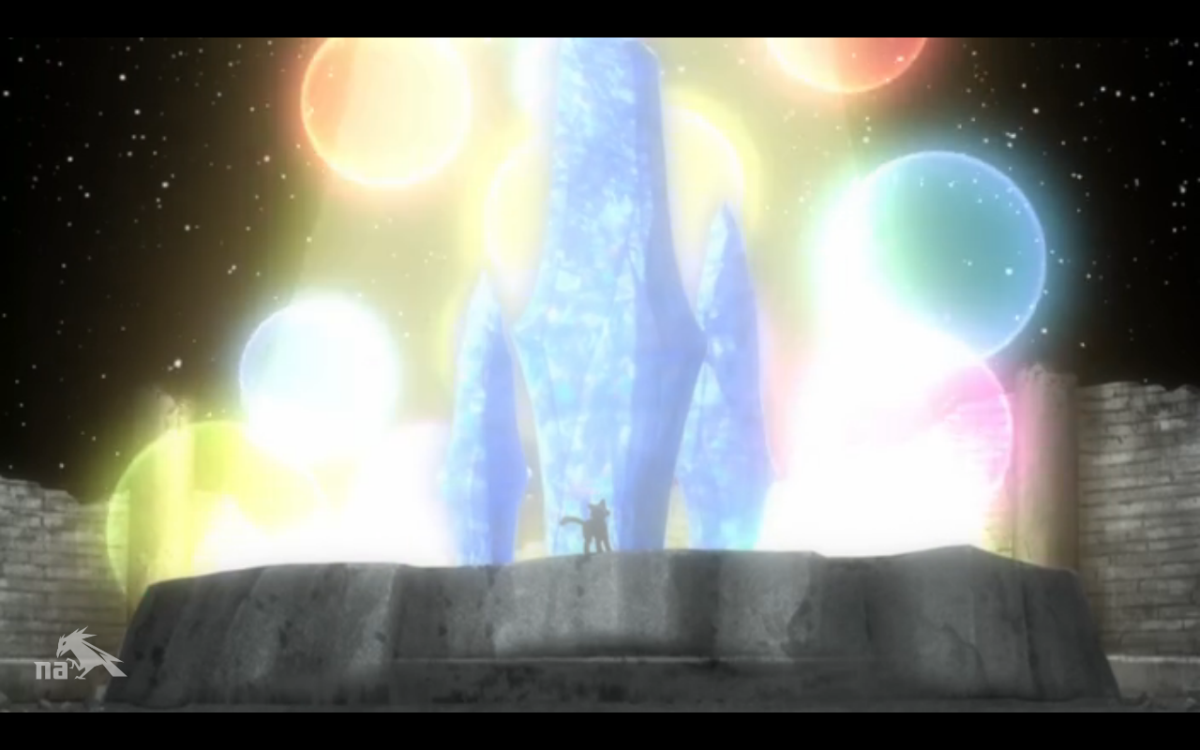 Luna does!  Ensconced on the moon, she nevertheless manages to reach out to tell Sailor Moon to pray.  I’m not sure how I feel about prayer being the key.  I’d have to know more about the translation to offer a full critique (now would be a good time to mention that I have several degrees in religious studies and am probably prone to over-complicating the matter).  However, I suspect what’s being translated as prayer doesn’t connote a specific religion, and is probably more akin to focusing one’s whole will or heart on a desire or hope. A generic type of prayer.  Still, this would be very interesting to examine in the wider context of Japanese religions and mythology, but I’ll spare you the dissertation.

Luna’s prayers unite with Sailor Moon’s, and the force of their determination awakens the sister crystal in the heart of the Queen’s prayer room on the moon.  The moon awakens to its former glory, and the purity of the power is enough to seal Metalia away for good.

All in all, it’s not unsatisfying, dramatically speaking.  The pace is good, but the message is murky.  Love and purity of intention and determination win the day, but so does “just hit the bad guy with more power until it goes away.” 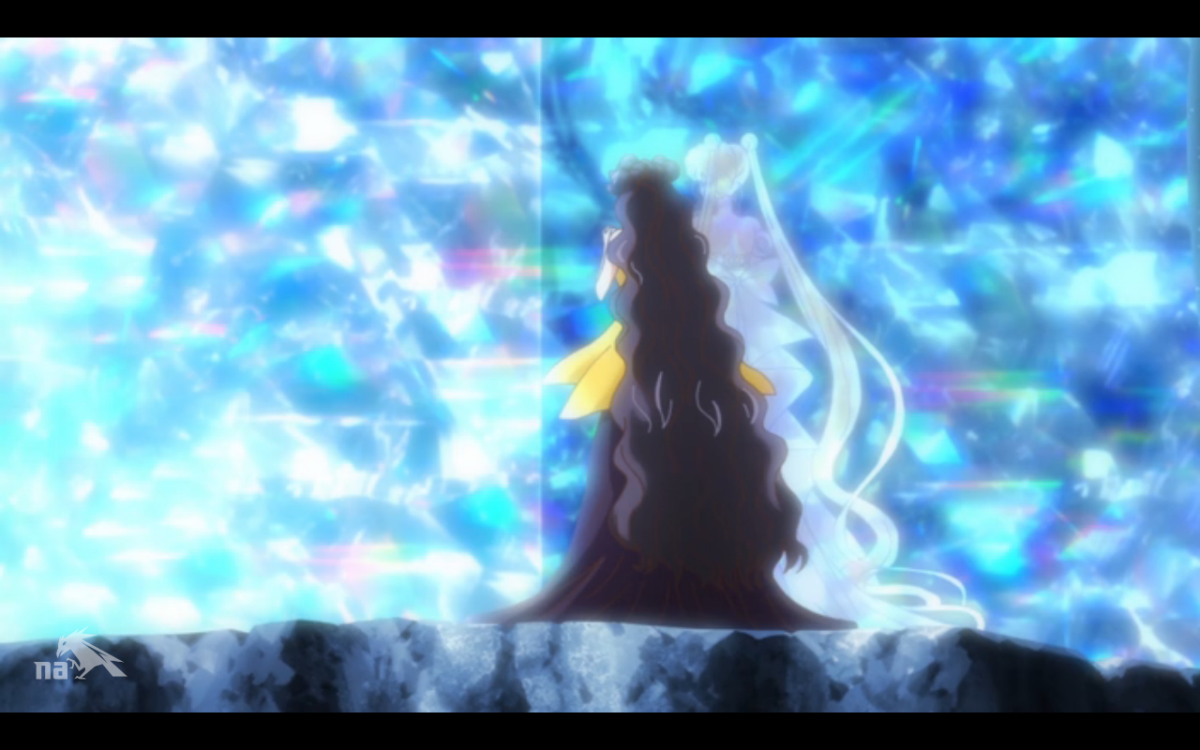 We get a momentary glimpse of Luna as a human woman before the crystal works it magic and returns the ruined castle to its former glory.  The Silver Millennium has arisen once more!

Her kingdom rises, but Usagi falls.  Her Serenity and Sailor Moon personas desert her, and she crumples to the ground as an ordinary school girl, her magic brooch broken.  Tuxedo Mask catches her and restores her with a kiss, and they finally get to embrace with the full knowledge of their past and present. 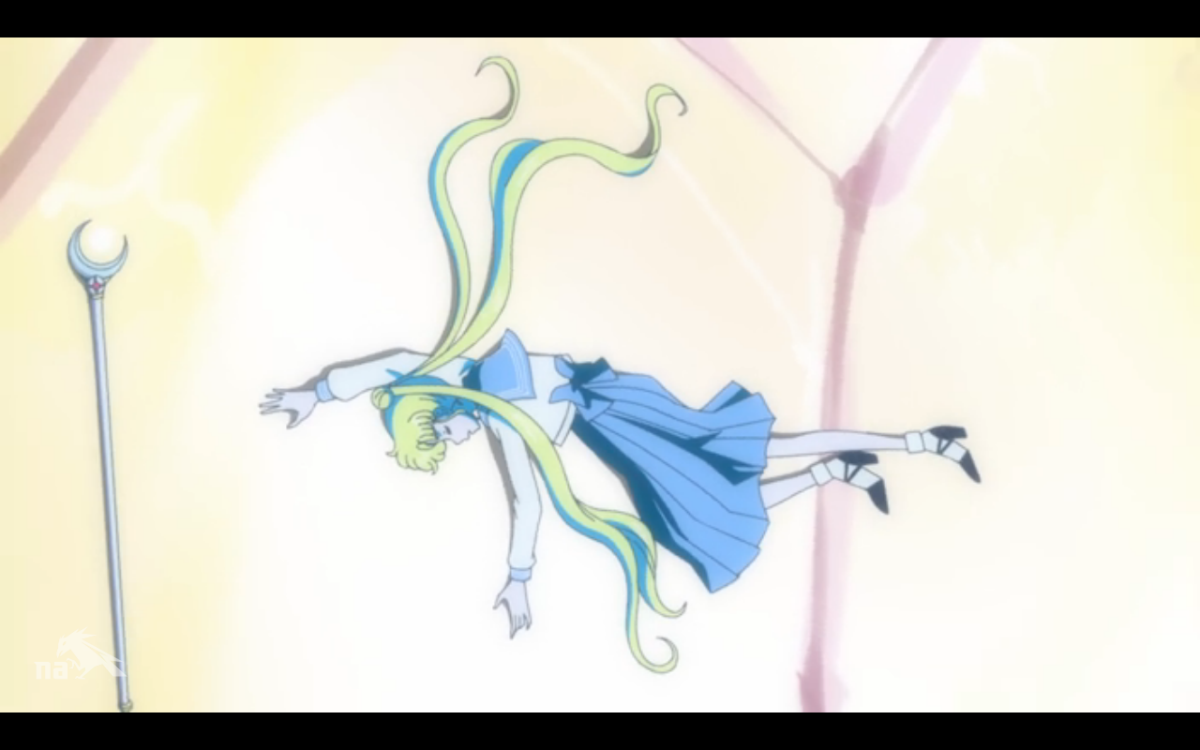 But what about the Senshi?  Endymion uses his power as prince of the earth to scan the world for the others (he’s Google Maps!), and finds them sprawled on some anonymous stretch of arctic waste.  Usagi nearly loses it, but Luna speaks to her from the moon and urges her to come back.  Using the power of the Silver Crystal and the Moon Stick, they return to the Silver Millennium.

They have a chance to stay there, too. Luna reminds Usagi that she is now Queen Serenity, and she can claim her place on the throne. But Usagi doesn’t want to be royalty. She has to go back to her family. Also earth is where Mamoru lives and where she and her friends were reborn, so that’s her home. 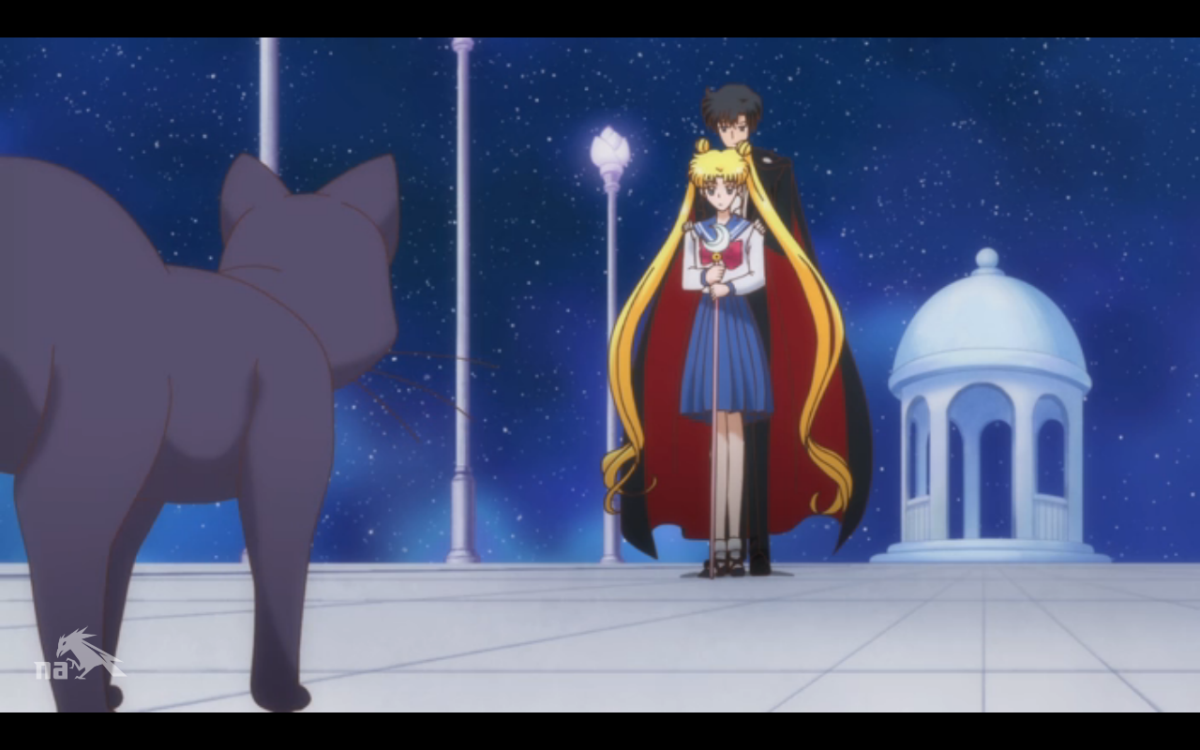 It’s a perfectly legitimate answer, but I’m a little perturbed that she doesn’t even want time to think about it.  I get that Mamoru’s apartment in Tokyo is swank and all, but she is the Queen of the Moon.  She has a goddamn magic wishing castle, and she can revolutionize the entire history of the world and change everything we know about science.

Then again, she also have no subjects. I’m not clear on the physiological differences, if any, between humans and moon-people, since while Usagi was born human, she also has the ability to function normally on the moon. Magic? Genetics? Whatever. It’s moot. She doesn’t want to repopulate her planet except in the old fashioned way, and she has her ghost/hologram mother’s blessing. The former queen appears, gives her a new brooch and a fond farewell, and disappears.

The new brooch will hold the silver crystal (hey, what a crazy random merchandizing opportunity!) and give her even greater powers than before.  Well, at least she didn’t give everything up for a man.  She transforms once more, and at last we have some tradition: they don’t bother to spruce up the transformation sequence, they just reuse the footage.  Yeah, tradition!

Sailor Moon heals the entire earth, including the other Senshi.  She can heal death?  Like, actual death and not oops-the-sword-hit-my-watch death?  Wow.  Okay.  I mean, maybe they weren’t dead-dead.  Maybe they were only mostly dead.  Even so.  Go Usagi.

The scene with Usagi and her friends running toward one another, startling birds into flight, is really well-executed.  It’s also of a type with the classic romantic reunion so often plagiarized from Gone with the Wind, with lovers racing to meet even a little bit sooner after sighting one another.  The girls all burst into tears and sink into a heap.  To add to the poignancy, Luna and Artemis join them, as does Mamoru.  (Fortunately, Mamoru just stands there and doesn’t impose.)  The little family is complete once more. 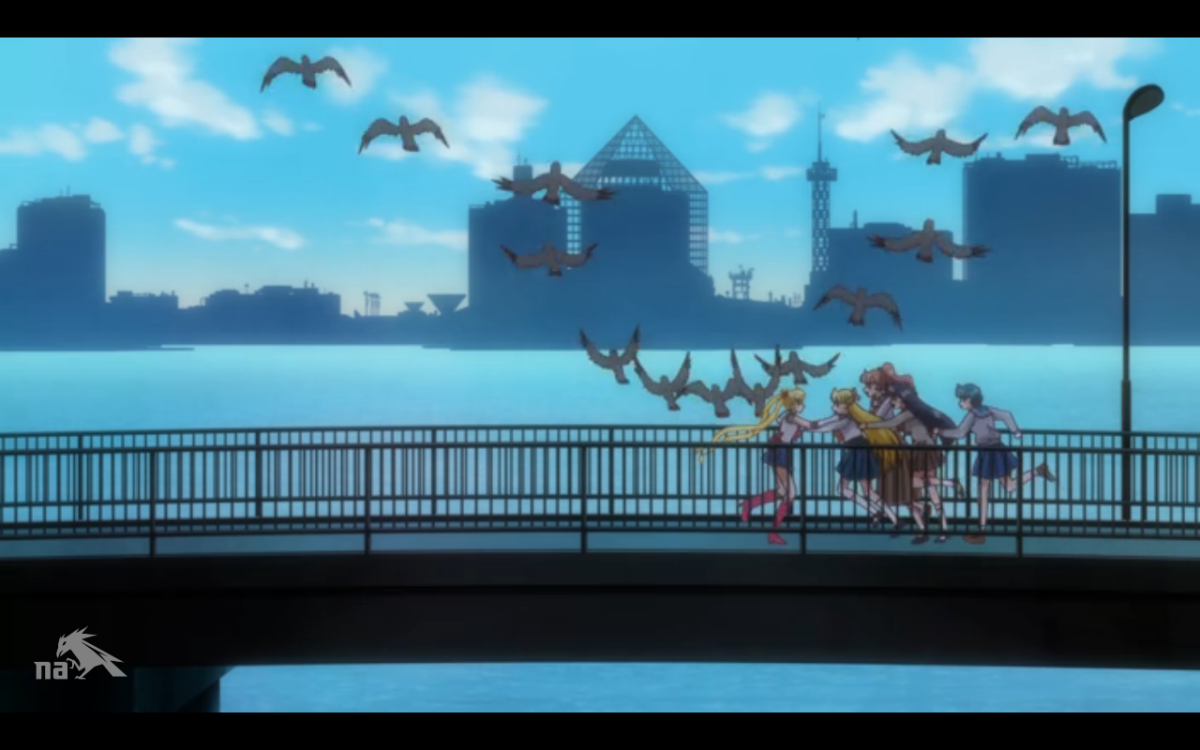 Usagi says, “let’s go home” with a brilliant note of finality, which is then spoiled as we fade to watch a seagull soar across the bay and over the city.  A.  Seagull.  Could we not have sprung for some doves here?  Segulls are loud, dirty pests of the sea.  They are not suitably majestic and they have no symbolic resonance for this show. What a wasted opportunity. The only way to redeem this would be to have Luna pounce on it. 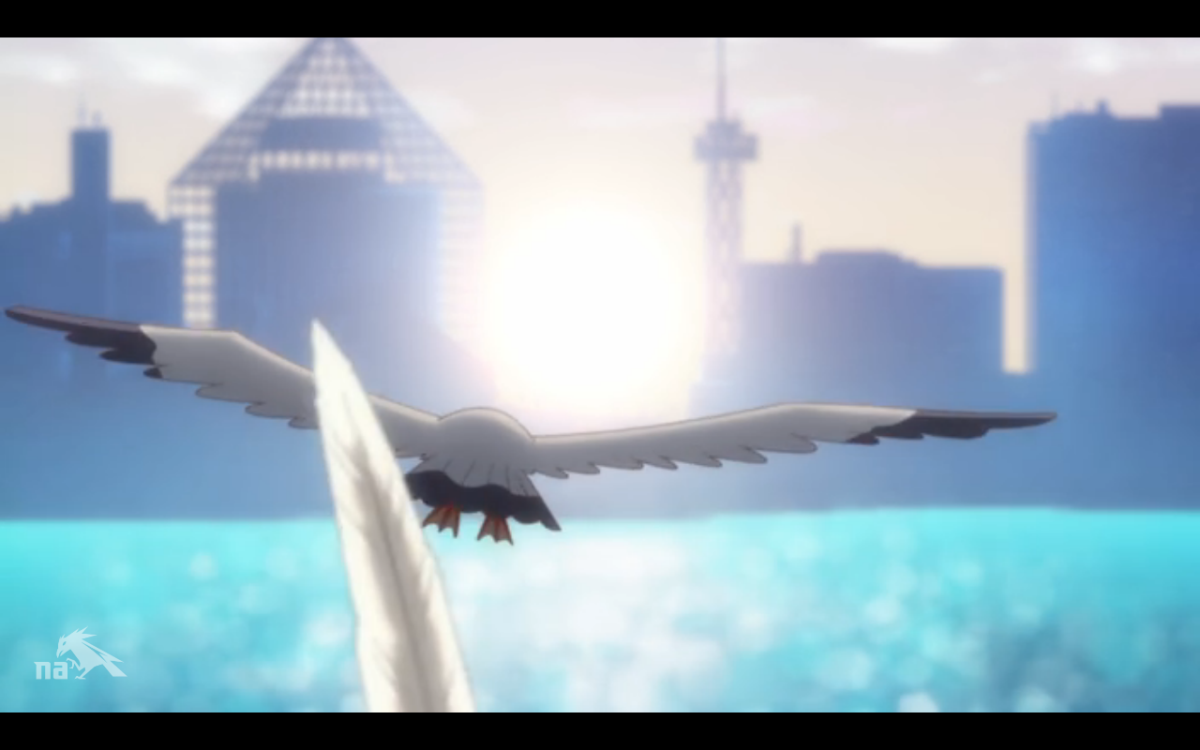 There are a few shots of the girls resuming their normal lives in brilliant sunshine, meant to convey that they are glad to have left the darkness behind.  (Why you would want to go back to being a middle-schooler in Japan is beyond me, but I’ll accept the more general premise that simplicity and anonymity is a welcome change.)  Mamoru and Usagi are happily reunited, and they finally exchange the watch and handkerchief they’ve been holding for so long, like a knight and his lady exchanging tokens.  Awwww. 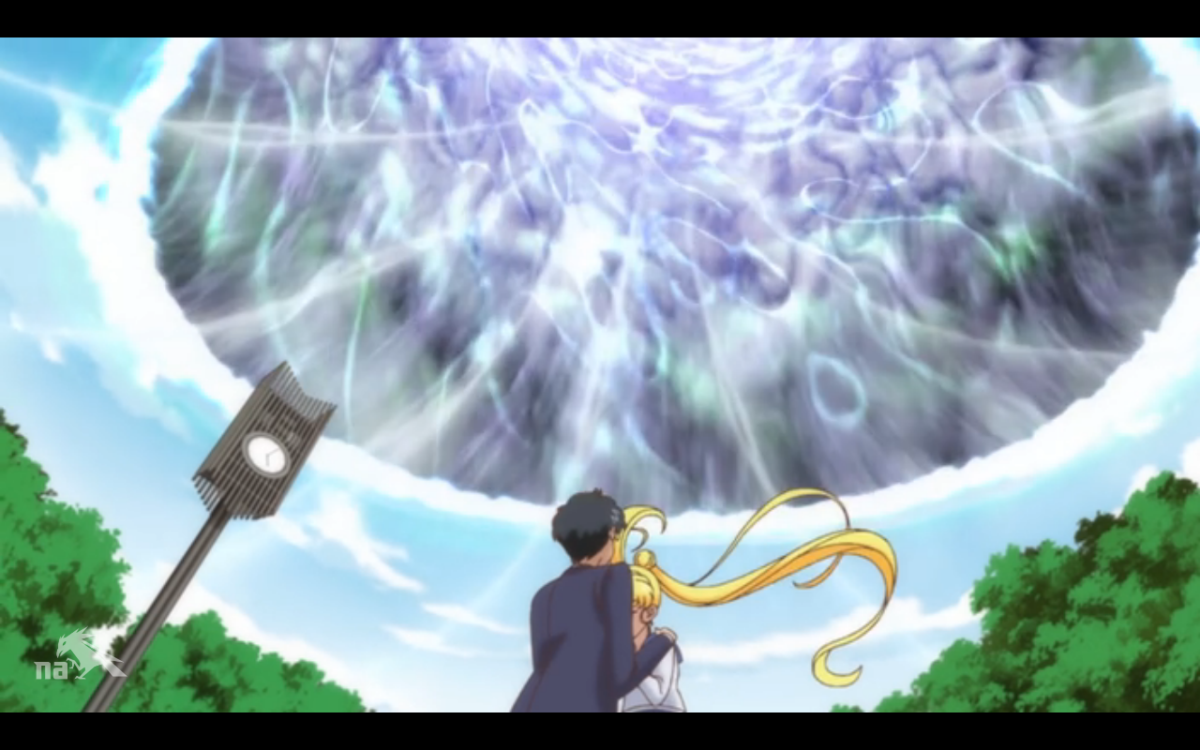 But wait!  A giant portal opens in the sky, and spews out a little girl!

This is so far out of left field, even though I’ve seen the original and know what’s going on, that I can barely convey how jarring and strange it is.  Hey, a pink-haired pint-sized version of Usagi!  And she pulls out a gun and demands the Silver Crystal!  Ha ha ha, guess you’ll have to tune in to find out what happens next! 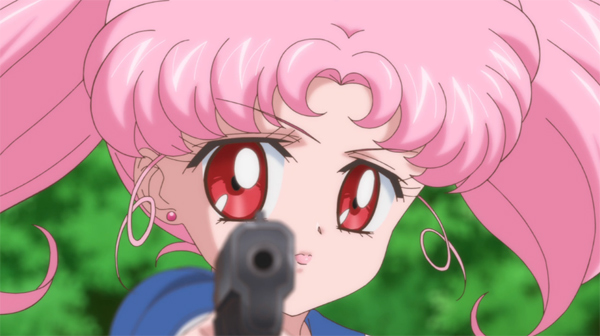 Besides being an awful excuse for a cliffhanger, since it depends on a random threat rather than a compelling climax, it’s also the final wasted opportunity to take stock of Crystal and how it is and is not the heir to the original Sailor Moon.  There’s no reflection, just a super-ultra-happy ending for everyone except the Four Knights who Mamoru completely forgot to mention while his bae was resurrecting the planet.  What a douchebag.

There’s also the matter of chibi-Usagi, aka Ms. Pink Hair, having a gun.  This is a show that managed to have its combatants resort to swords and lightning bolts, and now you’re telling me that the villains could have just gotten guns and cold shot the girls?  I know they were a bit technologically illiterate, but if they could work a radio station, they could have gotten a couple of glocks. The presence of the gun changes the whole nature of what is and isn’t possible in this universe at the last minute.  It’s a thoughtless way to amp up the tension, which I guess is an appropriate way to end this series.  So many things about Crystal were rushed, ill-considered, and ignored.  So many things were sacrificed in pursuit of a reboot that would please everyone, and ended up pleasing no one.

Crystal, I wanted so much more from you.  You tried, but trying isn’t enough.  So thanks but no thanks, blatantly manipulative ending, I’ll be going back to the original with a few lessons learned and an appointment with my optometrist, to make sure all this eye-rolling hasn’t done any permanent damage.

Next week: on to the second arc! Same as the first arc.