UGH FINE.  There’s more Sailor Moon, and I’m inexplicably drawn to it, so prepare yourselves for the next arc, the Dark Moon saga (in the original, Sailor Moon R). 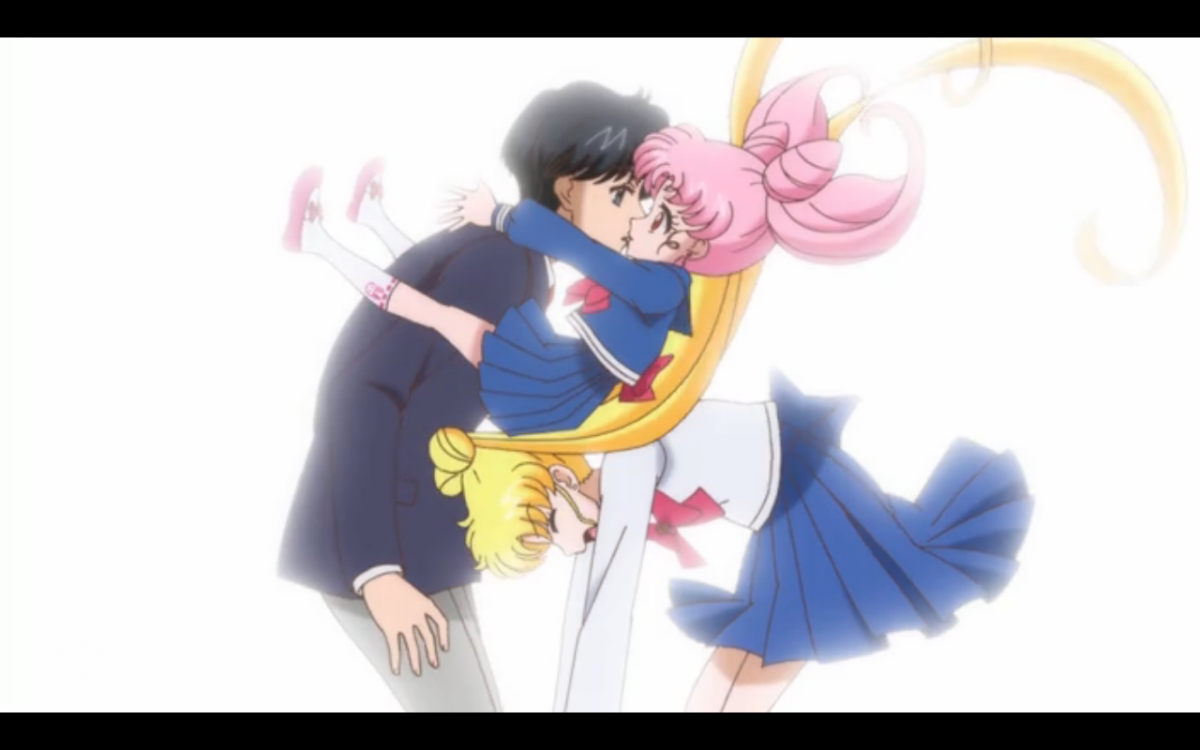 When last we left our dubious heroes, a tiny pink-haired girl was pointing a gun at Usagi’s head and demanding the Silver Crystal.  We resume at that same moment, only now we get to see Mamoru pull the girl’s hand away.  But the gun goes off!  But it shoots out roses, because it’s a toy!  Craziness!

The girl runs away before explaining, even though Mamoru could at least have tried to catch her, given that he’s got at least three feet and a hundred pounds on her.  Sailor Moon was unable to lend a hand, because she fainted.  Fainted.  Ladies and Gentlemen, the great heroine Sailor Moon has become a Victorian trope.

After the slightly altered intro and unaltered theme music, which I find unbelievable generic but also irritatingly catchy, we join the Black Moon Clan, Rubeus, Esmeraude, Saphir, and their leader, Prince Demande.  (What I would not give for some connection to the “Kingdom of D” from episode 4, which apparently was the best for rare gems.)  The original waited a long time before revealing any hint that Rubeus had siblings, which made the reveal a little more convenient and a little less intimidating.  Then again, it’s not very intimidating here, either, with the siblings hanging out in a gloomy, empty room, drinking wine and debating how to regain their former glory.  That’s basically grad school, and it’s not scary, it’s depressing.

Rubeus volunteers tot do something ominous about the Silver Crystal and summons the Spectre Sisters, four sisters who each control an element, much like the Senshi.  This connection was not so obvious in the original, and I like the symmetry here.  I also appreciate the subtle shift in Koan’s design–her hair in the original gave her slight cat ears, but here her hair is done up more like Sailor Moon’s hair buns, albeit pointy.  It’s not that one is better, but it demonstrates that some thought went into remaking the new Spectre Sisters, even if they do look mostly similar.

The original bun-head is recovering from her faint, and immediately wants to go after “chibi-Usagi.”  It’s a bit of a stretch to give that nickname to someone who just had you at gunpoint, but I’ll allow it.  Mamoru tells her that it’s a bit early to label her a villain, which is a line that knocks right up against the fourth wall.  Usagi’s talk about “our new enemy” is a bit fourth-wall breaking too, but mostly is just makes me sad.  The second session of the original, which Crystal entirely skips, has the Senshi oblivious of their previous valor, living ordinary lives.  Because of a new enemy, they had to remember to their past, and all the pain and death.  It was a very moving part of an otherwise uneven season, and while I don’t fault Crystal for skipping a season two remake, I do miss the depth and pathos. 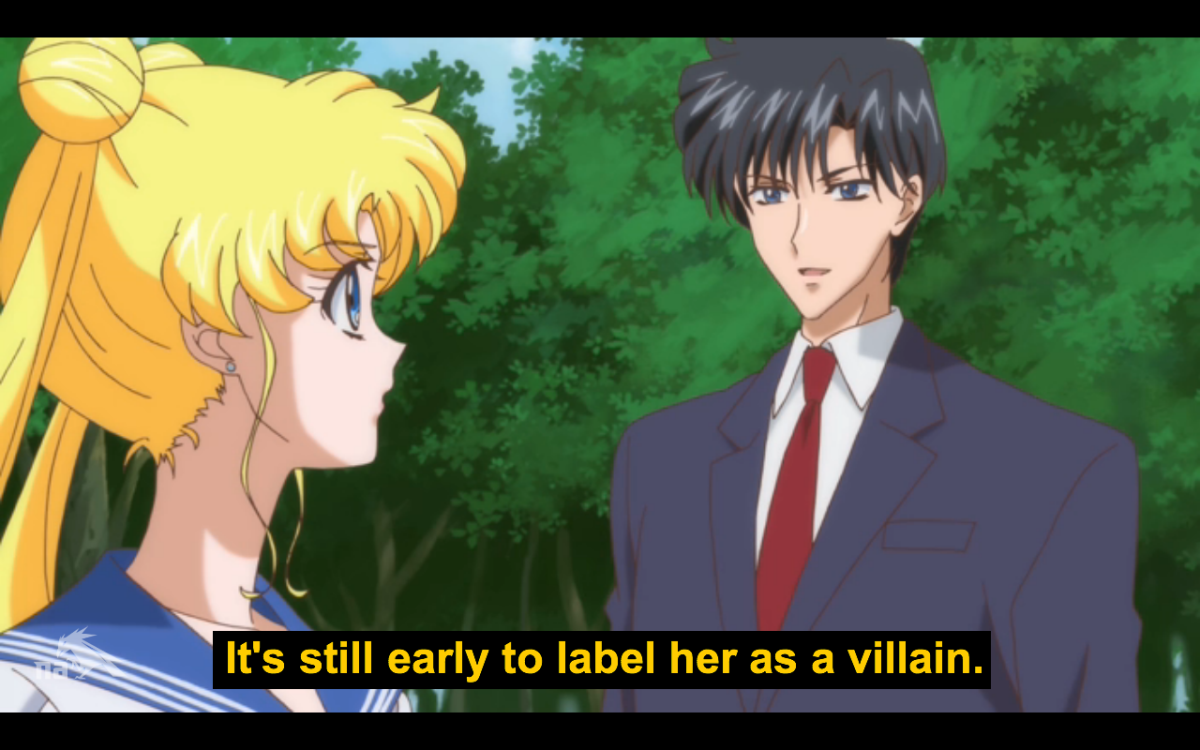 Which this episode so far lacks.  Chibi-Usagi ran about ten feet away, which somehow Mamoru didn’t see, and is just sitting on a swing.  He then offers to walk her home.  This kid just threatened to murder your girlfriend.  With a toy gun, but still, you didn’t know that..  And then this same strange little kid gives you a hug and doesn’t say anything?  Mamoru, you are the dumbest asshat on the planet. 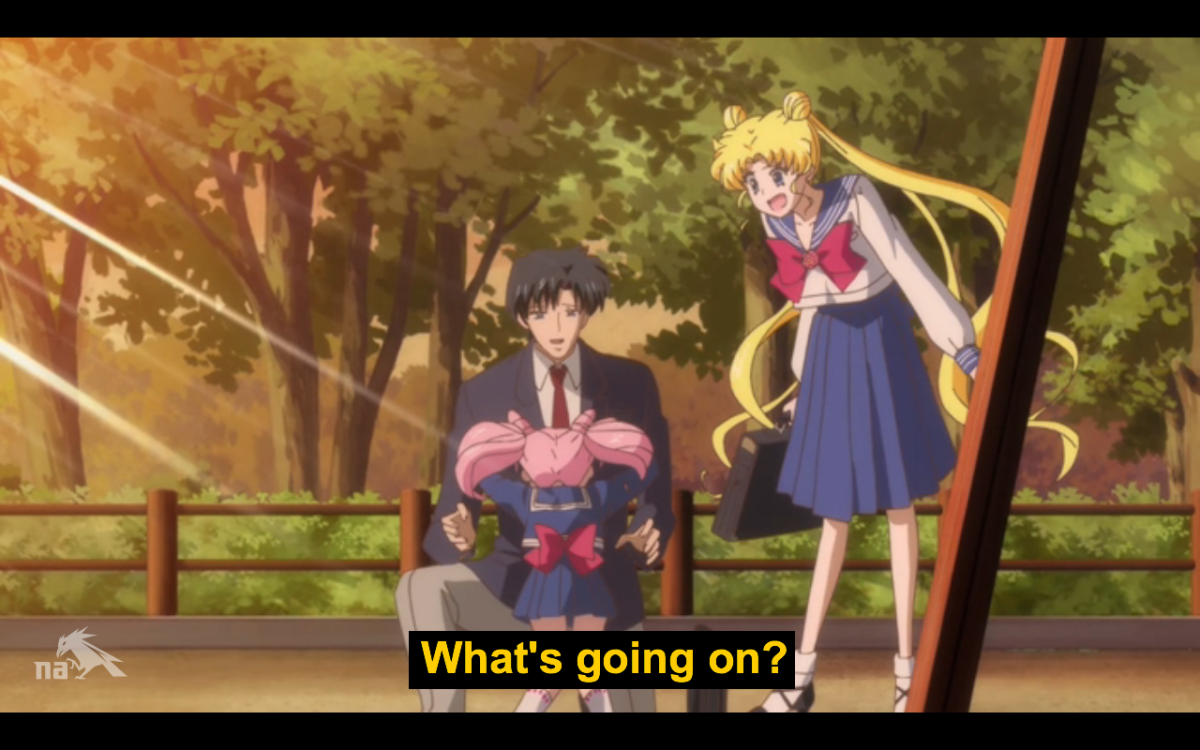 The dumb asshat carries her to Usagi’s place, where they get to explain to Luna that yes, a human child fell out of the sky so they’re keeping her as a pet.  Luna is saved, I assume, from yelling at them by chibi-Usa running to meet Usagi’s parents.  She then hypnotizes them into believing that she’s actually their niece; only Usagi and Mamoru are immune because Luna bonks them very satisfyingly in the face to break the spell. 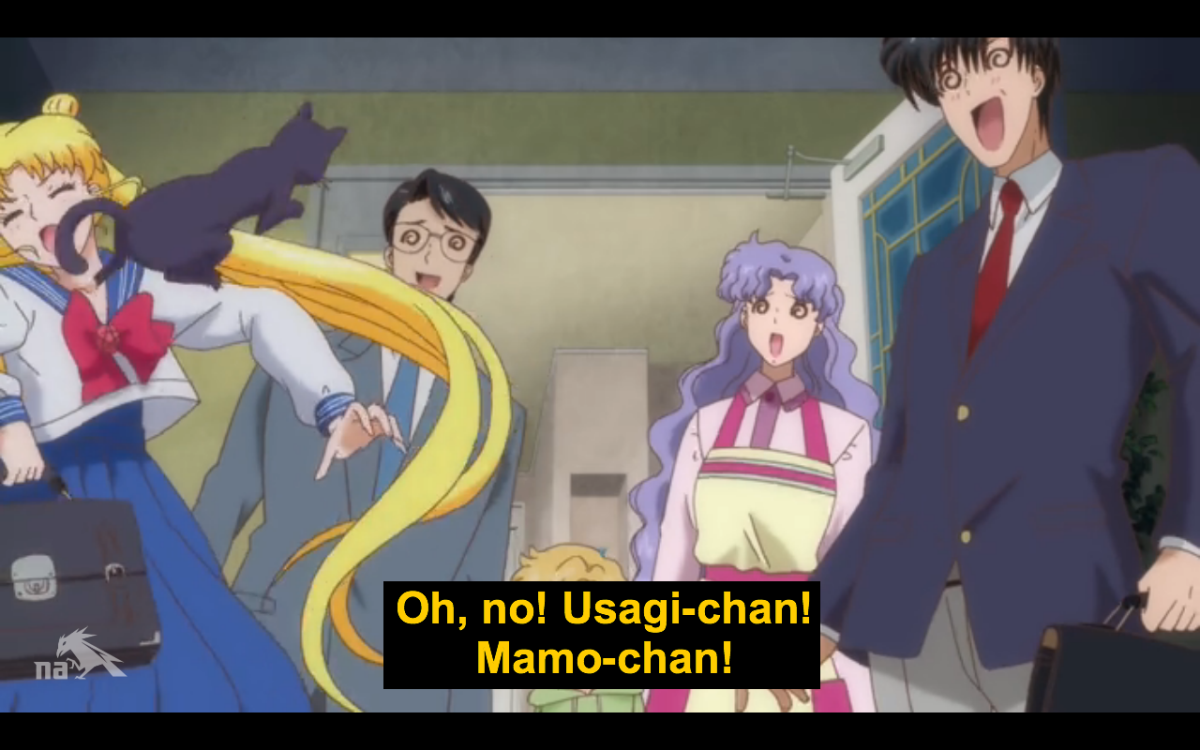 These kind of hijinks worked in the original because they weren’t isolated.  In this more realistic universe, hypnotizing people by spinning a swirl-pattern umbrella can only work on a nostalgic level for those of us who have seen the original, and all it does in that case is to remind us how much less dynamic the animation has become.  Crystal, you still need to distinguish yourself.

Luna, sagest and sanest of cats, wants to observe chibi-Usa further after she sees what looks like the Silver Crystal around her neck, which is impossible, since Usagi has the crystal in her brooch.  She gets new merchandise–erm, new transformation pens and communicator watches for the girls, meaning that they can be Senshi again.  They all seem thrilled at the prospect; why didn’t they ask about it before, then?

Rei runs off afterward to go help the “Supernatural Research Club” for the upcoming school fair.  The club, comprised of completely average students in what is probably the biggest wasted opportunity thus far (imagine the humor that could have been injected here!), has gotten her to do fortune telling, which they think will pair well with their pictures of UFOs and report on spontaneous human combustion.  Besides being thematically relevant for the show, why exactly would you combine these things?  Oh, forget it, at least they’re doing a halfway decent job of foreshadowing.

Rei goes on to tell fortunes at the fair, but is interrupted by reports that the rival club has a fortune-teller who foretells how and when you will die (Machine of Death, anyone?).  After running to tell on the girl, who is actually Koan, Rei encounters a group of nuns, one of whom has a dark moon on her forehead.  Then she smells something burning. 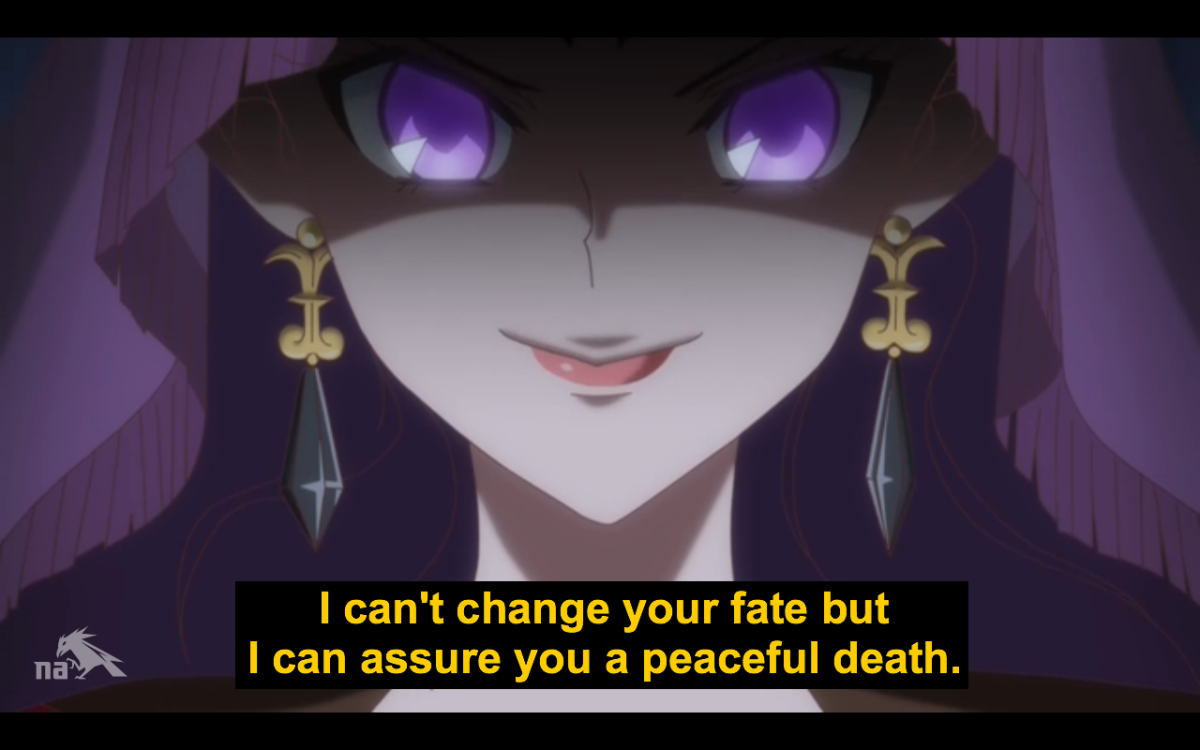 A body.  Twisted and on fire.  A nun has been burned alive.

Wow, I was not expecting them to go there so graphically.  Good on them for bringing the dark into the Dark Moon. 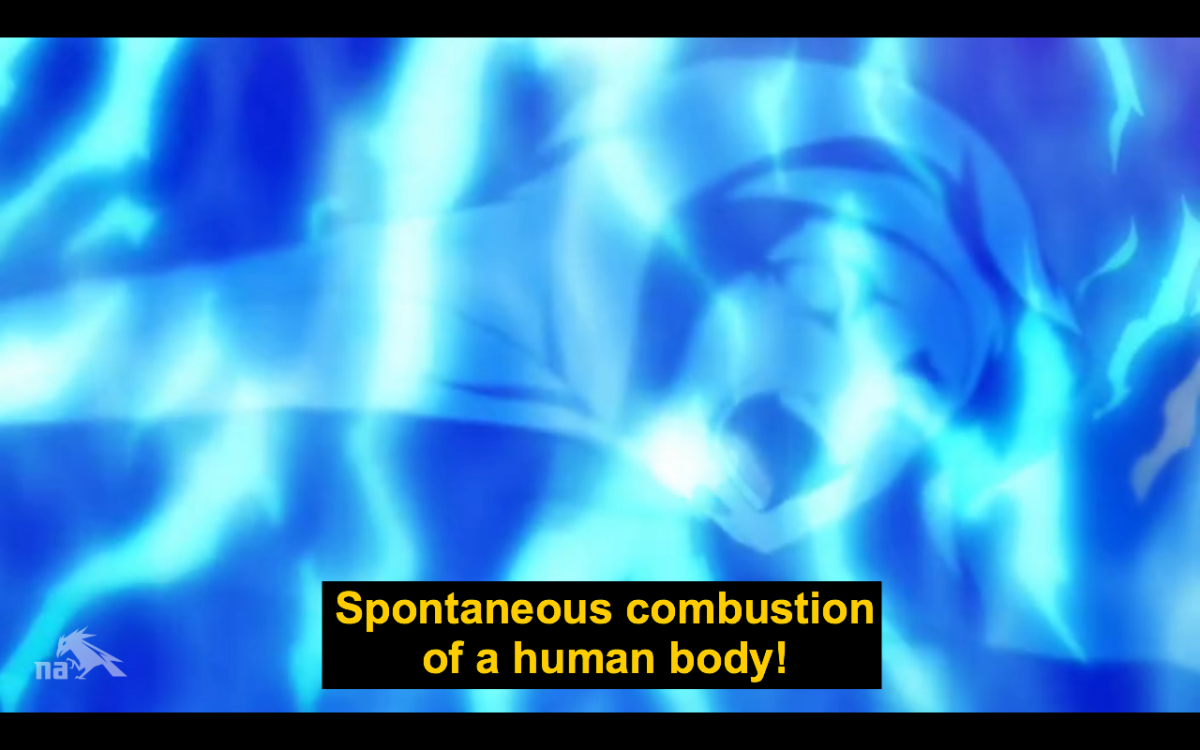 Crystal then proceeds to ruin the mood with the transformation sequences, which are just as clunky and uncanny valley as ever.

They all get upgraded attacks, which work super well against the…zombies?  Droids?  Mannequins?  Minions.  We’ll call them minions.  The attacks fail to do any damage to Koan, though.  She even laughs off Mars’s Burning Mandala attack, which is not nearly as nifty without the sound cue (does anyone know what that sound was in the original?).  She then sets Mars on fire, and Mercury’s Shine Aqua Illusion cannot quench the flames. 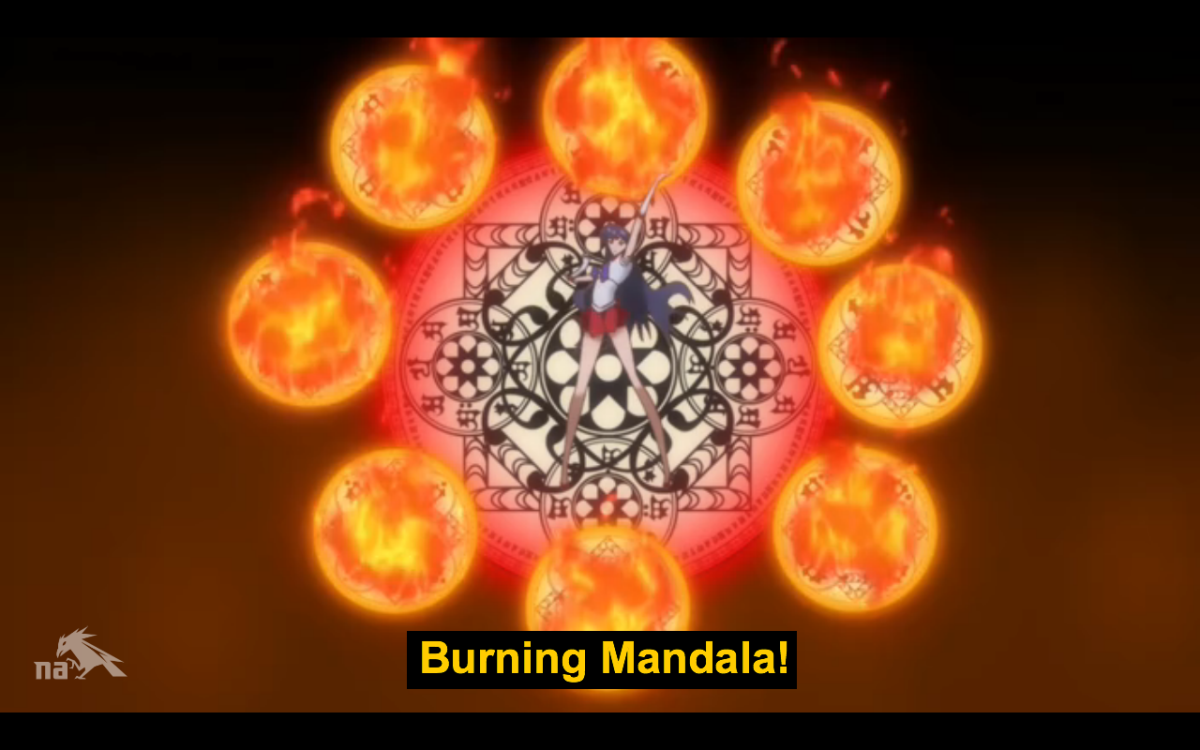 In the original (gosh a lot of my sentences start that way), the Senshi got upgraded attacks because they realized something vital about their personalities or found new reservoirs of resolve.  Their outer power was intimately tied to their inner strength.  Here, though I admire how succinct it is, they only get power ups because the Moon Kingdom is strong again.  Yes, they were involved in restoring its strength, but they haven’t really evolved as people.

Cue Sailor Moon’s tiara, which clearly needs that upgrade, too, since it not only bounces off Koan, but Koan also sets it on fire before hurling it back at her.  Sailor Moon is about to be crispy-Moon, but Tuxedo makes a rare useful appearance and knocks it away.  They then stand helplessly and watch Mars burn.  Only by accident do their hands meet and produce her new weapon, the moon rod. 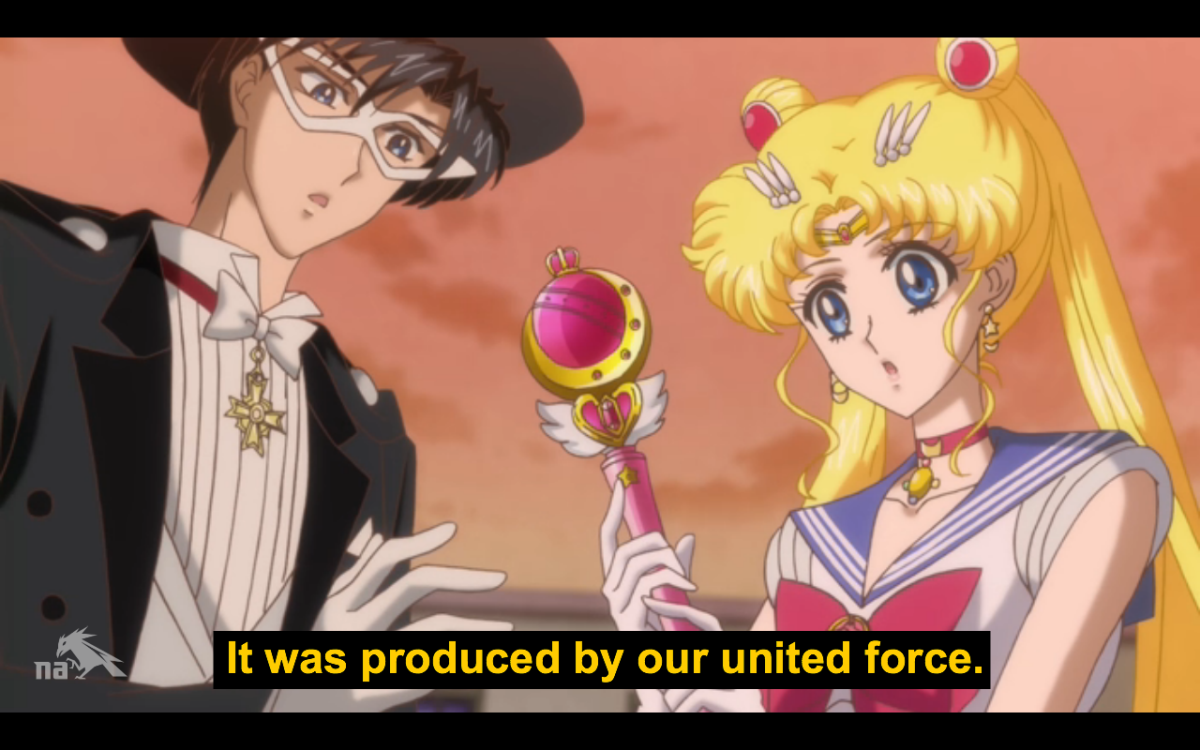 Gee, the “…rod was produced by [your] united force.”  Am I the only one with the dirty mind or was that kind of pushing it?

Then comes the biggest disappointment of the episode: Sailor Moon’s new attack destroys Koan.  Sorry for the spoilers, but in the original (at least it didn’t start the sentence that time), Koan has a complex arc of love, betrayal, and ultimate redemption that leaves her sympathetic toward and finally friends with the Senshi.  She (and the rest of her sisters) aren’t killed, they’re healed, and left to lead ordinary lives together (the greatest fate that show could imagine), free of the malice of the Black Moon Clan.  Here, she’s just dead.  It’s not even a particularly great death, she’s just scoured away by the moon rod’s power.  What did Crystal gain by doing things this way?  Because they lost a whole lot.

Perhaps with unintentional symbolism, Koan’s death does not release Mars from her inferno, and Rubeus appears to finish her off.  But Prince Dimante makes the entirely sensible decision to take Mars captive rather than kill her, since they need information, and the episode ends with Mars being spirited away (ha ha, just kidding, that movie was much better than this show).

Next week: Will this kid suddenly be relevant, or was his appearance today just to bolster Mamoru’s rep? 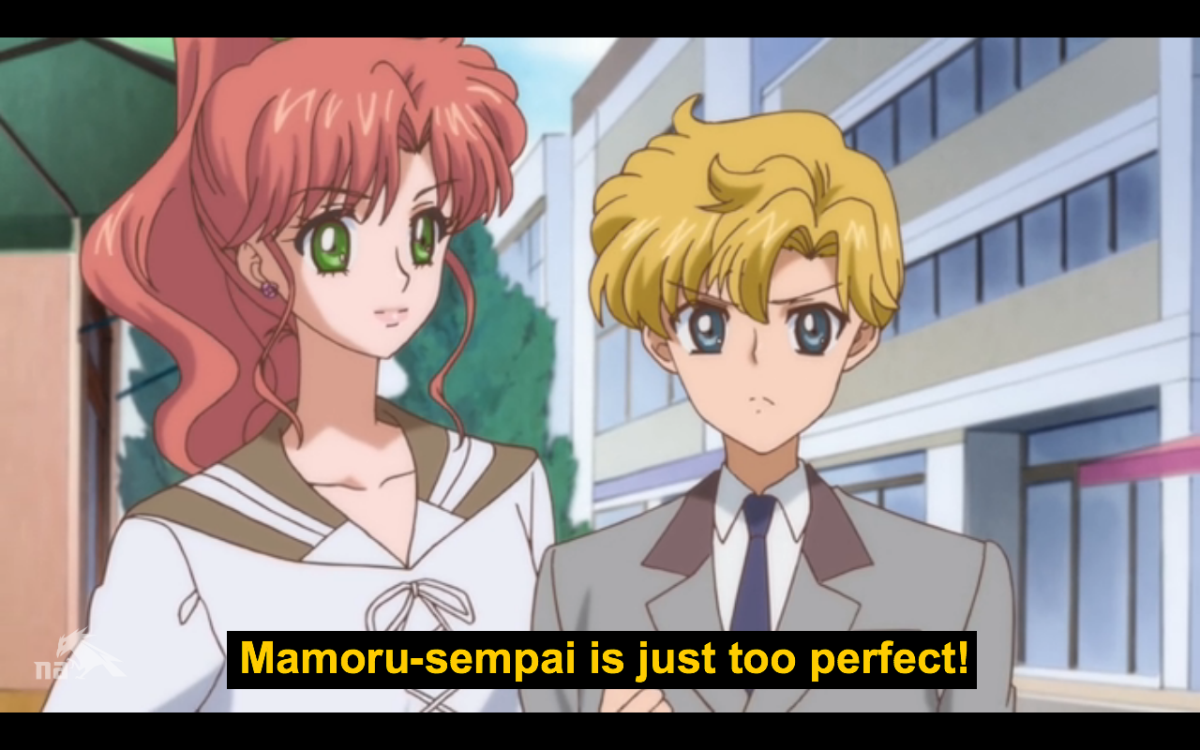 (Seriously, what was the point of this scene?)