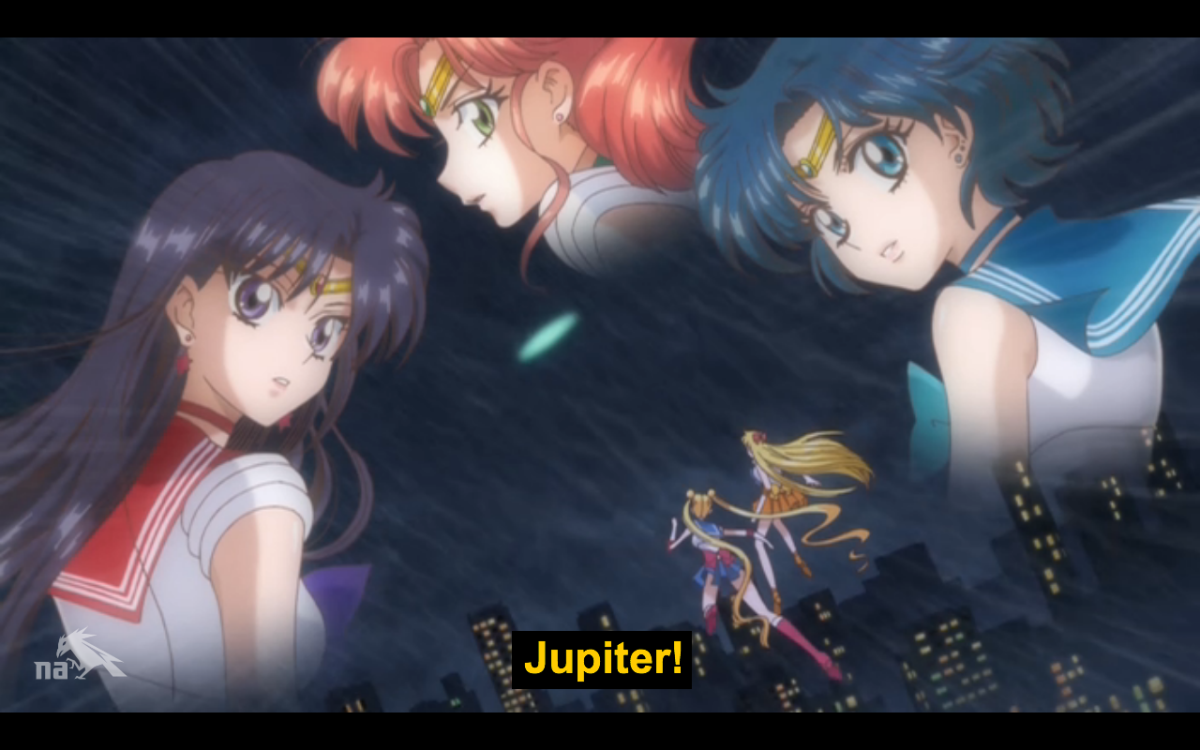 This week’s Sailor Moon Crystal begins with an extremely extended sequence trying to cheer Usagi up, even though two of her best friends have been abducted to parts unknown, and she should probably be allowed to be sad.  It starts with Chibi-Usa lending her a doll, and ends with a long arcade scene in which Chibi-Usa is really good at video games and Usagi is pretty bad, and they fight.  They also both get really excited about receiving a stuffed Sailor V doll, which is pretty strange, considering that the real Sailor V is standing right there. 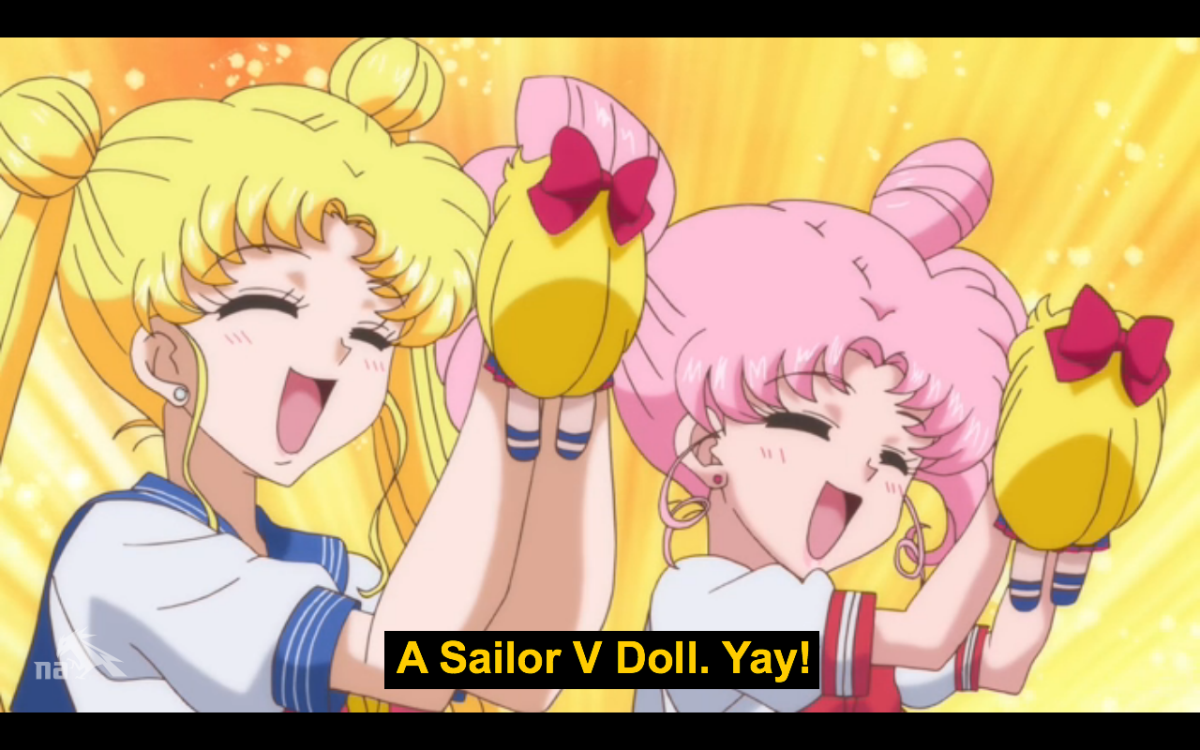 Taking charge and reminding us of the urgency of their mission, Minako summons the remaining Sailors to the secret hideout.  It turns out that they still have no idea how to find Rei and Ami, but at least Minako makes the surprising-but-still-reasonable leap that the Black Moon Clan must be after Chibi-Usa, aka, “Rabbit.”  Thank you, thank you Crystal for not dragging that one out.

Rabbit/Chibi-Usa has gone home by this point, but when she sees Usagi’s parents acting affectionately, she becomes lonely for her own parents.  She wanders out into the rain and runs across Mamoru, who comes over to her.  He taps her on the shoulder as she’s holding the silver key, and it gives him a vision of Crystal Tokyo being destroyed. 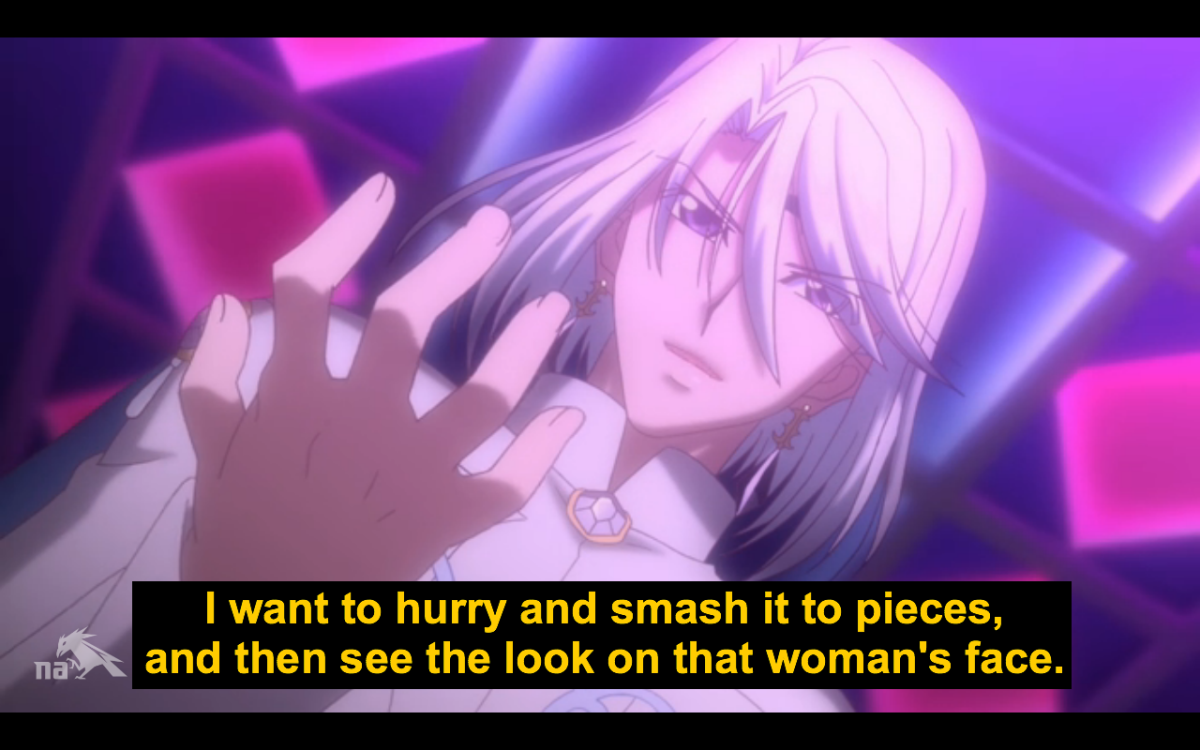 Speaking of destruction, on the Black Moon we see Rei and Ami in stasis, and Demande comments on how they might be like the queen, remaining forever young through the power of the silver crystal.  This avoids the implied reincarnation of the original, which had different versions of Usagi & co. ruling 30th century Crystal Tokyo.  Demande wants the Silver Crystal for himself–big surprise–but not to take its power.  No, he doesn’t care about youth or immortality.  He wants to destroy the crystal utterly.

Nice to see a real scenery-chewing villain on Crystal.

Petz appears to make her threat on Jupiter, whom she shows to Demande by turning on a screen below his feet.  It’s perhaps not the most effective way to watch TV, but in terms of showing maps or tactical deployments, I actually think a floor screen could be a really cool device.  It’s also symbolically effective, putting Mako literally under his feet. 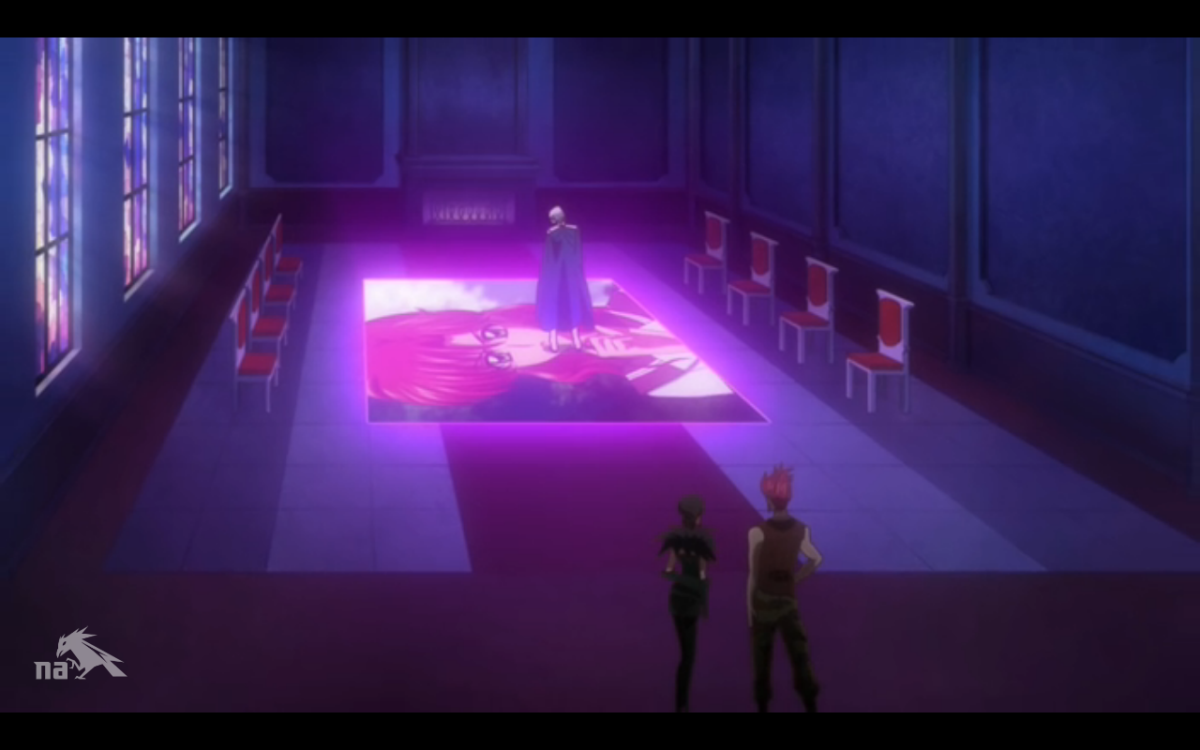 Oblivious to these machinations, Mamoru and Usagi are talking things over at a cafe, trying to figure out what to make of Chibi-Usa and the Black Moon.  It’s nice to finally see them spending time together and working through their problems by talking, rather than with botched suicides.

With three episodes and a great deal of plot progress under our belt, I think I can safely hope that Crystal is skipping one of the stupider aspects of the original, namely Mamoru’s fake breakup (fakeup? I feel like this happens so often in anime that it does warrant its own word) with Usagi.  It was one of those things that could have been avoided–and was eventually resolved–with 30 seconds of dialogue.  Mamoru only broke it off because he was protecting Usagi!  So brave!  So tragic!  Oh, wait, no–it’s actually completely condescending to break up with someone “for their own good,” especially if your fears are based on vague threats you receive in a dream.

That kid whom I’m sure you don’t remember from his bit part in the 15th episode–he’s Mamoru’s kohai/junior–is eavesdropping on Usagi and Mamoru’s conversation, and notices not only that they’re talking about evil plots and kidnappings, but that Luna’s talking.  Yeah, why are they out in public discussing this stuff with the magic cat?  Plus, Luna hits Luna-P, releasing a cloud of brilliant pink smoke.  How they’re not kicked out is beyond me, but apparently Asanuma is the only one who’s disturbed. 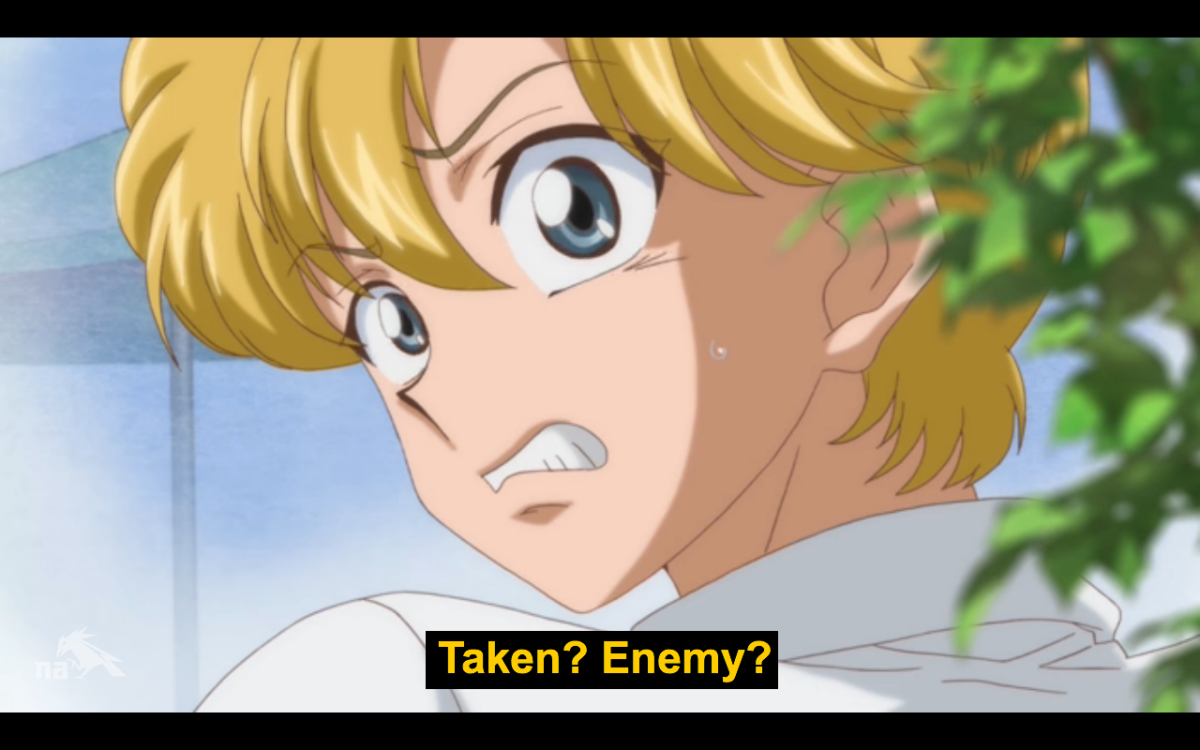 While brooding over his dubious sanity, he runs into Mako, who, like many others on the street, is coughing and developing what she says is a cold.  Chivalrously, he accompanies her home, and they watch a news report on unusual storms and “mysterious circles.”  (In the subtitles they’re called crop circles, but the Japanese voice actress calls them “mysterious circles” in English.  Odd.  Also I love the way you pronounce UFO in Japanese, “you-foe.”)  Mako says something suspicious, and Asanuma freaks out again, assuming that she’s an alien.

I don’t know why you’d choose to get gushy over a guy right when he accuses you of being from outer space, but Mako does.  Everything goes all sparkly, and she as good as tells him that she can’t lie to his pretty face.  She tells him that they’re not aliens, but that they have a destiny to fight evil, and that someday he’ll understand when he has someone important to him.  She then has a very Victorian coughing fit, and he takes her hand and expresses his most ardent desire to protect her.  So she kisses him…on the forehead.  He vows to never reveal her secret, and takes of at a run in the rain, getting wet rather than open the umbrella in his hand.  Ro…mantic? 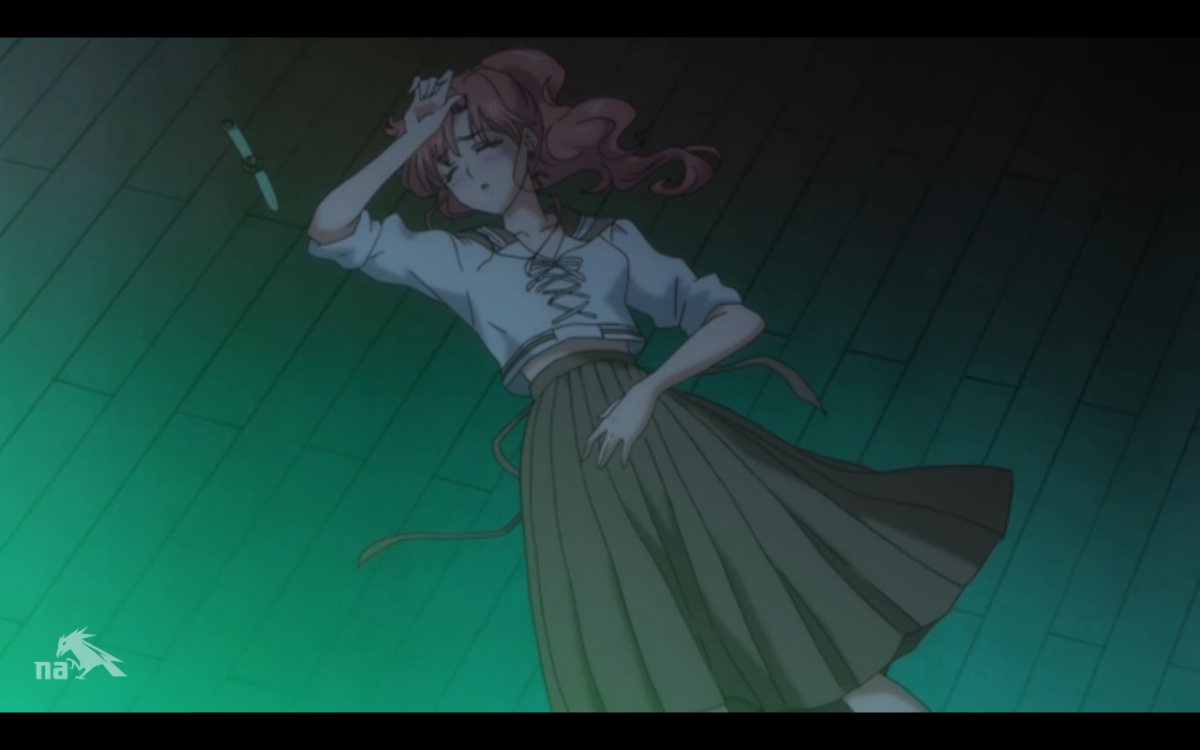 Mako, reflecting on his devotion, has time for one coughing fit and one last glance at the weather, which warns of a fast-approaching typhoon.  Then she faints.  Honest-to-god faints, with her wrist against her brow, a full on Victorian swoon.  I get that this is probably an illness of nefarious origins, but this is Jupiter, the strongest, toughest, hardiest sailor of them all.

Ah, but it is a Dark Moon virus.  So says Petz, hovering beneath the thunderclouds with her small army of droids.  She says that the virus is nearing its peak, and orders the droids to replace all the people in the city afflicted with it.  They disappear to do her bidding, leaving her to contemplate the unearthly forces making her boobs do this: 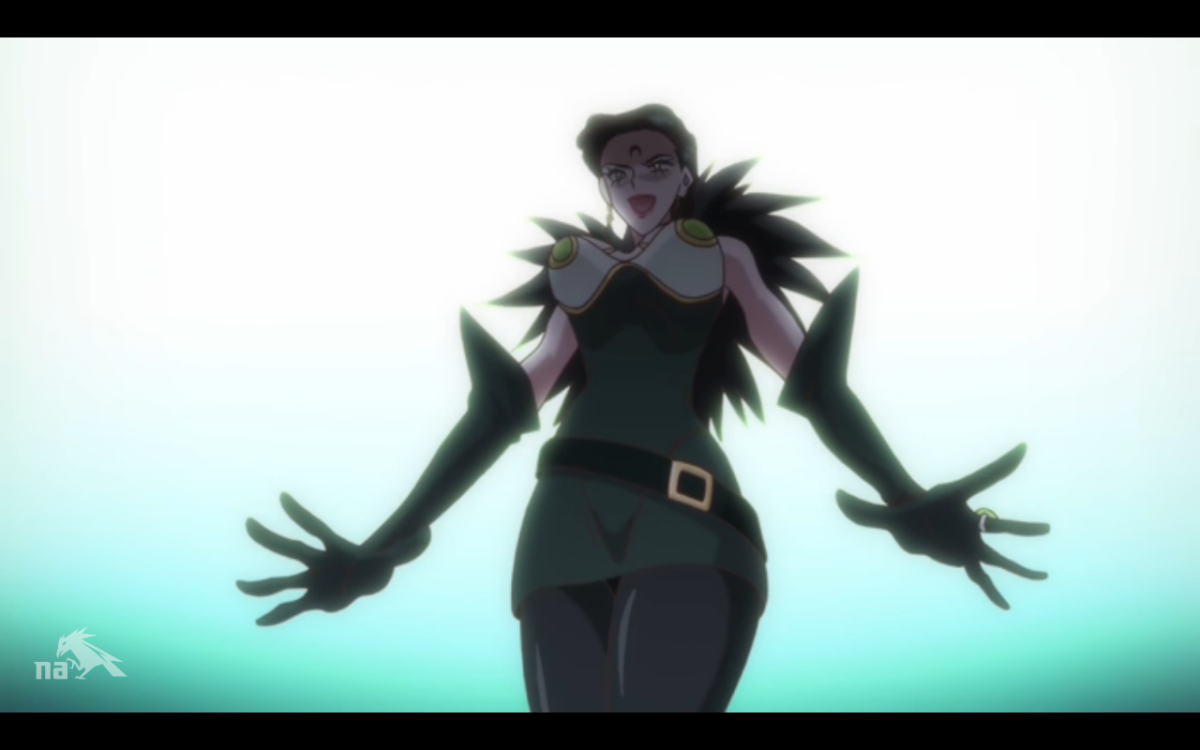 Speaking of unnatural, Jupiter is attacked by her creepy double–again, Japan does puppets like nobody else–and is nearly overpowered.  She relays a message to Usagi through her communicator, but–oh no!  Her door is locked!  Will Jupiter perish? 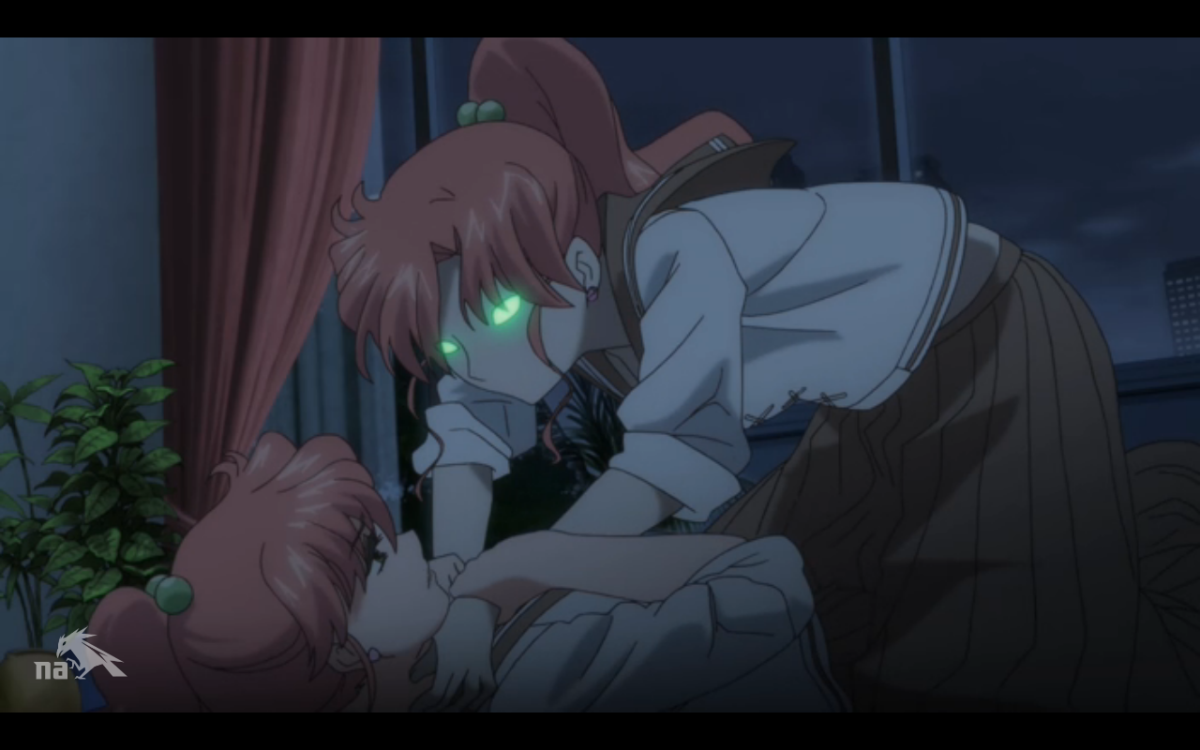 Hah!  Not likely.  In a completely gratifying and relieving sequence, Jupiter goes from barely keeping her double from crushing her throat to hurling her into a table.  Fueled by what I can only assume is pure awesome, she thrashes the droid until, just when Sailor Moon and Venus enter, she lifts the it over her head and hurls it through a window. 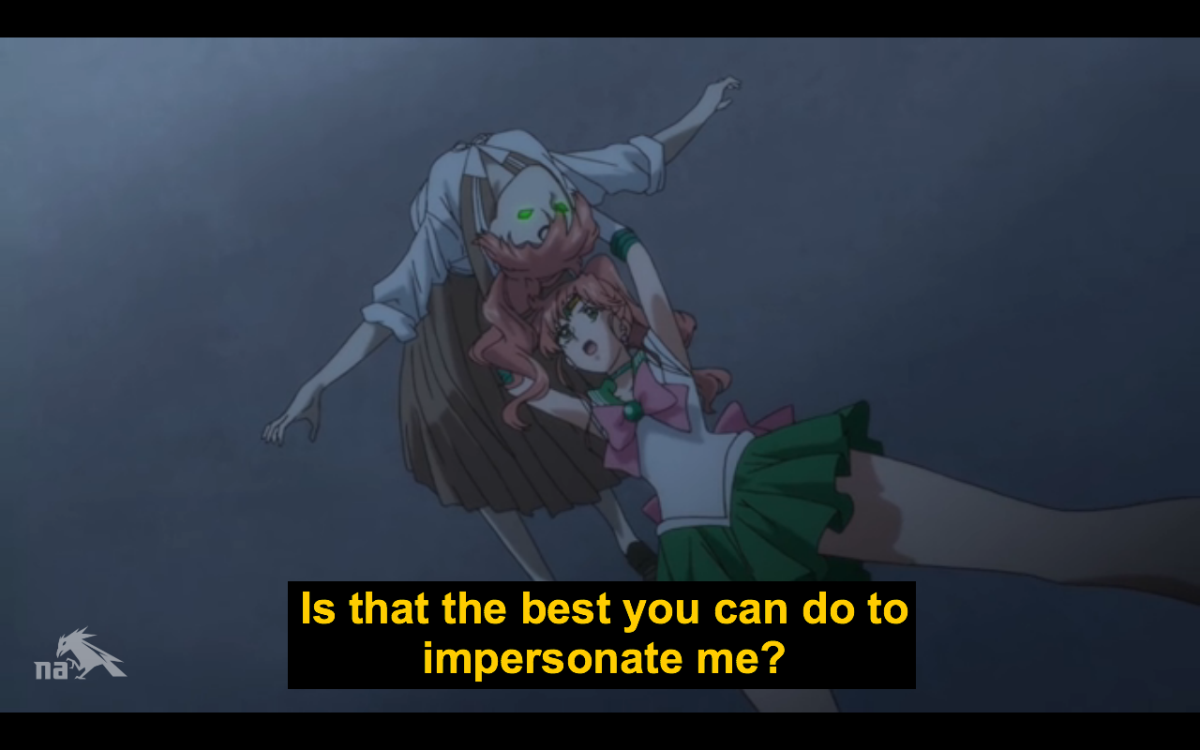 She flies up to engage Petz one-on-one in a really excellent action sequence.  The camera angles especially lend drama to the whole sequence, which is brief but packed with effects.  Jupiter unleashes her flower storm and sparkling wide pressure, and the lightning rod on her tiara extends to mirror the downward cast of Petz’s earrings.  Dozens of droids perish in their battle over the Tokyo skyscrapers. 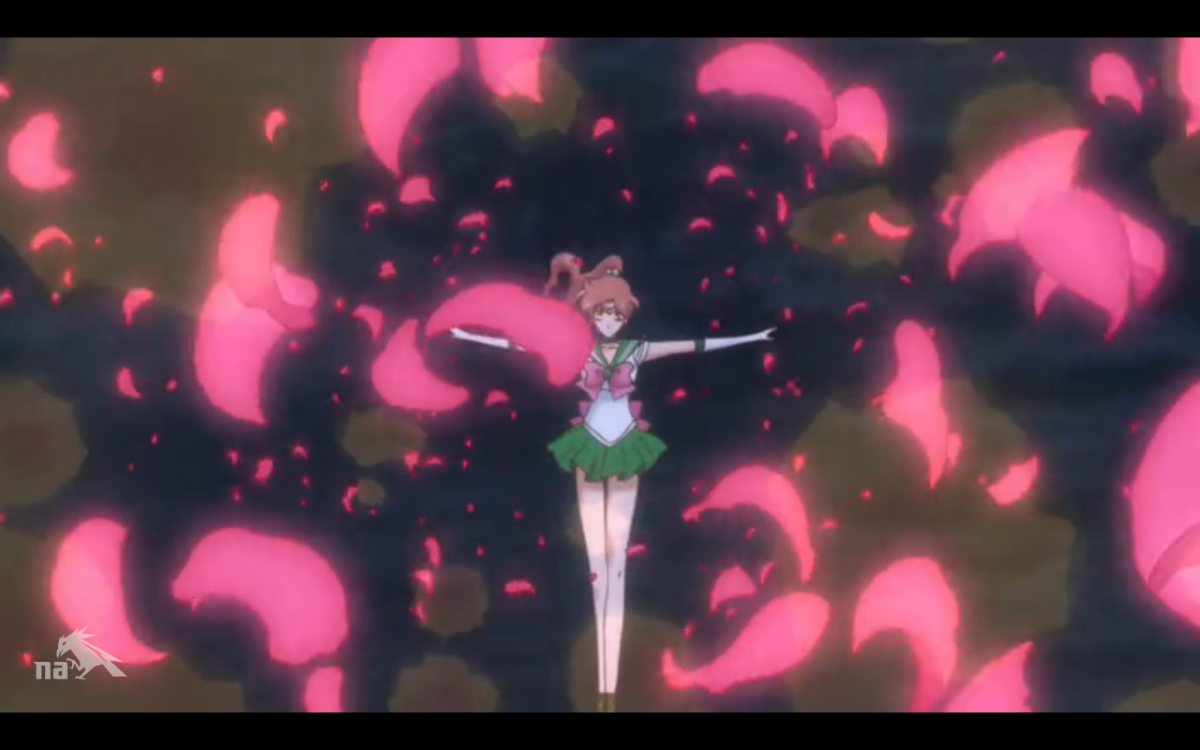 Unfortunately, thanks to her cold, she’s not at full strength, and is eventually overcome.  She thinks of Asanuma in her last free moment, which I hope will help her later, because it sure doesn’t help her now.  She’s imprisoned, Sailor Moon destroys Petz, and Rubeus takes Jupiter, same as the last two times.  I think with all the alien talk, it’s fair to shake my head here and conclude, “so it goes.”