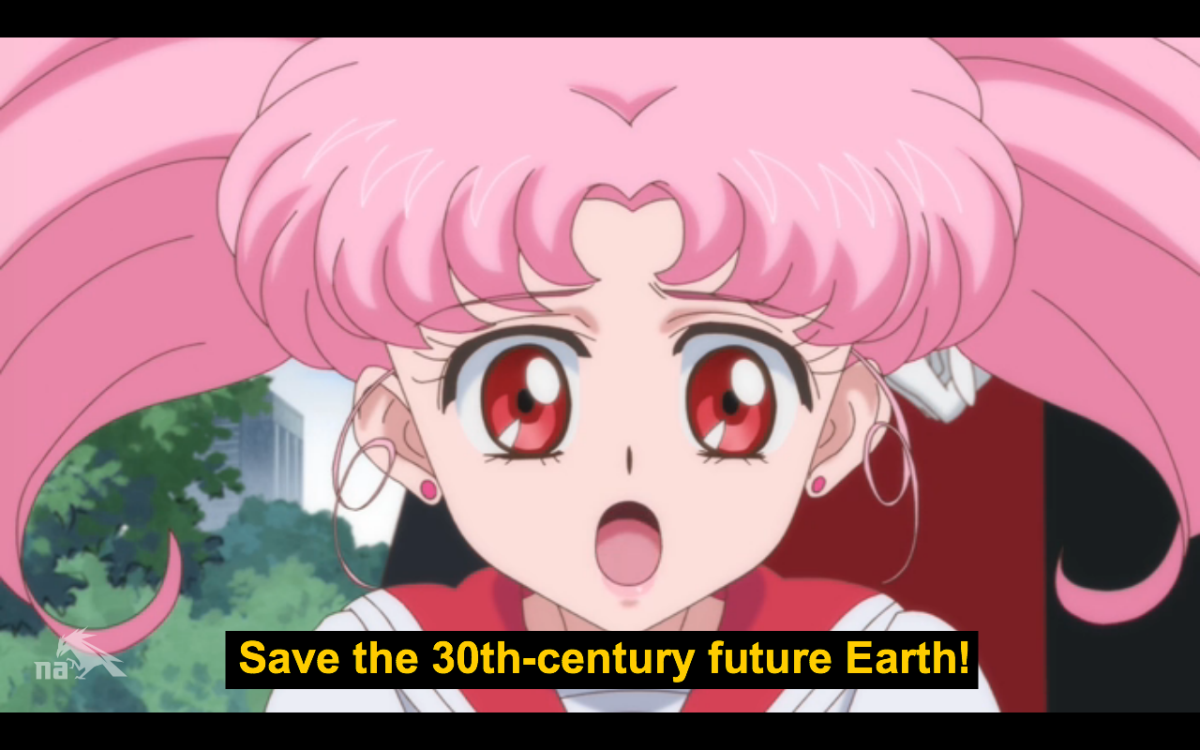 Interestingly, it’s Mamoru who comforts Chibi-Usa, yet again hugging her and shielding her from the Senshi’s questions. He wants to preserve her mental and emotional well-being. There’s some gender reversal going on here, and I do appreciate that the ladies can be aggressive and the man can be maternal (I’d say paternal, but sadly, that really does have a different connotation). Chibi-Usa even wants to retreat to his home rather than Usagi’s when she feels threatened.

This prompts a scandalized “what?!” from Usagi, launching us into an aspect of the original that I always found a bit odd: Usagi’s jealousy of Chibi-Usa’s relationship with Mamoru. The original series made this as silly as it sounds (jealous of a six year old?), but the new one…well…

There was something very unsettling about the pan up Chibi-Usa body while she was posed in Mamoru’s too-large button-down (didn’t he have PJs for her last time?). It wasn’t the kind of goofy shot you’d expect to be played for laughs, with Chibi-Usa in a comically oversized shirt, the hems trailing or tripping her up. It was weirdly sexualized, actually. The bright background, the shimmering chimes as a musical cue, the way her lacy top was shown..I felt really uncomfortable watching this. And when Usagi says that “age has nothing to do with it…she’s still a girl, isn’t she?” I’m just glad Mamoru is appropriately shocked, because this is really very inappropriate. Best case scenario, the animators and directors aren’t very good at portraying childishness.

Which is a shame, because childishness was a great theme to work with. Usagi has always been a little immature, and to have her play off of a younger child left many opportunities for humor. Chibi-Usa’s traumatic experiences also helped create tension with Usagi, since she was both more and less mature. The way that they helped one another grow up made for a very satisfying conclusion. We’ll see if Crystal can manage the same. 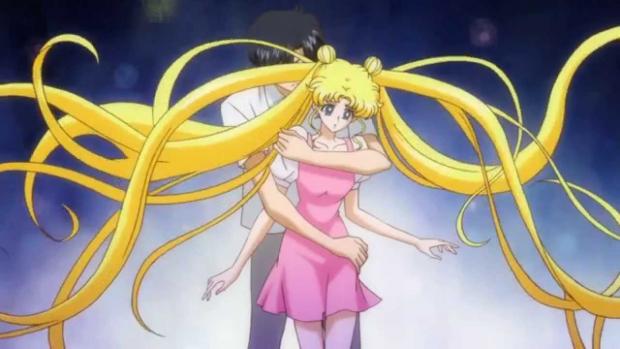 Mamoru and Usagi reaffirm their mutual commitment, hopefully putting all this behind us, while Luna wakes from a dream about the Moon Kingdom. She had been dreaming about closed doors, and the shot is a lovely one, with the shadow of the opened window lattice falling over her. She seems to have some kind of realization that she doesn’t share with the audience, and then we transition right back to Mamoru’s apartment.

Usagi has apparently spent the night, and Mamoru puts a button-down around her shoulders (making Chibi-Usa’s use of one even weirder) as they check up on Chibi-Usa. Chibi-Usa is awake and finally resolved to go back to the 30th century. She uses the Space-Time key, and we get our first glimpse of Sailor Pluto, who warns her in a flashback that time travel is forbidden. Naturally undeterred by this, the Senshi and Tuxedo Mask grab hold of Chibi-Usa’s hand, and she pulls them toward the future. But not long after they enter the Space-Time corridor, they’re torn apart. 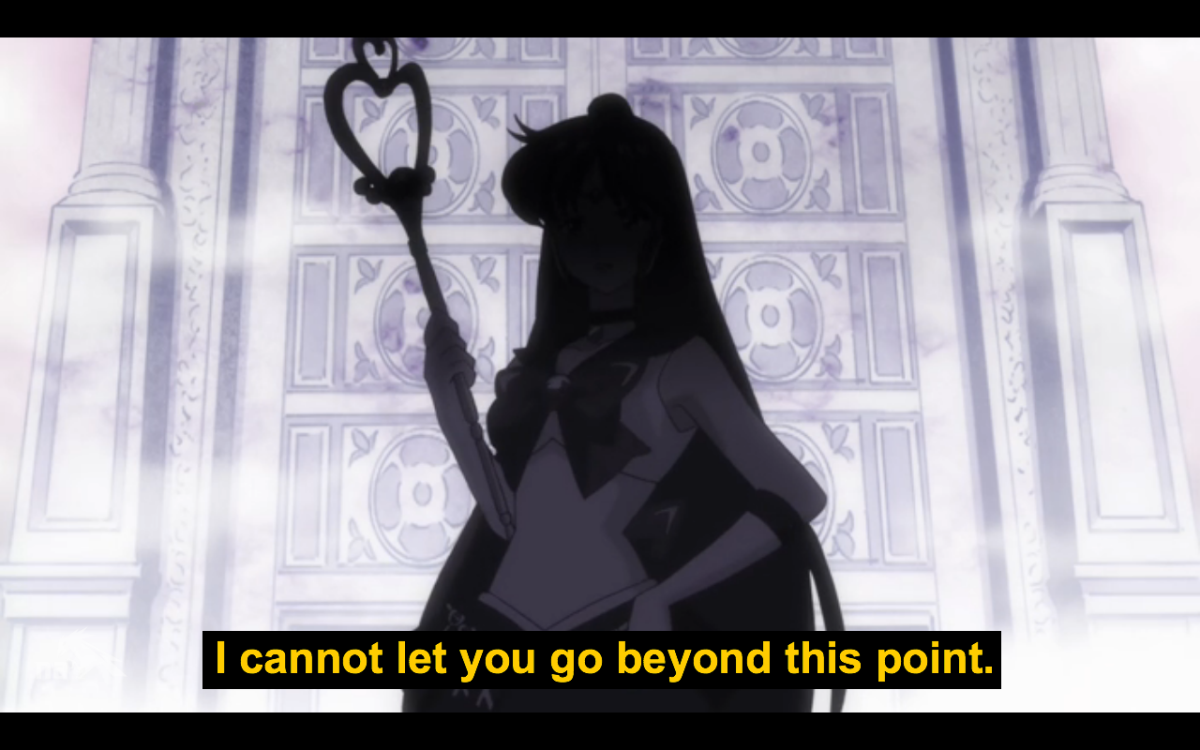 In the place between times, they come across the selfsame door Luna saw in her dream, and with it Sailor Pluto, who brandishes her staff at them. She declares herself the guardian of the underworld, which is an interesting way of conceiving of time. I can imagine that it might feel chthonic to observe all of time, and have your only duty be to prevent anyone from changing it. It certainly might start to seem hopeless, especially if you were there all by yourself. 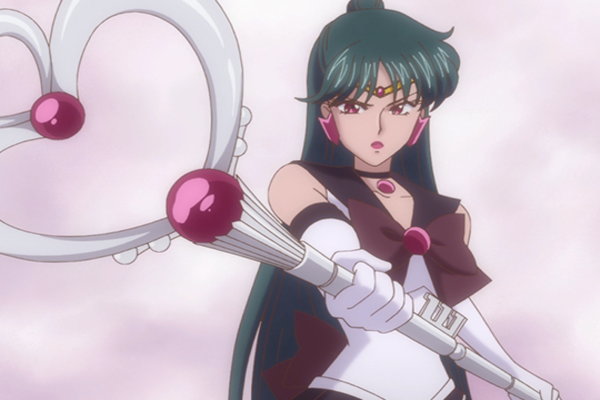 But I digress. Sailor Pluto immediately attacks them, which seems a little hasty, but at least she gets to do something in Crystal. In the original, she was barely a character. Here, she intends to destroy them for infringing upon the rules of Space-Time. (Wouldn’t destroying them mess up their timeline? Or wouldn’t their timeline already be messed up because of time travel already? Augh, you know what, forget it. Time makes my head hurt.)

Fortunately, Chibi-Usa returns from…somewhere…to stop her. She leaps into Sailor Pluto’s arms, which immediately does some hefty narrative work telling us that Sailor Pluto really is an A-OK gal. And when Pluto hugs her back, despite the revelation that Chibi-Usa stole her key, all is made right. This is actually a tidy way of cramming in lots about Sailor Pluto’s character into a very short time, showing us that she’s unflinchingly dedicated but also capable of immense love and loyalty. It also suggests that she is more intimately involved in the Moon Kingdom/Crystal Tokyo/Senshi than in the original, since she seems to know about Chibi-Usa and the royal family. Alas, they maintain that she is tied to the doors, so she doesn’t go with them when she allows the little band through to the 30th century. 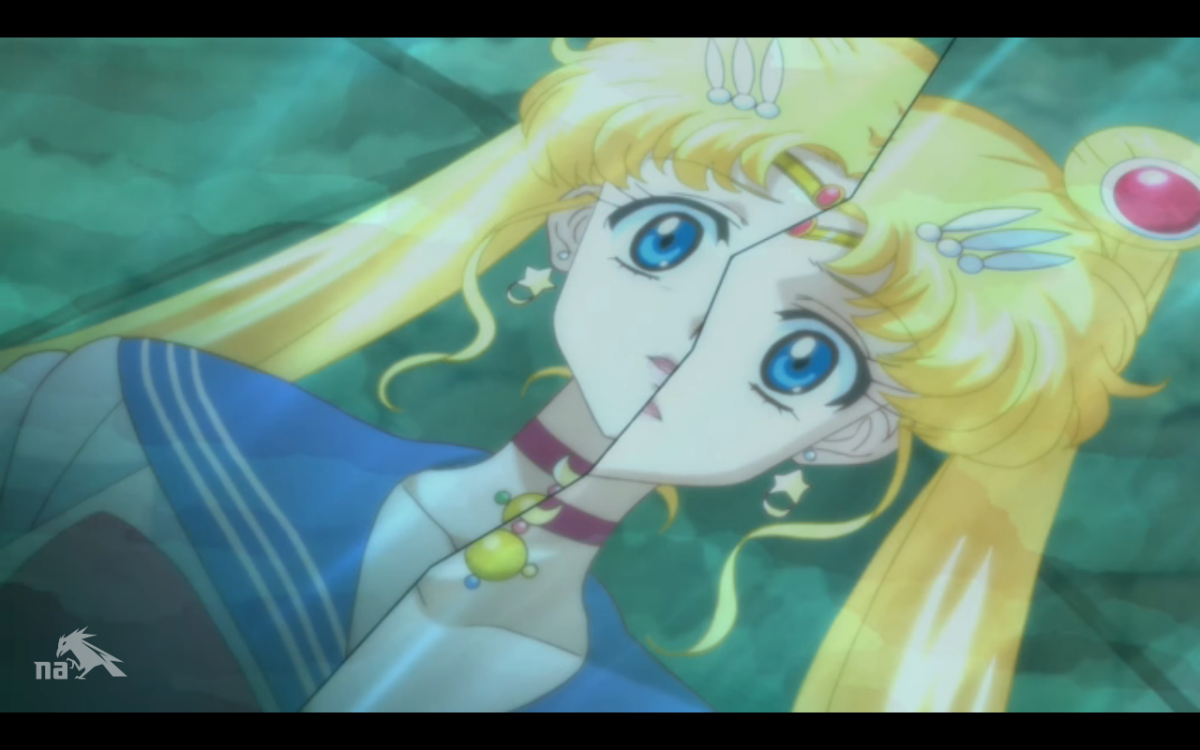 The 30th century is in ruins, but they’re far less austere than in the original. There are bodies scattered around, and the sky is sickly green. Not a bad touch, making things more lurid instead of desolate, but unfortunately, we don’t linger. Chibi-Usa runs straight for the Crystal Palace, where after a nice bit of animation that shows her breaking through some kind of barrier, we encounter the Boule Brothers, Achiral and Chiral. There is some more nice animation in which the heroes are trapped in crystal, fracturing and shattering, but all too soon, a mysterious figure enables their release, and Venus and Tuxedo Mask easily defeat the brothers. The entire sequence feels very rushed, giving us little sense of the villains’ power or personality. Sailor Moon even called them “henchmen.” I can’t decide if Crystal knows how much like a video game it can be sometimes. If they know, I wish they would push that self-awareness further, because merely acknowledging it doesn’t make these fights less perfunctory. 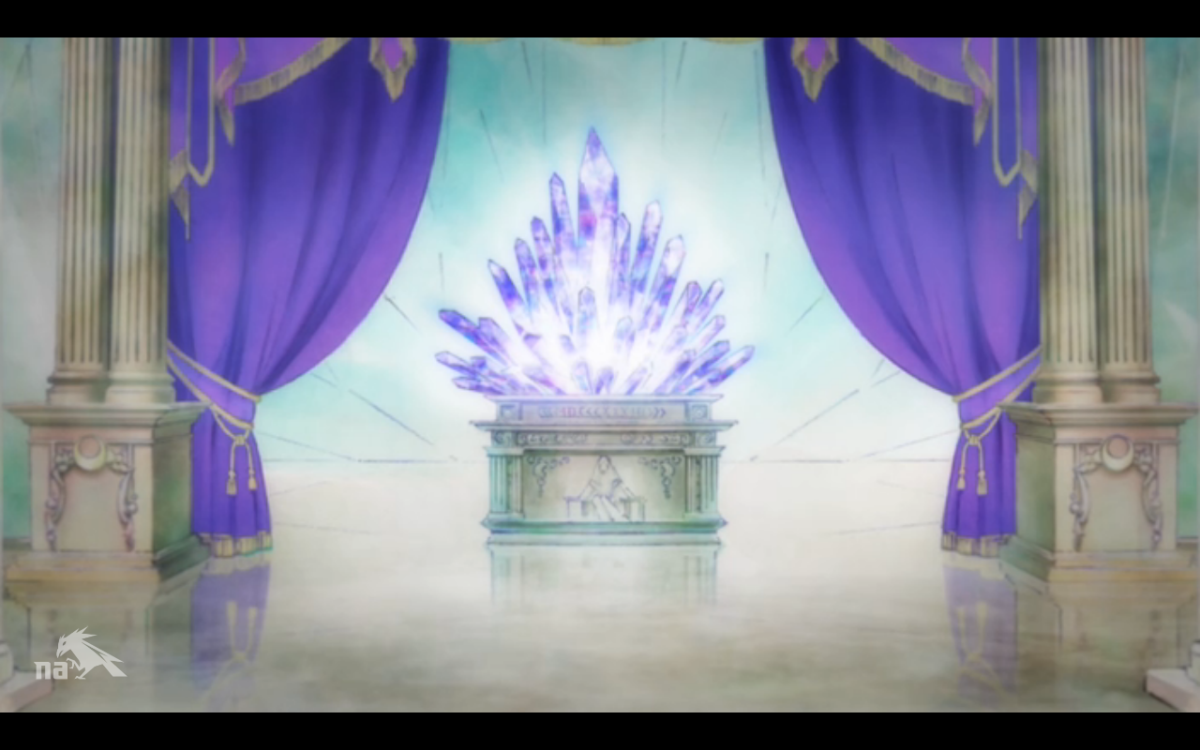 Baddies dispatched, Sailor Moon & co. make their way into the bower of the crystal-trapped Neo Queen Serenity. Oddly, nobody makes any comments about how much she looks like Usagi. Luna and Artemis seem a little more perturbed by the appearance of a grey kitten named Diana, but all the surprise really seems reserved for the final figure, the one who appeared earlier–Tuxedo Mask.

There’s been some good progress this week, but only in the sense that the narrative has progressed. Emotionally, this arc is still a bit flat. I hope that the inevitable rescue of the other Senshi will inject some passion and pathos, and that they won’t stint on the build to the conclusion. The end of this arc in the original is one of my absolute favorite sets of episodes, and worth a watch for comparison.