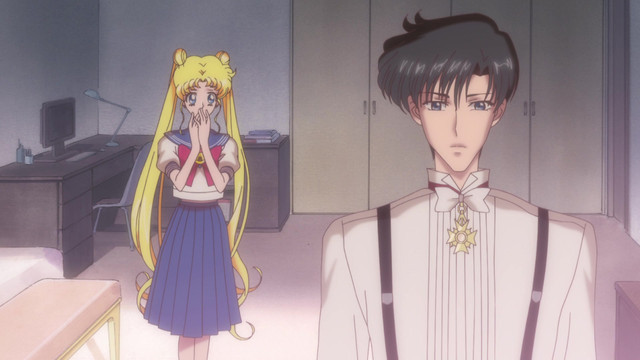 In which we return to the repulsive creep Mamoru Chiba who has Usagi alone in his apartment.

Right off the bat, they have a little chat about Usagi passing out and what she does and doesn’t remember. She seems more concerned with Tuxedo Mask’s identity than the extremely unsettling circumstances in which she finds herself, and I’ve already made clear that I find this date rape-like scenario profoundly inappropriate, so I guess I don’t have to repeat myself. 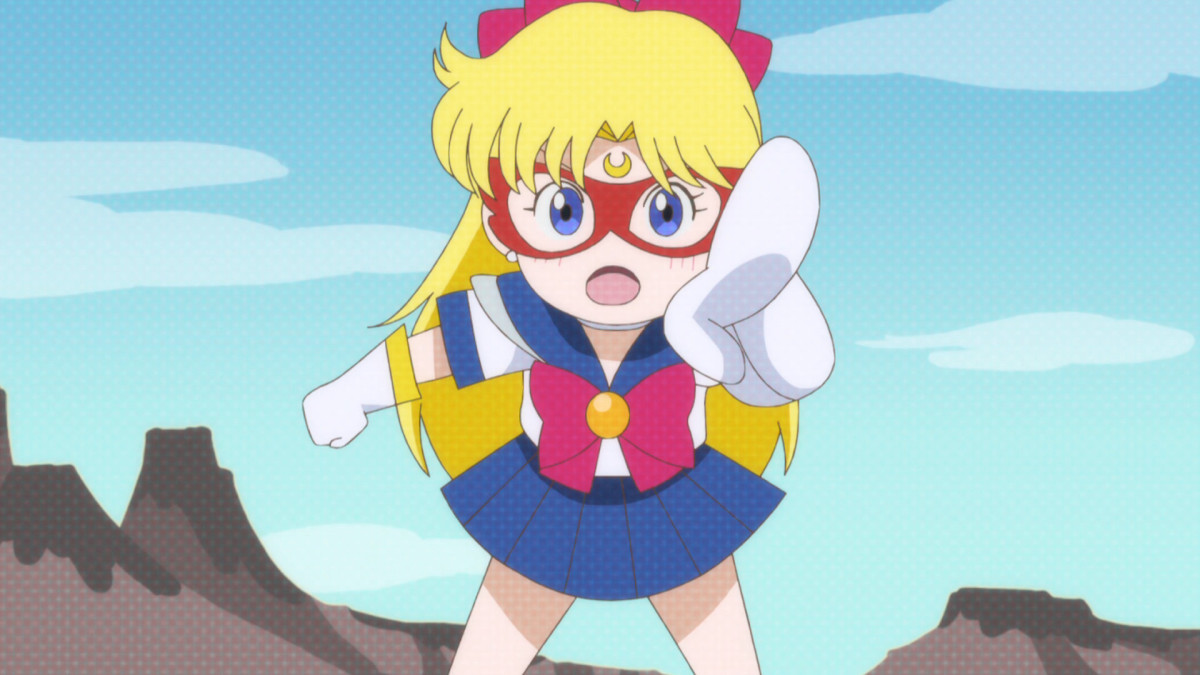 We continue the video game theme when Usagi actually says that she used her “new move,” which is something else worth talking about. Last episode, the Sailor V video game character seemed to talk to and encourage Usagi, and the girls have been bonding over playing a video game. Video games are supposed to be so internalized that we recognize all this talk about “new moves” and “new items,” and I’m very happy about it. We’ve now reached a point at which many people–yes, including women and girls–have grown up with video games as an integral part of their childhoods. Why not call on that rich lexicon to deepen the story and provide some metaphors? I only wish more shows would do this. 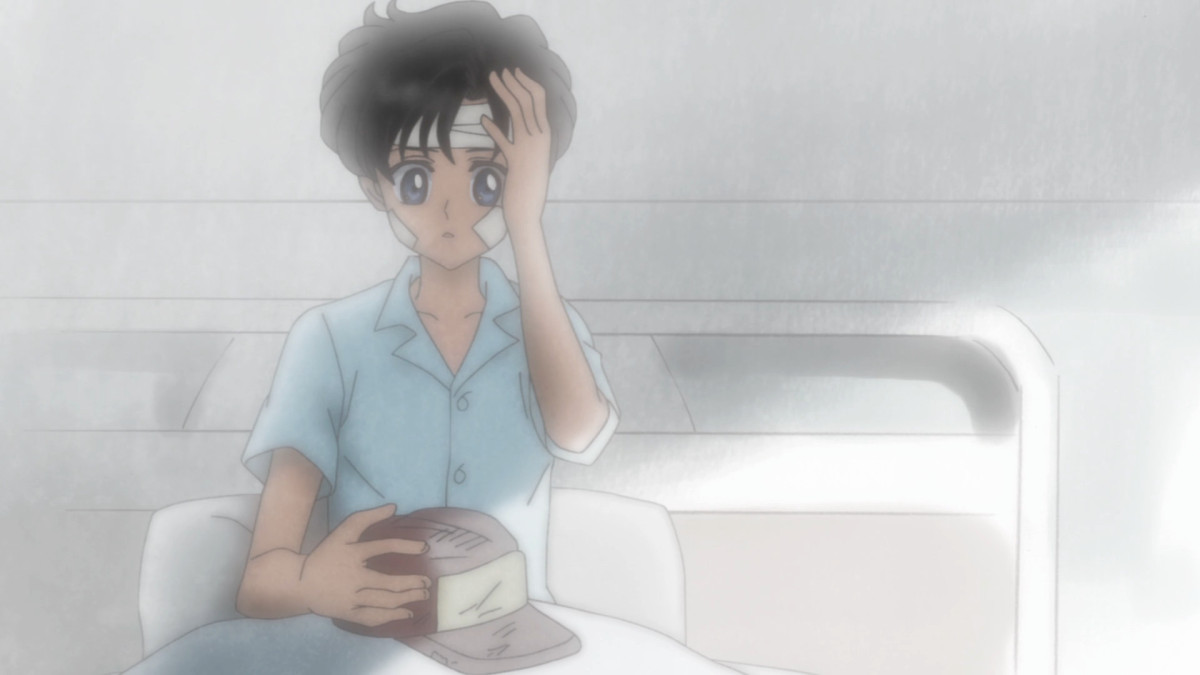 Mamoru’s backstory is yada yada yada, amnesiac orphan, blah blah. That’s another trope I’m sick of, especially in anime and dramas. Amnesia is not that common (this is anecdotal, but my doctor friend encountered amnesia only once, in a schizoid patient off his meds, and he was not cool and mysterious. He came into the ER covered in his own feces and swore at everyone). It’s also an extremely lazy form of storytelling, since it doesn’t force you to develop secondary characters or provide any motivation other than “get my memory back,” and the person’s personality is a blank. I get that the original was decades ago when the trope wasn’t so firmly established, but I sort of wish they had done something differently this time around. But I get it, everyone has “amnesia” to some degree about their shared past lives, so it remains important. I’ll let it go.

They then proceed to stare at each other for way too long, which I’m of two minds about. On the one hand, it’s an established romantic fantasy, especially for younger girls, who are generally more moved by moments of intense, unspoken longing and feelings that are difficult to express. But seeing this from an adult perspective, I’m mostly bored by it. in retrospect, for me at least, those fantasies were appealing because I didn’t know how to express my feelings to my crushes, and it was convenient to imagine scenarios in which no words were necessary. Now, I am more moved by shared interests than shared looks.

This is a show (ostensibly) aimed at young girls, though, so again I can’t be too harsh. Finally, Usagi breaks off staring. When she turns to go, he stops her (creepy), but fortunately just gives her her bag and lets her go back to Luna.

Luna is apparently not frantic about Usagi’s whereabouts, and is communicating with a mysterious girl (unless you’ve seen the original, in which case you know exactly who she is) who says they have no time. 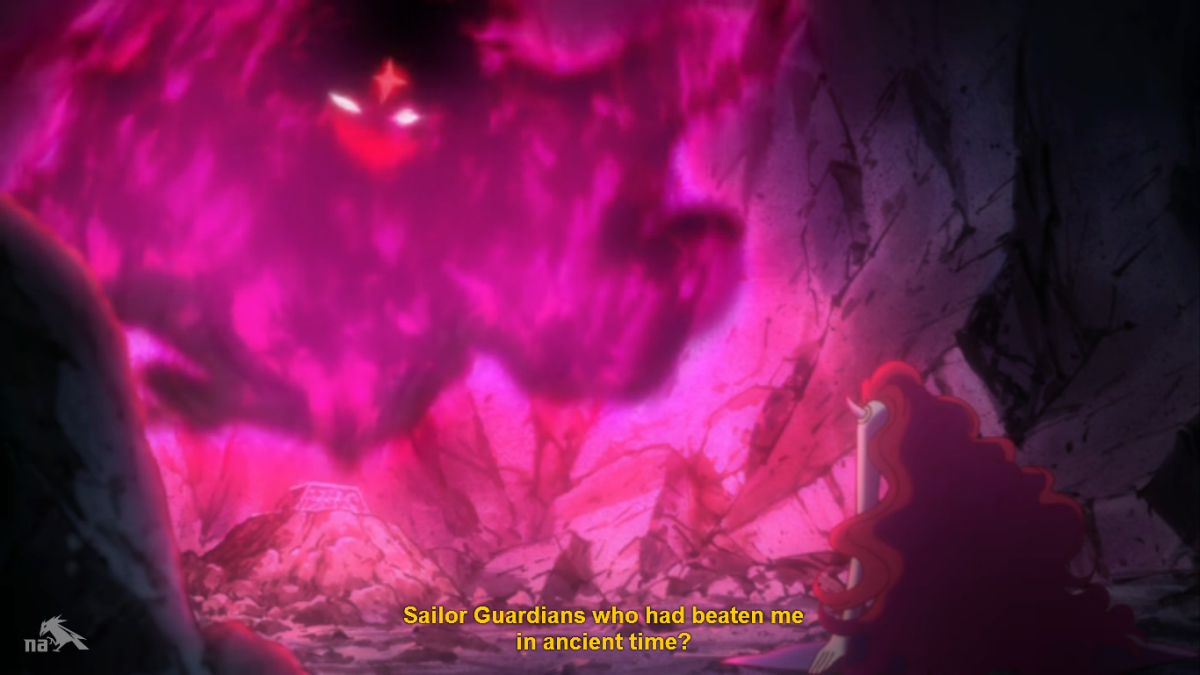 And she’s right. We see Queen Beryl taking energy to Queen Metalia. It starts off well, with a tiny ball of energy sent up into a darkly glowing, ever-shifting haze of darkness, like smoke from an unholy sacrifice. The puny human energy and even Queen Beryl are truly in this evil’s shadow. But then a face appears, and the menace disintegrates. It’s no longer ambiguous. It actually just looks like the pokemon Haunter. Sigh. The original had Metalia looking like Cthulhu had melted in some infernal conflagration. Way better. 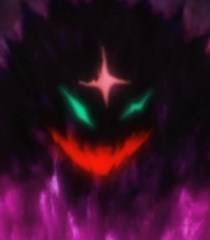 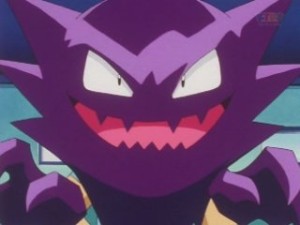 Beryl and Metalia chat about the Senshi of olden times, as Lunda did when she mentioned reincarnation. As we are now halfway through Crystal, I find it helpful that they’re continuing to foreground the reincarnation stuff, as it’s all a bit ambiguous and sudden in the original. Beryl then recalls “that day” at D-Point, and what the hell is with all the D? Princess D, Kingdom of D, D-Point—please stop inviting dick jokes and pick another letter.

Sorry, back to the point. “That day” was when Beryl released Metalia, who was imprisoned for reasons and by persons unknown. Ooh, new backstory! Also, Beryl is scheming to keep the Silver Crystal for herself, a nefarious, backstabbing plot of which I approve heartily.   Nice to see villains being villains. 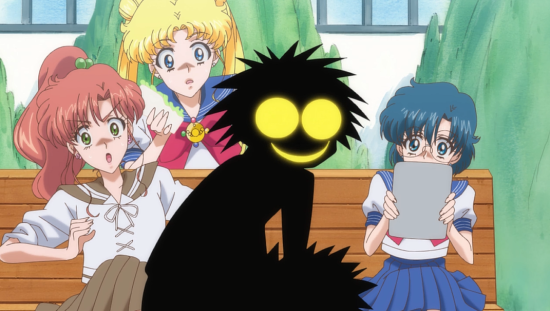 And Umino being Umino.

She summons Zoisite to get the Silver Crystal, and he launches himself into a plot involving…a video rental store. This is about as topical as the CD-ROMs and the nightly news were. And in the next scene Ami’s using an iPad! Has the Dark Kingdom never heard of the internet? Ami’s doing research on Sailor V, but Luna puts her off it, and they soon have more to worry about. Umino and Naru are acting strangely, and it’s all connected to the “Dark” video store.

The Senshi are savvier in Crystal than in the original, in which most plots revolved around them coincidentally being involved with the place or thing the Dark Kingdom is enchanting. This time, Rei notices something strange, as do the rest, and they investigate rather than fall into things. Mostly. The entire town (“town” being Tokyo, or at least Juban) starts acting like zombies, searching for Sailor Moon.

To her credit, Usagi is brave enough to transform despite everyone being after her, and heals a bunch of people all on her own, despite the way their freakishly long arms reach for her all at once (it’s a fantastically creepy moment). She’s soon set upon by Zoisite, though. 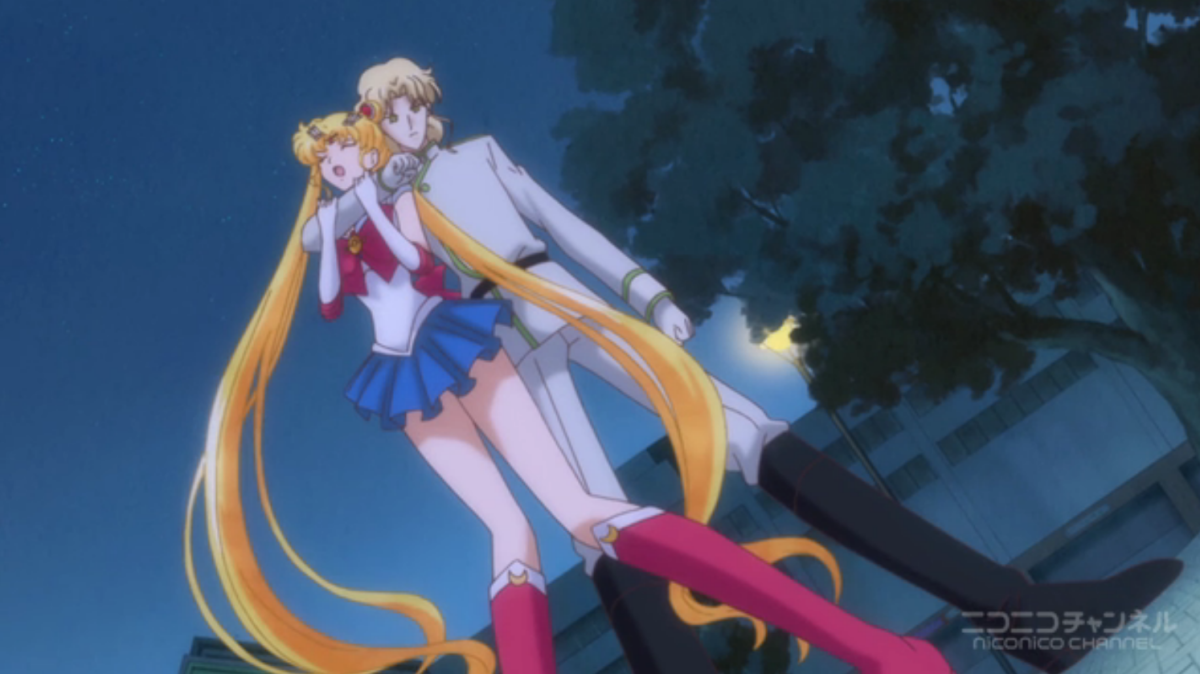 The rest of the Senshi come to the rescue, and hurl their power at him. And at Sailor Moon, I might add, whom he’s holding in a chokehold. Do they really think giant blasts of fire and lightning aren’t going to also hit Sailor Moon? Well, whatever, they can’t penetrate his shield, and he knocks them all out. Things are looking grim. 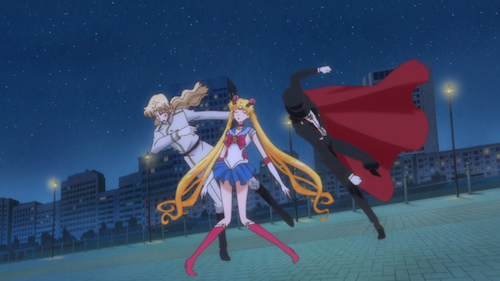 Then, out of nowhere, Tuxedo Mask arrives, and hauls off and punches Zoisite in the face. I’m impressed. He did something useful. I’m sad, however, that Zoisite wastes no time with his previously trademark vanity over his face being blemished, and wails on Tuxedo Mask with his power. The Four Kings really lack personality in Crystal, but they do have strength.

They somehow manage to fit a conversation in about how Mamoru wants the Silver Crystal, but how he now wants Usako more. Zoisite therefore decides to kill Sailor Moon first. He’s about to, uh, drop a giant zoisite crystal on her head (poetic? maybe?), and both she and Tuxedo Mask yell about that but otherwise don’t do much. No, it’s another who steps in to save Sailor Moon. It’s…Sailor V! 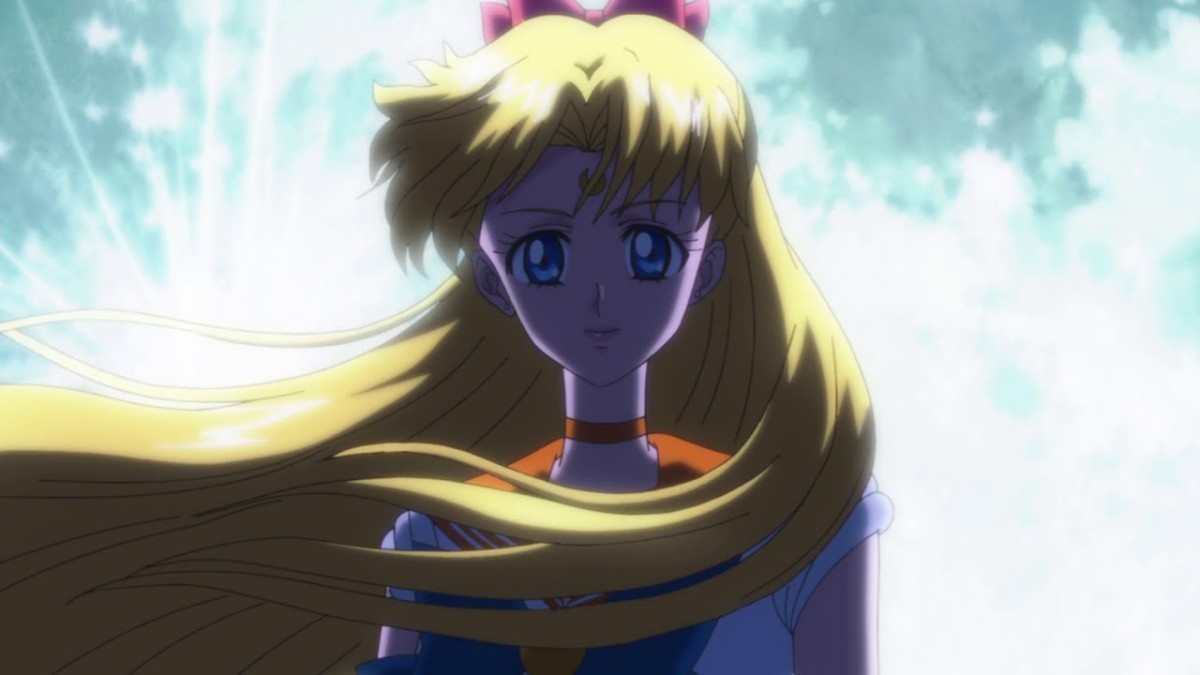 Sailor V breaks the giant crystal, and Mamoru punches Zoisite again. (They’ve apparently dropped the throwing-roses thing in favor of Mamoru being unpowered, just like Usagi, which makes narrative sense but loses symbolic points.) He leaves, and we’re left watching Sailor V stand in all her glory above them all.