Last week, a Daimon was defeated, Sailors Uranus and Neptune issued ominous warnings but otherwise did zilch, and Hotaru healed Chibi-Usa by the laying on of hand. Today, we get the reaction. Which is shock and awe, obviously, because eight year old consumptives (it’s not clear what Hotaru’s malady is so I’m going to refer to it as consumption, which if you think about it is probably not that far off) don’t usually glow and stitch you up. Hotaru’s own response is to be embarrassed, because she thinks it’s “creepy.” 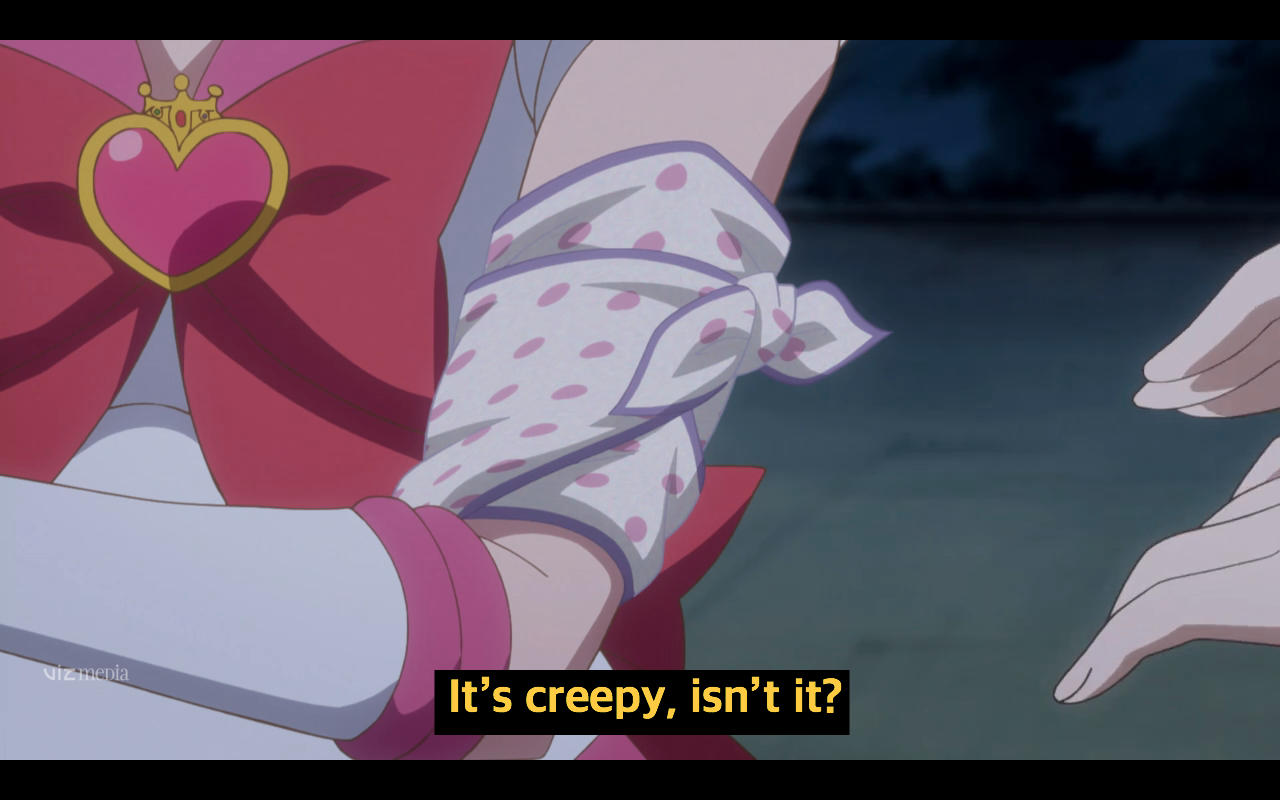 My first reaction on learning that a girl could heal wounds with a touch would not be “creepy!” Maybe “how has the government not carted you off to experiment on you?” or “why are you not leading a cult?” but definitely not “creepy.” Although it is creepy that she just admits she has this power in front of everyone. Isn’t that a little…dangerous? I guess the Sailor Guardians who have been protecting Tokyo for two years aren’t really a threat. I kind of wish we had more of a sense of the public reaction to them—are they superheroes? They certainly protect their identities, all of them except Chibi-Usa, who kind of lets slip who and what she is right off the bat.

But secrets are mutually assured destruction, so I guess they all agree to let the matter rest. The Inners go back to base and debate her briefly, Chibi-Usa blushing all the while. Chibi-Usa has certainly inherited her mother’s tendency to crush on hot young ladies at the drop of a hat. (See what I did there?) 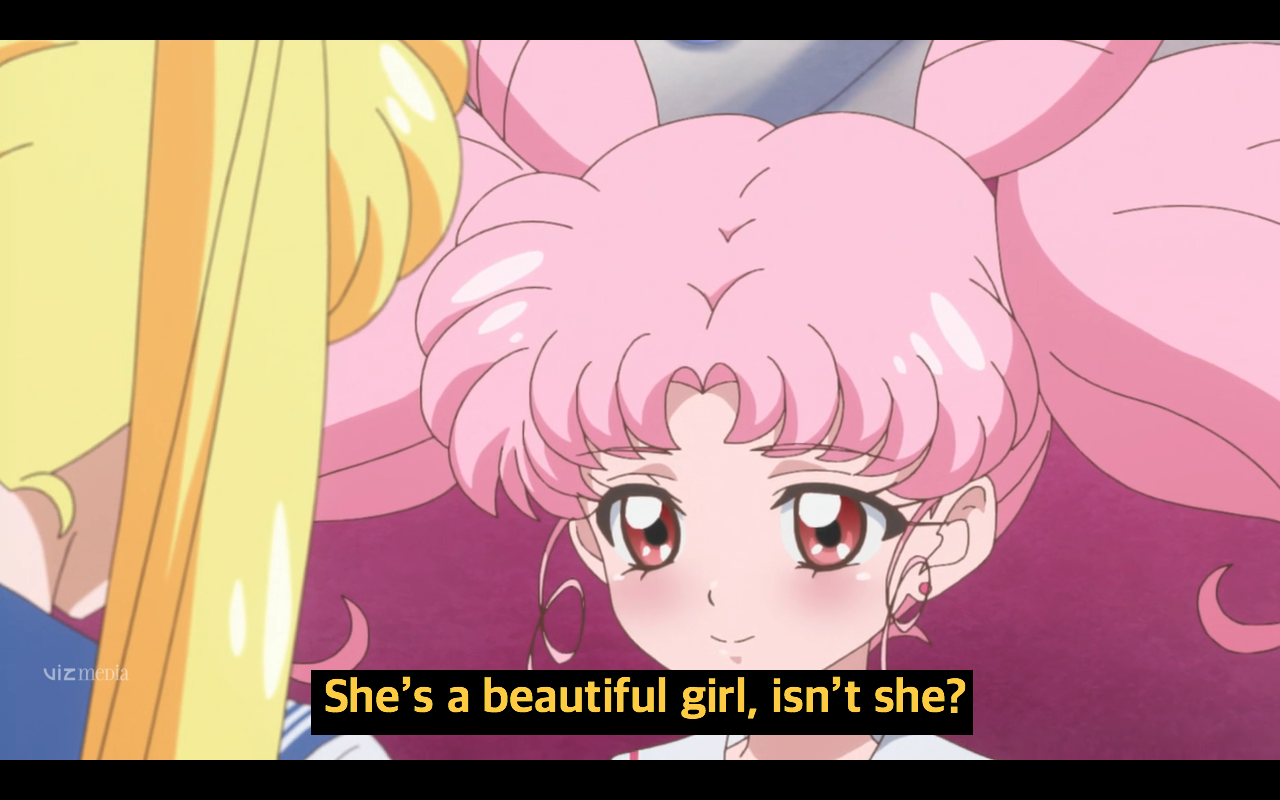 They then move on to the two mysterious new guardians/enemies. Inner Senshi certainly don’t think very highly of the Outers, suspecting them of being enemies in clever disguises. Those disguises must be really good because somehow, despite identical builds and hair, the Senshi aren’t able to link them to the vaguely threatening Hotaru and Michiru. A+ detectives we’ve got here. 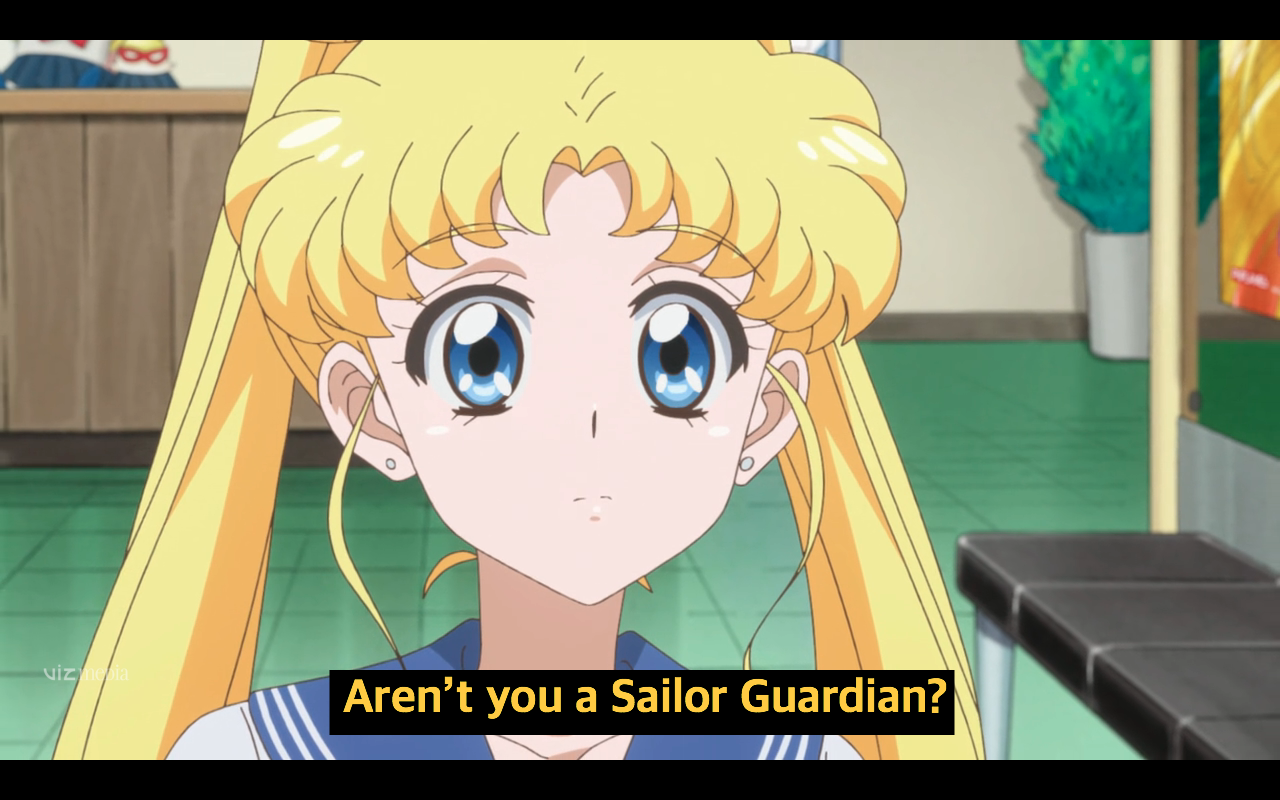 Meanwhile in Mugen Academy, Hotaru gets upset with Kaolinite, whom she suspects of trying to get with her dad (not incorrectly). Kaolinite and Professor Tomoe basically shrug at her distress, both physical and emotional, and let her run off. Professor Tomoe does at least go to find her in bed later, and gives her a mysterious crystal to stop her from shivering with pain. The crystal is, of course, completely evil and probably a link to Pharaoh 90, but I for one am glad that Hotaru is not in agony or fever-sweating anymore.

Oh, right, Taioron crystal, which, sure. Let’s get a focus for all this evil. Yes, it’s kind of the same as the black crystals from last season, and the crystal-named henchmen of Queen Beryl, but they’ve clearly got something that works.

Kaolinite uses her crystal to do a bit of divination, and sees three lights with telltale colors appear, turquoise, yellow, and violet. Something whispers to her about three talismans before the lights shine too brightly and physically repel her. Powerful stuff. (Also, three lights? Really? Never mind that there are four Outer Senshi—I guess someone really wanted to reference Super S and the Starlights. Does this mean we are or aren’t getting a fourth season?) 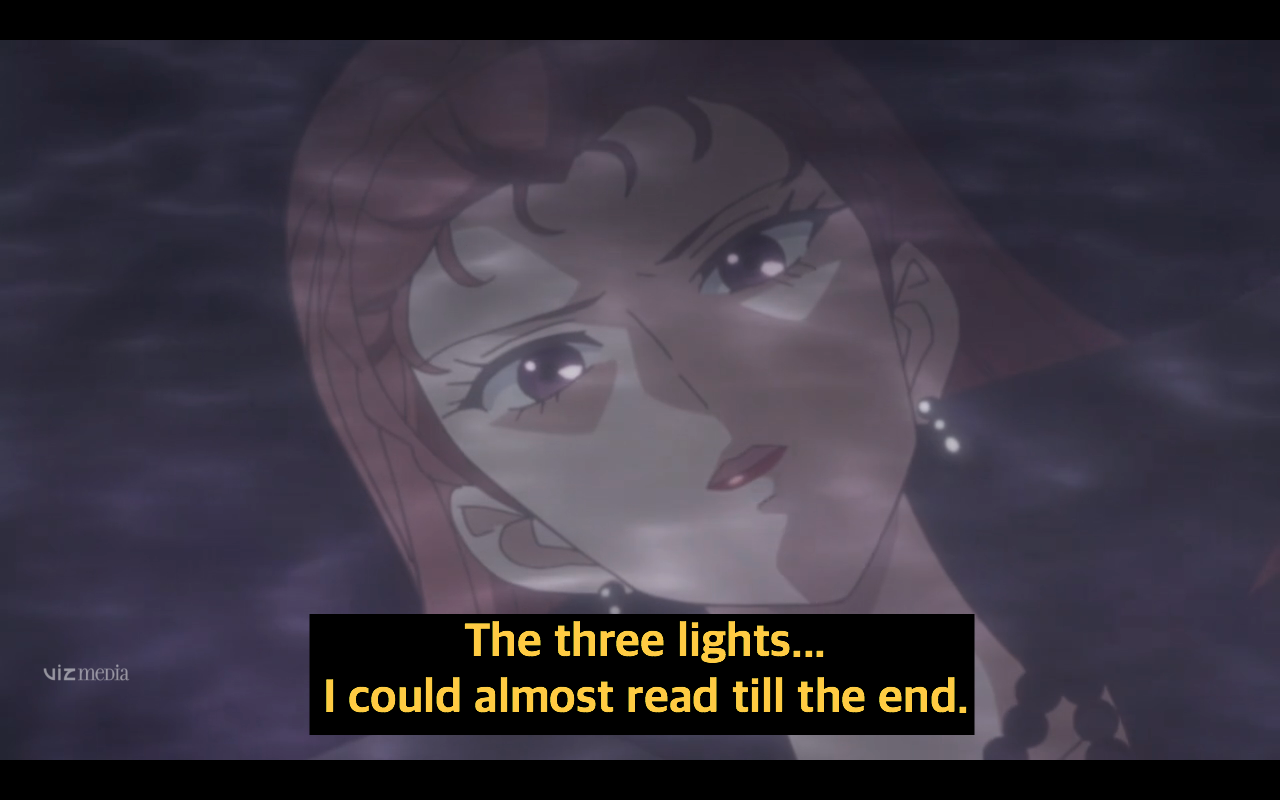 There’s no way this is an accident. Right?

Mamoru also has premonitions about three talismans, as does Michiru, as does Rei. Something’s awakening! Everyone needs to collect talismans! And levels! This is an anime by way of a video game!

More usefully, Usagi correctly deduces the connection between the mysterious new Sailor Senshi and Haruka and Michiru. This is only sort of useful because she immediately doubts herself, but I gotta give credit to the writers, this is exactly the kind of high WIS, low INT kind of intuitive leap that Usagi should be good at. Regardless of her level of conviction, the other Senshi do think Haruka’s bad news, and try to shoo him (her)* off. All except Rei, who is absent.

It turns out that Rei is off purifying herself in the mountains somewhere, even though Mako wants to plan her a party. What crazy hijinks! Not that I don’t appreciate their attempt at small talk and the friendly humor that made the original so endearing, but they haven’t quite nailed “humor” or “friendship” here. It’s all al little awkward. Still, I’m glad they have a reasonable excuse to tromp up the mountain to interrupt a sacred retreat. With cake! And the retreat is only mostly sacred. It’s also an excuse to spy on Mugen’s retreat for new students and pick up their vibes.

Rei has a vision about the talismans, and wonders “is that a keyword to bring destruction on our enemies?” Yes, she actually use the English “keyword.” I do not think that means what you think it means! She also…doesn’t know what the word destruction means? 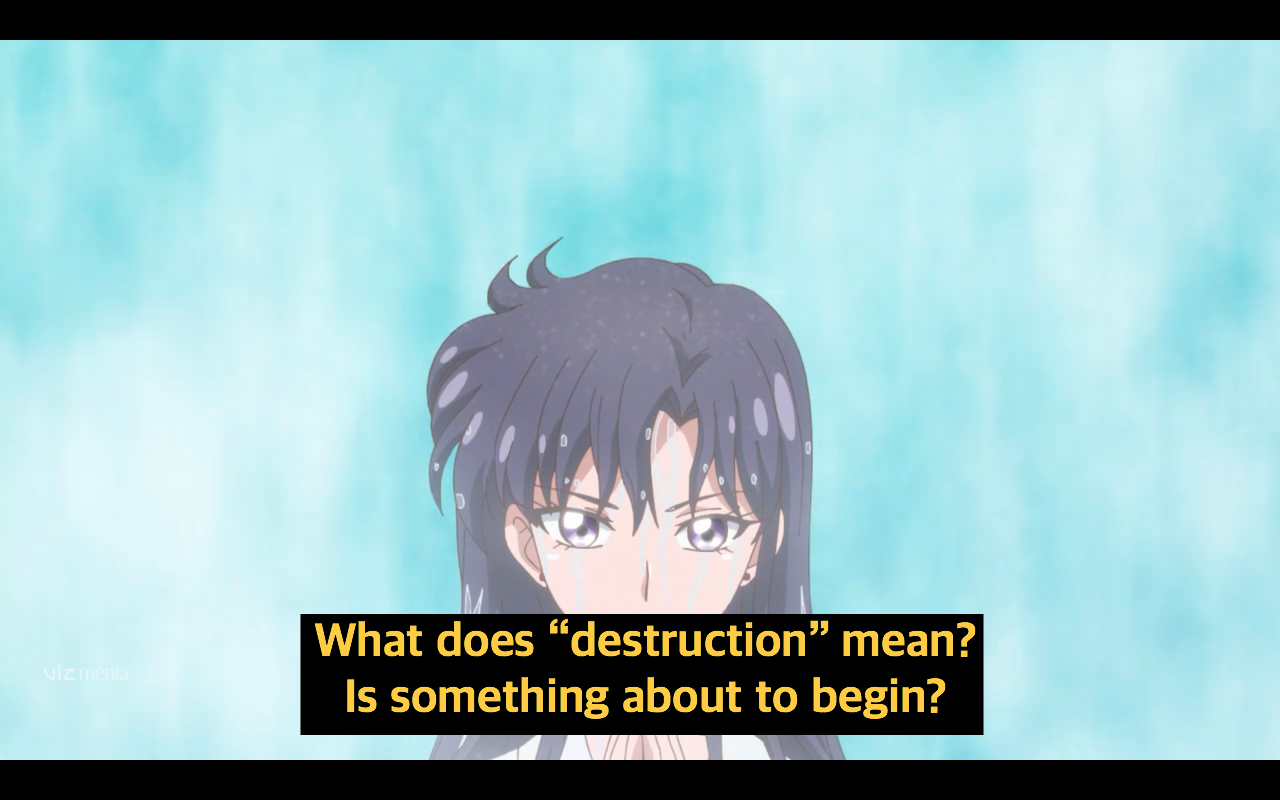 Fortunately, Rei is cannier than her vocabulary suggests, and she’s keeping an eye on a training camp for Mugen students. Including Haruka, who’s apparently awesome at judo in addition to being awesome at racing cars, piloting choppers, and running. Haruka defeats Jupiter in a match and while this establishes that the Outers are probably more powerful than the Inners, I’m not sure what else this interlude does.

We finally get to the heart of matters that night. Mugen, looking extremely like a cult, has a giant nighttime bonfire and reads out the school rules, which are all about doing well in school, achieving their academic potential, and becoming unholy vessels for a power from beyond the stars. Pretty standard stuff. But when’s the booze-related hazing? 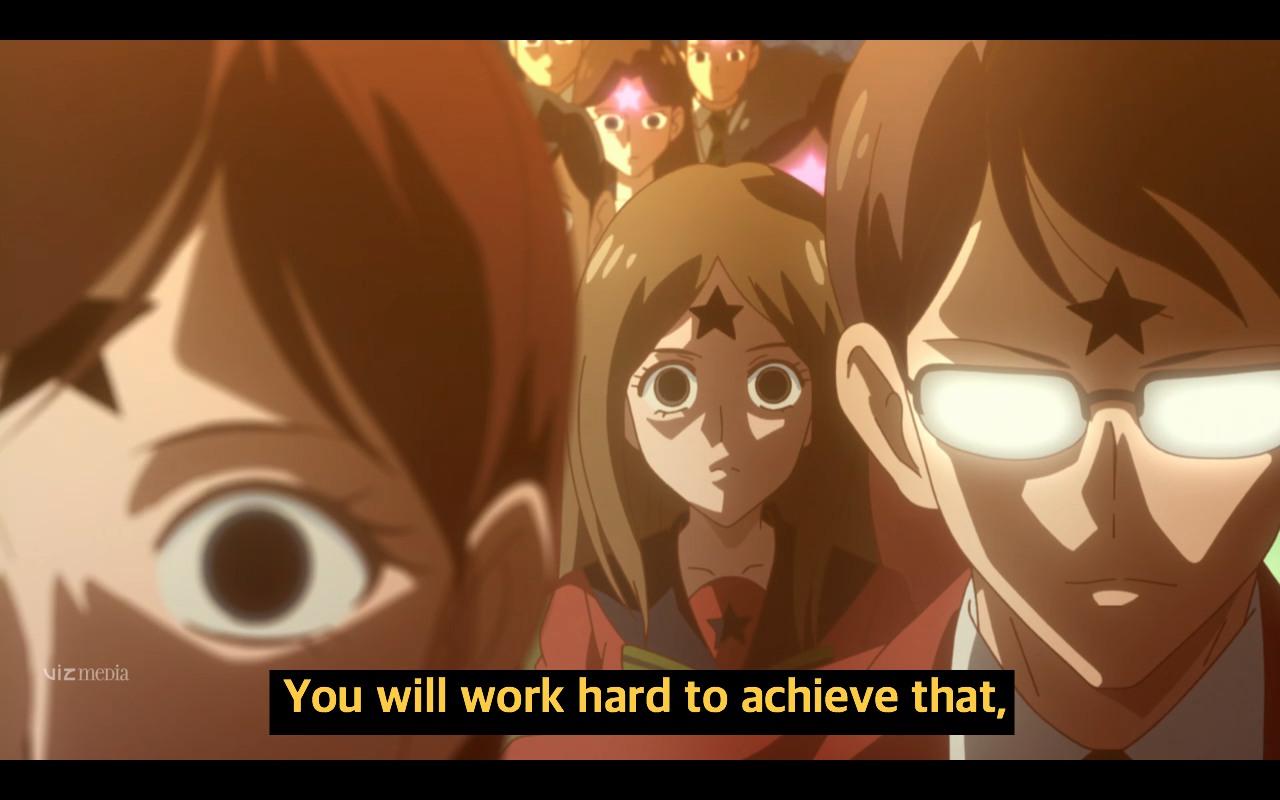 Mars and Jupiter, disappointed by the lack of cheap beer (and presence of pure evil or whatever), disrupt the gathering. Eudial goes on about being level 78 and wanting to raise her level, which if there’s a cult that will let me (a) treat life like a video game and (b) shoot fireballs, I am 100% in. Sorry, family and friends! It was nice knowing you. 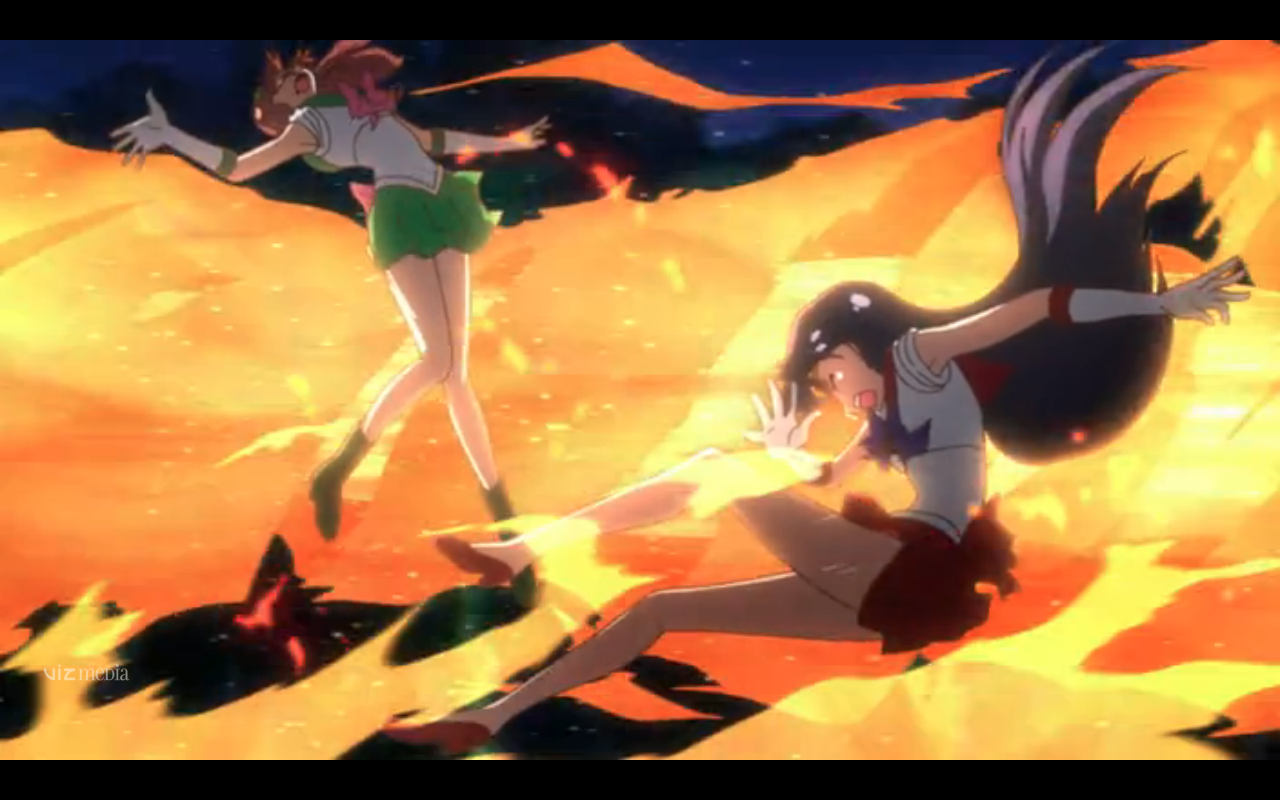 Another well-animated battle ensues in which Mercury and Jupiter get their asses handed to them. In their defense, fighting fire with fire (and lightning) is a terrible idea. Fortunately, the genius Ami comes and uses water. Yes, IQ of 300, thank you Ami-chan. She gives the assist to Usagi, who unleases her Moon Spiral Heart Attack and hits Eudial right in the points. 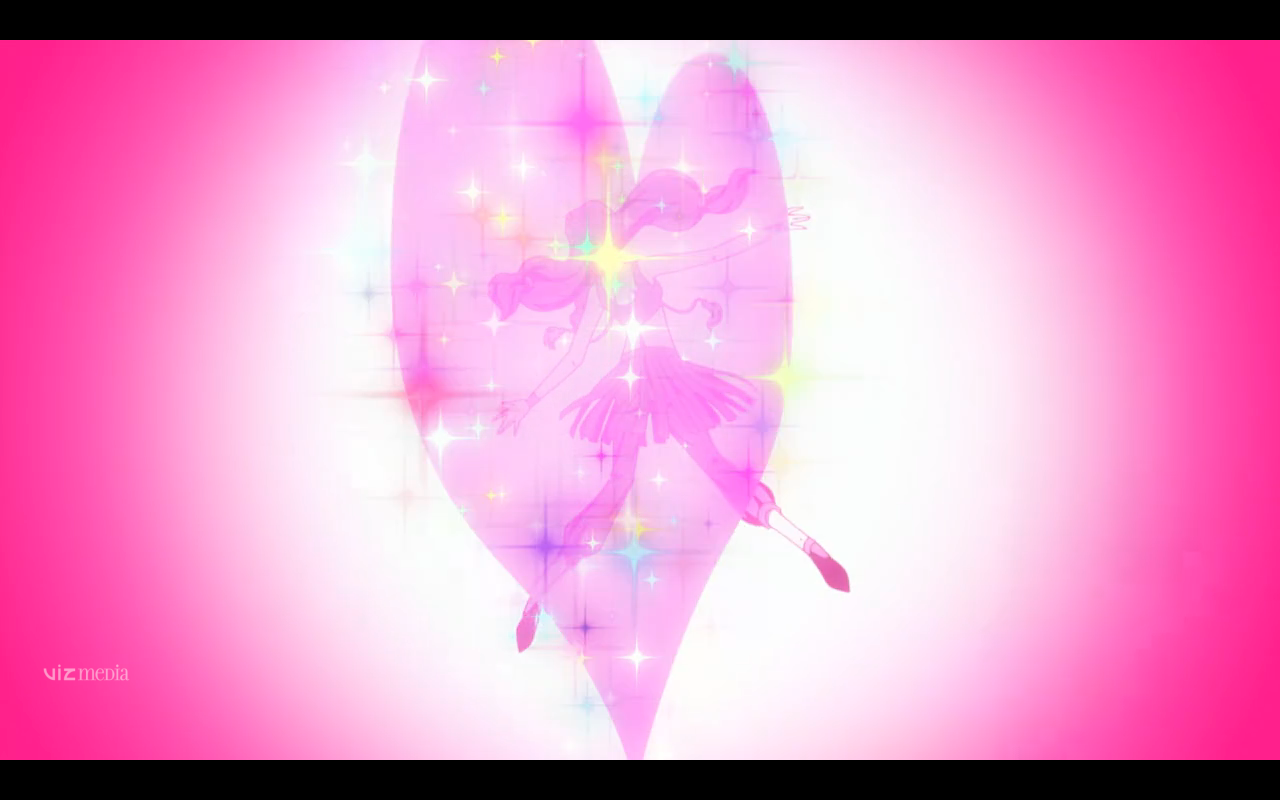 And Eudial’s…gone? Already? Ugh. So not only are they doing the same damn thing as last season, turning the Ayakashi sisters into mirrors for the Senshi in terms of their powers, they’re continuing this distressing trend of killing people rather than saving them. Original Sailor Moon was very careful to ensure that only androids, card-projections, weird pseudo-eggs, and the like were killed—the people they took over weren’t harmed, and the instigators were eventually reformed. So why this shift to the more violent and less interesting destruction? I harp on this, but I think it’s important. This show was, at its heart, a hopeful meditation on the ability of kindness and friendship to literally reform the galaxy. They’ve traded that philosophy for some fight scenes and the cheap thrill of another mini-boss defeated. 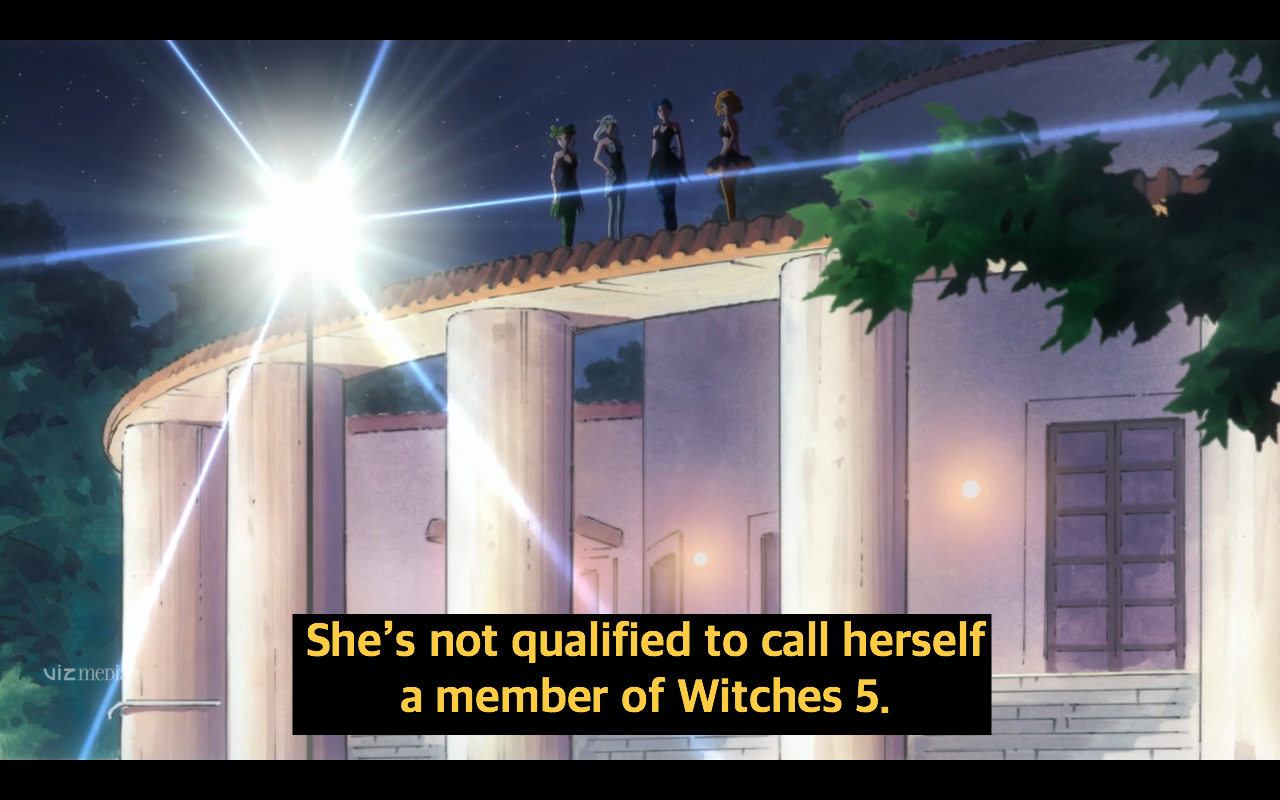 Wouldn’t it be Witches 4 now?

Their choice to make the Sailors, especially Sailor Moon, more powerful is another one I’m not totally sold on. Yes, it’s nice to see the sailors at a disadvantage but still holding their own. Yes, the battles are well done. Yes, we only have a few episodes as opposed to 200 to tell this story, and character growth from weakness to strength takes time. These are all legit, but this story is about the growth of young women into adulthood, moving from weakness to strength, and I miss the embrace of weakness. Sailor Moon was never the strongest badass. What made her unstoppable was not her attacks, it was her purely good heart, her loyal friends, and her refusal to ever give up. I just want a little more of that, please.

But anyway, the Outers have been watching the battle, and they hoof it again when it’s over. Sailor Moon pursues them this time, and eventually catches up to Sailor Uranus. Sailor Uranus warns her away yet again, and then, rather incongruously and non-monogamously, smooches her right on the lips. Whoa whoa whoa, wait a minute, that’s the end of the episode? 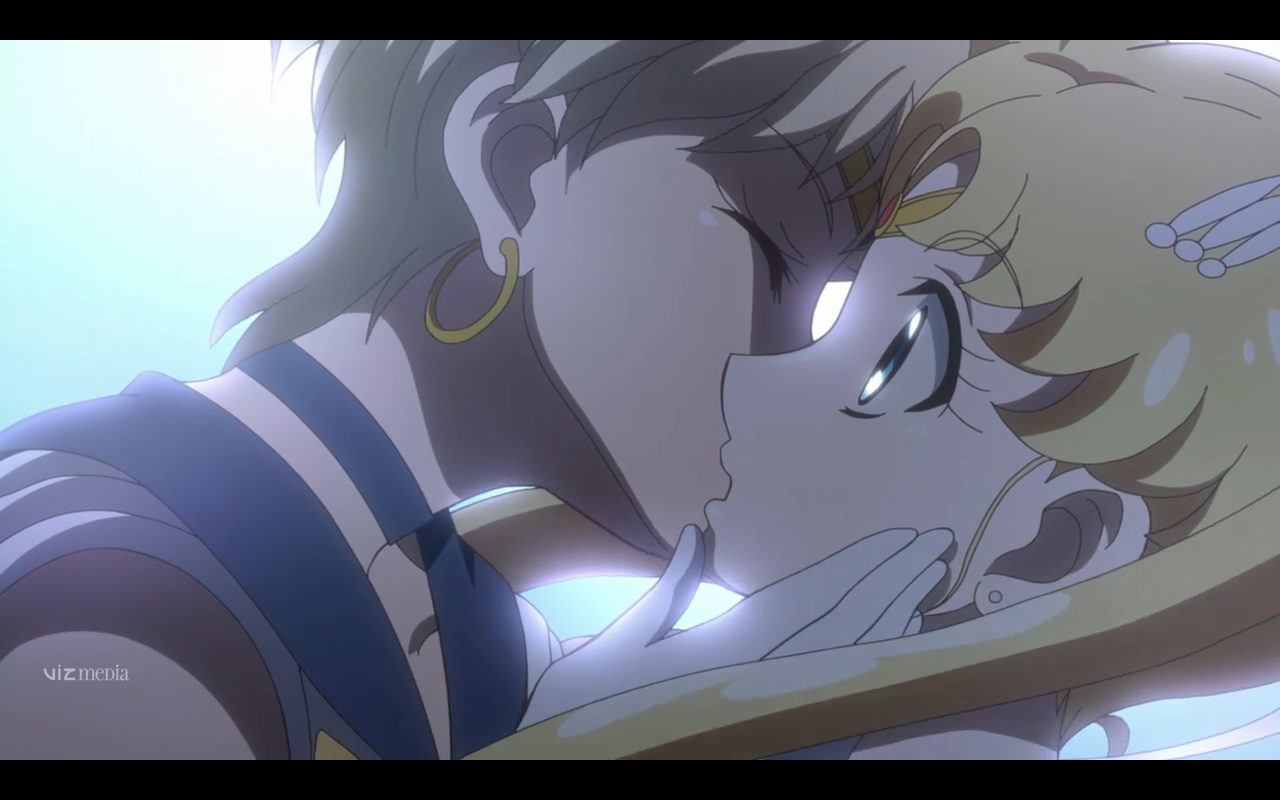 I’m not terribly pleased at this shocker. Uranus and Neptune were always kinda flirty with other people, but they were deeply in love with each other first and foremost. And even if they accept non-monogamy here, it’s still not okay to go around kissing other people out of the blue! Usagi has only ever kissed Mamoru, and she’s pretty upset! The lack of consent here is uncomfortable at best, and I am pretty disappointed that they use this cliffhanger for titillation.

Well, another halfway decent episode marred by bad conceptual choices, but at least not by shoddy animation or storytelling. Until next week, 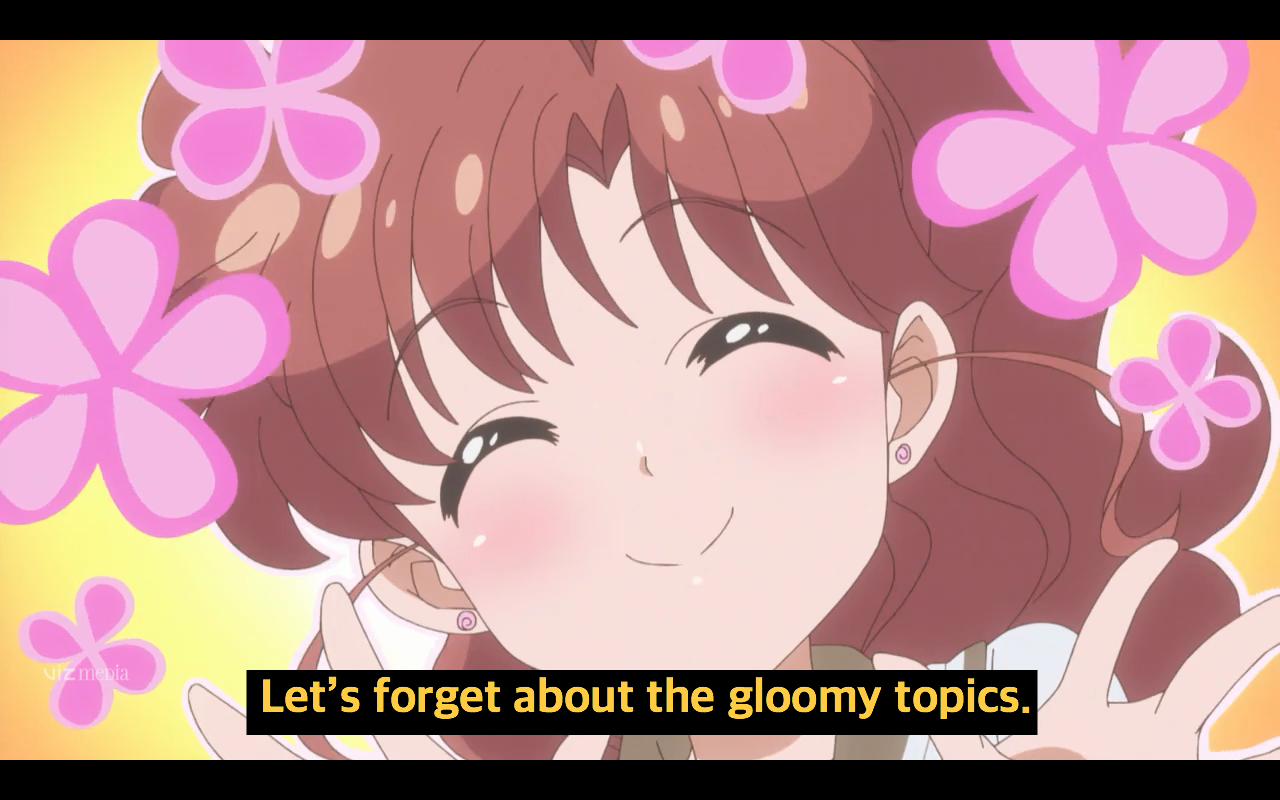 *The Inners at this point all think Haruka is a man (not clear what gender they assign to Sailor Uranus. She’s in a Sailor Costume, but she also has a Tuxedo Mask-like cape and mask, so really her gender is still uncertain by the show’s standards). In the canon she’s a woman and in a lesbian relationship with Michiru, so I’m going to use the pronouns her and she, but I think the character here is actually rather gender fluid, and props to the show for that.