Last night I was a real rockstar and went to bed at 10 PM. I woke up refreshed from a dream about Mads Mikkelsen, and had tea and homemade scones for breakfast. And yet, I still don’t have the energy to care much that Crystal is ending, or how it ends.

We drop back in where we left off – with the team taking on the alien fetus head known as Death Phantom in some kind of negative space. Sailor Moon blasts it with the moon rod, and then they’re all back on desolate planet Earth, without their leader. I paused for a minute to thank Omorphos Parthena, little-known tenth muse and patroness of shojo, for the fact that after today, I will no longer have to watch the listless, blank expressions of flat characters uttering things like this: 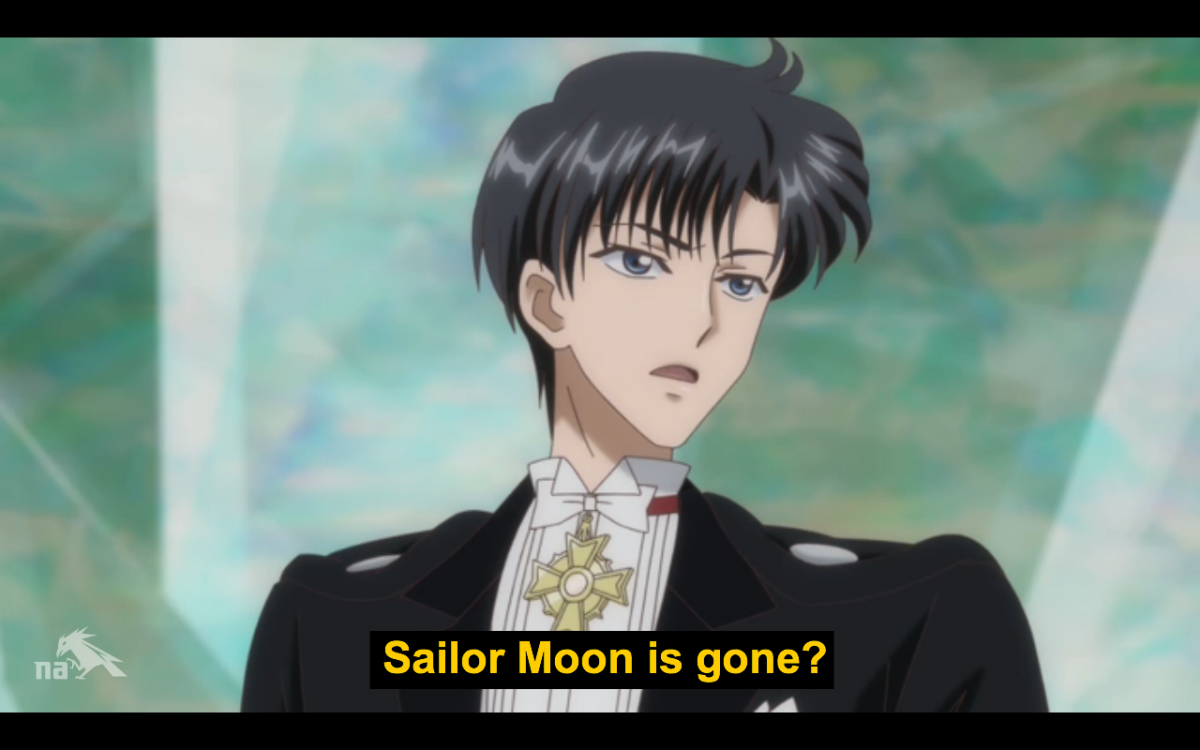 Your wife, the mother of your child, has just vanished. Did you secretly have designs of sole rule? No? Then EMOTE.

Maybe his hands do his emoting for him, since they clench in a manly fashion and then fill with light. He vanishes. Cool. At least we don’t have to hear “tuxedo la smoking bomber” again. This is apparently the catalyst to finally awaken Neo-Queen Serenity. She wakes up King Endymion with a nice gender-reversal of the sleeping princess trope, puts Pluto’s body inside the crystal palace, and has a tender moment with Chibi-Usa. It was a solid B+ moment, but the original was an A+. 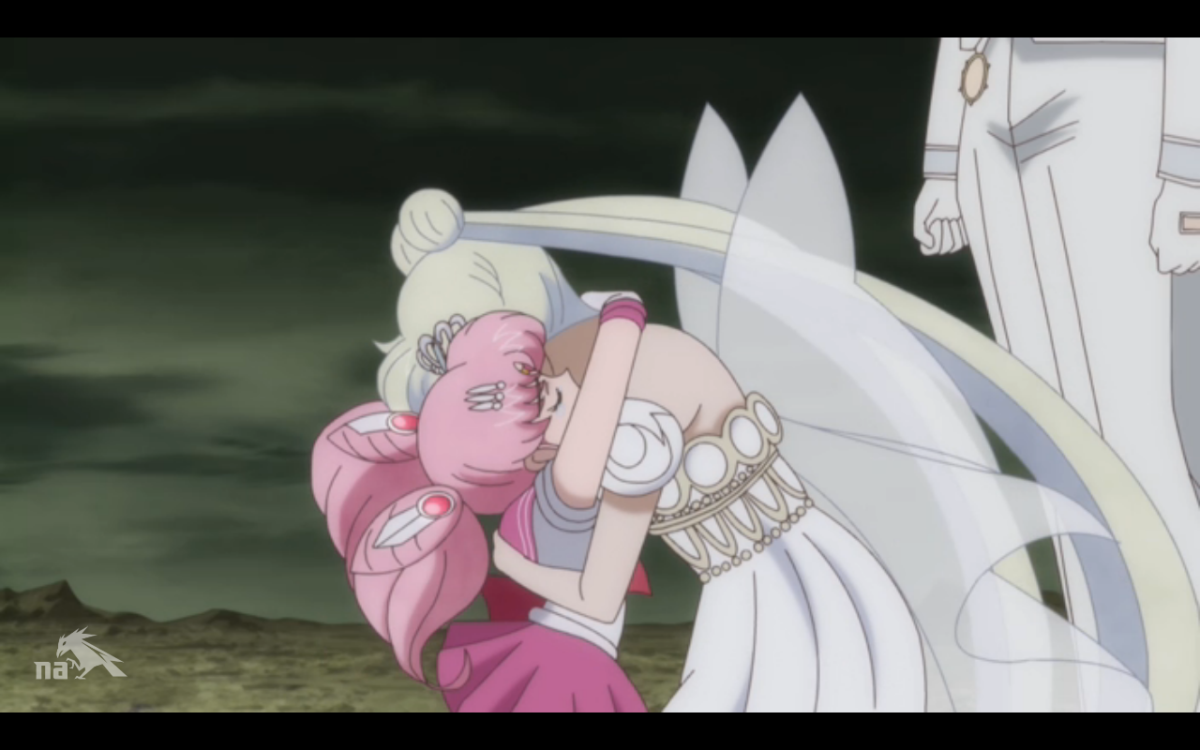 And then, as is Crystal’s wont, everything is completely spoiled when she tells everyone that when she became queen, she “lost nearly all [her] ability to fight as a guardian.” She then blames herself for all the destruction. Right, because mothers can’t kick ass, and women rulers should be graceful rather than awesome, and victims of violence should definitely blame themselves. What a load of sexist crap.

Everyone accepts this without blinking (literally – I will never not be annoyed by this static animation), and then Neo-Queen Serenity tells them that Sailor Moon is probably somewhere out in the reaches of space. Just…whatever. Okay. Stop info-dumping, please. Please? Maybe you could do something that makes intuitive narrative sense for once and not explain…?

No. On go the explanations. Chibi-Usa is the only one who can reach them blah blah blah. Serenity sends her off by herself, into extreme danger, and when the Senshi try to go with, Serenity is just like “nah, let’s just wait.” If the show wants to maintain any pretense that the outcome is not already decided in favor of Sailor Moon, then we should worry for Chibi-Usa, and we should hope that she is as protected as possible. Doing it this way either wrecks the tension, or has Serenity come off less as “wise and has faith in her daughter,” and more as “a crappy mother.”

Meanwhile, Mamoru and Usagi are floating in space, and not in that cute Flaming Lips way. Usagi has yet another crisis of confidence, asking whether the Death Phantom isn’t right about this whole “destroying the universe thing.” Look, there’s uncertainty, and then there’s stupidity. This is the latter. Mamoru gets to cheer her up… 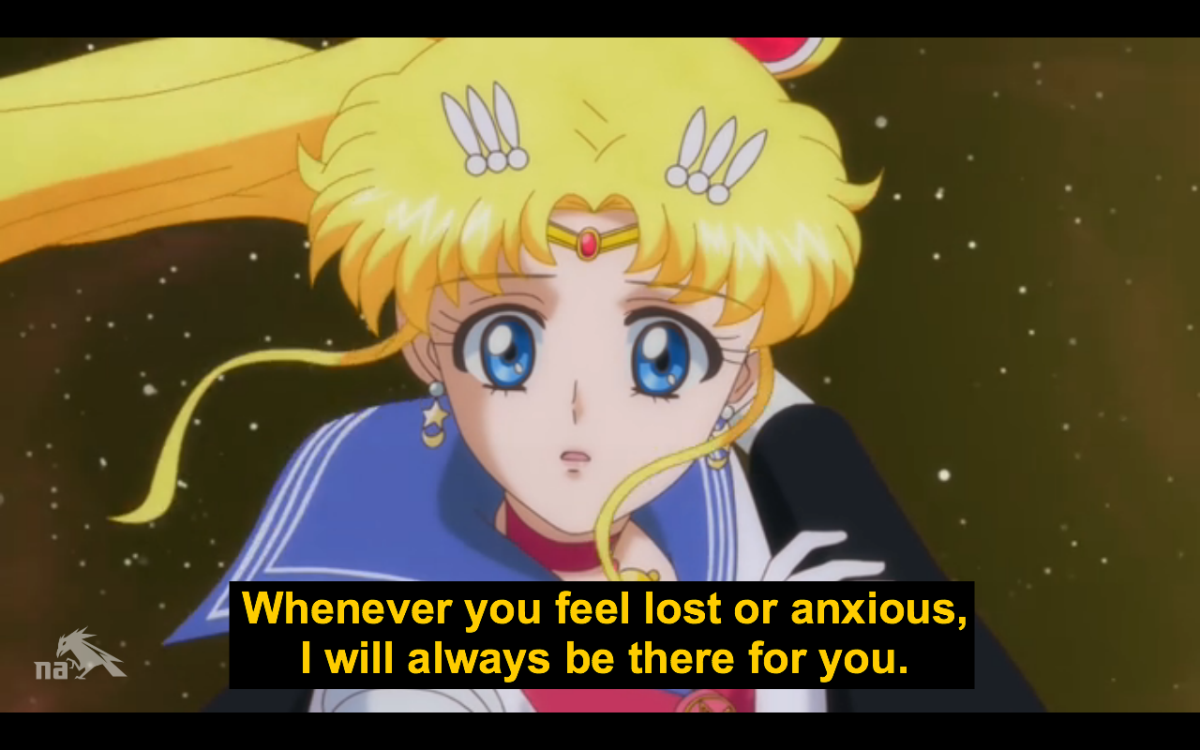 …and gets to conveniently forget about last episode, in which he was so far from “there for her” that he actually struck her with a blunt object and ripped away her source of power. Nevertheless, his little speech perks her up, and she says (I shit you not), “I can only activate the power of the Legendary Silver Crystal in the presence of your power.”

What? WHAT? Sailor Moon needs a man around to even activate her power? NO. NO NO NO NO NO. Fuck you, Crystal. Just…fuck you and your stupid anime-by-committee bullshit.

Chibi-Usa appears after they say some vaguely sexual things (yeah, conception and birth metaphors, I get it), and they blast Nemesis into nothingness. Great. Yet again, the climax is neither visually interesting nor emotionally resonant. The only thing I might have gotten out of it is that they’re fighting Nemesis as a family instead of “just” as mother and daughter, but that was true of the original too, just more subtly. The original did a much better job of creating emotional depth at this climax, having Usagi and Chibi-Usa finally understand one another, and accept their roles as mother and daughter, and apologize for their past misunderstandings. I cried. With Crystal, I shrugged. 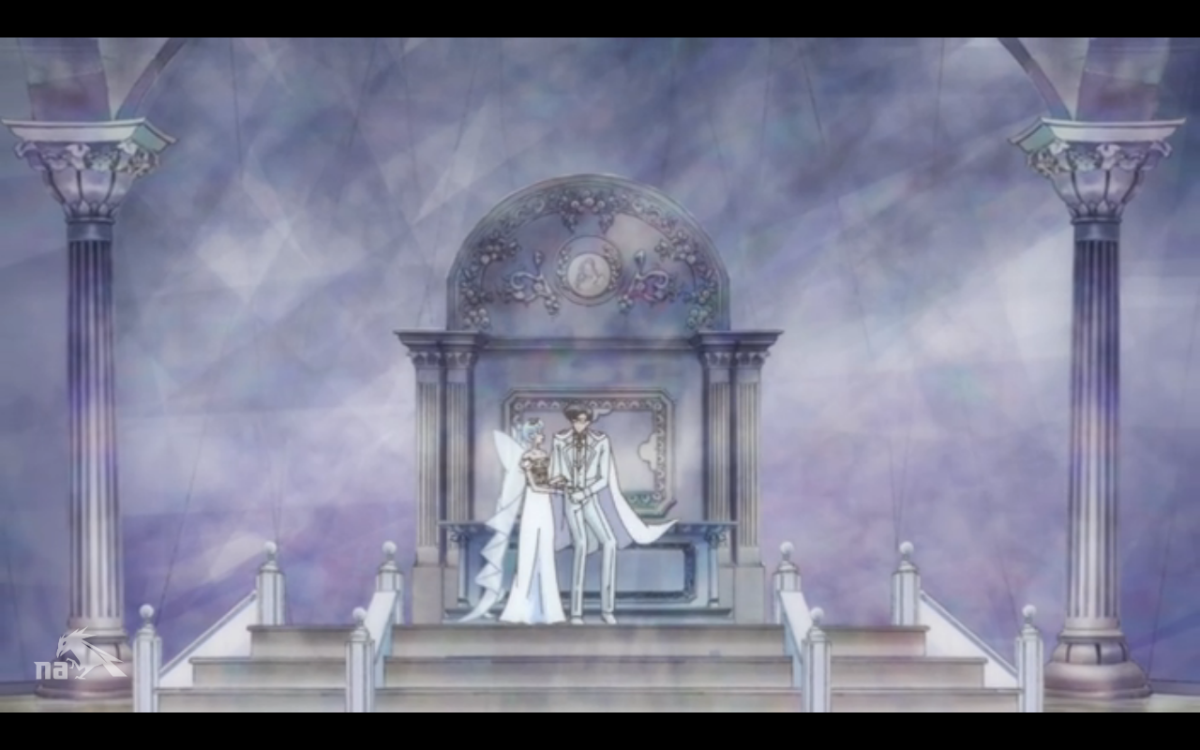 Anyway, 30th century Earth is back to normal. No effort required, it seems. And all the people who were dead and decaying…are they alive? Does that mean Pluto is alive, too? No, she’s dead. Ugh, no logical continuity. Usagi don’t care, though. Usagi just wants to see her future self—and the Queen wants to see her past self, so despite the dangers of time paradoxes, they run toward each other.

Since Crystal lacks any of the original’s sense of humor, no one comments on how weird it is to have the past and present versions of the characters meet each other. It’s inherently kind of funny, but they play it as purely emotional, learn nothing, and then the scene ends. Naturally there are no consequences. 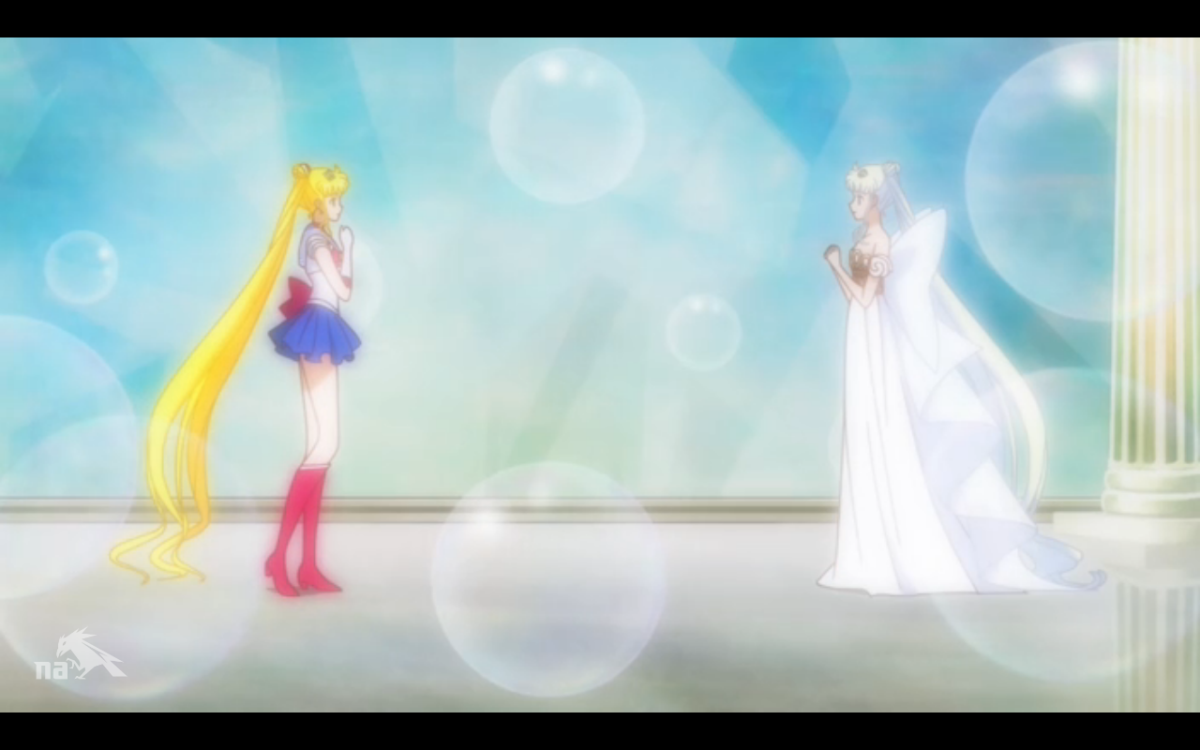 They all go home, everything’s back to normal, blah blah, and Chibi-Usa has to go home. Considering how the Senshi have basically been non-entities this whole season, it’s fitting that they don’t even get to see her leave. Only Usagi and Mamoru are present, and they have a sad little parting. Still no one comments on the kind of funny weirdness of seeing your future daughter disappear into the future and being sad about it. Nope.

Vague statements about hope and positivity, a kiss and…oh, Jesus, it’s still not over. Chibi-Usa falls from the sky again, and I had to pause and hyperventilate lest this be a never-ending time loop of Season 2 from which I could never escape. Thanks be to Muse Omorphos Parthena, this was not the case. Chibi-Usa was simply coming back from the future in order to stay with Usagi, proving to me that Queen Serenity and King Endymion are kind of shitty parents and that this show hates its source material and its fans. First of all, they glossed over the fact that Neo-Queen Serenity wrote the note without any kanji, meaning that she never managed to become a very good student–it’s a great joke in the original. Second, Chibi-Usa’s return is supposed to be a delightful surprise, and is supposed to feature the hilarious “Pink Sugar Heart Attack!” It is not supposed to be an almost instantaneous piece of wish fulfillment.

And then “à bientôt” (“see you soon!” in French) flashed across the screen, and I felt unaccountably wistful. Crystal, I feel badly for hating you so much. I wanted to love you. I wanted to be just as obsessed with you as I am with the original and spend time comparing your virtues and strengths. It brings me no pleasure that your bad qualities far outweigh your good. I stayed until the end, always hoping that you would improve and, while you did have your moments of glory, they were pulled down by the constant mediocrity and trampled upon by the truly heinous missteps. There was sexism, and pacing issues, and animation issues, and confusion about the very nature of the characters…oh Crystal. Maybe next reboot will be better. So yes, in that hope I will reply, “à bientôt.”