I was never much afraid of the Corinthian.

Oh, don’t get me wrong, he’s a good character. A great one. But mouths for eyes and a taste for eyeballs? It doesn’t really do it for me.

Still, I have to admit to getting the delighted shivers–the kind you get sitting around a campfire telling ghost stories–when he appeared, dark glasses and a white suit, ready to stalk some poor clerk and gobble his peepers. Sometimes there’s being truly, irrationally afraid, and sometimes there’s wanting to be scared, and Sandman: Overture definitely hits the latter.

Since this is a prequel to the classic series, it’s necessarily tempered by what comes after. The pleasure comes from meeting our old friends (and new ones) and learning not whether they survive, but how. As someone who habitually reads the endings first, I must say I find the how much more compelling than the whether. But even if you’re a fanatic about spoilers, it would be hard not to enjoy this book. 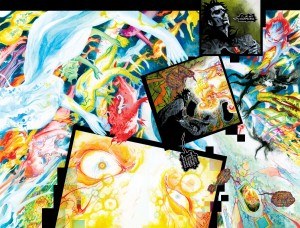 One of the most important solutions hinges on a short story contained in Dream Country called “The Dream of a Thousand Cats.” You don’t absolutely have to read this for the story to make sense, but it’s a near thing. The identities of the Endless are also fairly critical, since the book does not really attempt an explanation. Death, Dream, Destiny, Destruction, Desire, Despair, and Delirium (formerly Delight) are all mentioned, so at least a passing familiarity is required. But to really get the full measure of Sandman: Overture, yes, you do have to read The Sandman. It’s hardly onerous, though it is time-consuming. And it does make for an ironic setup going forward, since this prequel might or might not be the best place to start for a new reader.

Still, I can’t be sad to have an addition to the classic that is worthy of its name. At a time when Stephanie Meyer has simply re-released Twilight with some kind of genderswapped abomination dangling from its back end, Overture–despite the laps of 25 years–really does capture the magic of the original, while simultaneously doing something fresh. 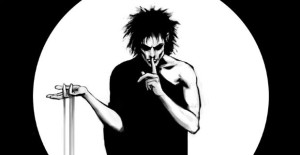 Dream, the moody and not-terribly-self-aware protagonist, knows that something is wrong. A wrongness of a particular virulent species, which is sweeping through the universe and ending whole worlds. Dream, being both a creator and product of the dreams of all living beings, is naturally concerned. Without the universe, the Endless…will end. But Destiny sees only inevitability, Destruction is nowhere to be found, and Despair and Death are perhaps a bit biased when it comes to apocalypses. But what can dreams do in the face of such dire chaos? As Gaiman notes, “all doors are dreams,” and Dream will have to journey to the furthest and most hidden doors to find the secrets of survival.

Ultimately, this conflagration is even more cataclysmic than the final showdown in The Wake, the final Sandman volume. So yet again, there is the sense that this is more of a capstone than a foundational story. It’s apparent too in the ways that this seems like a bit of a farewell, incorporating many of the best characters (like the Corinthian and Matthew and Mervyn and the sentient stars) very briefly, just because. 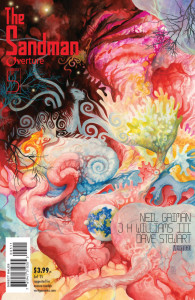 Neil Gaiman also seems determined to push himself to his creative limits here, holding nothing back from this, presumably his last visit to the Dreaming. The second chapter features a parliament of selves, different aspects of dream coming together to discuss an anomaly. Pharaonic Dream and Cat Dream and Robot Dream and Misshapen Blob Dream and all kinds of others–it’s one of those times when you can just imagine the author (and/or illustrator?) asking himself “what would be the most awesome possible thing?” and then doing that thing. Same with the city of stars, a neon metropolis, and the realms of Time and Night. Gaiman’s writing is as good as ever, mythical and funny and insightful, and J.H. Williams III knocked my socks off on almost every page with his glorious illustrations.

The art of the original ten-volume series always struck me as a little hasty–the lines a bit slapdash or the details incomplete. Not so this. This is perhaps the most polished, exquisite comic I’ve ever seen, depicting mad stars and alien landscapes with a marvelous confidence. I wonder how the entire series would have looked with Williams at the helm? It’s too bad it will never happen, but it does make me cherish this volume all the more.

This first-tale-as-last-hurrah is very much worth cherishing for all that you might want to put it after The Wake on your shelf, and worth all the re-reads you’ve probably given the original series. Even though there are always more stories that could be told about the Dreaming, this feels like a fairly good end. It’s sad and sweet, and the paradox of its timing makes it a fitting installment to a series about the strange realities of dreams.