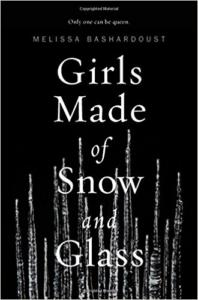 Girls Made of Snow and Glass (Melissa Bashardoust) – The writing is elegant, as are Bashardoust’s interpretations of the elements we all know so well, mirrors and apples and snow. Mina, the “evil queen,” has power over glass, which I found especially clever, and Lynet, the “snow white” has power over snow. The magic is crisp and smart, not overpowered but definitely powerful. But it’s not really about magic, or about ruling a kingdom (or two). It’s about some very complex psychological drama between parents and children, and how two women overcome them in their own ways.

This was touted as a feminist fairy tale, and while that’s true I don’t know that it’s especially or exceptionally feminist, not more than many other retellings I’ve read over the years. SFF and YA are doing a really good job, generally speaking, of promoting inclusion. Speaking of retellings…

The Language of Thorns (Leigh Bardugo)- If you read one book this fall, this is the one. Haunting, cruel, and ultimately wise, these six stories are flawless jewels.

Clade (James Bradley) – I was expecting this to be a slightly surreal take on global warming, IVF, and bees based on the jacket blurb, and–well, it is, just not all at once and not really that surreal. If anything, it’s a little too realistic. In this collection of sequential short stories, global warming has finally pushed humanity into a long, slow descent. 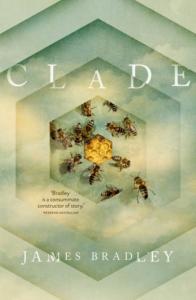 It’s like an incredibly depressing, incredibly well-written Martian Chronicles, if Ray Bradbury had absolutely no faith in humanity. (His outlook was ultimately a bit dismal, but still full of wonder and hope.) The landscapes are occasionally magnificent in Clade, but time and again we are reminded that no birds sing in the genetically engineered trees, and no massive zeal to change has overtaken the nations. People still mob grocery stores at the slightest hint of disaster, and governments still try to cover up and shift the blame. And it’s not dramatic. It’s barely even a condemnation: Clade is just a mirror in a dim room, reflecting humans’ abilities to get on with the day to day of marriage and divorce and put existential dread out of sight, out of mind. But it’s there. Whether you see that as a testament to human endurance or to human folly is the subject of these stories, but also ultimately up to you.

Norma (Sofi Oksanen) – This was exceptionally weird and weirdly compelling. A hypersensitive, moderately neurotic woman with magic hair gets entangled with a Finnish mafia family, all because her mother wants answers about the origin of Norma’s miraculous locks.

Yeah. I don’t know either. It lags in a few places, but if you like Murakami Haruki, who takes weird ideas very seriously, you’ll probably like this. Speaking of Japanese writers…

Strange Weather in Tokyo (Hiromi Kawakami) – Properly speaking, this isn’t a new release but a re-release of a story The Briefcase. It’s the softly bittersweet tale of two people of different generations falling in love. It is gentle with all the awkwardness of a May-December romance, and tender with the loneliness of two people who come to know each other by getting drunk alone at the same bar. Deeply emotional and deft, it’s a short novel but a powerful one. 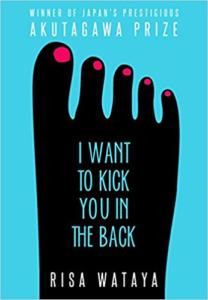 I Want to Kick You in the Back (Risa Wataya) – this was weird and slightly perverted. A girl experiencing some growing pains in the transition from middle school to high school decides to be a delinquent, since she’s already mostly an outcast. She develops a fascination with the other outcast in her class, Ninagawa, who is an obsessed fan of a mediocre, aging model. Wataya captures some of the awkwardness and prickliness of being young, and picks away at the myth of authenticity. Hatsu is a great narrator to follow around and the title is one of my favorites ever.

Bakemonogatari aka Monster Tales (Nisioisin) – I’d never realized there was a category in Japan of “light novels,” but I’m pleased to see these have been translated. They are light, and many of the conversations are witty but extremely silly. However, each story wraps up with a sudden and insightful meditation on a character’s personality and struggles, all within the context of a supernatural event. Curses abound, kami plague schoolgirls, and through it all, Araragi is our goodhearted and hotheaded narrator, ready to help with anything and likely to land in some dangerous trouble.