On tumbles our ever-growing tangle of Weird Old Westerns, because what do you want more than shoot-outs and cattle raids at the holidays? Right, nothing.

This time it’s Six-Gun Snow White, a not-really-fairy-tale taken loosely from Grimms and applied firmly to the mining towns and new money of Montana and beyond. There aren’t any cowpokes, but there is a painted pony named Charming. And there isn’t royalty or a huntsman, but there is a disgustingly wealthy businessman flush enough to hire a Pinkerton. But one thing’s for sure: there’s a magic mirror, and it’s no friend to Snow White. 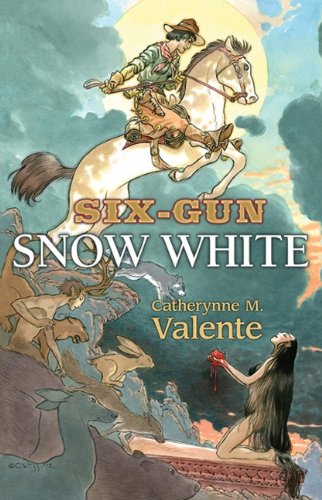 You will be most familiar with Catherynne M. Valente from her Fairyland novels, namely The Girl Who Circumnavigated Fairyland in a Ship of Her Own Making and its multiple successors. She’s also written speculative fiction aplenty, full of myths and historical fancies. Her style is highly literary, and also extremely playful. She’s an author who enjoys a story for its bones as much as for the way it gets up and walks around, loving putting each noun and verb in its perfect place before fleshing anything else out. She is sometimes overfond of adjectives, and can get caught up in a pretty turn of phrase to the detriment of her narrative. It’s generally better to treat her stories as spinning tops, things that glitter and delight as they go round and round the story before finally stopping on it.

This isn’t my favorite of Valente’s books. I’m sure there’s a reason for the chapter titles, which don’t exactly match up with the chapter contents except in metaphorical ways that I eventually could not be bothered to figure out, but they mostly distract. And I’m certain that there’s a reason that she switches from first person to third person halfway through, but the given reason feels thin, and again, the switch is distracting. This whole story feels distracted, like she meant to go in several directions and kept going between them instead, like a cat who won’t choose to stay out or go in. The ending is particularly odd, coming mostly out of nowhere, with only the thinnest knot of theme to tie it to the rest of the story.

That makes a sort of High Literary sense, I suppose, since Snow White is a mixed-race child, and neither side of her family accepts her. She’s also torn between going out and staying in, and the end of her story can’t be neat or too pretty. But my standards for re-imagined fairytales are high, and this became too abstracted to be either myth or reality, or even a hybrid of the two. It does, however, give me the psychologies that the original stories lacked. Abuse begets abuse, mother to daughter to not-quite-daughter; neglect and self-loathing are passed down to children as surely as the color of skin. It also answers that question of why–why would Snow White, being smart enough to stay on the run, be dumb enough to accept a poisoned apple from a suspicious figure?

I won’t tell you, since this is less than 200 pages and worth an afternoon, but some clever twists on an old tale and some quality writing don’t add up in this case to a classic of either the Old West or of fairy tales. Mostly they make a sad story, worth telling and worth reading for sure, but mostly in the context of other westerns or fairy tales.