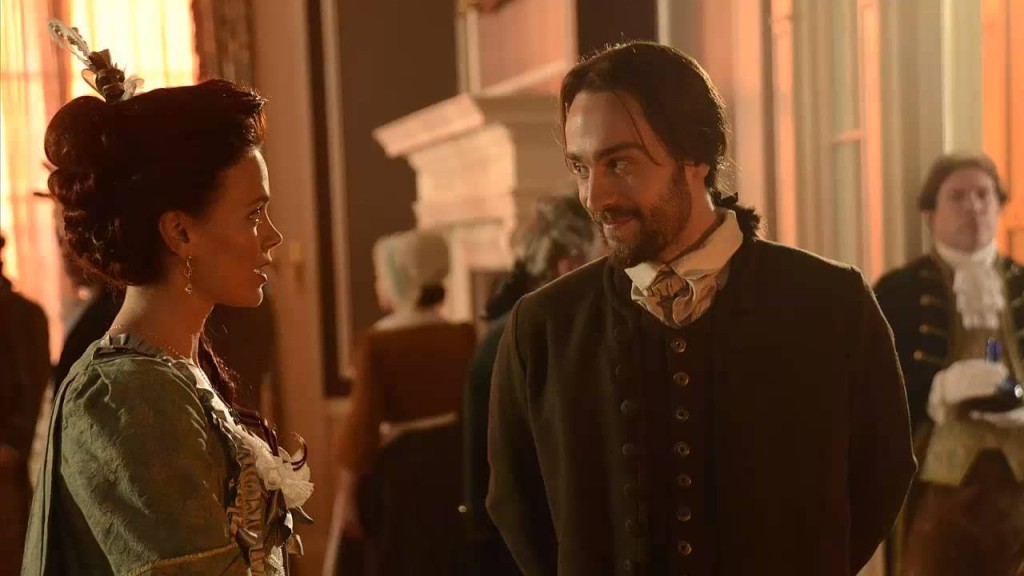 It’s a precise science, the perfect fist bump, and this week, we learned that metaphorical fist bumping, that is to say teamwork, is just as delicate.

We pick up where we left off – with the Horseman trapped in Jefferson’s Tanning Salon of Eternal Doom. Fist bumps are exchanged before it is decided that Kind of Zombie and Ex-Hand Model Andy Brooks will serve as a liaison to the Horseman during an interrogation attempt to learn his true motives. (Other than, ya know, End of Days.)

After Irving recruits Abbie’s newly released mental patient sister, Jenny Mills, and Abbie and Ichabod discover Andy’s hidey hole, the questioning begins. We discover that the Hessian has pretty good taste in jewelry – he possesses a necklace that belonged to Ichabod’s late(ish) witch wife Katrina, who it turns out was the fiancé of his best friend, Abraham. Meanwhile, Irving and Jenny discover an ancient Druidic relic has been stolen by those pesky Hessians, and the mercenaries also plan to cut the power to the UV lamps keeping the Horseman captive.

Once the power is cut and the Horseman is freed, we learn his true identity: the jilted Abraham. When the episode closes, the Horseman has vanished – along with Andy – and Ichabod is more determined that ever to free his wife from purgatory.

Noticeably absent from this episode was the humor of last episode – and perhaps rightfully so. Of course there were a few choice jabs at the French and Ichabod’s feigned knowledge of modern day idioms – you’ll get ‘em one day, Ichy – but for the most part, Necromancer earned the title of tensest hour yet.

What we have here is less a bottle episode, and more of a Molotov cocktail episode – contained but explosive. While the traditional function of such an episode is less to advance plot and more to cut production costs or examine character complexity, we experienced perhaps the biggest plot twist of the show to date – the Horseman’s true identity: Ichabod’s other BFF (sorry, GDubbs), the cuckolded Abraham.

There’s no denying the chemistry between actors Tom Mison and Nicole Beharie, who play Ichabod and Abbie, and the previous seven episodes have been an exposé in an odd couple, buddy cop type friendship: an unlikely pair who understand one another and mirror each other on a fundamental level. Two Witnesses in an apocalyptic pod.

But now, eight episodes in, the fault lines in Ichabod’s remarkably collected façade are beginning to show: he has no family, no comprehension of most modern amenities, and fist bumps are a mystifying depravation of a nice, courtly bow. With the Horseman so plainly in front of the Dream Team (which has now expanded to include a released psychiatric patient and an ambiguously dead guy), the Seven Years War is a tangible reality. 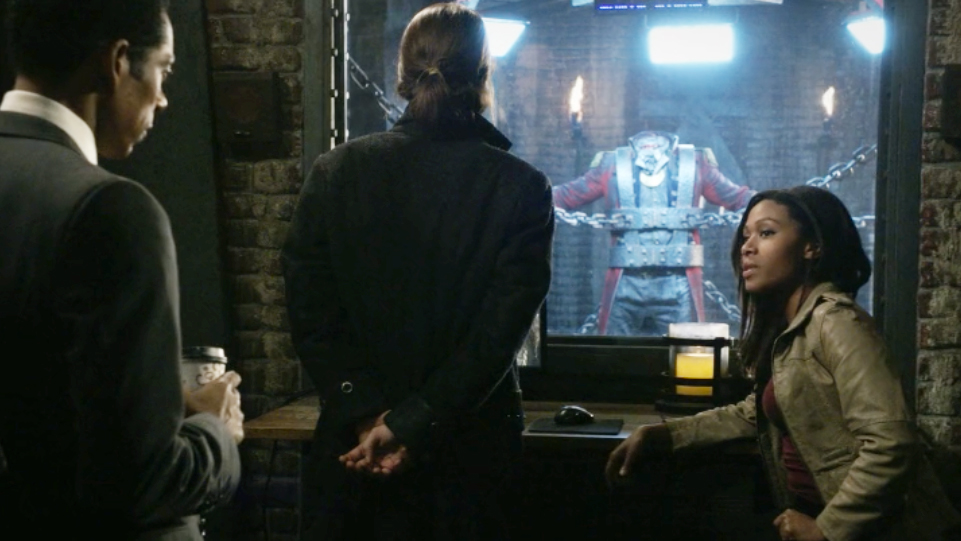 Where previously we saw the strengths of working together to defeat foes such as the Sandman, cure the Black Roanoke Death, and burn a wicked witch, here we see a nation divided – the consequences of hubris and the ramifications of entropy.

Ichabod allows himself to be manipulated by Mr. Abraham Horseman because of his own desire to learn more of Katrina and the Hessian’s connection to her. Although Abbie attempts to keep him grounded (“We are looking for his weakness, don’t let him find yours”), Ichabod disregards her warnings, pressing forward and putting his work as a Witness second to his passion for Katrina. He ignores the basic fact that he is not dealing with just any individual, but the incarnation of Death itself.

We also see Ichabod’s past quarrel with Abraham while delivering the Declaration of Resolves, which underscores how division can lead to destruction – of a person, and maybe of all mankind. (Almost lost America AND the world for us, Ichabod. Thanks a lot.) 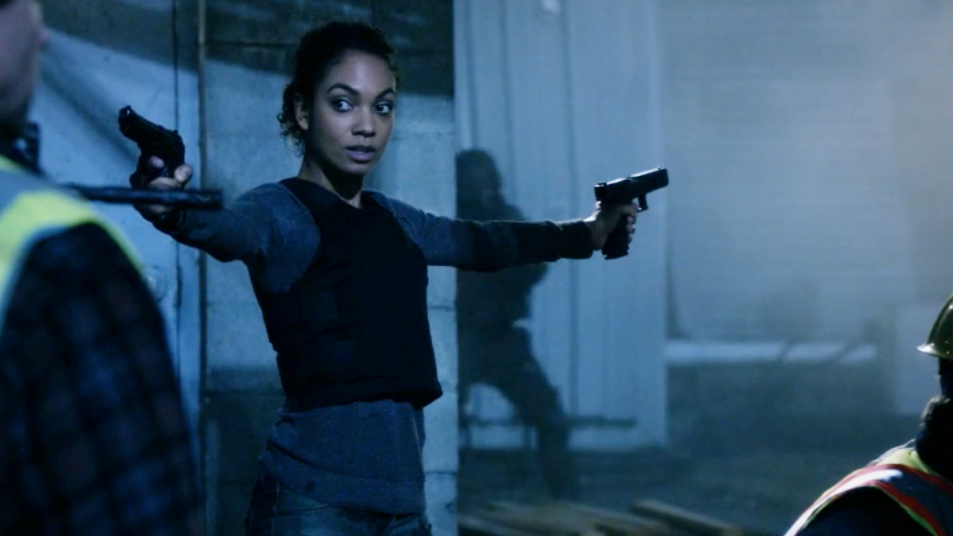 In contrast, teamwork is shown as an effective tool used by Irving and Jenny. Although there seems to be something fundamentally illegal about equipping a freshly released mental patient with two police issue Glocks, the pair and their heavily armed back-up crew proved that personal victory is not paramount when danger is certain, not probable.

In his selfishness, Ichabod leaves himself vulnerable, allowing for a wedge to be driven between him and Abbie. He may not like it, but his Destiny must come first. And Ichabod, honey, if you want to survive the next seven years, it might be wise to keep the team together, listen to Abbie – and work on those fist bumps. 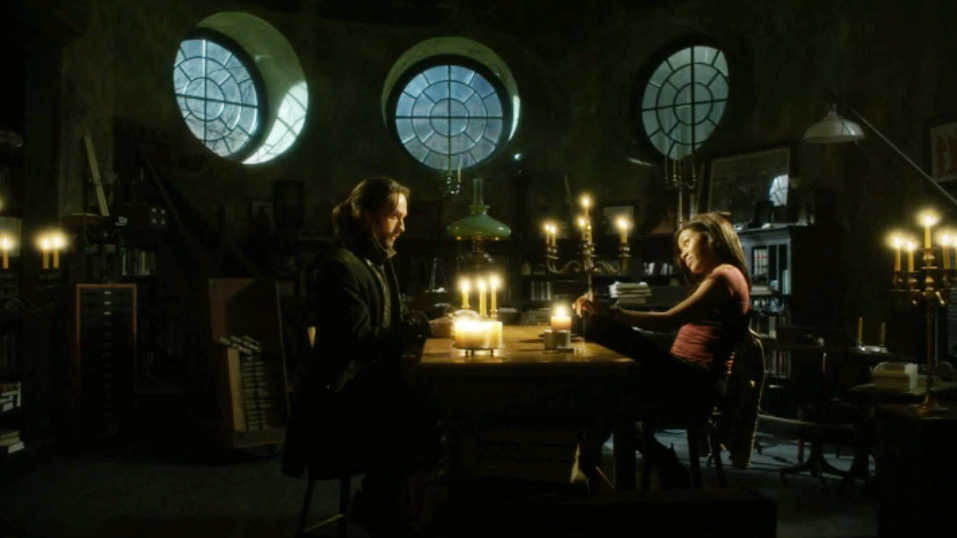 – Who is meant to kill Ichabod? Moloch himself? Is Moloch the devil? What is the deal with that guy?

– If there are any Quakers out there, help me out: Is Katrina the worst Quaker ever? What was with the glitzy gown and fancy fiancé?

– If the horseman of the apocalypse can be created so, and he is Death himself, does that mean that even if they were to destroy his physical form that he could manifest in another being? That Abraham is just a vessel for evil itself?

– In fairness to Andy, he did totally warn them.

– The whole “betrayed and killed your partner” echoes Abbie’s betrayal of Jenny explored briefly in the Sandman episode.

– How about that dude playing the armonica? Turns out, that particular design and arrangement of the instrument was created by none other than Benjamin Franklin.

– Speaking of Franklin, I love the little Founding Father Easter eggs hidden in this show. We had the bust of Franklin in the antiquities shop, which was owned by a man with the last name of Adams. I see what you did there, writers. We’re going to learn soon that Hancock signed his name so large because it is actually a stenanographic precursor to the microdot or something.

–  Abbie fricking telling it like it is: “People make their own decisions. You are not responsible for his actions. That is your arrogance talking.”

– Feminism again – instead of, “Hooray Ichabod for thinking that women had meager rights back in colonial times!” Abbie retorts: “Still better to be you.” (That is, a white male of relatively substantial means.)

– Mark Twain, one of the “new” authors Ichabod mentions reading, was a Mason.