Once again, we’re in rebellious territory with Snow Like Ashes, the story of a band of refugees set on reclaiming their homeland at any cost. The escaped citizens of Winter, a magical kingdom forever frozen in that single season, lost everything to the evil denizens of Spring. To fight back, they need to reunite the broken halves of their national heirloom, a locket that allows (only) the female monarch to channel magic to her people. Only then will they even have a snowball’s chance. 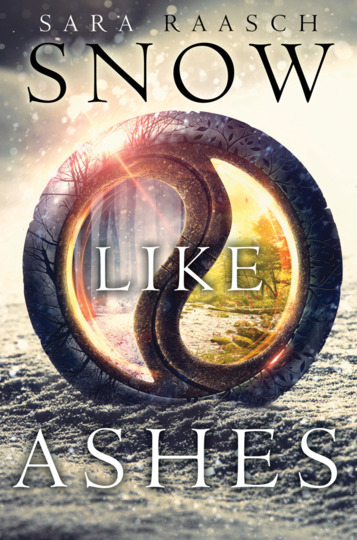 Except it’s twenty-odd magic-less rebels against an entire magical kingdom, and their surviving monarch is male, and they don’t know where either half of the locket is, and they’re broke and hungry and hunted and without allies. Things are not looking good, but Meira is undaunted. The orphan girl longs for her land, but how much is she willing to give up to get back there?

Meira struggles not only with her personal growth, but with the best way to be of service to her people, and whether the one negates the other. We see her in exile, in no-win political situations, and in among the refugees, experiencing the plight of her scattered nation from all vantages. I was particularly impressed with Meira’s sense of guilt, which while not a pleasant insight was certainly a necessary one. Being one of a few refugees to escape capture would weigh on a person, and Meria’s internal battles are poignant. She doesn’t let it get in the way of her sass or her fighting spirit, or in the way of her compassion.

Ultimately what the book lacks is gravitas. There are some scenes that are vivid and poignant—Sara Raasch has a good sense for vivid imagery, in particular—but the language of grief and fury isn’t quite there. Nor is the pacing: the plot runs at an equally brisk trot through scenes of courtly frippery and work-camp slavery. I like non-stop plotting as much as the next gal (Brandon Sanderson is a favorite of mine for that sort of thing), but for a book so steeped in heavy realities, we need more than forward progress. We need to be allowed to feel that weight.

The absolute pinnacle of this new breed of YA that deals with the plights of oppressed groups is Melina Marchetta’s Lumatere Chronicles. Snow Like Ashes doesn’t reach those heights, but it’s a valiant effort to push the conversation up that slope. In particular, I’m pleased that we’ve come so far from modern fantasy’s Tolkien-heavy beginnings. The “magical object” genre (or magical mcguffin, depending on the extent of your patience) is vast and tempting. You don’t need psychological insights, a grasp of politics, an understanding of social issues, or any of that complicated crap. You just need That Thing.

Sorry not sorry for the earworm.

Of course, good fantasy will always have more than just That Thing or That Person, but I’m thrilled to pieces that YA fantasy, and fantasy in general, is either subverting or getting away from that tendency. You don’t need That Thing. You need people and home and yourself and hope and all those good things. Snow Like Ashes starts out with a magical thingamabob, but quickly gets to much deeper issues.

Since this is the first in a planned trilogy, with the second volume out this fall, I’m hopeful that Raasch will continue to improve. I look forward to continuing deeper into this world, which despite its flaws is a fascinating place to be.