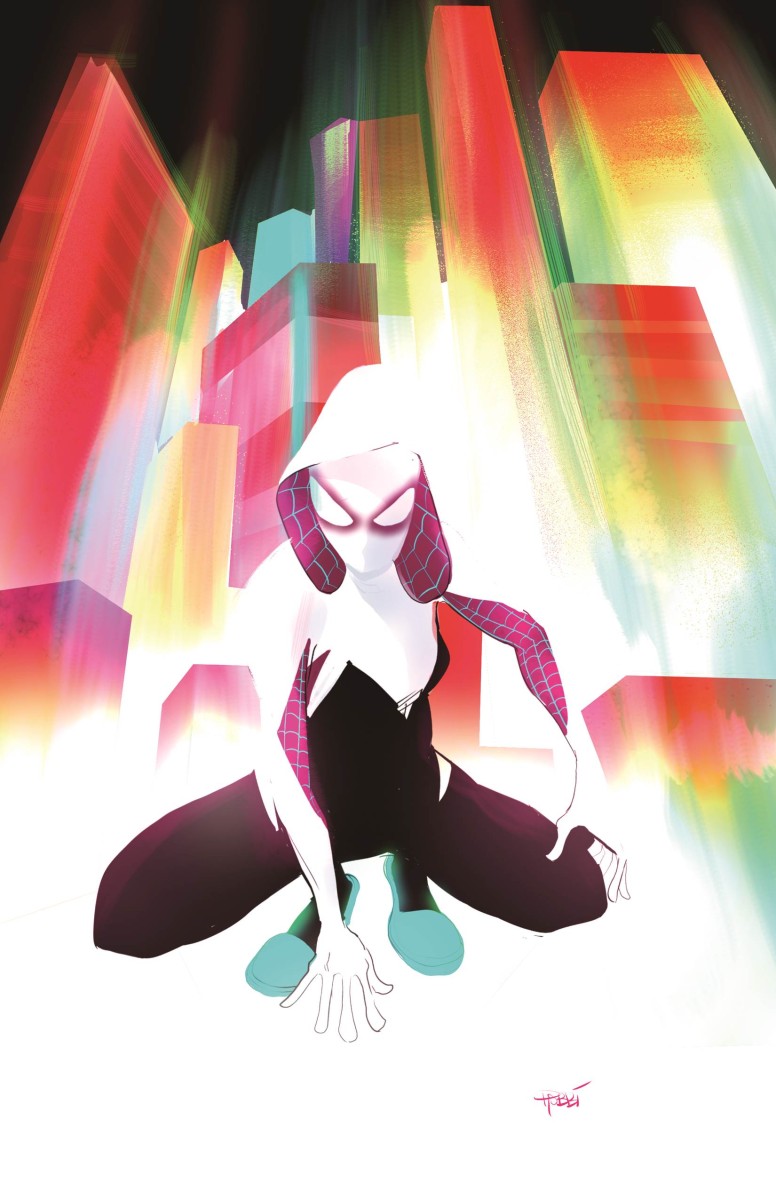 Written by Jason Latour and Art by Robbi Rodriguez

It’s here! One of the hottest new comic series starts this week with Spider-Gwen issue one. This issue, while not being absolutely mindblowingly awesome as the character’s introductory issue in Edge of the Spider-Verse, still delivers on the promise that Gwen Stacy is your new favorite comic book hero.

This issue picks up after the events of Spider-Verse that are wrapped in the this week’s The Amazing Spider-Man (which is a much better issue than the previous one), with Gwen returning to her universe to continue trying to clear her name as Spider-Woman. What makes Gwen’s universe interesting is the changes Latour makes in the positioning of characters in the world. Besides Peter Parker dieing after becoming this universe’s Lizard, other major Marvel characters are in quite unique positions. Matt Murdock, for example, seems to actually be working with the Kingpin instead of trying like all hell (see what I did there?) to take him down. It was also revealed in this issue that police officer Captain Stacy, Gwen’s dad, was being taken off the special task force he was put in charge of to take down Spider-Woman.

And who else would take his place? None other than Captain Frank Castle! The Punisher is a cop! Latour also delivers on the humor. It isn’t a spider comic without our main character cracking wise and being a nuisance to the bad guys. Latour soars at this as not only does Gwen make some hilariously childish jokes while fighting her inaugural bad guy, the Vulture, but it shows her using her intellect by reading the psychology of the situation.

The art is mostly great with a few hiccups now and then. Rodriguez nails it when it comes to Spider Gwen’s look, and somehow manages to encompass everything promising about the character in ever frame she’s in. This goes for how the Vulture is drawn as well. His nasty teeth, wrinkled skin, and all-red eyes are visceral in their own cartoon-styled way. The hiccup I mentioned earlier is in the normal characters, and more specifically, their eyes. Many characters don’t seem to have eyelids, which gives everyone a constantly surprised look for much of the book. That might be a deep nitpick on my part, and it may not bother anyone else, but when I examine a character I tend to start at the eyes. Other than that minor gripe, Rodriguez knocks it out of the park.

This is a must-have, must-read issue. The sheer excitement of this actually happening and coming out is incredible. Spider-Gwen would not have happened were it not for the fans outright demanding that they do it. So be sure to swing by your local comic store (find yours here!) or buy it digitally like I do! I prefer comixology myself, but there are plenty of places across the web (heh heh) to get it! Just be sure you! And now, here are some variant covers for Spider-Gwen #1 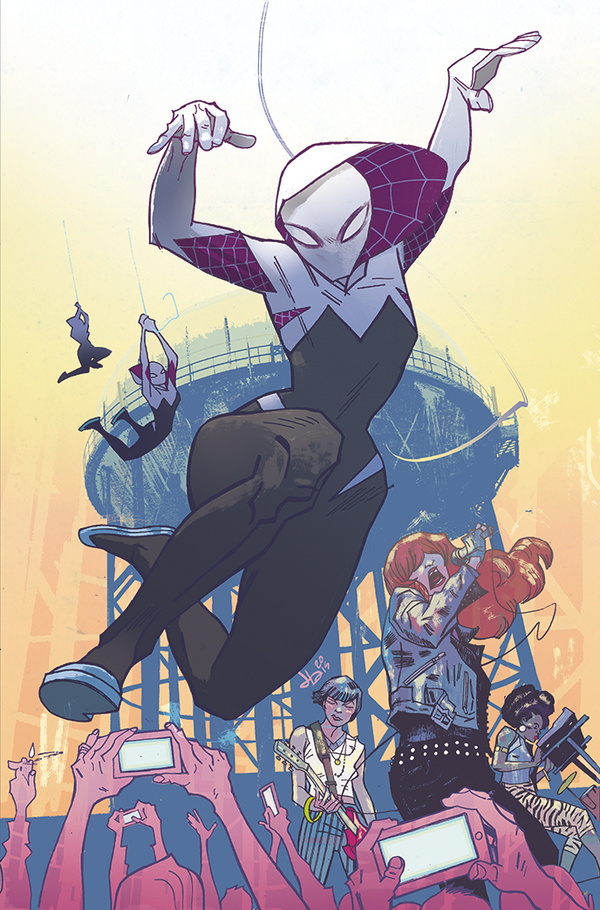 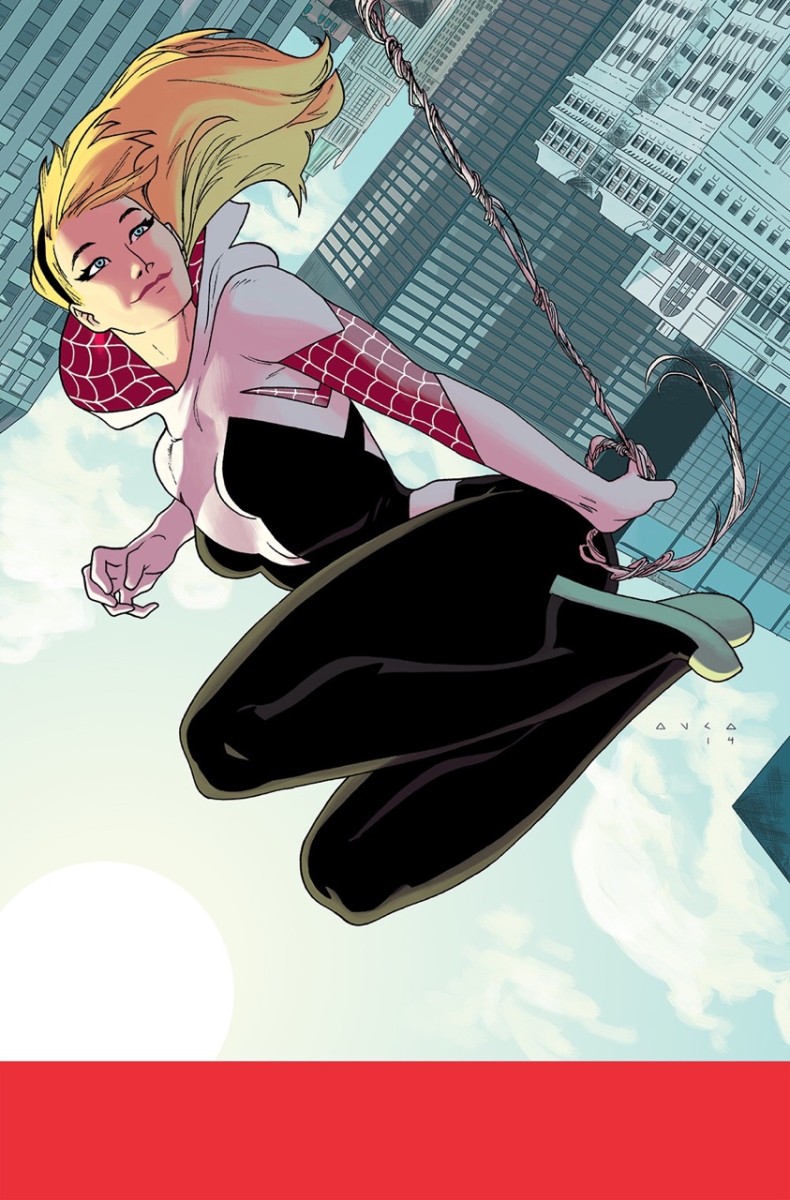 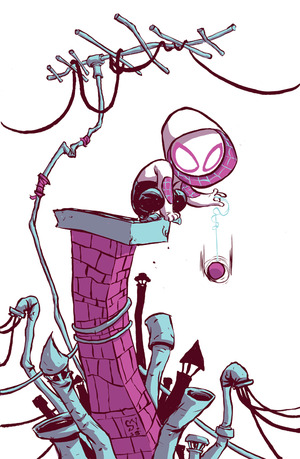 Did I mention that Gwen is in a punk band with Mary Jane? YUP! And the most excellent band Married with Sea Monsters did a cover of the song they play in the Edge of the Spider-Verse debut issue! It’s too good, have a listen