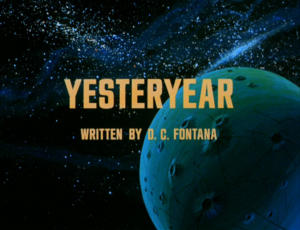 A review by Samuel Brady

Yesteryear is a tremendous shining example of some of the best that Star Trek can be to people. Whether you’ve seen the episode or not, I want to share with you an exchange Lenord Nimoy, the actor who plays Spok, had with a young viewer through the now out of print FaVE! in 1968. 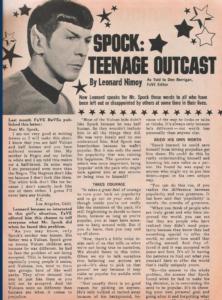 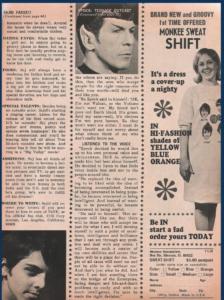 I found this letter to the editor from an NPR story. Whether you read the NPR story or not, the correspondence is a must read.

I thought about this exchange constantly when watching this episode. The heartbreaking hopeless resignation of the young viewer breaks my heart every time I read it. I appreciate that Leonard Nimoy spoke to her at great length, devoting the entirety of his part of the article to her – to let her know that he knows she will be loved and accepted for who she is and to encourage her to have courage to be herself. Its also worth noting how much he appreciates that people can be terribly cruel and that it will be hard.

So if you are reading this review and have not seen that episode, my advice to you is that you watch it. Don’t worry–I’ll wait.

Welcome back! I hope you enjoyed having your mind blown. Now to the episode at hand, Yesteryear. We begin in stardate 5373.4 around one of the more iconic planets in Star Trek where the Time Vortex and its guardian live. 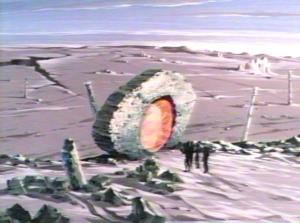 Here we have a team of historians who are conducting a complete review of all of history (!!!) and have decided they just aren’t cool enough to travel through time without Marty McFly or James T. Kirk so naturally they let Kirk have all the action. It should be noted that these historian’s eyebrow game is on fleek. 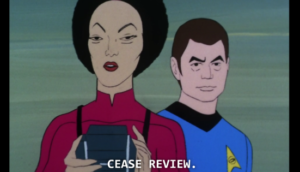 Oh and also one of the historians is a giant bird. Which is excellent. 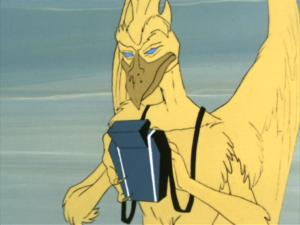 Its at this point when there is supposed to be a huge amount of heightenin. When we’re supposed to really feel the sci-fi, feel invested and being to feel the drama. The historians and their Enterprise help don’t recognize Spock. There is something that really truly falls flat for me here… something that is not executed well. And that’s Bones. The writing doesn’t feel like him. He acts all demure and go with the flow and never overly excited or put out by the chaos around him. Also the voice acting is really not great. I am not blaming the actor necessarily, we’re in the 70s Trek was not a giant priority for networks it had to fight for every gasp of air and resources it received so it’s not unusual to have something suddenly feel… different. Off. Rushed. Whatever happened it’s pretty mood breaking for me but we’ll continue.

Nobody can remember Spock. And even though they are standing right by the most VITAL PIECE OF KNOWLEDGE AND POWER IN THE ENTIRE GALAXY nobody is phased whatsoever at having a total stranger around. One who if he wanted could jump through the portal and remake all of creation in his own image. Overly trusting Federation am I right?

Kirk beams the landing party up to the Enterprise right away. Again nobody recognizes Spock. And the person who greets them is this timeline’s Enterprise Executive Officer an Andorian named Thelin. 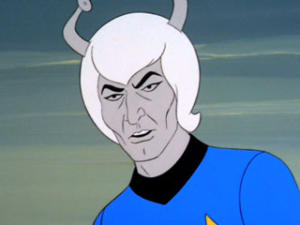 Thelin’s eyebrows are just to die for. The alternate viewing of this episode is that this alternate timeline is one where instead of being promoted on merit you advance in society by having the most perfect eyebrow game. Sort of like the Invaders and their Tallest.

Normally there would be a little more head scratching and theory crafting by the senior officers but this isn’t their first rodeo. They’ve been here before. They quickly understand that they changed something in the past making it so Spock’s timeline was altered.

They search the computer for the history of Spock’s family. This is a point to mention how historic Spock’s family is. Everyone the era of the Enterprise is weirded out by seeing Spock because Vulcan’s don’t widely serve in Starfleet right now. Earth and Vulcan are the most alliance to galactic peace but on an individual human to Vulcan level they don’t always get along. Sarek knows this must change and becomes an incredibly historic ambassador from Vulcan to Earth. He chooses to do what is to Vulcan’s the unthinkable marry a human woman named Amanda Greyson. And through genetic engineering they have an offspring named Spock. 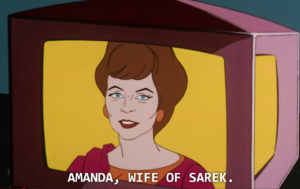 This family dynamic is why Nimoy’s letter to his fan from the beginning is a powerful companion piece to this episode. Spock is from two worlds but feels like he has to be twice as good. He has to succeed to show Vulcan’s can be something other than giant sticks in the mud and he has to be the most Vulcan to not be totally rejected by other Vulcans who often and heartbreakingly reject him. His faults no matter when or where they happen are attributed to his whole peoples. If he’s seen as flawed among Vulcans humanity is flawed. If he’s seen as just impossible to work with by humans Vulcans are impossible. His dad is the ambassador but Spock carries the mantel and the mission all the same. It is an unfair and an incredibly human dynamic that is universally inspirational.

However in this timeline Sarek and Amanda’s great leap of faith and love failed. Spock died at age seven. The relationship died shortly after that and in a final act of cruel fate Amanda Greyson died in a senseless shuttle crash immediately following his parents divorce.

They consult their record of recent Vulcan history and find that Spock dies during the Khas-Wan. A traditional survival test. Spock remembers it well through his own memory. Its the day his mysterious cousin who he never saw before or after saved his life mysteriously. Kirk and Spock don’t need a mind meld to be on the same page here they know it’s gotta be Spock.

I should mention. Vulcans have such strict tradition and such massive cultural systems of self control because their history prior to their modern culture is one of incredible violence, conflict, and domination. Vulcans are contact telepaths, at touch they can feel the others feelings and read the others mind. Primitive Vulcan’s weaponized their innate abilities and used it as a mind shattering weapon. All Vulcans believe or suspect that without their strict system of self control and discipline with all the mediation and traditional rites that little by little selfish action by selfish action that they would as a people regress into that chaos again.

Spock gets together an outfit that would blend in with Vulcan a few decades ago and we learn that the Enterprise has a wardrobe department?? Who knew!

Thelin puts it together that Spock doing this would mean his whole life’s trajectory would change. And Andorians and Vulcans have a history of racial resentment but in an incredibly touching speech Thelin talks about how much he and his people value family, and that he hopes Spock can save his mother. When Thelin does the vulcan salute to Spock I honest to goodness tear up a bit every time. 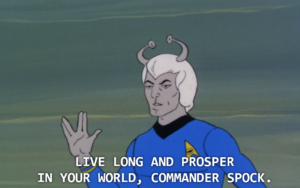 With no time to waste Spock gets his costume and goes right to the past–to his own past on Vulcan in the city of ShiKahr. 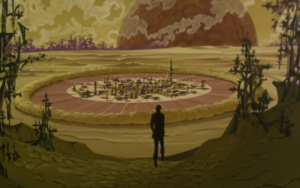 ShiKahr is beautiful. I love this city and I am so glad we see it in the animated series. Another example of this medium being better for realizing Roddenberry’s vision at this time and with this budget. We get to enjoy this splendor for all of two seconds however before we hear some young Vulcan bullies shouting at a poor young Spock. Making him feel that he doesn’t belong anywhere. As always with Spock the emotional core of him is his mother. When they insult Spock’s human mother young Spock attacks.

Shockingly not only is our Spock watching this, reliving his difficult past but so is Spock’s dad, Sarek. The one who initially had the vision that humanity and Vulcankind could become closer. Sarek says it is very regrettable that Spock showed emotion. Weakness. He calls his behavior regrettable. He apologizes that it has to be seen at all. To Sarek he is speaking to a complete stranger. Let that sink in enough, young Spock is 7 years old is under constant threat of physical and psychological abuse by his peers and is thought of as an overly emotional thing of embarrassment in public by Sarek. Not an easy life.

Spock identifies himself as a relative and is immediately welcomed into his childhood home. He speaks to Amanda Greyson and has the loaded line about the incredibly strict upbringing of Sarek: “It is difficult for a father to bear less than perfection in his son”.

Young Spock choses to go early to his KhasWan and his giant saber tooth bear of a pet named  I-Chaya follows. Older Spock narrates, remembering he had so much to prove to himself.

In the desert a monster immediately attacks and I-Chaya and older Spock intervene save the life of young Spock. 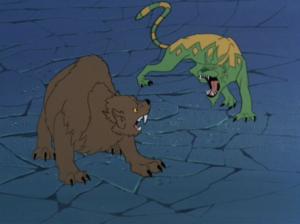 Young Spock is surprised to see the person he believes to be his cousin at first but soon Spock is able to give his younger self something he desperately needs, the feeling of being accepted and understood. Finally he able to help young Spock not be alone in the universe.

I-Chya is poisoned. He is not doing well. Spock quickly lets the audience member know that this wasn’t supposed to happen. Both Spocks are faced with losing a beloved pet to whom they owe their life(s). Young Spock chooses to go get help even though it is a risky journey telling Spock that it is his responsibility alone.

With only a few microaggressions and only one or two instances of outright racism that mar Spock’s life is able to get a healer to help. As the healer works I-Chya’s outlook becomes increasingly grim. Spock advises young Spock that a Vulcan would face this loss without tears and says: “Loss of life is to be mourned but only if the life was wasted”. I’m not crying. YOU’RE crying. Shut up.

I-Chya doesn’t make it. Spock is able to return and reports to Kirk that things were to be corrected with only the loss of a pet. Kirk says: “a pet? That wouldn’t mean much to the course of time”. “It might. To some.” Spock says.

This is an important episode of Star Trek. For so many reasons. But most importantly for the reasons articulated in the letter Leonard Nimoy responded to about someone who was from two worlds who felt they belonged in neither. That’s the best of what Trek is, its a world where we work hard to make society for everyone where we are better where we are more for our differences never less. And its a world where giant saber tooth bear things make great pets and always have your back.