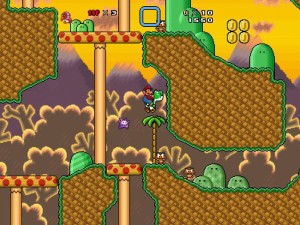 Ask a Mario fan to pick their favorite mario game and most will choose either Super Mario Bros 3 or Super Mario World. Rightly so, as I would argue that they are favorites because they set a definitive set of rules for how Mario’s world works and then design those levels in a way that play with those rules in unexpected ways. They encourage you to discover and explore but don’t hold your hand. Then comes New Super Mario Bros all high and mighty like your new dad. In between puffs of his nostalgia cigarette, he claims to know what’s best for you. But he doesn’t get you. He doesn’t understand what made your relationship with old Mario so special. Super Mario Bros X does.

New Super Mario Bros X is the 2009 child of Andrew “Redigit” Spinks. You may know him as the man behind the 2011 hit Terraria. SMBX is best described as a Super Mario Bros engine, taking the best bits of 8 and 16 bit era Mario and piecing it together in a sandbox for users to play with. It mostly borrows Super Mario Bros 3 physics, including power ups such as the leaf and tanooki suit, but also includes staples of other games such as pulling vegetables out of the ground and riding Yoshi. The included campaign, “The Invasion X”, takes full advantage of all these features in it’s imaginative 50 level span that had me fighting Wart one minute, piloting a bomber against Bowser’s forces the next, and taking down Mother Brain (yes, Mother Brain) shortly thereafter.

That would be enough to make an amazing and noteworthy game by itself, but SMBX doesn’t stop there. It includes a massive fully featured level editor, allowing players to create entire games right down to map screens and custom graphics. And there are enough user created games scattered across the internet to keep you busy for months. Hell, they’ll keep two of you busy if you play simultaneous multiplayer which dynamically splits the screen when players get separated. SMBX is seriously too beautiful to live.

That’s probably why Nintendo killed it. In 2011, it was slapped with a cease and desist. Rightfully so, as it infringed on roughly a million billion copyrights, but at least in my case, it serves as the best example of everything Nintendo has been doing wrong for the last ten years or so. Whereas SMBX is a celebration of a bygone era in Nintendo’s history, the New Super Mario Bros franchise comes across as much more of a checklist. All the pieces are there, but none of the love. The way I see it, while Andrew Spinks didn’t have the rights to make SMBX, Nintendo had no right not to make it.