When I was born, my great grandmother put a black fist bracelet around my wrist to protect me from evil spirits. And I was six, the first time my grandmother called me a child of Shango. I grew up knowing about the Orishas, connecting their qualities to those of Catholic saints. I knew the facts about Yoruba and there was a time I could easily recall which Orishas were renamed to which saints. But this novella made me feel the beat of a heart of an enslaved people who kept their culture, keeping themselves in a strange land that fought to strip them of everything.

“Oya remembers it all too well. It wasn’t just the Frenchies that got swept away that day. It was her people too. Her people who had brought her with them in the belly of slave ships. Who had sung her songs and made her offerings in this strange new land, calling her by new names and mixing her up with new gods.”

Though there are many wondrous themes in The Black God’s Drums by P. Djèlí Clark, the one that rang most loudly with me was freedom. This alternate New Orleans is free, but the Union and Confederacy still exist in contention, and some free citizens are still being captured and sold into the Confederate states. Jacqueline, aka Creeper, is an orphaned girl who lives pillar to post in this new New Orleans and comes across information about a weapon called “The Black God’s Drums.” She decides to take her information to the captain of the Midnight Robber, Anne Marie Augustine, in an attempt to join the woman’s airship crew to see the world. The mission to retrieve The Black God’s Drums isn’t as clear cut as the pair initially think and they must reveal secrets to one another not only to save their beloved city of New Orleans from the weapon that threatens but themselves. 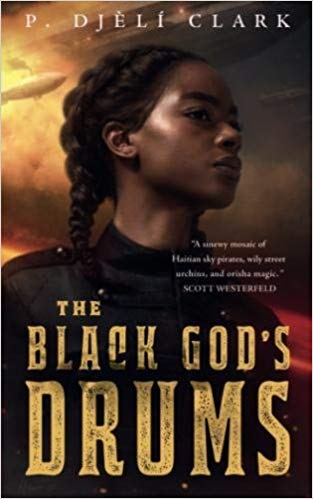 Anne Marie left her home to explore, telling Creeper, “Trinidad nice. Real nice. But it not big enough to hold me. Whole world is my island.” Even Creeper herself prefers to be free running the streets instead of in school or a convent with other girls her age. With slavery existing in this reality, freedom is a must. But the author doesn’t stop there. It would be easy for Clark to merely focus on physical slavery and freedom but he delves deep into the human subconscious and touches on personal freedom, the act of being true to oneself. Though Captain Augustine is always moving and seeing the world, she’s still weighted down by ignoring her truest nature. Creeper comments on how the captain is always sour looking because she holds back Oshun, instead of embracing the divinity.

Clark focuses not only divinity but feminine divinity.The reader gets to spend a lot of time with Creeper and Oya (Yoruba Orisha of the winds, tempests and change). Then when Creeper meets Captain Augustine, the reader is introduced to Oshun (Yoruba Orisha of the waters, love and fertility). Shango (Yoruba Orisha of lightning, thunder and fire) is mentioned throughout, but the main focus is on these feminine deities. The characters are fully formed in the barely 100 page novella. The Orishas add a depth to the characters without stealing their autonomy. There’s even a passage where Clark negates any notation these women are subjects of their divinities.

It’s my turn to frown up at the woman. “You know that’s not how it works.”

The author provides loads of backstory for Creeper and Anne Marie and how they are connected on the physical and spiritual plane. I enjoyed seeing mentorship between generations in this novel. It fosters the community and collectivity often experienced in the African Diaspora.

The plot progresses swiftly due to the length, but the prose makes sure the reader absorbs the soul of the narrative. The first words the reader comes in contact with set the entire tone:

To those who survived the crossing, and who carried their Black gods with them.

I felt those words. Paused. Teared. Thought about the fact that I’ve visited the plantation my great great great grandmother was a slave on. Those first words broke open my chest and mind to a past I’ve always known and accepted but hadn’t really embraced. I found myself remembering being a little girl getting my hair braided as my mother told me about my grandmother’s cakes and candles for Santa Barbara. Wrapping me in red cloth or buying me red clothes because I was a child of Shango. Even when I was recently sitting with them at the table discussing this very book and upcoming review, making a comment and my mother saying, “Look, you’re wearing red shorts as we talk about this.”

Though this narrative takes place in a fictional version of New Orleans during the Civil War, Clark genuinely captures the spirit of the African Diaspora in these pages. Through the eyes of a girl seeking adventure and to see more, we remember being young and desiring more not realizing that everything we ever wanted had already been laid at our feet by those who came before. This is a story of freedom, of fighting to get and keep it. Sometimes we forget who we are but “The Black God’s Drums” is a reminder that what we’ve been through shapes us but it’s us who make ourselves.