Last year about this time there was a spate of Old West fantasy up for grabs, and this year we get the sequels. Cold Eye is the second in the Devil’s West trilogy, which features a version of the West untouched by white imperial expansion. Instead, there’s the Devil, a mysterious figure who sits like a spider in his saloon, forever dealing cards and making uncomfortable bargains. His greatest bargain is with the territory itself, made through a diverse array of tribal elders, and it gives him both the authority and the responsibility to protect the land.

But the Devil–the boss–isn’t omnipresent, and he needs his two good Hands, the Right and the Left, to be his lieutenants. Isobel was newly christened the Left in the previous volume, and it’s her task to go about the vast territory and defend it from inside and from out. With her is her mentor Gabriel, a seasoned traveler who has traveled as much outside the territory as in it, and gives Isobel a wary dose of perspective as well as some know-how. 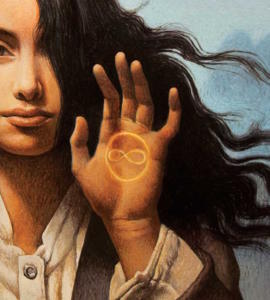 Isobel spends a great deal of time reminding herself–and us–that she is the Left Hand, the Cold Eye, the knife in the dark, the last word…etc. It’s not that these descriptors aren’t cool, but they would be a lot cooler if not worn down and in by repetition. Then too, there’s the old adage to show, not tell, and these phrases, while catchy, aren’t exactly expository. If you have to tell us that someone ought to be ruthless, it doesn’t bode well for their actual ruthlessness.

Fortunately for The Cold Eye, this isn’t supposed to be about a seasoned veteran. Isobel may have had her first adventure in Silver on the Road, but she’s still green. She struggles with what it means to be “the knife in the dark” both in a literal sense (what does she even need to do?) and a more metaphysical one (can she reconcile herself to such coldness? Does she even have a choice?). I like Isobel, and I trust her to make both good and interesting decisions, which speaks well to Gilman’s powers of characterization. There’s some great internal conflict here to drive the story.

Nor is the external motivation lacking. Early on, Isobel finds a herd of slaughtered and discarded buffalo, a desecration so severe that the land itself is uneasy. More unholiness follows, with the spirits angry and the land desperate to contain and isolate them, like they’re a sickness that can spread. There’s also the matter of a mysterious letter for Gabriel that nags the storyline, threatening to spill even more problems into the territory Isobel is supposed to be safeguarding. Mistrust begins to form, and many of the basic facts of their world become suspect.

This is drama and dire consequence enough for any book; the problem comes when we are reminded repeatedly about the horror, the horror, the horror. Gilman does dialogue and description quite well, and her mysteries are well-crafted: there’s plenty of tension inherent to the scenes without such a heavy hand underlining the Massive Consequences. What she needs is some humor or some mundane intrusions to break the supernatural tension that builds and builds within the mysteries the characters are trying to unravel.

The magic system is no help here, either. I always appreciate when magic systems rely on feel and instinct (don’t get me wrong, I love Brandon Sanderson, but there really only needs to be one of him)–provided that those feelings and instincts are comprehensible and produce intuitive results. Internal logic, in other words. Fairy tales and myths survive because there is a basic internal logic we can all agree upon. Here, there is almost consistency, but the magic is too much behind the scenes, too mysteriously tied to the devil and his unknown bargains. The reveal at the end would have been more exciting if we had had any inkling whatsoever that the–mythological creature? magical creation? …thing?–Isobel turns into is a possibility in the beginning. Instead the reveal comes out of nowhere, a solution like a desperate grab at an ending after the author exhausted herself and her characters into a corner. It’s unsatisfying even if it is a cool idea, in part because we have no warning and in part because the magic, never the most straightforward in this universe, becomes so maddeningly convenient.

Overall this book is a lesser companion to its predecessor, but given that it’s a trilogy the series might right itself in the end. The world is too genuinely fascinating to let go of, and there are too many big questions (what is Isobel now? What is the devil? Can the territory survive?) yet to be answered. The Cold Eye isn’t perfect, but it is enough to keep me going for the third book.