Ancient Greeks really liked snakes. So did most cultures of the Mediterranean and Ancient Near Eastern world; it was only later that snakes got a devilish reputation. Living their lives hugged so closely to the earth, they were thought to have deep wisdom, and because they shed their skin, they were symbols of longevity and eternal life.

But even though we look back on Greek mythology as if it were a unified canon upon which everyone roughly agreed, the reality is much less coherent. There are also stories of Apollo heroically killing a giant snake, and of Medusa, a monster with snake for hair who had to be defeated by combined mortal and divine intervention. There wasn’t just one symbolic valence for serpents, or for people associated with them.

Peternelle van Arsdale leans into the nuance of symbolism and the slippery nature of evil with her sophomore book The Cold Is in Her Bones. Her tale of demon curses and bitter vengeance is powerful and subtle, and the world she creates is thoroughly real. Cultures of repression and silence seem to be a central motif for her, as are women who challenge the status quo with hearts and minds instead of violence. 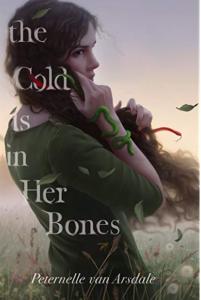 The story is loosely inspired by the Medusa myth—very loosely. As a Greek mythology pedant, I have to point out that The Cold Is in Her Bones is more accurately a story about women with snakes growing out of their heads, not actually a Medusa retelling or reimagining. Too many elements of the classic myth are missing. Also, to be clear, Medusa is the name of a single woman, not a term for women-with-snake-hair. “Gorgon” doesn’t work either, since it’s not clear that the gorgons all had snake hair. This has been a Greek Myth PSA. We now resume your regularly scheduled review.

Milla is the sheltered daughter of homesteaders who has never been off the bounds of her family’s property. Her stern mother and cold father will tell her nothing about the wider world, but every day they lay down lines of salt by every window and door to make sure demons don’t get in. Her brother is a warmer, happier presence, but even he treats Milla with cheerful contempt. It’s not until Iris arrives, a girl from the nearby village, that Milla realizes how much she’s been missing. Iris has even more reason to fear demons, though, and soon it’s clear why. The girls of the village, and maybe Milla too, are subject to a curse that turns some of them monstrous. But Milla is less afraid of demons than she is of losing Iris. And so she sets off to find the demon and save her friend, and maybe also herself.

The idea of monsters as metaphors for puberty may be somewhat apt, but it’s also overdone, and the kind of thing that is mostly written by adults who don’t remember being young. It seemed at first that this novel might be headed that way, but fortunately it pulled away from such a simple premise. Actually, it pulled away from any easy comparisons. This book never went where I expected, and more excitingly, it always went somewhere better than I expected.

That’s probably because van Arsdale is unafraid of complexity. Her stories may have straightforward themes—vengeance, forgiveness, kindness, tolerance—but she doesn’t mistake straightforwardness for simplicity. This is especially true of her villains. In both of her books now, the villains are never quite whom you expect, and never static forces of evil. They are as nuanced as the heroines, and often as traumatized, if not more so. Van Arsdale has profound compassion for anyone else perpetrating or suffering from evil, since they are often one and the same. And in exploring these enduring legacies of trauma and grief, van Arsdale and her characters find the thorny, narrow paths to genuine healing.

Among her antagonists, it’s often concepts that are the enemy more than people. At one point, there is a literal personification of Vengeance, but even it is treated more as a disease to cure than a person to defeat. Milla doesn’t need a sword to fight a monster; she needs knowledge and bravery to minster to it and heal it.

There will always be a place in SFF for swords and sorcery, but I’m always pleased to read about characters whose talents aren’t steeped in the violence they are usually (ironically) trying to prevent. Moreover, this book is an antidote to a lot of the overstuffed epics I’ve seen lately. Some books need to be long. Many do not. This one did not, and van Arsdale was smart enough to realize it. At only a little more than 250 pages, it’s devastatingly concise. There’s no word out of place and no scene that doesn’t deliver. It’s urgent but not rushed, and emotional without being overwrought. It’s the perfect little dagger to the heart, and the perfect little needle to sew you back up again.

The Cold Is in Her Bones will be released January 22.