A girl is missing. A student has fled from her rooms in the middle of the night after or with a young man. At first this means only—only!—that the Women’s College might be in jeopardy, a serious enough fate to force Vellitt Boe into action. But this is a world scaffolded by Lovecraft, and the reputation and potential disgrace of a college is hardly the worst the world has to offer.

The young man is a Dreamer, one who can affect Vellitt’s world but who can also leave it to wake up in his own. Vellitt’s student went with him, but there are reasons beyond reputation why she should not have gone. Mad gods and old ones are watching her and Vellitt both, stirring in their hallucinogenic sleep. Malicious forces are struggling to do their work. Vellitt Boe’s initially simple task of tracking her student across a moderate swath of countryside becomes a full-blown quest, spanning a far length of the Dreamlands, whose boundaries and landscape change at will and whose skies writhe with scintillating forms that the eye cannot follow for long. 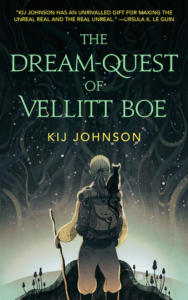 It’s rare to encounter a book so fully and intensely itself. Yes, it’s heavily drawn from The Dream-Quest of Unknown Kadath, but Kij Johnson has swallowed that book whole and completely digested it. It’s hers. And she’s made it into something greater.

Yes, Lovecraft fans, greater. Have your fits, gnash your teeth, call Harvard about getting that copy of the Necronomicon* to curse me. But take out Lovecraft’s racism, his xenophobia, his misogyny; remove his excessive reliance on a thesaurus composed only of five-syllable words; add in an actual understanding of psychology and dialogue; in short, subject the entire thing to the radical notion that horror and bigotry are not interchangeable and you have “The Dream-Quest of Vellitt Boe.”

Vellitt is an uncompromising heroine, wise with caution and pragmatism. She is older, a welcome change from all the teen saviors so popular these days, and full of experience both of the world and her own heart. Not easily swayed by old lovers, but motivated by deep compassion for her friends and fellow learners, her quest is driven not by typical Lovecraftian strangeness but by familiar goodness and kindness. Sure, she’s a badass, able to traverse the eternally dangerous dreamlands with nothing but a good pair of shoes and her wits, full of stories of daring escapes and far sights. But she’s no foolhardy hero, getting into scrapes for the sake of adventure or power. She’s just a wanderer, driven by curiosity, protected by her learning.

Traveling with Vellitt is a wonderful reminder of the classic quest-books, in which heroes like Belgarion and Frodo traveled all around their mythic globes with some bauble to provide the excuse for a tour. We see so much, learn so much about strange places. And there’s never much drive to make everything mean something. In some novels, everything comes together and ties up the narrative in a pretty bow. That’s all well and good (as long as it’s executed properly), but sometimes it’s nice to sink into a story in which the main character–though possessed of a legitimate motivation–runs afoul of beasts or lands that simply are. It makes the world so much bigger, knowing that not everything revolves around this single story.

This is part of the point Kij Johnson is trying to make about Lovecraft and Lovecraftian heroes as well. We do encounter Randolph Carter at one point, and he is (still) under the impression that the dream-world revolves around him. In this sense, Vellitt is the antithesis of all those quest narratives, in which the heroes usually end up as kings and legends. There’s no fame here, and no Valinor. Life very much goes on, but lucky us, we get to be part of it.

The Dream-Quest of Vellitt Boe comes out August 16.

*Widener Library, the central library for Harvard University, emphatically does not have a copy of the “original,” which is, obviously, fictitious. Every so often librarians there get a call from people who want to see it and won’t take no for an answer. Don’t be that person who annoys a librarian (whom, I might add, in your delusions, has access to the Necronomicon). You’d be much better off visiting the Andover Library, which serves Harvard Divinity School, to see the book bound in human skin (which is real). But they don’t really take it out much, so don’t be too keen or you’re in for some uncomfortable conversations with police.