I know, I know. Everyone’s done with apocalypse fiction. Now everyone wants hopepunk and high fantasy and escapism. Fine, fine. That’s valid. The world’s a tire fire and you need relief from the flames. Sometimes the last thing you think you need is another story of destruction and dismay.

But allow me to present The Girl in Red, by Christina Henry, as a counterpoint. This dark, occasionally gruesome tale was a strange relief to read.

Partially this is because Red is ordinary. Don’t get me wrong, Red is extraordinarily smart, resourceful. But she knows she’s not, as she puts it, a Chosen One. She won’t be leading a revolution or uncovering a conspiracy. She’s just a girl who wants to get to a safe place. When Katniss and her fellow teen saviors go to work, they can be inspiring, but also kind of exhausting. When Red does her best, it feels attainable, reasonable. Her situation and upbringing didn’t make her uniquely suited to saving the world, they just made her pretty good at camping. And camping, while useful, isn’t even enough to guarantee Red’s survival as she flees across the wilderness. 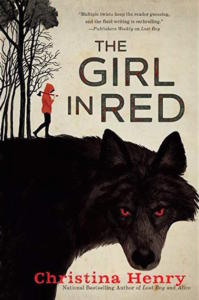 This is more of a hybrid of apocalypse/post-apocalyptic fiction, since Red’s story jumps between her experiencing the beginning of the pandemic and the current moment three months later, when things have well and truly gone to hell. Red starts out at home with her parents and her annoying older brother, all of whom should be at college (her parents are professors) except for the risk of contagion. They live in a small town, so the effects are muted at first.

But things get worse. And worse. And then they get so much worse even than that. By the time Red and her family realize they have to flee to an even more remote location—Red’s grandmother’s house—it might well be far too late.

You wouldn’t think things could go more wrong than a swift and deadly virus infecting the whole world, and then the remnants of that world turning on each other like starving dogs, but you would be wrong. But the details of that wrongness are scattered at first, and Red had very little time or energy to contemplate them as she focuses on survival. How can she investigate bodies that are suspiciously stuffed on shelves—and not in beds or cars like the rest of the mass deceased—when she’s fleeing both the army and several makeshift militias? How can she waste time guessing what strange, sinuous tracks might mean when winter is looming and food is running low? All she can do is take refuge in her beloved horror movies and (as she puts it) “genre fiction,” and hope that the survival lessons aren’t specific to zombie or alien attacks.

It’s always nice to see a character in a modern setting who actually engages with the modern world. Too often authors seem to fear acknowledging that their work comes from somewhere, that their book didn’t arise wholly original from the primordial soup. Red’s consistent references to 28 Days Later, Alien, and more horror films actually make things more realistic, since anyone would look to popular fiction if it suddenly became terrifyingly relevant. 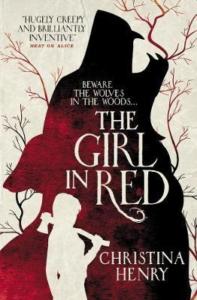 The contradiction in Red’s reliance on disaster stories is that they can inhibit her survival even as they prepare her for every eventuality. Red’s caution bleeds into paranoia, her fear of splitting the group risks alienating her traveling companion, and her strategizing can become so elaborate she forgets to take actual action. It creates good character tension, and good narrative tension as well. Henry plays with our expectations by sometimes letting the tropes be tropes, and sometimes giving them a horrible little twist.

Henry is also up there with Ryu Murakami (see especially In the Miso Soup) in her ability to portray sudden and shocking violence. The violence is never out of place or excessive, and it’s never meant to titillate. It’s exactly as horrible as it needs to be to real, and no one glories in it. That’s because Henry never looks away from what’s ugly. Sometimes that ugliness is in her characters, and she doesn’t spare them. More often, it’s in the world around them, and she doesn’t spare her characters that, either. Red knows what all women know, what all differently-abled people know, what all people of color know: the world is not a nice place. It might have nice things. It might even have some nice people. But there are wolves, and they want to eat you up.

Sure, that doesn’t sound too reassuring. But there’s relief there, too. And I’m not talking about the catharsis of watching things fall apart. There’s a real relief to be found in someone telling you that you’re not crazy, that things really are bad. Equally relieving is the reassurance that there are things you can do. Oh, sure, this book in particular suggests things like “make sure you have waterproof boots” or even “make sure you know of a place off the grid you could live for a while,” but I’m talking about self-reliance and questioning authority. It’s great to see a book that treats a suspicious, surly woman as a hero. Red trusts her gut no matter if it makes her seem unfriendly or insane. That suspicion keeps her alive time after time. It’s not just hopeful, it’s hope in action.