I wanted to like this book. When I saw the plot, I thought of Tamora Pierce and her magical, powerful girl characters. The Girl King could be a classic but with Asian identity and modern themes, something both nostalgic and fresh.

What it is instead is a diversion. It’s a fun Mission: Impossible or James Bond read, with lots of fights and high world-ending drama, and because it’s SFF, there’s also lots of magic and shapeshifting and prophecy. Little of this goes below the surface, however. The plot rushes by too quickly for us to get much depth, since every other chapter has throats being slit and crossbow bolts whizzing by. Mimi Yu has given us a standard, almost 90s, High Fantasy, and I had to quickly adjust my expectations. 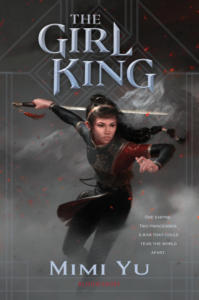 I love some good action, and the plot is a reasonable one. The emperor has only two daughters, and the eldest, Lu, means to rule as if she were a son. But through politics and treachery, her (male) cousin Set takes the throne instead. Lu is forced to go on the run, leaving behind everything–including her young, innocent sister Minyi. Lu knows the arts of war and swordfighting; Min may have the gifts of magic. And far to the north, orphan Nokhai may have the key to the shapeshifting gifts of his people.

Danger and romance! Politics and magic! Yu has the bones of a good idea, but she stumbles on the execution. There is a point at which a powerful sorcerer—previously able to hold off dozens of men by himself—is brought before the wicked usurper Set. But instead of killing him, the sorcerer just allows himself to be imprisoned. This is the flimsiest of plot armor, and for the villain no less. Sure, maybe characters are playing deep games of politics and magic, but I have little confidence that there is a plan grand enough to defy basic logic. After all, the book is littered with these instances of plot-induced bad decisions. Lu Confronted with the indisputable reality of magic, Minyi nonetheless wastes her time—and all of ours—pretending that certain events were “just dreams.” Entering into negotiations with a potential ally, Lu seems unable to make basic inferences so that there can be exposition. It’s a game of catch with the idiot ball and it deflated most of the tension.

The romance is simultaneously predictable and uncomfortable. While it’s no surprise that two characters thrown together and forced to endure a high-stakes quest will fall for each other, these two are on opposite sides not just of a war, but of a genocide. I would have liked to at least see a more thoughtful examination of this attraction. I also would have appreciated a more deliberate approach to the villain’s romance subplot. The character who falls for him may be sheltered and browbeaten, but her infatuation is so naive that she seemed stupid rather than sympathetic. It is also clearly an abusive relationship, and I would have like a more nuanced, deliberate exploration of the topic.

Ultimately these objections to the romance come from a deeper objection to the characters. While they are reasonable as archetypes—the bold princess, the magical neophyte, the boy with a Dark Past—they never quite live and breathe as individuals. It’s hard to connect to them because the emotional core of the story is so muddled. Unexpected reunions and sudden goodbyes are given no space to breathe with the relentless forward motion of the plot. There could be plenty of grit and power in those moments, too, which is all the more disappointing.

The writing is adequate to the story, but nothing to revel in, which is a large part of why the book (especially the first half) should have been far more concise. It’s a hundred pages before we get to the crux of the matter promised by the cover blurb: Lu has to run away before she can take her crown. It’s not that these hundred-plus pages are wasted, just that they end up feeling like a long preamble. But I’m sure the series will be long enough to make it proportional. This tendency toward increasingly lengthy books and series—thanks, G. R. R. Martin and J. K. Rowling—is popular nowadays, but it isn’t always warranted. Yu needed a harsher editor to tighten up the story and the prose both, but the trend has instead given her a license to sprawl.

That being said, it’s a fast read. It’s pulp, and once I accepted that, it was a decent romp through some big battles. While regular literature has always had its beach reads, SFF has usually had what I think of as fireside reads, heftier, more plot-heavy books you curl up with once school or work is done and you can enjoy without bending your brain too much. The Girl King will never be a classic, but it’s a cozy evening or two.

The Girl King comes out January 8. If you prefer some brain-bending, better options for YA would be Girls of Paper and Fire and Forest of a Thousand Lanterns. Branching into adult SFF will get you Under Heaven, The Poppy War, and The Tiger’s Daughter.