River Page wants to be a Grace. Within a few weeks of moving to a new town on the edge of the sea, it’s all she wants and all she can think about. She plans her days around them and daydreams about what it might be like, to be accepted by the mystical, magical children of the most powerful family in town.

Unfortunately for her, the three Grace siblings—Summer, Thalia, and Fenrin—don’t have any idea who she is. Well, maybe they know that she’s the new girl, the quiet girl, the one who escapes to the library to read during lunch. But they don’t know how much she wants to belong to them, to participate in their world. Because the Graces are magic. Rumors are everywhere about the mishaps that befall their enemies and the blessings they can bring to their friends. The beautiful, bewitching Graces. The beautiful, bewitching Fenrin in particular, whom River has been in love with from afar almost since she first saw him. 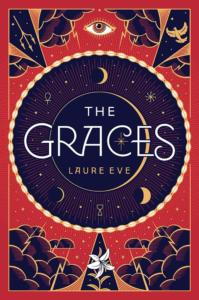 Slowly, from a combination of devotion, calculation, and a little of her own mysterious luck, River begins to ingratiate herself with the siblings. She hangs out with Summer, drinking homebrewed wine and watching horror movies. And casting spells. Spells that may or may not work, spells that have as much to do with faith as they do with ritual, spells that even the Graces tout a true one minute and hoaxes the next. But River knows its true. It must be true. The Graces are magic, but they’re under a curse. And River’s going to be the one who breaks it.

I really don’t like River. She’s both too eager and too secretive. Friendship is a calculation to her, about what she can get out of it more than about its intrinsic worth. Power motivates her more than love. Much ink has been spilled about the relative likability of female characters and what that says about our expectations for women, but for me it’s much more personal (and thus, not really a criticism so much as a confession). I don’t like what she reflects about me, the reader. Many of us nerds were outcasts growing up, or at least felt like we were outside looking in. And doubtless many of us wanted the magic powers we read about and played in video games, powers that would let us get what we wanted and yet retain the image we had of ourselves as both virtuous and benevolent. After all, the good guys are the ones with powers. The good guys do things for the right reasons, and everything always turns out well in the end.

Are the Graces really good? Is River? The answer keeps shifting with every new fact we learn about the Grace family and with every spell they cast. But are they even really witches? Or are they just the rich and beautiful kind of powerful, no magic beyond charisma? River wants so desperately to believe that they have Powers with a capital P, not just the cultural inheritance of witchcraft the way some people inherit being Catholic or Jewish. It’s this burning hope that really got to me in the end. It’s incandescent and furious, both a pleasure and a creeping horror to read. Hope like that is a wildfire, taking everything–even trouble–for fuel and burning everyone in the end.

Yet I also have a great pity—maybe even compassion—for River. She’s alone. She’s neglected. There’s nothing romantic about her poverty or exciting about the freedom her absent mother gives her. Wanting friends to fill the huge voids in her life isn’t selfish; it’s just the way that she goes about it that’s suspect. She’s compelling, which ultimately is more important than likability.

Likability also isn’t equivalent to readability, and this book was infinitely readable. For the last third of it, I started reading the moment I woke up, and when I could no longer ignore the need for breakfast, I walked to a pastry shop with my nose to the screen the entire time, there and back. I did not even eat my cookie until I was done. That’s the kind of urgency this book contains. It’s a psychological thriller even more than it is a fantasy novel, an it’ll put a spell on you, too.

The Graces by Laure Eve comes out September 6.