Perhaps no other book has influenced my thinking about freedom of expression and the power of art as much as The Merro Tree. Yet when I tell people that, I get blank stares.  It’s positively criminal that this book isn’t up there with Fahrenheit 451.

Then again, Fahrenheit 451 is the kind of book that you can teach in schools. Its wonderfully furious radicalism is cloaked by a generic future-government, and its metaphors are clear and concise. It also contains little that is objectionable to PTAs, since there is no sex, no nudity, and no homosexuality (god forbid teenagers contend with that–we’ll stick to book burning, which was only a tool of the Nazis, thank you very much), and the only women in it are a manic pixie dream girl (who dies) and a one-dimensional ditz. 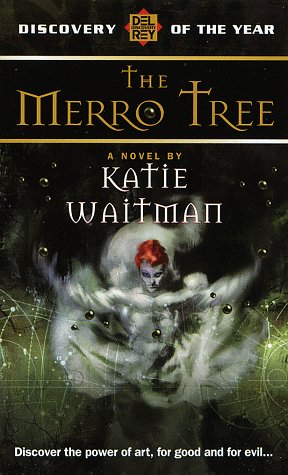 Mikk and his lover have a deeply moving romance that should be inspiring fanfic across tumblr, but alas, this out-of-print book probably isn’t on the radar for the teens (and adults) of America, since it was published in 1997. Fortunately, the internet is the remedy, since used copies abound. Get thee to a 3rd party seller, denizens of the web, and get writing that slash.

This book should be a classic for its take on gender and sexuality alone, but its fearlessness in exploring art, the joys and limits of multiculturalism, the possibilities of redemption, and evils of censorship of all kinds are perhaps even more affecting. Yet it is so deft in its passions that it never stoops to ranting; this is a glorious narrative that contains political statements, not an extended metaphor dragging its narrative along for the ride. Above all, Mikk is an amazing character who goes from a neglected, abused child to a super-star performer who uses his art to inspire greater understanding between diverse people, while never getting schmaltzy or saccharine.

It’s also not afraid of complexity. Mikk contends with accusations of cultural appropriation, and even goes so far as to deny the last wishes of an entire race, who have explicitly stated that they do not want their art, specifically a transcendent form of dance, to live on. He performs the dance, and by so doing, comes up against a pan-galactic regulatory board for the arts, sort of like the FCC meets the SAG, which decides who counts as an artist and what they can do. His defiance is a profound statement on the ownership of art and culture, and what art is actually supposed to do.

On a meta-textual level, this is what The Merro Tree does. It’s not just beautiful, it makes the world a freer, more tolerant place, even if it’s just the small group of people who have read it. You should be one of them!