What I loved about The X-Files (while it was still airing; not the reboot garbage) was its commitment to showing all the weird little subcultures and sub-subcultures of American life. The media and the internet was already making America smaller, but The X-Files made it seem so big. Witches and monsters and aliens and mutants all fit in a country that seemed so familiar but also so exciting. Even the smallest, most mundane towns could hide secrets that could upend science and logic.

It’s that same spirit that infuses The Rust Maidens, an intimate portrait of Cleveland as a locus of Rust Belt decline. Gwendolyn Kiste has combined the generalized dread of a community in decay with the very particular horror of bodies—specifically female bodies—undergoing terrible transformation. It’s a potent mixture of slow and sudden horror, with a bit of the pure uncanny thrown in for good measure. 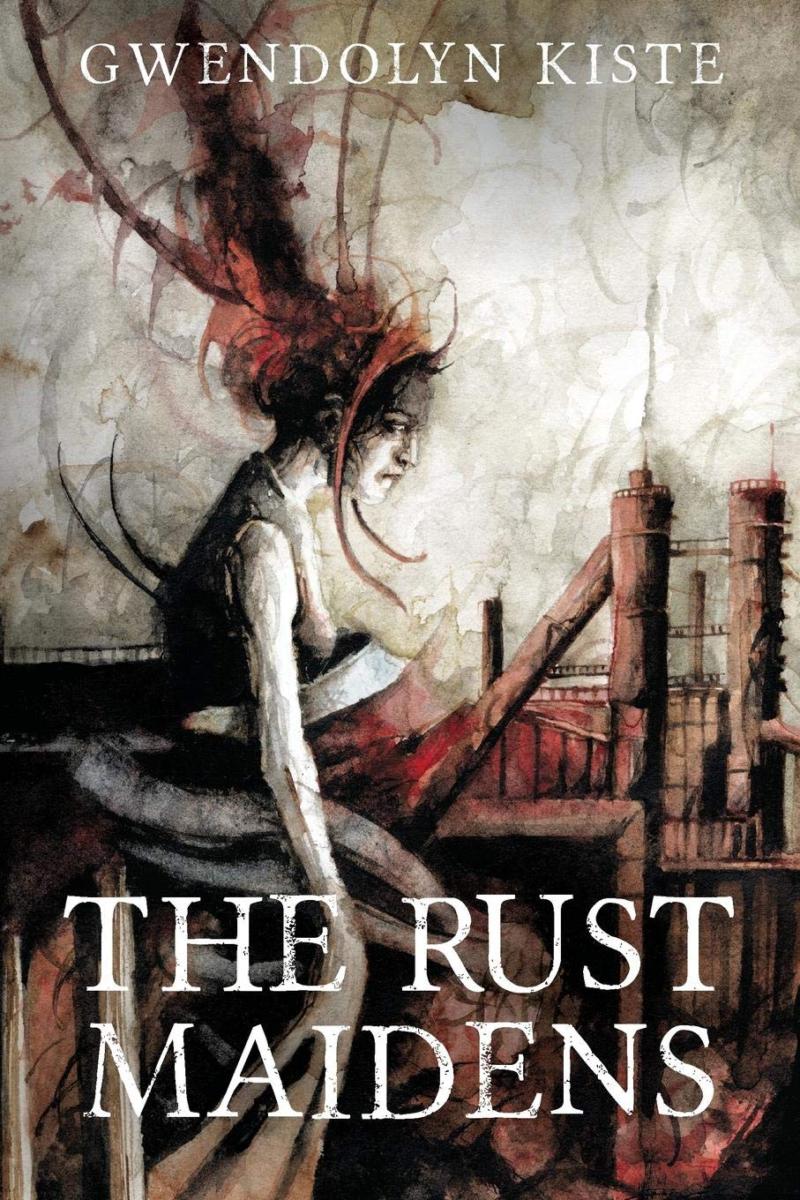 This book defies standard categories of horror, and I can think of no better description for it than Rustpunk. It has many of the elements of the other “punks”—Steampunk and Cyberpunk—like a focus on technology and social upheaval but is very much a product of its time and place. Cleveland in the 80s (and again in the modern day) seems like it ought to be mundane, but the looming smokestack and run-down homes make for an eerie and appropriate backdrop. At the center of them all is the local steel mill, increasingly obsolete but the central focus of the landscape and everyone in it.

The workers are contemplating yet another strike when the summer of 1980 rolls around, this time to prevent layoffs. The plant is in decline, which makes the locals all the more desperate to preserve what little they have left of the status quo. Troublemaker and oddball Phoebe hatess this tendency, which always subordinates wives to husbands and daughters to everyone.

However, even Phoebe isn’t prepared to accept the radical changes that overtake five local girls, changes that bring shame, suspicion, and eventually chaos to the insular community. One by one, girls begin to sicken. Scrapes appear on their flesh, but they bleed filthy water instead of blood, and their wounds reveal rust instead of bone. Frightened parents hide them away, and by the time their metamorphosis is obvious, it’s obviously too late. With nails of broken glass and skin like burnished metal, they are living embodiments of decay and neglect. And no one can help. Not the government, not the hospital, and certainly not the thrill-seekers egged on by a few sensational newspaper articles.

Phoebe wants to help more than anyone, but all she has is her high school diploma and a love for the maidens that is greater than any fear, even fear of contagion. She genuinely wants what’s best for them, which elevates her character even when she may not be making the best decisions. But what’s best for the maidens might not be best for Phoebe, or for the community. Whether that’s a burden she can bear is really what Phoebe must come to terms with, before the maidens and the whole town destroy one another.

The girls come from all walks of life, and are suffering from all kinds of disappointments. Linda, the first girl to catch the rust, is trapped in an abusive household, but Violet, daughter of the local doctor, and Helena, daughter of the town pastor, don’t seem to have any major issues. At first. But we gradually come to see that each girl nurtures deep dissatisfaction with their home and town. Neglected and thwarted, their transformation gives twisted expression to their unhappiness, gaining them the kind of attention not even sex, drugs, and unintended pregnancy can bring. It’s not an unexpected message, that misery and deprivation makes monsters, but Kiste still makes it powerful because of her attention to her setting and her characters.

I hope there will be more books that explore the Rust Belt and the specific culture of middle, manufacturing-based America, either before or after its decline. I particularly hope Kiste continues to lend her talents to this nascent sub-genre, since I think both it and she have enormous potential.