The Sea Dreams It Is The Sky reads like House of Leaves had an unholy demon baby with The Shadow of the Wind. In the best way. And if you don’t know what I’m talking about, then rest assured: it’s terrific, it’s horrific, and it’s smart as hell. Part Gothic horror and part cosmic horror combine with all political horror, the true stuff of nightmares. John Hornor Jacobs understands horror intimately, and knows just what to show and what to only suggest so that unease lingers even after fright wears off. After all, it’s the things you can’t see that scare you the most. 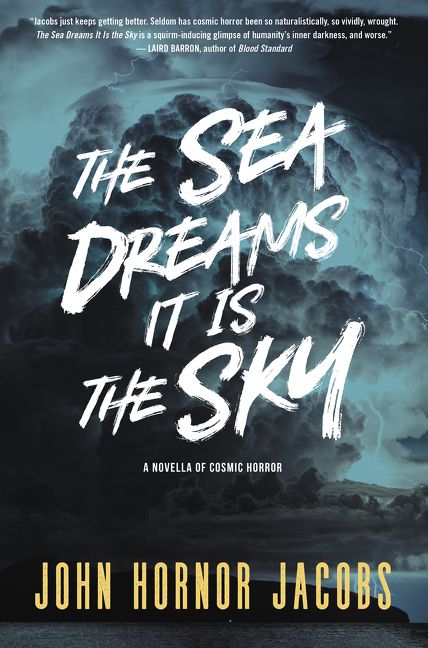 Ignorance is the bedrock of Lovecraftian fiction, a state so powerful and universal that none of his stories could begin without it. The vast, unthinking ignorance of both human beings and of multidimensional entities, mutually incurious and self-obsessed, makes life possible. Curiosity is where life breaks down, and knowledge ruins it entirely. But ignorance is not innocence; there is no great valor in ignorance, just dull, rutting survival. Ignorance is also the starting point for the two main characters in The Sea Dreams It Is The Sky. The two practice ignorance with all their might, since they have lost all innocence in the fall of their country.

Isabel is an exile in Spain, where she teaches literature and tries to ignore her past. But “the Eye,” the man who lingers at the same cafes she does, makes it difficult. Like her, he is obviously Mageran. Like her, he longs for their homeland but cannot return, since the junta despises poets and distrusts academics. They fall to talking, and then into a unique friendship built on the foundation of unspoken trauma.

But Avendaño, “the Eye,” is not content with silence. He was a poet, and his nature is to bear witness. Before he embarks on a foolhardy plan born from longing for a lost country and a lost lover, he shares cryptic hints with Isabel. Isabel, herself no stranger to longing, finds it impossible to ignore these hints. She delves deep into the bloody history of her country, and there finds something darker still: there is a book, provenance unknown, that contains recipes of blood and pain to draw the attention of something far more terrible than men or countries. Something beyond the stars.

As with Lovecraft Country, in which Matt Ruff takes on Lovecraft’s racism, The Sea Dreams It Is The Sky offers a nuanced response to Lovecraft’s xenophobia. Nightmares do erupt from foreign intrusion, but here, Americans are the foreigners, interfering in the made-up nation of Magera just as they did in so many other real nations. Here, in addition to propping up dictators and disappearing dissenters, a shadowy group is trying to reach a power beyond comprehension. It responds only to pain and misery, and so the Americans will give it what it wants.

America is the Lovecraftian horror here, at least as much as any non-Euclidian nightmare. Its involvement in shadowy power-brokering, the way it dispenses its power—in the form of guns and cash—to its underlings, and the indifference with which it treats both its worshipers and enemies are all reminiscent of some sprawling Cthulhu. The United States does not care about South America or Magera, and cannot be bothered to abate its profound ignorance of the places it intrudes upon. Indeed, this is a subtler part of the miseries it inflicts: the tortured, maimed, raped, and murdered do not register to the smiling, well-dressed representative observing the proceedings.

Pain is often the result of some horror or other, but Jacobs hones in on the fact that pain is itself a horror. It distorts time, crumples space, changes reality. It reduces all truths to base desire. Jacobs understands the way that pain is kind of entity unto itself, one that can be put off with various rituals of obedience and silence, but also one that can be turned to useful ends. Avendaño and Isabel learn this before the book is done that pain is sometimes the antidote to ignorance. Specifically, the pain of confronting terror and looking it straight in the eye.

It astonished me when I finished to see that this truly was a novella, only 127 pages. It felt so complete in both evocation of place and also in fullness of narrative that I could have easily believed it was twice as long. Jacobs is extraordinarily skilled at winnowing his prose to the absolute essentials, but not in a terse or perfunctory way. Other authors may cut back to the bone; this book feels more like getting at the marrow of something rich and terribly profound.