Before I begin reviewing the book, I must first review the title. At least enough to say: it sucks. It sucks! It sucks, it sucks, it sucks. Rather than intriguing me, it actively put me off picking this book up. I am sick to death of books with “the girl” or “the woman” or “the daughter” in the title, as if women are both interchangeable and primarily identified by their gender instead of their character. It’s a beaten-to-death marketing scheme and I wish publishers would just stop. The Girl with the Dragon Tattoo was ten years ago. The 538 is on to you. Let it go.

I’m not terribly fond of Victoriana either, not because the period isn’t intriguing, but because–like the title–it’s been overdone. Ten thousand corset-loving English majors decided that Steampunk was going to be a thing, and romanticized a period that was mired in slavery, colonialism, sexism, classism, and illness, making it all shiny. What’s wrong with alternate history, you ask? Nothing, but I have little patience for willful ignorance passing itself off as legitimate Fantasy.

All this frustration makes it seem like I don’t enjoy this book, which isn’t true. But between the cover and the title and the jacket blurb, its publisher isn’t doing it any favors. It seems tired before it begins, and that’s a huge obstacle for Goss to overcome with her first novel. And it’s a pity, because she’s done everything else right. She isn’t sugarcoating the period, and she has a firm grasp on the insights she wants to share about it. 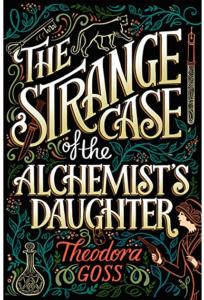 This is the Penny Dreadful of books, bringing together many of the most famous (and lurid) characters from Victorian writing* but with a decidedly feminine (and feminist) twist. Mary Jekell, daughter of the (in)famous doctor, begins our tale as a newly minted orphan. She is in the process of burying her mother when other orphans begin to appear, complicating her situation, which is complicated enough to begin with.

While it’s not particularly glamorous, I am struck by Mary’s primary motivation, that of money. She isn’t greedy or grandiose. She just wants enough to live, but there were few ways for a woman to make money in those time. It’s rare to see such a steady, reasonable goal persist throughout the narrative, and I quite like it. It adds a dimension of subtle realism to a narrative of the fantastic, and her constant rehearsing of her dwindling accounts gives us insight into Mary’s practical character. Practicality is often an overlooked virtue in successful mystery-solving.

The mystery is made less mysterious by, again, that wretched jacket cover. We have already had spoiled for us that Mary will meet the daughters of various characters, and Mary acquiring their acquaintances seems more like checking off items on a shopping list and less like finding genuine clues. There’s Catherine Moreau, Justine Frankenstein, Diana Hyde…and so on and so on. They are the daughters, by nature or nurture, of zealous men. Obsessed men, really, who thought more of science than their daughters’ well-being. Their children–their daughters, always and specifically–were their means to glory, and also their undoing.

Men, in this world, cannot bear to be monstrous. They are killed by their creations, by their misguided savior impulses, and by their desires to be accepted–even lauded.  But women have no choice, and make their individual peace. As the interjections demonstrate, they each have their own opinions on their natures and existence, and what ought to be done about it. Pious Justine refrains from eating meat, and Beatrice takes up her father’s science, while hot-tempered Diana hacks off her hair and runs around barefoot, sticking out her tongue at the world. With such a varied cast, there is no danger of setting up some kind of dull gender duality: complexity is Goss’s game, and she plays it well. Where does monstrosity begin? she asks. In the flesh? In the spirit? In words or deeds? In one’s position in society, or lack thereof? Well-bred English ladies are just as dangerous as servants and foreigners; the pious are just as deadly as the atheists.

There’s also no facile ending declaring that wicked men are the real monsters–these ladies have made some gray choices themselves. They have also endured under terrible circumstances, and a few have supernatural natures that have gone variously awry. The spectrum of villainy is set in contrast to monstrousness, and it’s the particulars of finding each character’s points of intersection is one of the great pleasures of the novel. That the women themselves are able to reflect on it is another.

The interjections not from a narrator but from the characters themselves is a clever innovation, one that I found both wry and refreshing. Instead of an epistolary novel it’s a a conversational one, with more than half a dozen voices chiming in to offer commentary on the prose. None of the voices–whose characters are gradually revealed–agree with the narrator or each other, which makes for a lively chaos. It’s charming, sort of how I might imagine early Bronte drafts might look. Instead of one man’s account, we have a chorus of voices, not declaring but disputing, demanding–and inviting you to do the same.

*and a little before: Frankenstein is from the Regency period (and Goss obviously knows that), but whatever, it works.