Sylvain Neuvel really doesn’t like conventional narrative formats. His debut trilogy, the Themis Files (Sleeping Giants, Waking Gods, and Only Human) was written entirely as “found” documents, everything from transcribed interrogations to diary entries. Now he’s back with a Tor.com novella, which is told in the form of a 25-question test.

But of course, even that would be too easy for Neuvel. There’s also someone administering the test who’s being tested himself—on his ability to administer the test. And of course, some data about the construction of the test, even with helpful statistics! 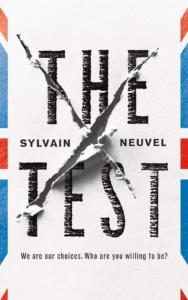 This would all be insufferable if Neuvel took himself too seriously, but he clearly takes such joy in playing with the format. He even finds ways to make dentist jokes! The whole story is a delight until—of course—it isn’t. Until it’s a grim commentary on immigration.

Idir Jalil has 25 questions to prove that he belongs in the UK and not back in Iran, where he and his family have been threatened and persecuted by the government. The test seems ludicrously unfair, with questions ranging from Richard III’s death to popular football slang, but it gets even worse when it’s interrupted by rude comments, spilled coffee, and then by even more dramatic evens. Idir just wants to finish writing his answers. But the answers he gives to his fellow test-takers may be more important than what he writes on his sheet, and the government of the UK, as ever, is watching everything he does.

The message is clear: for an immigrant, everything is a test. Get something wrong, even for the right reasons, even if cultural differences and not malice are the motivation, and you’re no longer a refugee. You’re an extremist, an undesirable. Get something right, and you only get a single point, not nearly enough to guarantee your safety, your freedom, or your right to belong.

The testing never stops, either. This is true for Idir, who may never recover from the unbearable choices he has to make, but it’s also true for Deep, who is the child of immigrants. Deep is one of several people administering the test to Idir, a junior member of the team who knows almost all the rules and is almost ready to qualify to be a fully-fledged tester. He wants this job badly, even though he has to hide his slight accent and worries even about eating an apple in front of his supervisor, who might be bothered by the crunching sound. Deep knows the test isn’t fair. He knows his own father wouldn’t have passed, even though his father is a peaceful, law-abiding citizen. But he also needs a job, and he thinks he can help other candidates pass. He’s also persuaded by the idea that these unwitting, coerced subjects can yield valuable data. His too-eager participation in a system that would have rejected him without a second thought is just as pointed a commentary as the test itself.

Neuvel’s multilayered story is a smart, sad, and extremely relevant little book. I doubt anyone who reads it could fail to sympathize with Idir, who is so much more than multiple choice answers and factoids. I hope it also makes clear the larger, systematic injustices that people like Idir must face. Immigrants, especially immigrants from minority racial, religious, or other populations, will always be under scrutiny so long as the majority thinks a single test—a test they create with all their biases implicit within it—is a reasonable measure of a life.