There was a moment when I finished this book in which all I could do was sit and stare at the last blank page. I was physically disturbed and awed into stillness.

“Holy shit,” I said, somewhat to my husband, mostly just to say it. “This book…”

I didn’t finish my sentence. I couldn’t.

It begins in media res, which seems to give away the whole plot before it’s even begun, showing Elka in a fierce battle with her former father. Can a father be former? Yes and no, says the book. Your parents are an indelible stain on your life. The things they do, the skills they teach you, all of it remains. But you choose whether to spread that stain. You choose whether to look at it or shove it out of sight.

Elka can see the faintest of tracks through the forest, and the slightest of movements through the trees. But some things she just can’t bear to look at. So really, the very beginning gives very little away. The story isn’t really about whether her adoptive father is a murderer, but whether Elka can bear to look at things and see them for what they are. Not just her father, but her companion Penelope, who could be Elka’s twin for all the secrets she keeps. At Lyon, the woman hunting justice—and Elka—without a shred of mercy. At a whole constellation of liars and wanderers and desperate people, all of whom have their own agendas but not all of whom are thoroughly bad. And most of all, Elka has to look at herself, and decide whether she herself is thoroughly bad, or whether she can stop her father’s stain from spreading to cover her whole being. 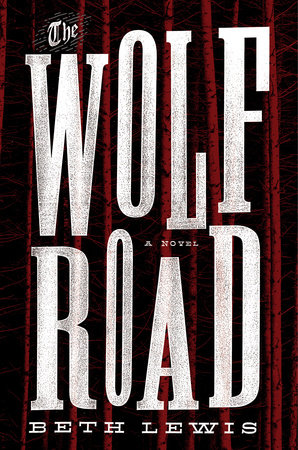 All this set in a terrible world, ruined by what Elka calls the Big Stupid. It’s darkly funny. The whole book is like that, full of little moments of humor or luck or grace that will make your mouth twist into something that never quite becomes a smile. It’s too grim for that, but it’s not McCarthy’s The Road. It’s not that bleak. It’s The Wolf Road, a more fantastical cousin of that modern classic, with bloody-minded preachers and good doctors, gold rushes and a real cast of characters and stories that rounds out the world and proves that it’s gone on in all its splendid squalor.

Elka’s narrative voice casts a fine layer of practicality over all the wretchedness and glitter of the new world, unimpressed by either the shambling heaps people have managed to assemble in imitation of a world long destroyed, or by her own prodigious skills. She survives; that’s what she is as well as what she does. Still, despite her straightforwardness, it’s incredible to watch her journey over the harsh terrain. This is Hatchet for grown-ups, if Hatchet were written by Stephen King living in the Canadian wilds instead of the Overlook Hotel.

The forest is its own character and its own voice, sprawling across the narrative like a rich green shadow. It’s dark, yes, but it’s the kind of darkness you can sink into without fear of getting so lost you never come out again. Especially with Elka as your guide. She’s a disciple of the forest, its priestess for all that it’s no god. It’s just a solid, true thing, a foundation from which she can start and a place she can return to in desperate need. It may be harsh, full of bears and wolves and the threat of hunger and thirst, but it doesn’t have the darkness of the towns. Elka can’t navigate that kind of darkness, the kind that springs from greed and malice and not survival. She can be naive, frustratingly so at times, getting herself into situations that require others to rescue her. But she does her fair share of rescuing, too, filling the book with dramatic escapes, fights, and even a murder or two.

Sure, it’s a page-turner, and some of you may come and leave this book with no more than that. All well and good, but the real drama is in Elka’s evolving psychology, a journey just as harrowing as the one she takes over land and water. And in the end, her confrontation with her erstwhile parent is so much more than it seems from those first pages, a more terrible and heart-wrenching confrontation with her demons than you or she could ever have guessed. One that I hope will leave you just as speechless and impressed and gut-punched as I was.