In honor of the release of This Cruel Design, Emily Suvada’s second book, I read This Mortal Coil, her debut and first installment the trilogy.

First let me say that Emily Suvada has some serious cojones and the prose to back it up, that’s for sure. Before fifty pages are up, there’s murder, kidnapping, multiple plagues that can end the human race, and cannibalism. Hot damn. This is a can’t-stop-won’t-stop Michael-Crichton-Meets-Mission-Impossible of a book. 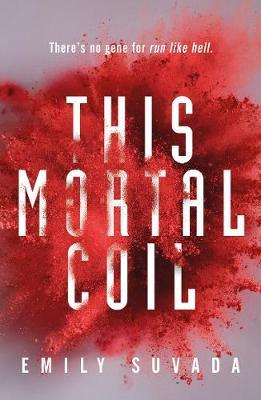 Our guide for this thrill ride is Catarina Agatta, daughter of genius researcher Lachlan Agatta. She learned coding and genehacking at his knee, but only before the Hydra plague. Then he was kidnapped by the corporation Cartaxus to “help” them fix the plague. Cat escaped, and has spent the last two years surviving in the Dakota wilderness, trying her best to be a thorn in Cartaxus’s side. But her not-so-peaceful existence is shattered once more when a super soldier comes looking for her. Can Cat be a genius in her own right, and solve the plague and the problem of Cartaxus at the same time?

Cat is an effective narrator, her voice blunt and uncompromising even when the subject matter is uncomfortable. She’s the consummate scientist, describing the realities of the post-plague world with compassionate detachment, helping readers to navigate a detail-heavy world. But she herself is a passionately committed person, and moves seamlessly from the crucial explanations to the drama of her own life. Suvada would make an excellent nonfiction writer, since her explanations are concise. But here in fiction she’s just as adept with action and dialogue.

The book is firmly ensconced in biotech, with the bulk of the narrative revolving around coding or otherwise manipulating cutting-edge computer interfaces. Still, I would have liked Suvada to continue the bio-horror she introduced so well with, you know, the rage-crazed devouring of other human beings, induced by a virus that makes people explode. After that kind of opener, nothing else feels quite as shocking or frightening.

It’s not meant to be too frightening, though. It’s meant to be an action thriller. Suvada has clearly watched a lot of movies and adapted the visual cues back into a written format: people’s levels of modification are clearly noted on their arms with glowing blue dots, and viruses or hacks make them glow orange. She also has a good ear for the kind of tech a corporation would produce (a yellow box that magnetically removes bullets is called a “golden retriever,” which is delightful), and generally the kind of world that would ensue after a global pandemic. Even the roads–which would not have been maintained–are given a glancing description as being full of potholes. It’s this eye for detail that really elevates the book.

The book also has some thoughtful examinations of the divide between safety and freedom, the needs of the many vs. the few, and the ethics of genetic manipulation in general. Suvada comes down on the side of freedom of genetic expression, whether that be blonde hair or wings and tails, but doesn’t allow the other side to become a straw man. Cat is tempted by the comforts of safety, and with good reason: her life has been a nightmare of fear and desperation, and in dire circumstances “freedom” is just another word for hardship. She has to make real, meaningful sacrifices for the ideals the book puts into play, which gives depth and texture to the narrative. 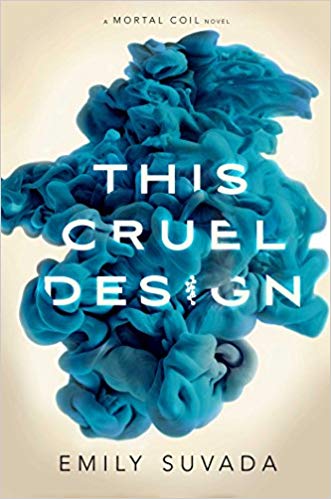 However, at its heart This Mortal Coil an action movie, not a thinkpiece. Barely a chapter goes by without an explosion or a fight to the death–or both. It’s a Marvel movie of a book: it has a theme, and heroes and villains who develop that theme, and a lot of clever bits. Hell, there’s even a coded poem at the back of the book for you to solve, like an Easter egg for the mega-fans (not to mention that the name Cat Agatta is comprised only of the four letters that are shorthand for DNA nucleotides: A, T, G, C). The heroes are all worthy and a bit quippy, with physical distinctions that give them that almost-archetypal quality. The villains are evil corporations or monomaniacal geniuses obsessed with imposing their vision on humanity. It’s all very streamlined in an appealing if very familiar way.

But familiarity is no cause for contempt. There are bound to be thousands of readers looking for something to tide them over until Infinity War: Part 2 or extend the blockbuster season now that Ant-Man and the Wasp is out of theaters. And now with This Cruel Design out, there’s a lot of action to keep you satisfied.