Thank the YA gods for terrible parents.

Terrible fictional parents, that is. Because much as I wish there was not a single terrible real-life parent, there are far too many. But there haven’t been many in fiction until more recently, and not only is that unrealistic, it’s a damn shame. There is so much depth to be explored here, and the topic is such an important one for young adults (or YA geeks like me) to grapple with.

Oh, there have always been rotten step-parents (Ella Enchanted, every fairy tale ever) and devilish guardians (Series of Unfortunate Events, Harry Potter, every Charles Dickens novel ever), but terrible parents are actually rather rare. About the worst I ever saw growing up was C.S. Lewis’s smug rendition of “modern” parents in The Voyage of the Dawn Treader, which still enrages me every time I think about it. Otherwise is was orphans upon orphans with saintly dead parents. Take the Boxcar Children, whose cheerful indifference to their own plight had them playing house and solving mysteries, bootstrapping themselves out of sadness not like children, but like miniature adults (and rather one-dimensional adults at that).

Look, I’m all for presenting things to children in an age-appropriate way. What I don’t support is sanitization. Children are going to learn that the world is not always a good place. Many of them know it already, whether because they’ve experienced problems at home, at school, or elsewhere. Young adults are especially aware of the unfairness of the world, and are at an especially vulnerable as they try to make the transition between child and adult. That’s why we particularly need stories like This Raging Light to insist that, even in the loneliest, most difficult times, no teenager (or person) is alone.

Even though Lucille, raging protagonist, might as well be. She has her 10 year old sister Wren, sure, but her dad went away a while ago, and her mother goes on a “vacation” that turns into complete abandonment right around the time school starts. Lucille is left with bills, crushing despair, and not much else. She doesn’t want to be thrown into the system and separated from Wren, so she decides to hide the fact that she, a high school senior, has decided to keep them both afloat.

The only people she has are her best friend Eden, an aspiring ballerina with a tough streak and a pack-a-day habit, and Eden’s twin brother Digby, her secret crush. She doesn’t need the added stress of romance, of course, but fear not, both Lucille and Estelle Laure know this. This isn’t some sappy nonsense about how teenage love conquers all, complete with bad poetry. No, there’s good poetry, and love that complicates all (for good and bad). 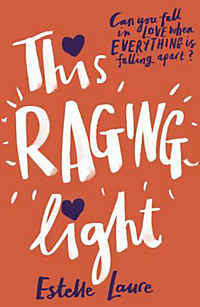 In the midst of her supremely ill-timed swooning, we learn more about her parents’ crumbling relationship and Lucille’s strength in the face of it. It’s nasty, unpleasant stuff, and Laure doesn’t flinch from it. She doesn’t flinch from anything. This book is Truth with a capital T from beginning to end. There’s a scene in which Lucille, exhausted and overwhelmed, comes home to find that someone has stuffed their pantry and fridge with groceries. Instead of joy or relief, she becomes intensely angry. And you know what? That’s exactly right. I remember a devastating time in my own life when someone gave me an anonymous little gift, and my first response was to be furious and suspicious and afraid. Because when you are trying to hold it all together and someone cheerfully demonstrates how much better they’re doing, it makes it very clear to you that you’re not fine. Not at all. And that brave face you’re putting on isn’t fooling anyone, even though you were really hoping it would fool yourself.

Insights like that are plentiful in these less-than-three-hundred pages. Laure seems to have stripped out every extraneous word and thought, because this is one lean, mean heartbreaking machine. Every sentence is packed with brilliance and beauty and fury. I stayed up way too late and cried way too hard just so I could take it all in. I haven’t done that since The Fault in Our Stars. There’s sorrow and trauma, but there’s also incredible strength and kindness to be found if you let this book break you. Everyone is a little broken anyway. This book will not let you feel broken alone.