Untwine is the kind of book that must be read in installments. Not because it has Dickensian chapters; it actually flows so naturally from page to page, story to story, that it really should be read in one long afternoon. But at least for me, that was impossible. It was too heartbreaking.

Giselle and Isabelle are identical twin sisters, teenagers trying to forge both separate and united paths through high school and the rest of life. Giz is an artist and Iz a classical musician, a flautist. They move in different circles, have different crushes and different heroes, but are still each other’s best friends. They have the same fierce sense of justice, the same love for cathedrals and their native Haiti, and they even share the same dreams. 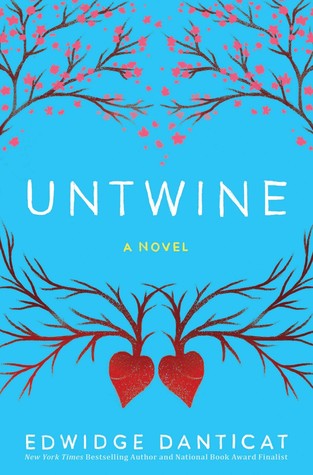 In an instant, those dreams are in tatters. The car accident leaves Giselle–or maybe, just maybe, it’s Isabelle?–in a waking coma like a lucid dream, able to see and hear some of what’s happened but unable to communicate. She sees her parents, who before the accident were preparing to formally separate, both together and apart. She sees her aunt, her uncle, her grandparents…but where is her sister? Then come the police, bringing dark hints that it wasn’t an accident. But what can Giz do when she’s barely able to move? When she doesn’t even know how to grieve or cope with a world without Iz?

Who could possibly bear this much sorrow?

Edwidge Danticat could. She sounds like the magnificent headmaster of a Hogwarts rival school, and she should be. She is a wizard, and she casts the most devastating spells. It’s not just bedside weeping–this isn’t some Walk to Remember or even If I Stay (I’m not equating those two, by the way; only one is garbage)–it’s the small and dramatic motions of grief and coping: of standing up, of taking first steps, of saying first words. And then the next steps, the next words, making a story from and in spite of another story’s end. Into two girls’ lives she weaves notes of the Haitian-American community and language, Haitian history, meditations on relationships (both teen and adult), religion, social justice—you name it and this book has it, but so integrally you could never mistake it for anything but Isabelle’s and Giselle’s story. It’s a marvelous, magical brew.

It’s incredibly brave to write a book like this. Going so deep into the love and grief of another human being–even a fictional one–is no easy task, and Danticat does it with such unspeakable tenderness. It’s one of the most intimate and truthful portrayals of grief that I’ve seen, encompassing the absurdity and kindness and violence and emptiness and a hundred other things about it. I had to pause in reading not just to cry, but to copy down passages that were just so real, and really just so beautiful.

Reading this book was like being in orbit around it. It was impossible to get too close all at once, but impossible to escape. It’s a warm and wonderful star, and I am very grateful to Danticat for writing it.