Taiwan of the future is a great place to be–if you’re rich. In fact, the world is a pretty great place in general if you have the cash–but if you don’t, the world is even worse than it is today, with new diseases, tainted foods, and toxic air and water wearing down the population. Life expectancies among mei citizens is only around 40; for the you class, not only is life long, it’s rich in every sense of the world.

The distinction between mei and you drives the book; it’s also conveniently coded for English speakers as “me” vs. “you.” The rich are Other: it’s the only distinction that seems to matter in Pon’s highly globalized future. The main character, Jason Zhou, and his friends are of various nationalities and races, but in Taipei they’re all the same, have-nots trying to scramble for the scraps of what the haves leave behind. 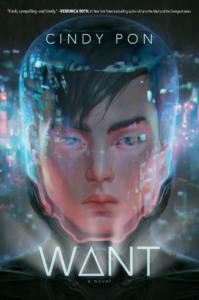 It’s a simplification, of course, but it doesn’t mean the book or the subjects it does address are simple. Pon manages to capture the essence of the divide with admirable finesse. She paints environmentalism as a failed trend that wasn’t cool enough to maintain commitments from the rich, who now simply remove themselves from their environments. It’s fairly scathing, but the book is not just a political indictment wrapped in a pretty cover (although the cover is pretty. How amazing is it to see an attractive Asian man on a YA cover!?). It’s really about five mei friends who want change, and who are working as hard as they can to make it happen.

Despite being mei, Zhou and his friends aren’t without skills. Victor is a shady dealmaker; Lingyi is a hacker from a disgraced family; Arun is a researcher; Iris a fighter; and Zhou himself has had access to high-class education before he was orphaned. This is a good insight about such a polarized society: even those who might be considered “middle class” in another world–those with stability, some comforts, and education–can’t really be a part of the you world. The gulf is too wide to ever really cross, no matter how much hard work or talent a mei puts in.

Yet as Zhou discovers, not all the ultra-wealthy are empty-headed trend-chasers. They are trying to help in their own ways, studying medicine or making large donations to charity–but Zhou feels it isn’t enough. This is the quandry we all face: how much do we give up to make a better world, and in what way? Do we need radical change, or gradual? Collective contributions or individual? Will the change be social, or is science the only way? And do people even want true change when it’s presented to them?

The answers that Zhou finds are ultimately optimistic ones, although not easy or without cost. Biologist Arun and his activist mother Dr. Nataraj deserve to be celebrated for their contributions, but it’s the shallow you Angela and many others like her who gets to romp around the parties celebrating little more than wealth itself, like a mirror reflecting another mirror into a vapid infinity. Mei crave Angela’s bright, flashy life; it’s little wonder that Dr. Nataraj’s murder goes relatively unnoticed. The unfortunate doctor is murdered for advocating on behalf of the environment and the mei. So when the police won’t–or can’t–do anything, it’s up to her biological child and her adopted ones to take up her cause.

However, they decide that her legal methods aren’t enough. Illegal antics are needed. Specifically, they’re going to use a combination of kidnapping, extortion, impersonation, theft, and very, very large explosions to bring down Jin Corp, the richest company in Taiwan led by the richest man in Taiwan. By destroying the means of manufacturing suits–which protect wearers from pollution and disease–they believe that Taiwan’s wealthy will be forced to reckon with the environment and unequal society they have created.

Ironically–and perhaps intentionally, though I hesitate to give credit here since it actually detracts from the narrative–Zhou and the gang use their kidnapping money to get whatever they want. Brainwave scanners, wall-climbing gear, brain-wiping drugs…it’s all available to them, even before it goes on the market for yous. They don’t have to be cleverer or more capable than their opponent. All they’re really doing is parrying money with money. Sure, the hacking and the subterfuge takes skill, and nano-virology is nothing but skill (I get that he’s a child genius in a fantasy world, but eighteen year olds who want to cure all viruses and who get their own labs in national research universities strain credulity, even if their mothers work there), but we don’t see that. We see that most of the challenging aspects of this are overcome with their 300 million payout. This was apparently a sum that Daiyu’s mother or father could pay–immediately, and without apparent repercussions to their lifestyle–but also one that allows them to gain unfettered access to both black market tech and the you lifestyle. We don’t have a very good grasp on exactly how much money this is, relative to the wealth or poverty of others, and it eventually becomes suspicious. Why don’t they run out of cash? Perhaps it makes a difference that they’re using the goods to change the world, but it still wears the narrative thin after a while. This could have been Ocean’s Eleven, or Six of Crows, but Pon relies too heavily on futuristic technology and unlimited cash to fill in the gaps between you and mei instead of her characters’ determination and wit.

I criticize because these characters do seem to have both determination (which comes out in the action) and wit (though there isn’t enough banter). The tone is casual, almost conversational between the narrator and the reader, although the audience is never directly addressed. The plot jogs along, touching on technology, politics, and romance without ever slacking on the action. The romances in particular are quite lovely and understated, a bit of a surprise for a YA book. I’m so used to obsessive self-interest that the steadfast devotion to the mission is refreshing. (I also want a book entirely about Lingyi and Iris.) What good is romance when your country and your people are dying? You need more than love survive, after all–but love is worth living for and dying for, love of your friends, love of your sweetheart, and love of a still very cool future Taiwan.