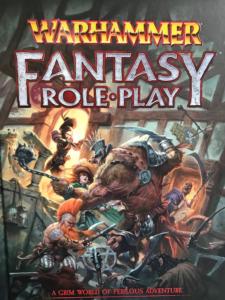 My introduction to Warhammer came around 7th grade, when a friend showed me his codex for his Skaven army. It was full of great artwork, lore, and rules. The idea of a tabletop game, specifically one dripping with a rich story was new to me. A couple years later, I would be introduced to Warhammer 40k at a Games Workshop store, where I ended up buying an introductory set with Space Marines and Dark Eldar armies. I played a little, hosting my friends at my home to play on a ping-pong table turned arts and crafts station, and I even painted a few miniatures, but it was not a cost effective hobby for a youth, so I dropped it fairly quickly. More recently, I got into playing the Vermintide games, a Left 4 Dead style game, where players would take on the role of heroes in the Warhammer Fantasy setting to battle through Skaven ratmen armies and agents of Chaos. I was even inspired to buy some Skaven minis just to paint them.

All that is to say that my renewed interest in the world brought me over to the Cubicle 7 booth at PAX Unplugged this year, where they had a display of the new Warhammer Fantasy Role Play (WFRP) Fourth Edition rulebook. Cubicle 7 itself has been focusing mainly on Lord of the Rings and Doctor Who RPG franchises of late, but has been working to build out their Warhammer Fantasy system as well. The rulebook itself was released in early December, encompassing the full ruleset, including character creation, combat, earning income, religion, magic, and even how to buy prosthetics for your amputated body parts. A starter set was just released as well; featuring an abbreviated ruleset, an adventure, pregenerated characters, and a couple d10, essentially everything you need to get going and get a taste for what WFRP has to offer.

The system, in its current state, focuses on The Empire, a human civilization going through a sort of cultural and economic renaissance. To support the world, the rulebook is filled with lore about society, religion, geography, and history, providing players and Game Masters with the tools to flush out the characters and the world they live in. Character creation itself is a fairly involved process, made a bit easier with added mechanics and benefits for randomly generating a character’s species, characteristics, and class/career. This speeds up character creation by helping the players from getting bogged down from choosing amongst the 64 possible careers that are in the book.

So, what sets WFRP apart from other systems?

The World: Being built on an existing IP provides a very flushed out world for players to explore. The Riekland is a dynamic country, filled with adventure and opportunities for adventurers to explore.

Social Status: Each of the 64 careers is tied to a social status ranging from the lowest rung on the ladder, earning pennies a week, to the head of a noble house, where money is not a concern. It may sound more appealing to just start life as a noble, but within the game’s structure, nobles are also required to fill the role of a noble, hobnobbing amongst the upper crust, spending their money to support their lifestyle and keep up appearances, and of course, making themselves targets for cutpurses, assassins, and political slander. Beggars are able to move through society unnoticed, only needing to spend a few brass pennies to maintain their lifestyle and being much more available to the adventuring life.

Crunch: This game is crunchy. The rules are fairly intuitive, but there are a lot of them. Passing skill tests is not simply beating a number, but by how much and difficulty can vary wildly. Combat can be devastating, with a very real chance of death when an enemy critically hits you or you fumble your own role. Magic is dangerous for the user and their targets. Luckily, the rules also include build-in mechanics to allow players to re-roll, automatically succeed, and even avoid death, but at a cost.

Advancement: While experience is earned similarly to other systems and a total earned is kept track of, it is also spend to improve skills, characteristics, buy new talents, and even move up in society or start a new career altogether. This mechanic makes early characters advance, even incrementally, after each session, and allows players to develop their characters very specifically to in a way they want.

So what’s the verdict? I’ve read through the whole WFRP rulebook now and I was left wanting more. There are two sides to this, one being that I became invested in the world and want to explore more of it and the other side being that I wished there was more. Like other games, having a grounded, centralized world is a nice start and I imagine there will be more coming down the line, specifically breaking out the the Empire and into elven and dwarven worlds, but that does not exist for this edition yet, nor does there seem to be an announcement for new content. Additionally, while the rulebook include a bestiary, it doesn’t have too much to work with, again focusing on threats within the Empire. The hardback version of the book with a digital copy runs for $60, or just a digital copy on DriveThruRPG running $30. The starter set runs $30 for a physical and digital version with the digital only going for $15. After finishing the core rulebook, I ordered a starter set and picked up some free supplements on DriveThruRPG, because I really think this is a system worth exploring and seeing how a published adventure runs will probably give me a better idea if I want to continue to invest in the system down the line.

If you are interested in the random character generation, I ran through building one and recorded it here.